How My Son Became a Pescetarian

When Arthur was little, he couldn’t get enough of bacon and barbecue. Always a thoughtful and precocious child, it never seemed to bother him that it was meat…until one day it did.

Originally, I blamed Pokémon. But in retrospect, it was probably always coming to this.

It started with the sort of rambling queries seven-year-olds are stellar at, and I could feel the direction it was headed before we ever got there. “Mom, what do Pokémon eat?”

He sighed. “Well, some of them eat meat. But the only meat in the Pokémon world is other Pokémon. And grass-type Pokémon eat grass…”

Then later, “If Pokémon eat other Pokémon, they are eating intelligent creatures. That doesn’t seem right.”

He always dropped it, but then he’d pick it right back up in a week or so as if he’d been mulling it over. “Mom. I’ve been thinking. Everyone in the Pokémon world who isn’t human is a Pokémon, even grass-type and ground-type. Pokémon are basically cannibals because they eat other intelligent creatures with feelings…”

“…and then humans are animals, right? And we eat other animals. And some of those animals are intelligent and have feelings…”

This was one of those leading moments where it was clear I was supposed to fill in the rest.

Queue obligatory The Lion King quote about how the antelope eat the grass and we eat the antelope and we are all connected in the great circle of life. That’s right, kid. Eating meat is a noble, ecological act engaged in by the likes of Simba the Lion. Now finish your meatloaf.

And friends, for a while, he was buying what I was selling, still loving bacon and barbecue more than any Roe-Owen on Team Roe-Owen…until one day, he didn’t.

This time, the heavy sigh was mine. I found myself riffing desperately about human evolution and Neil Degrasse Tyson and science and protein and probably tying it all back into Pokémon. This time, he only pretended to be convinced, and from that point on he would push his meat around on his plate, pretend to not be feeling well, do anything he could to get out of eating animal flesh like those cannibalistic bulbasaurs and jigglypuffs.

More importantly, from that point on, I realized something was lost between us, something in the neighborhood of trust. He couldn’t reconcile his burgeoning seven-year-old moral sense with the worldview I was bent on imbuing him with, but he did not want to go against me or his father, so he went out of his way to try to ride the fence, and it hurt me to see this. For the first three years of his life, Arthur and I had been alone together most evenings while his Dad and I worked opposite shifts, and as it always is with a mother and her only child, we were thick as thieves. Even after Lucy was born and Noah came to live with us shortly thereafter, the two of us were so similarly-minded that we maintained a powerful connection, an almost telepathic shorthand, and to see that eroding was painful.

But the truth is, I also knew in my heart that even in the second grade, he wasn’t too young to know his own mind and that he hadn’t come to his decision lightly. Arthur has a weight about him that’s always been there, a depth of mind and conscience, and I knew he had listened to what I said about our bodies and health and was still deeply troubled in his spirit, and I also knew that he was old enough to know many people live healthy lives without ever eating meat. 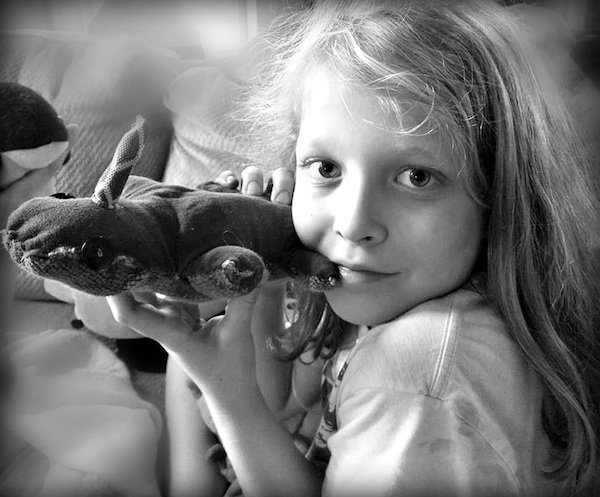 Arthur has always been an animal lover.

His dad was initially more dismissive about this than I was, demanding Arthur eat all his food because like me, he had seen the Internet horror stories about children of vegan parents getting admitted to the hospital while the parents were jailed, and anyway there were children starving in other parts of the world. But somehow hearing my husband begin to merge into an 80s parenting stereotype was the jolt I needed to wonder if I wasn’t being a little too hard-lined on this, so of course, I did what any clever Xennial-cusp mom would do: I crowd-sourced it.

What’s on my mind? “Facebook family, what are your thoughts? My 7yo wants to be veggie.”

The responses were varied, but I was surprised at how many parents admitted their own child had gone through this phase. “This phase–” what a beautiful phrase! Set phasers to stun! We had a parenting win.

“It’s just a phase!” I happily declared my findings to my husband, laying out a plan to cede to Arthur’s wishes without disrupting the family too badly. Because he’s kind of a grumpy man, Justin protested a little, but because he’s also a good man, he listened to me and agreed to it.

When we sat down with the boy, we told him we had talked things over and were willing to let him give up meat, conditionally. The conditions were as follows:

The last request was a matter of practicality. At the time, both parents were still working completely opposite work schedules–me during the day, Justin at night–and often we only saw each other when we exchanged kids and car after school. We were new to all of this and could not imagine a way to be sure we could easily prepare meals on the reg without being able to offer some form of animal on the menu.

I managed to convince the boy to eat fish by telling him that they were not as intelligent as many mammals, by my own admission a bit of an outright lie. In fact, my good friend V swears her goldfish went through a clinical depression after a recent move. Friends, I implore you to judge not my flexible morality lest ye be judged. Importantly, Arthur agreed to all of it.

(About a year later, I overheard Noah letting the ugly truth about fish brains drop before I could shut it down. “I know it,” Arthur half-growled under his breath. “We just pretend like it isn’t the case and never discuss it.” It was a beautiful moment. My son had discovered moral compromise, the foundation of human civilization. After all, fish don’t typically hug their friends.)

We made the appointment and spoke with Arthur’s doctor about his diet. I was surprised at her response, but it made sense. She told me if his diet was well-rounded, he should be able to get all the iron and protein he needs from non-mammalian sources, but if we gave him a multivitamin just to be sure, we wouldn’t have to worry at all.

Here’s the thing, friends. It’s two and a half years later, and as it turns out, it wasn’t “just a phase.” Arthur has educated himself more fully on the benefits of pescetarianism; after an initial struggle with public image (early on, a teacher told him “pescetarianism” isn’t a real word), he has accepted it as part of his identity and he takes pride in it.

I won’t lie. It’s been an epic pain in the badonk. It only took his dad about 7 months to stop asking him to just please try the chicken. We figured out PDQ that if, in a moment of parental exhaustion, we end up at McDonald’s, it’s way cheaper to order a burger with no meat extra cheese (that’s a cheese and pickle sandwich, y’all) than it is to order a fish filet sandwich (although he loves those suckers). When we have pizza, there’s always a cheese pie. And for the most part, we’ve all been a little flexitarian since then, which means until our schedules recently aligned (and the gates of heaven opened), we were all basically super over tuna casserole.

But Arthur dutifully ate everything we put in front of him, and that first year and a half, I managed to drop 40 lbs. of post-Lucy weight I had been hanging onto without really trying. That’s almost a whole Lucy’s worth of cellulite for you mathematicians out there.

I’m not here to tout the healthy lifestyle of pescetarianism, and I’m surely not promoting an anti-meat agenda; I could basically devour a medium rare ribeye at a moment’s notice. But somewhere in this, there’s a lesson about finding middle ground together in the heart of the family. That and never underestimate the value of selective perception.

And just in case you’re still worried about Pokémon food sources, rest assured that for the most part, these guys retain their HP through a steady diet of weird, non-cannibalistic poké-foods like poffins (don’t ask me what they are), honey, berries, poké puffs, and poké beans.