On October 30, I had the opportunity to attend “Love Never Dies,” courtesy of Celebrity Attractions. Going in, I knew nothing of the plot except that it is the sequel to “Phantom of the Opera,” and the Phantom manages to lure Christine, Raoul and their son, Gustave, to Coney Island. Also, Raoul and Christine’s marriage is not altogether happy, as he has become addicted to both gambling and alcohol in the 10 years following the events of “Phantom of the Opera.” In fact, the only reason they come to America is because Christine has been offered a large sum of money by Oscar Hammerstein in exchange for singing at his new opera house–money the family desperately needs to pay off Raoul’s debts.

I’ll try to keep this review spoiler-free, because honestly one of the best parts of attending “Love Never Dies” was listening to all the chatter during intermission–the majority of the audience members, I would say, were as clueless as I was about the plot, and there were unresolved plot points at the end of Act 1 that it gave everyone a lot to speculate on as far as what would happen during the second Act! I think maybe it’s kind of rare that you’d go to a Broadway production (at least for me) and really not know what’s going to happen. The last two performances I attended were “Sound of Music” and “Wicked,” and although I’d never seen “Wicked,” it had been around long enough that I’d listened to the soundtrack several times and felt pretty familiar with the plot.

After the performance last night, I got home at ten-thirty(!) and couldn’t sleep for awhile because I kept thinking about the musical and pre-writing this post in my head! So my thoughts last night were: 1) Don’t walk into “Love Never Dies” expecting a satisfactory, female-empowering ending. You are NOT going to get it. 2) Do walk into “Love Never Dies” expecting incredible scenery–the sets were so much fun! As the musical centers around a Coney Island circus/”freak show,” there is of course a riot of glittery, carnival lights and inventive, even disturbing scenery that makes the show worth watching, even if the characters themselves are somewhat infuriating (and I do mean, INFURIATING!). 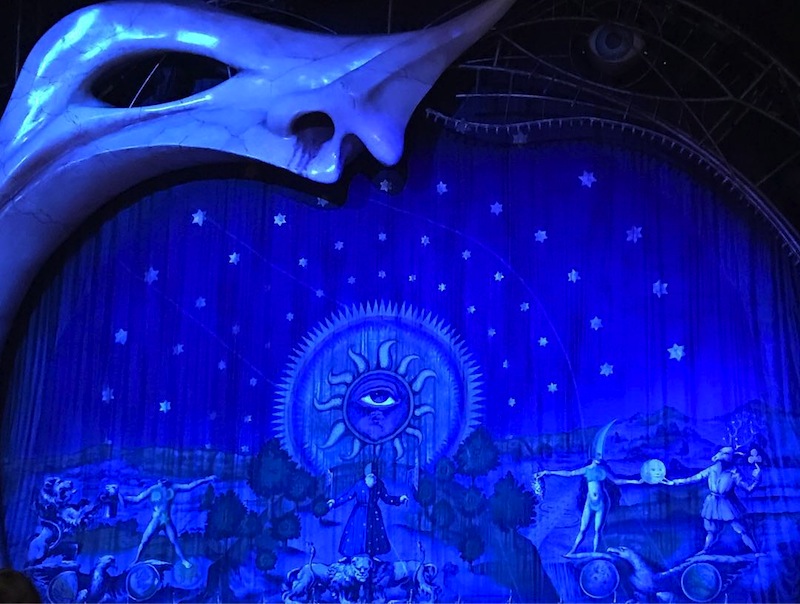 My favorite song, both because it has a rocking beat and the most bizarre set pieces, is “Beauty Underneath.” In this song, the Phantom takes Young Gustave on a tour of the underbelly of the Coney Island circus. On stage, you see about five tall, narrow pyramids that alternate between having a reflective, mirror surface and a clear surface, which reveals a variety of “freaks” trapped inside, from a mermaid to a man with long, curling fingernails. These pyramids rotate around the stage, and of course there is a lot of other things going on, making the entire song dizzying but really energizing–Plus, the whole time, you are afraid for Gustave. Is the Phantom going to corrupt him? Kidnap him? What’s going on?! It’s downright unsettling, to be honest. But also pretty cool, since thankfully it’s just a stage show.

As far as my other point, the infuriating thing is that Christine is essentially forced to choose between loving, on the one hand, a man who blackmails her with the threat of kidnapping her son if she doesn’t sing for him (and who has been obsessing over her for over a decade), and a man who is trying to drown his self-pitying sorrows, whining, “Why does she love me?” while spending an entire night at the bar instead of just showing up and being a decent husband/father. These men both idolize and manipulate Christine, and, for some reason, she loves them both and feels genuinely torn between them.

In the writing podcast I like to listen to, they frequently talk about how important it is that a character have “agency”–that they are active, rather than passive. Christine is pretty darn passive, and…well, if you watch the show, you’ll see how that ends up for everyone!

In my other Broadway reviews, I’ve tried to focus on a few lessons learned from the production, but I think all of the lessons you’d learn from “Love Never Dies” involves what NOT to do: namely, DON’T spend your life obsessing over someone, whether or not they love you back, DON’T spend your life trying to capture the attention of someone who is never going to love you the way you want them to, and DON’T ruin your life because you think that the person who loves you is “so far above you” that you’re unworthy of their love. Come on, people. None of this is love.

But regardless of my strong feelings about certain elements of the production, I’m so glad I got to go. It really is a gorgeous spectacle that will keep you intrigued and guessing. Plus, I’ve been singing the music in my head all morning 🙂 I wouldn’t say it’s a production for young children, despite the presence of young Gustave–there are scary moments and pretty adult themes, as you can probably tell! If you’d like to purchase tickets to any of the upcoming performances, you can do so here. If you do go, please let me know what you think! What were your favorite songs/moments? How did you feel about the ending (don’t forget to include spoiler warnings!)?

P.S.–I realized after posting this originally that I should have mentioned how amazing the cast is! Just because I didn’t care for the characters they played didn’t mean they weren’t incredibly talented!! And I was thinking that that’s the beautiful thing about the final curtain calls–even if the characters have been showing their disdain and even loathing for each other the past couple of hours, when it’s time for the final bows, they all come together, hold hands, and you are reminded that this is actually a very supportive group of people (with gorgeous voices!) 🙂