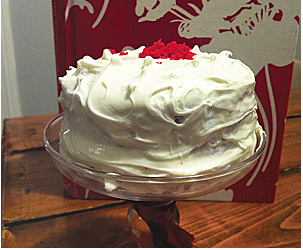 I have always been enchanted with velvet. When I was younger, it was the fabric of my desire. It was undeniably fancy, came in a multitude of jewel tones and, most importantly, it was a wardrobe staple for royalty. To a child it seems extravagant, which is probably why I loved it so much.

I actually have three “velvet” loves. For the longest time my grandparents (on my father’s side) owned a mid-century lime green, velvet loveseat. It was tufted, tiny, and my favorite couch to read and take naps on. Actually, it was my favorite couch ever. I always knew that someday I would inherit this piece and we would live happily ever after. That was the plan. The day the couch was finally given away, I already had a fairly nice one and no extra space for a loveseat. Forgive the pun, but not having this velvet beauty crushed me. But it stayed in the family. My brother, Sam, had also expressed an interest. He got the couch and it now lives in Idaho. It’s safe to say I’m green with envy. I miss it, need it, and someday will own a velvet couch, although maybe not in lime.

Let’s talk about Lou Reed and The Velvet Underground. They became a part of my life when I met my husband 10 years ago. I can remember always seeing their albums in record stores (when those existed) and found the group’s name so intriguing. Who was this band? Jeff introduced me to them and to their legendary relationship with Andy Warhol and the model-turned-singer, Nico. All these years later, I still love them and listen to them all the time.

Now for my last velvet love, the Red Velvet Cake. It’s a legend, a classic. It has a history that this article’s modest space does not allow me to fully expound upon. That’s probably good, because I could go on for awhile. The first time I had it, my mother made it as a special Valentine’s Day surprise. She baked it, cut it into the shape of a heart, and then covered it with thick, white cream cheese frosting that I can still remember to this day. It is a bona fide “eat memory” for me. The cake itself is magical and decadent just like the fabric from which it’s named. Rich, complex and such a deep red color that it stays with you on your fingertips for days.

Valentine’s Day and Red Velvet Cake, a match made in Heaven. Share a piece (or two) this month with someone special!

• 1 lb of cream cheese softened
• 1 lb of unsalted softened butter
• 2-3 cups of powdered sugar
• 2 tsps of vanilla
• 1 tsp of salt.
Mix together and use to frost your Red Velvet Cake.
Categories: Food