The Myth of the Failing Teacher

“Be honest. Would you give up your union protections for a decent raise?” the man asked me at a party several years ago. He was the parent of three of my students. I knew what he was getting at: He believed unions protected bad teachers. At the same party, another man opined that a certain amount of “churn” in the Tulsa teacher force might be a good thing. Since that time, I’ve been elected to the Oklahoma Legislature where I’ve heard a few more opinions about teachers. “If civics teachers did their jobs, we wouldn’t have violent demonstrations in the streets,” argued one legislator, while proposing a bill to make the citizenship test a graduation requirement. Then of course there was the debate over HB 1775, a bill banning teaching anything that might make students “feel guilty” about American history. Underscoring the debate was the argument that “Marxist teachers” were indoctrinating their students. Three years after the historic teacher walkout in which parents and communities came out in favor of a raise for educators, the tide was again turning against teachers – or at least – the teachers we don’t like.

It’s true there are bad teachers, just as there are bad lawyers, bad Uber drivers and bad everything. I taught in Tulsa for 20 years, and I had moments I’m not proud of. But a myth is being generated – the myth of the bad teacher – for a specific purpose. It empowers a line of argument that we need to reform public school systems in ways that make it easier to hire and fire teachers. Other fields don’t have labor protections, so why should public education? Charter schools, voucher programs and the Governor’s distribution of federal relief funds have all moved more dollars and students into schools without negotiated labor contracts. All this, despite the evidence showing that most people with children in schools like their children’s teachers.

The biggest problem with this line of attack, though, is the looming teacher shortage. Two thousand veteran teachers retired this year – double the usual number. Partly, this was because of the 2018 raise, which incentivized eligible people to retire after three years of higher salaries. Only about 1300 students are currently enrolled in teaching colleges. Not all of them will graduate, and many of them will go out of state. So we’ll rely as usual on alternatively certified and, increasingly, emergency certified teachers. Last year we certified over 3,000 in the latter category, and we have every expectation this will continue.

The myth of the failing teacher is dangerous because in this climate we can’t replace them. We’re desperate for people to fill those classrooms. And this doesn’t just apply to public schools. Private schools often rely on the public-school teacher workforce for recruits. The diminished numbers in our teaching colleges are the canary in the coal mine for the whole system, public and private. If we harp on bad teachers all the time to serve an agenda of education reform, we may break down the system without having an adequate replacement for it.

Where will we be when the last veteran teacher walks out the door? 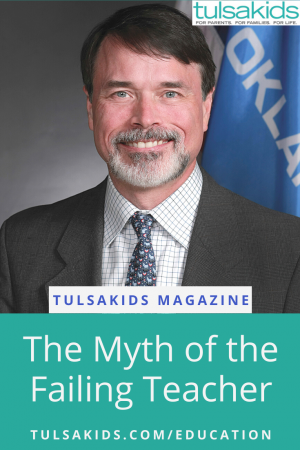