The Myth of the Failing School

There’s an old saying: “Legislation is like sausages. It’s better not to see them being made.” One of the reasons for this is the ingredients. Sometimes, a law begins with bad ingredients. We see a lot of this in education. One of the basic ingredients in much education legislation is the myth of the failing school. It goes like this: students, especially Black and brown students, are trapped in bad public schools that don’t meet their needs. This message is sustained by an A-F report card system that uses a particular set of data to highlight particular problems.

For example, it uses “chronic absenteeism” as one of five progress indicators. Chronic absenteeism is a much greater problem in poor neighborhoods, where families might face greater problems with housing, transportation, health and trauma. A poverty map of Tulsa shows a close correlation with low-performing schools. In recent years Oklahoma City had no A schools, while more affluent Edmond had no F schools.

The Problem of Inequity

Now, it’s true that inequity is one of the greatest challenges facing our public school system. Income disparities are at the highest levels in a century, and persistent problems of racial injustice weigh heavily on all American institutions. These problems are reflected in our public schools, which are obligated to take every child and meet their needs every day. The A-F system does a better job of showing the problems than it does addressing them. That’s because there’s only so much schools can do with the problems children bring with them into the school building.

My wife Krista, for example, works with students who have been involved in the criminal justice system. Many are products of multi-generational trauma and face massive barriers to advancement, including juvenile and criminal records. When I taught at the more affluent Booker T. Washington High School, one of my jobs was to help students get into the best colleges. Her job was often focused on keeping kids from going to prison. Both jobs are important, but should we be comparing her school to mine? Isn’t her job just as useful to society as mine was?

But this is one of the basic ingredients of much education reform these days. The argument goes that it is the schools that are the root problem, not the larger social conditions. These children need programs such as charter schools and vouchers to get them out of failing schools and into better programs. This of course means less investment in those “failing” public schools and continues a downward cycle.

The trouble with this approach is that the myth is simply a means to a desired end: opponents of the public school system find it a convenient way to justify their end goal, reduced investment. And even if private schools could expand to fit every child, would their models meet every need and serve every kid like the public schools? Would they, for example, provide busing, free lunch, special education services? Or would they screen out students or expel kids who didn’t fit their model?

This year we have seen a number of education bills advancing through the legislature. SB 783 allowed for “open transfers” under the argument that parents should not be trapped in failing schools by their zip code. But it doesn’t provide transportation, so only students with means will be able to benefit.

HB 2078 changes the funding formula under the argument that “the money should follow the child.” But by reducing the planning time schools have to adjust for population shifts, it makes staff hiring much harder for rural and urban schools with declining enrollment. It was argued in committee that we shouldn’t reward failing schools, but what this will do is reduce investment in our most stressed school districts.

We would do well to consider policies that deal with the root problems: investments in public housing, expansion of health care access including mental health, criminal justice reform and raising the minimum wage.

Kids dealing with evictions, addiction problems in the family, criminal records and difficulty affording food and clothing are just as valuable as every other student, but face greater challenges. Children in poverty are much more likely to succeed if we remove the day-to-day institutional barriers holding back their natural development. But we continue to blame the schools themselves because it helps us avoid looking at the problems of inequity in our own society. And that’s a shame. Maybe it’s time to reexamine the myth. 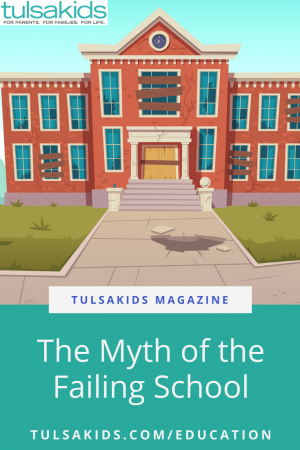