“Tickling is a form of touch that is often done under the guise of fun. It can be an acceptable interaction, but it can also be carried too far and become harmful.”

I loved my dad. He was a great dad and grandfather, but a fight we had thirty years ago, when my daughters were preschoolers, remains vivid. We were visiting my brother, who is intellectually disabled and who, at the time, was having violent behavior issues. My daughters were afraid of him and with good reason. My father insisted they hug their uncle goodbye, and as my daughters fearfully clung to my side, I said, “No, dad, they don’t have to hug him.” We debated the point back and forth, one of the rare times I went against my dad.

My dad was angry, but I knew this was a crucial lesson in body autonomy. My daughters needed to know their bodies were their own, and they had the right to refuse the touch of anyone they didn’t want to touch them. I also wanted them to know I would always respect their choices and be their advocate.

Teaching your child their body is their own begins early and is a good weapon against potential sexual predators. Empower them to say no to unwanted touch, even if the touch is from a close relative or friend. Remember, it’s usually not a stranger in a dark alley we need to fear; 90% of child sexual abuse victims know the perpetrator, and 68% are abused by family members.

Tickling is a form of touch that is often done under the guise of fun. It can be an acceptable interaction, but it can also be carried too far and become harmful. These are some guidelines to make sure tickling stays in the fun realm.

In full disclosure, I have a negative history of being tickled, which does color my view on tickling. As a child, I was often the victim of an older cousin who took great pleasure in holding me down and tickling me until I lost control of my bladder. I don’t think there was nefarious intent, but it was humiliating for me and contributed to my lifelong need for control. I also trace my claustrophobia back to being held down during those extended tickling sessions. My mother witnessed these events, but she heard me laughing, so naturally, she thought I was ok.

Parents need to be aware that tickling is often used as part of the grooming process for sexual predators. Tickling is seen as a socially acceptable way for an adult to touch a child; predators use this touch to “test the waters.” Is the child open to touch, are there any adults who will step in and stop the touching? Tickling is viewed as a harmless touch, but for a pedophile, it can be a way to introduce touching through fun and pleasure and earn the child’s trust before they advance the molestation. This is not to say all adults who tickle children have evil intentions, but it is a common tactic some pedophiles use to gain physical access to children.

Mild tickling can be an acceptable form of play for parents, grandparents, and children, but follow the above guidelines and also make sure it is a gentle and short span of tickling. Stop occasionally to ask the child if they want the tickling to continue. Children do benefit from physical play, so consider a different form of roughhousing such as giving piggyback rides, flying them in the air, playing tag, or chase. I know there will be some who will use the tired logic of “we were all tickled, and we survived just fine,” but did we really? Ask psychologists about the damage excessive tickling can mean long term. We know better, so let’s do better for our kids and grandkids.

Give your children and grandchildren autonomy over their own bodies. Teach them about ALL their body parts to empower them with knowledge, never force them to accept touch or to give touch, and make sure they know you will believe them and be their advocate if anyone violates them. With these weapons, a child will be more likely to trust their own instincts and report any unwanted touch.

When I say goodbye to my grandson, I hope for a hug, but sometimes he’s too engrossed in play to do more than look up and say goodbye. Other times I get a kiss blown my way, but the times I love the most are the times he runs to me, jumps in my arms, and hugs me tightly! But the best part of those squishy hugs is knowing that it was his choice. 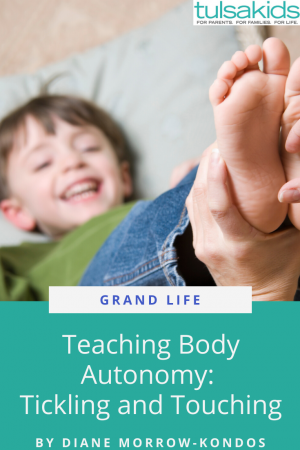