Taking it Outside: Families Learn Lessons from Nature

That, and other life lessons, came unexpectedly to the Palmer family during the pandemic shutdown. Ashley Palmer closed her business and was home full-time with Jack and his older sister, Caroline. With little else to do, Ashley’s response was to take the kids outside. 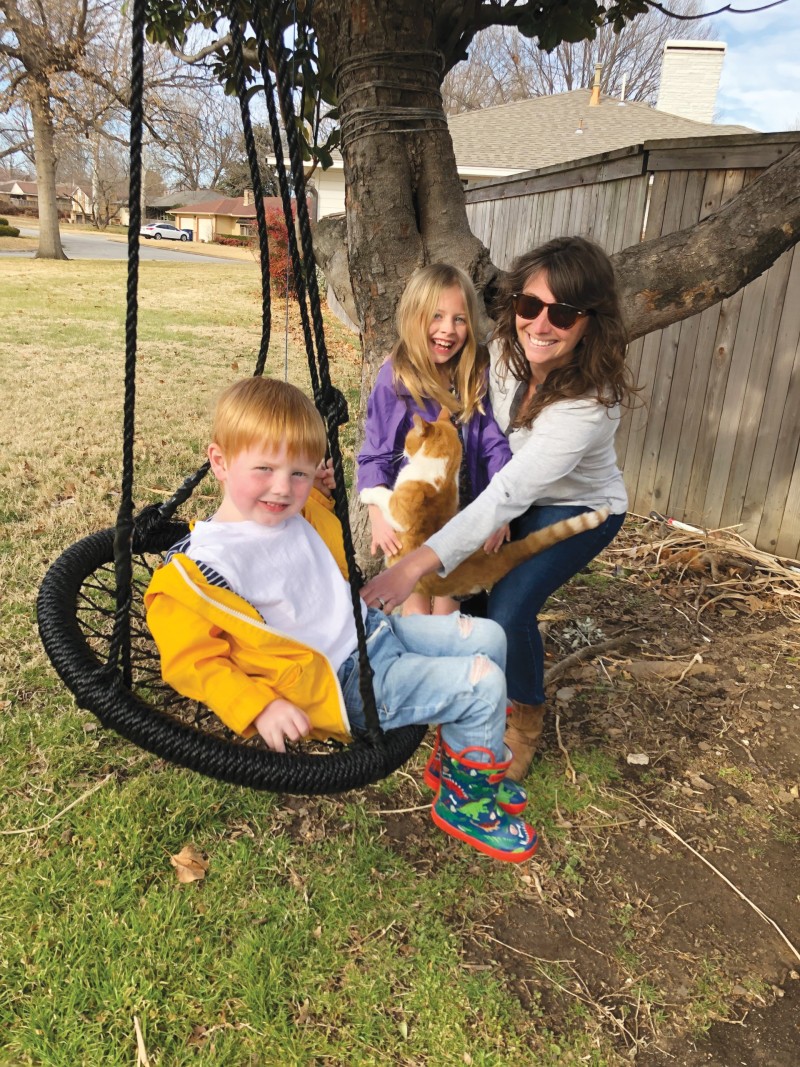 Caroline and Jack swing into Spring with their mom, Ashley Palmer

As their lifestyle slowed, Palmer says they began to notice more ordinary things, including the large magnolia tree that stood unobtrusively shading their driveway. Unable to go anywhere, they watched the tree day after day from their house and began to really see it.

“Without the distractions and activities, the tree became more of a presence, almost like a character,” Palmer says, “where we hung out, where we saw the birds that came by our house. We have a swing on our tree. Simple things. It became very interesting to see what was outside our own home.”

While she likes the outdoors, Palmer admits she is no outdoor expert, but she has enjoyed the shift in perspective that slowing down and spending time outside has given her family. She feels less pressure to take her children to activities or to find things for them to do. Sitting in the backyard doing nothing, planting herbs, observing their surroundings and enjoying unstructured time have allowed her children to experience life in a different way. They have learned the names of trees, birds and plants.

“If you can name something,” Palmer says, “it makes it more real to you and more valuable.”

She says that Caroline knows that butterflies like milkweed. She planted sunflower seeds and grew six-foot sunflowers in the front yard, and she knows to save the seeds and plant them again.

Ashley’s partner, Patrick Palmer, has his own outdoor activity. He is re-doing their garden in an effort to make it more eco-friendly.

“That’s really been Patrick’s project, but even as a beginner-level gardener myself, I’ve found tremendous joy just being part of the process,” Ashley Palmer says. “Through one of my own projects, I almost felt like not knowing what to do exactly made it even more magical. You don’t need to know a lot about the outdoors to have a great experience. We all feel better when we go outside,” she says.

Building a Relationship with Nature 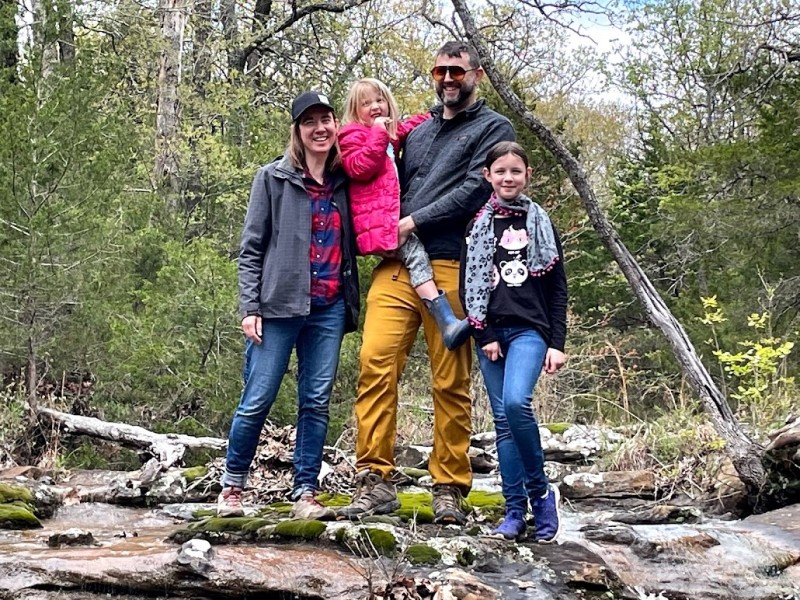 Margaritte Arthrell-Knezek knows well what children can gain from being outdoors. In 2016 she founded Under the Canopy, a nature explorer program that focuses on guiding children to observe natural surroundings in and around their own neighborhoods.

“Like everyone else, we definitely had to pivot in 2020,” Arthrell-Knezek says. “Last year, though, we went back to teaching in-person and centered on Oxley Nature Center. Each week had a different theme – survival skills, plants, mythical creatures!”

Her inspiration for Under the Canopy came from the book Last Child in the Woods, which suggests that the advent of easily accessible technology has made many people apathetic toward the outdoors.

Arthrell-Knezek recognizes that people may have barriers to keep them from enjoying the outdoors. Families without access to natural areas, or those who live in extreme climates may not be comfortable being outside. By meeting people where they are, Under the Canopy works to remove some of those barriers.

“We have access to hats, coats – they can stay outside longer if they have the right equipment,” Arthrell-Knezek says. “We are building climate resilience in Oklahoma due to our extreme weather. It’s a great place to learn how to handle these extremes.”

Arthrell-Knezek maintains that people generally enjoy the challenge of nature, despite how intimidated they may be initially.

“It’s never too early to learn, either,” she says. “In building a relationship with nature, even something as simple as sitting outside on a blanket is very calming. Just taking 10 minutes to regroup and stare at a tree instead of a screen – when you’re out there, observation is the key to getting you hooked. Noticing what birds are around you, what’s going on with the wind, what direction it’s going.”

Under the Canopy also educates kids on the importance of not littering, and there’s no better way to learn than by picking up the trash yourself.

“You’re told not to litter, but when you’re actually cleaning up a natural place that’s filled with plastic, you realize this is not OK,” she says. “I don’t think people consciously do it – they just don’t realize the effect they have on the world around them.”

In terms of what parents can do to foster their children’s appreciation for nature, Arthrell-Knezek suggests making a concerted effort and simply deciding “this is what we’re doing today.”

“There’s quite a bit of exploring to do in the Tulsa area,” she says. “You don’t have to go very far, either, as it really starts in the area that directly surrounds you. Go on a tree walk and count how many different kinds of trees are in your neighborhood. Try and go camping, too! It’s a lovely connecting experience.

“The pandemic actually opened a window to people – the value of being outside,” she adds. “After being inside for so long, that really brought more of an awakening to a lot of people.”

As a result, Arthrell-Knezek’s family made a weekly tradition of visiting a different, nature-heavy locale within two hours of Tulsa.

“Just kick your kids outside! That used to be an accepted parenting philosophy,” she says. “I struggle with it, too, but I think that actually makes a big difference. Lots of people tell me ‘When I was young, I was playing outside until sunset every day.’”

Gardening as a Family Activity 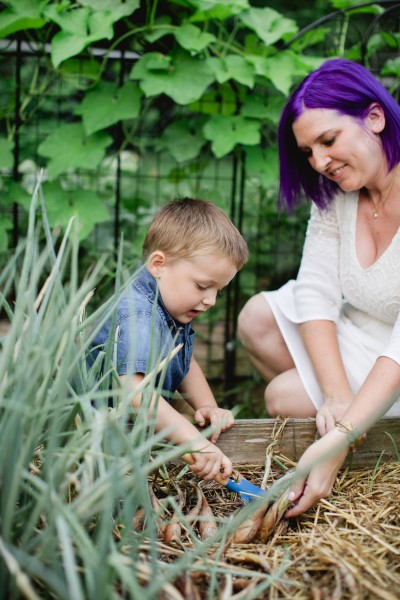 While Under the Canopy helps get kids outside, Tulsan Laura Koval founded AbleVeg, a business designed to help adults start and maintain vegetable gardens.

“Gardening isn’t necessarily easy – you need to have tools,” Koval says. “It was pushing people away – people who didn’t have the tools they needed. I created this company to fill that gap and help people be a point person on the subject.”

AbleVeg was established in December 2019. However, as Koval was in the middle of her first trade show, the surge in COVID-19 cases put an abrupt halt to the proceedings.

“Even then, people really took to gardening during the pandemic,” she says. “They started seeing that hole in our food system – we don’t have a perfect system in place. They needed a new hobby during those times. Fortunately, that interest seemed to stick. Not only how therapeutic it can be, but also how fun it is as a family activity.”

There’s something to be said about the work that goes into growing one’s own food, too. Involving children in vegetable gardening may make them more likely to eat vegetables.

“We were foster parents for a while and adopted two children right before COVID hit,” Koval said. “When we got our kids, they were 2 and 3 years old. They basically lived on fast food. Whenever mom would come home, she dropped off a bag of fast food. When they came to us, they just didn’t want to eat, as it’s pretty vegetable-heavy over here.”

Koval stressed that being out in the garden has been a game-changer for her kids.

“When they plant those seeds and see them grow, they’re proud of the work that they did. It gets them outside more, even when the weather isn’t ideal. They’re a great age to be little helpers. They’re really enjoying just being part of the process.”

Growing vegetables isn’t all, though. There are so many ways parents can get their kids involved around the garden. Filling a bird feeder, for instance, keeps them engaged and allows them to see the cause and effect of their actions.

“It’s so life-changing for kids,” Koval says. “It’s one of those life skills that we’ve let fall by the wayside, but once learned, never truly leaves us. I’ve seen firsthand how kids pick up on where their food comes from.”

For the Palmer family, the shift toward a life with more unhurried space and more connections to nature and neighbors will likely remain with them.

“I don’t know what will happen in the future,” Ashley says, but she enjoys the peaceful, contented feeling of “being with what is and where you are. It’s a good sense of belonging and community. We are nature. I don’t think you can really lose that. It becomes a part of who you are. It feels like a meaningful shift.”

Jack, at age 3, may not understand his statement that “life is a circle,” but the seeds have been planted. 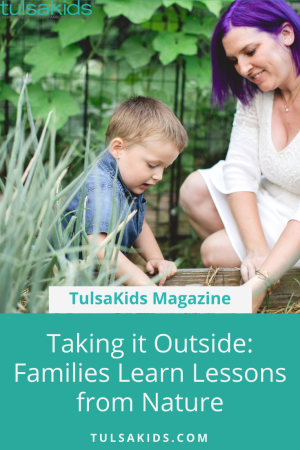