Summer 2022 is coming to a close, yikes! The past month has been such a blur, there were things I meant to blog about but never got around to. So here’s a summer wrap-up summary.

Toward the beginning of summer, I wrote about Joss’s summer camp schedule. He was signed up for the (free) TPS camp the four weeks of July. FREE camp – how could I say no? Plus, they offered something similar last year. The difference was, last year it was at his home school, with kids and teachers he already knew. This year, they combined four different schools at a different elementary. And almost none of the teachers from his home school were a part of it. I think they had like 500 kids in the building.

Anyway, drop-off went great the first day, but Joss came home kind of upset over a teacher’s loud voice. The next day, he didn’t want to go back at all. I waited with him in the office for about 30 minutes past the camp start time, while other kids kept coming in. The women in the office definitely seemed a bit overwhelmed/understaffed. Finally, I left Joss there, still a bit upset but figuring he’d calm down once I left, as per usual. Nope, about 30-45 minutes after I got to the office, I was called and asked to pick him up. They also said they’d be un-enrolling him because they couldn’t handle a student not wanting to go to class.

Thankfully, his counselor from his school was there, and helped calm him down, and they offered him another chance. So we made it through the next two weeks, but I got called back two more times to pick him up early. And after the first week, I ended up enrolling him him two smaller (not free) camps, just to be safe.

So that was a stressful two weeks! But he ended up in two camps that he loved, more details below. 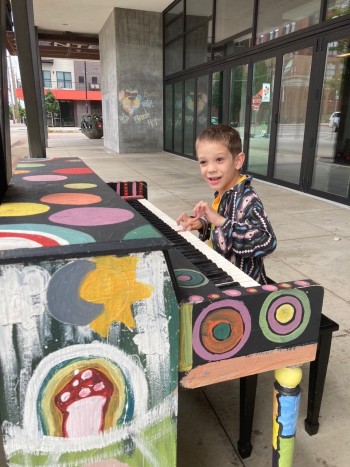 ahha had a great line-up of creative camps this year. Sadly, I don’t think they got their info pulled together until pretty close to the last day of school. By which time, probably a lot of parents had already finished their camp enrollment. Which was good for us because it meant they had space left – but unfortunate because I tried to sign him up for an afternoon camp as well, which they had to cancel due to low enrollment. So he was just there in the mornings. But his art teacher from school ended up being the teacher, and there were only about 4-5 other kids in camp, so it was very relaxed and friendly.

They did tie dye, mixed media self-portraits, played with LEGO, made stamps out of foam, etc. Best of all, it was between $90 and $100 dollars, so one of the cheaper camp options out there, even if it was just half-day. I’m thinking next summer I may need to do more half-day camps – if it ends up looking like I’ll have to sign up for not-free camps in July again. Not ideal, but gives him social time while saving at least a little money.

OK, so I was kind of happy that I got to sign Joss up for another week of Philbrook Camp, after we had to miss half of his previous camp experience due to a COVID exposure. I knew he’d love being back at Philbrook, and this was a really cool camp concept! At the end-of-camp showcase, the kids played a group song they’d composed using various instruments. Plus, Joss got to demonstrate a theramin, play on an electric keyboard and other instruments. 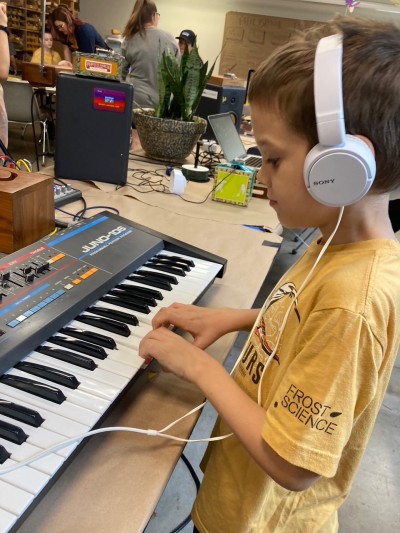 Best yet, all the campers left with a CD of three songs they’d composed and recorded. Plus album art. Joss’s had to do with Aliens (Aleins), and was very electronic sounding. We’ve been listening to it in the car. 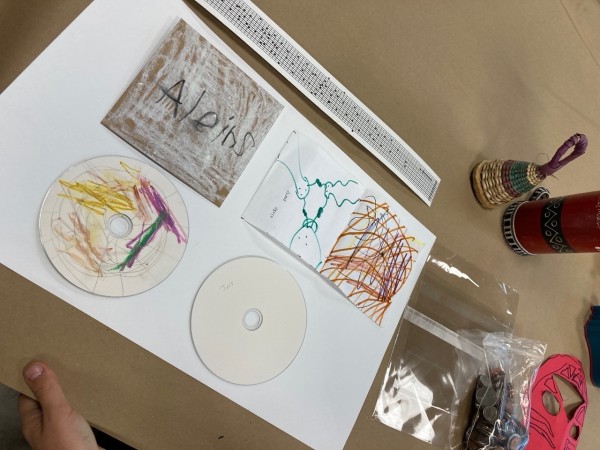 So thank you to ahha and Philbrook for a low-stress, highly creative camp experience!

One of my summer bucket list items was helping Joss learn to ride without training wheels. Not going to lie, I was putting this off hoping that Daniel would find time to teach him. And Joss seemed pretty reluctant. However, I finally decided it was time to quit waiting, and I just needed to do it. So last week, Daniel took his training wheels off. Joss spent the rest of the day refusing to do anything until we put them back on.

But I finally offered to bribe him if he would just give it a try. What he wants more than anything, apparently, is bricks to build a secret lab. And thankfully bricks at Home Depot are about 64 cents, ha. So we worked out a payment system. Three bricks per practice, and then more once he became a confident rider. 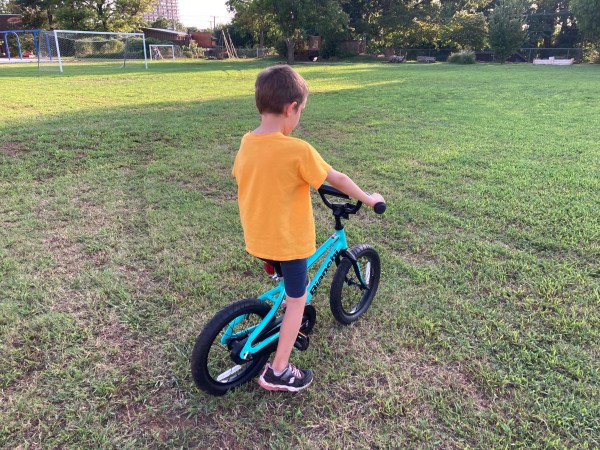 I promise we had a helmet on most of the time!

We did most of our training at the Council Oak playground, which I highly recommend. There’s a nice track running around the perimeter of a large field. So you can ride in the grass if needed, or the track if they prefer. And there aren’t usually too many other people there. 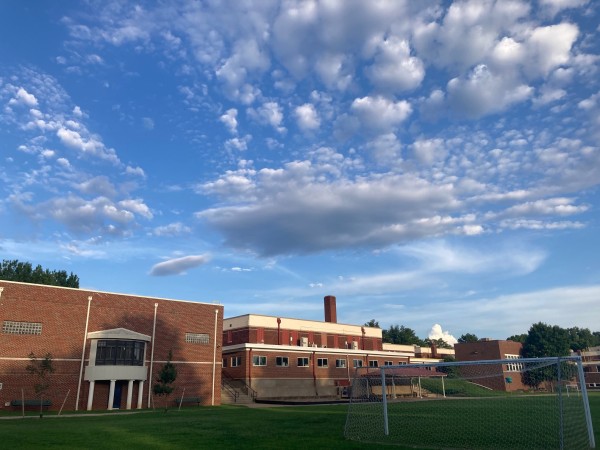 Plus, it’s so pretty!

At first, I tried to “help” by holding the bike to stabilize him as he got started. But we quickly realized I was not actually helping, so I let him just try by himself. Once he realized he could catch himself before tipping over, he was pretty willing to keep trying. Got frustrated a few times, for sure, but the call of the bricks kept him motivated.

Last night, I made the mistake of telling him he could get his final 20 bricks if he could ride one lap around the track. Previously, he hadn’t even been able to make it a quarter of the way around. But he ended up doing almost two laps!! So we will still keep practicing, but I’m SO glad he is feeling confident and excited to ride more. Result!

Thanks to Kristi Roe Owen, I ended up signing up for GISH (Greatest International Scavenger Hunt) again this year. I’d skipped last summer. But basically this is a week of doing creative activities, thinking outside the box and generally being goofy. And perhaps, mildly competitive. Ha. It’s a week of reading and re-reading a list of about 200 creative tasks and thinking, “Well, maybe I could attempt that one.” When on the first read-through you thought, “No, way!” It helps that expectations lower significantly by the final day, when you’re just trying to check off as many tasks as possible.

At only $25 for entry (I think), it’s a nice chance to meet new people and do things you wouldn’t otherwise do. It can be a lot of pressure though, and I definitely lost sleep throughout the week. And still need to catch up on laundry, etc. Agh! Anyway, here are some of my favorite entries for this year, that Joss helped with 🙂 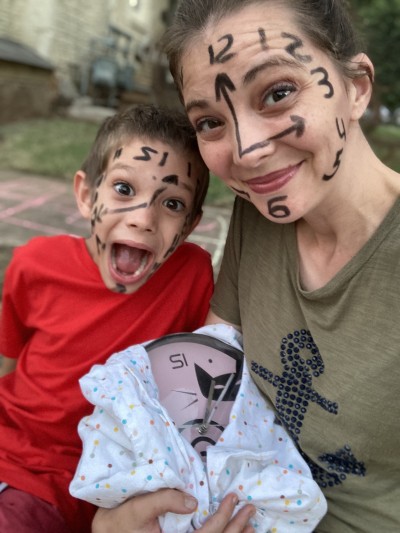 Prompt: “Time is Relative. Show us the family reunion.” 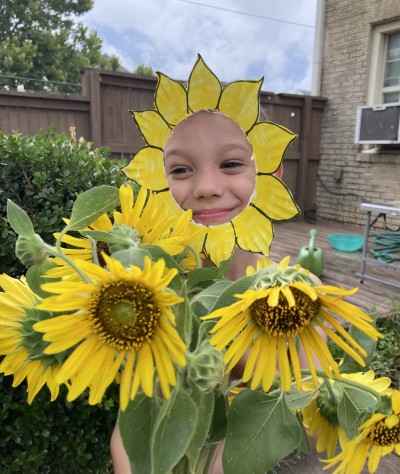 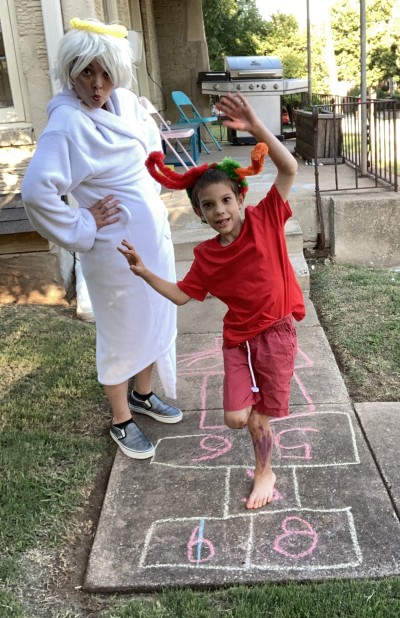 Prompt: “Show us an angel and demon playing hopscotch (which is known as Himmel und Hölle, aka Heaven and Hell, in Germany).”

We’ve gone on a few other mini-adventures as well. But now it’s definitely time to switch gears to school supply shopping, meet the teacher, etc. Are you ready for the new school year? What are some favorite memories you made this summer? Let me know in the comments! 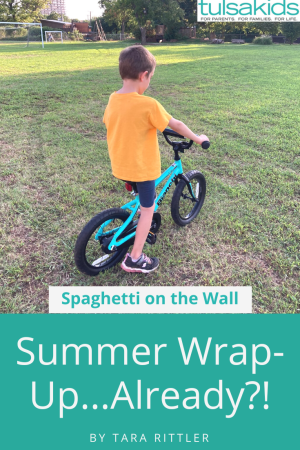