Why 'Whisper of the Heart' is one of my favorite Studio Ghibli films.

I recently introduced Joss to two of my favorite films, “Whisper of the Heart” and “Howl’s Moving Castle,” which he refers to as “The Boy With The Violin” and, simply, “The Castle.”  Both are produced by the beloved Japanese film studio Studio Ghibli, although while “Howl’s Moving Castle” was directed by the studio’s most well-known director, Hayao Miyazaki, “Whisper of the Heart” was directed by Yoshifumi Kondō, who, according to Wikipedia, only directed this one film before his death in 1998 (three years after the film’s release).

“Howl’s Moving Castle” is based on a book by Diana Wynne Jones and is neck and neck with “Stardust” in competition for the honor of being my all-time favorite movie. It tells the story of Sophie, a reserved young woman resigned to a life of working in her deceased father’s hat shop. Sophie does not believe she has anything to offer the world except staying faithful to her perceived duty, whether that brings her joy or not. When warned against walking through the city alone because the notorious Wizard Howl might find her and steal her heart, Sophie just shrugs and says, “He only goes after beautiful girls.”

However, soon after the Witch of the Waste curses Sophie, turning her into an old woman but unable to tell anyone who she really is. As an old woman, Sophie finally escapes the hat shop, journeying into the wild to seek out Howl and find a way to break her curse. Old age gives Sophie courage to speak her mind, even to authority figures and handsome, somewhat spoiled wizards, and to discover and follow her own dreams.

Whisper of the Heart

As a writer who grew up playing violin, the fact that “Whisper of the Heart”‘s two central characters, Shizuku Tsukishima and Seiji Amasawa, are an aspiring writer and violin maker respectively, means I felt an instant connection to the story. Much like Sophie, Shizuku has trouble seeing herself as valuable. She is a 14-year-old who spends most of her time reading books, putting off studying for exams and worrying that she doesn’t have anything to offer. When Seiji’s grandfather encourages her in her writing, using the metaphor of a geode with hidden crystals, Shizuku worries, “What if I try polishing it and there’s nothing there except rock?” Although I’m an adult, identify with Shizuku’s fear. Writing is terrifying–the thought of spending hours on a project and not knowing whether or not it will be any good once you’re done? That fear still paralyzes me, sometimes more than others.

In order to prove that she is “good enough,” Shizuku sets herself a goal to finish a story in two months. She spends all her free time writing and, when she finally shows the story to Seiji’s grandfather, is disappointed by his reaction. While he is very complimentary of her writing, she needs the reminder that writing is hard work and takes practice. We can’t expect to attain perfection on our first try. I love that this is part of the film’s message. (To be honest, according to Wikipedia, Shizuku begins crying because the relief of having finished her project and hearing it complimented is overwhelming…so it’s possible I’ve misunderstood this scene, although I still like my interpretation better!)

Country Roads in Whisper of the Heart

Warning: If you do watch “Listen to the Heart,” John Denver’s “Country Roads” may get stuck in your head for the next month. Before she writes her story, Shizuku’s primary writing project is re-writing the lyrics to “Country Roads” in preparation of their upcoming graduation: “I dreamed of living/alone but fearless,/Secret longing/to be courageous./Loneliness kept/bottled up inside;/Just reveal your brave face/they’ll never know you lied.” Here’s a YouTube video of Shizuku’s version of “Country Roads,” along with Seiji’s violin accompaniment:

I thought it would be fun to ask a couple friends which Studio Ghibli films their family most enjoys, and why.

SOTW: When were you first introduced to Studio Ghibli films?

SR: I was first introduced to Studio Ghibli in 2004–when I borrowed a recorded VHS of it from a friend.

SOTW: Which are your favorites/least favorite Studio Ghibli films, and why?

SR: My favorite is “Kiki’s Delivery Service.”  I love Kiki. As a mom, I love that she is respectful, hard working, and spunky; I like my daughters to emulate that. As a human, I love that she shows us we all need to find our “why.” I think we’ve all lost faith in ourselves, and she shows that we aren’t broken, we just need to find our reason. My least favorite is “Ponyo.” I’m sorry. I know “Ponyo” gets a lot of love, and there are parts that I appreciate. But it seems pointless and sporadic, weirdly paced, and I just couldn’t get into it.

SOTW: Which are your kids’ favorites, and what do they like about them?

SR: My four year old, Selah, says, “Totoro and Kiki are both my favorite! ‘Casue there’s a big totowo and a little Totowo, and yeah. It’s weird. And Kiki has a black cat that is funny.”

My six year old also loves Totoro: “I like Totoro and all the other little totoros. I like the little girls and the story. And I think of Satsuki (the big sister) being me.”

SOTW: Do you watch other anime? If so, what do you recommend?

SR: I don’t really, not anymore. I used to when I was younger. I watched DBZ, Inuyasha, Gundam Wing. I read a bit of manga and watched their counterparts: Ranma 1/2, Fruits Basket, etc. Most anime isn’t family friendly, and I’m not going to use my precious post-bedtime hours to watch anime! Lol. I recently watched “Ronja: The Robber’s Daughter” with my kids. We enjoyed it. We also love Avatar: The Last Airbender, as well as Korra.

“I first saw Totoro in college. My friend and I rented it from this awesome video store that had vintage cartoons from the ’80s. We loved how weird and sweet and pretty it was. My daughter loves three Studio Ghibli movies, Totoro, Kiki’s Delivery Service, and Pony. She loves the cat bus in Totoro and the cat Gigi in Kiki’s Delivery Service. The movies are beautiful, peaceful, and quirky and have small children as main characters.”

And finally, here is a sonnet reflecting on some of the themes found in “Whisper of the Heart.” Like Shizuku, it’s easy to worry that it may just be “corny,” but the act of writing poetry always makes me feel better about myself and life:

They tell you practice leads to perfect art,
To flawless execution of an act,
They tell you this, as though it’s patent fact;
And yet I find it difficult to start:
For “practice makes perfection” sounds too trite,
As though that practice were an easy thing
And not a million missteps, faltering,
A stack of wrongs preceding one small right.
But even more, I doubt the phrase itself
And fear for hours lost in vain pursuit
Of a passion with no talent at its root,
Of a dream that should be put back on its shelf.
But what I know is this, all doubt aside,
That failure’s certain if you never try.

And, if you can believe it, I found this perfectly relevant card at Trader Joe’s the other day! 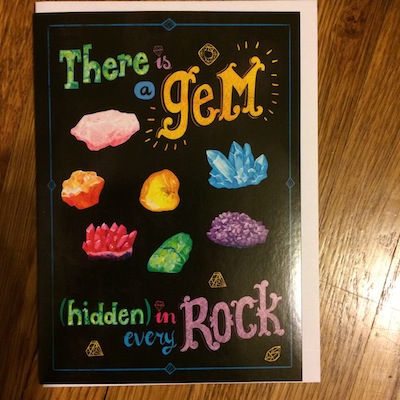 So, as a mini-giveaway, I will send a handwritten poem of encouragement to the first person to indicate in the comments, either here or on FB, that they’d like one. 🙂

Thanks for reading, and feel free to share about your favorite Studio Ghibli (or other anime) films here!