My daughter and I have always been close, but the birth of Callister has brought us closer than ever.

My daughters and I have always been close. Maybe because I was a single mother for much of their childhood or perhaps it’s simply the normal mother-daughter bond. Yet with my oldest daughter there were sometimes different points of view when it came to emotional issues. She’s an intellect, focused on looking at the facts and scientific evidence. I’m more of an emotional person, too often thinking primarily with my heart.

I’m ridiculously sentimental, especially when it comes to my daughters’ childhoods. Their first 18 years are carefully documented in stacks of photo albums and DVDs. I have calendars of their first two years with details of every milestone they hit, all the “firsts” documented and every cute thing they said or did faithfully recorded. On their birthdays I insist on sitting with them and reminiscing as we slowly peruse each photo album.  My daughter has always been patient with my nostalgic musings, but it’s also been obvious she is being politely tolerant.

I knew being a mother would change her, it is one of the most life altering events that ever occurs, but I’ve been surprised at how much it’s changed our relationship. Even though my grandson is only four months old, my daughter already understands me in a way she never did before. Alexandra said the hardest part of parenting so far is the worry that is never far from her mind.  Elizabeth Stone’s quote, “Making the decision to have a child-it is momentous. It is to decide forever to have your heart go walking outside your body,” is spot on. The worry doesn’t end when they leave for college; it never ends. When my daughter was 24 and in vet school, she, her dog and a friend got lost at Lake Carl Blackwell near Stillwater. It was dusk when I got the call saying, “Hi mom, we’re lost somewhere in the woods near the lake and my phone is about to die.” The frantic search started with three cars of family and friends looking for them. My imagination went wild and I envisioned my precious daughter accepting a ride from a stranger and being kidnapped; it was then I decided I must call the police! Fortunately, my other daughter found them walking on the highway miles from their car. When we reunited, I was crying and hugging her, alternating between being mad at her for not charging her phone before she went hiking and being thrilled and grateful she was ok. Alexandra was totally calm and thought I was completely overreacting emotionally.  That story has been retold many times and my daughters always laugh about what they refer to as “Mom’s dramatic emotions”. Since Alexandra became a mother, she has brought that story up and apologized for being judgmental saying she finally understands why I was panicked.

Anne Lamott wrote a book about her son, Operating Instructions: A Journal of My Son’s First Year, and she repeated the quote from an unknown source, “There are places in the heart you don’t even know exist until you love a child.” That’s not true for everyone, but I do think for most people becoming a parent widens the range of emotional experiences. Children can push you to the extremes: frustration, worry and stress but also happiness, pride and pure joy. Alexandra has always been a sweet, happy, easy-going person, but now I see a depth of emotion I never saw before; a softer, more sentimental aspect of her personality has emerged.  I’ve always been very demonstrative, physically and verbally, with my love for my daughters, and I see her exhibiting the same traits with her son. I love watching my daughter as a mother, observing the deepening connection between her and her child. It is rewarding to see her as a loving, excellent mother. Recently, she had to pack away all the newborn clothes her son has outgrown and she expressed wonder and a tinge of sadness at how he was already growing and changing so rapidly. For the first time she understands why I hold onto a few tiny pink baby outfits, the fabric thin, pilled and yellowed with age. It’s a physical reminder of the newborn that made me a mother for the first time and changed my life forever. 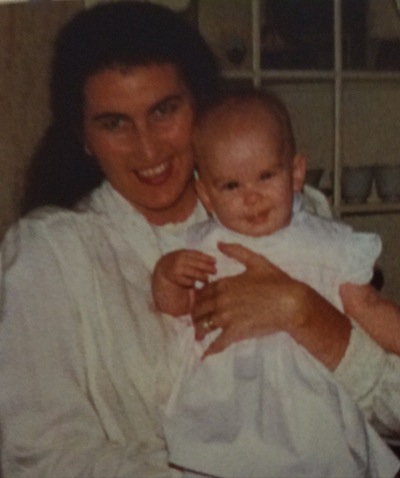 Our relationship has changed in the four short months into her role as a mother. She “gets” me in a way she never did before, and our connection is stronger than ever. She always knew I loved her, but now she feels for herself the depth of a mother’s love. She also comprehends the sacrifices a mother willingly makes for her child’s well-being and happiness. We also share a complete and utter love for this new little guy, a common bond that unites us even closer! A few days ago, my daughter sent me this link, a tearjerker video begging for children to slow down the growing up process. It was bittersweet thinking of my daughters’ long gone childhoods but a joy anticipating my grandson’s childhood still ahead! I know we will savor every minute!