A Fine Olde Time at the Castle of Muskogee's Renaissance Festival

I‘ve been meaning to go to Castle of Muskogee’s Renaissance Festival for the past several years. And I would have once again missed the Festival season if my husband, Daniel, hadn’t mentioned wanting to take Joss. So on the last day of the 2019 Renaissance Festival (Sunday, June 2), the Rittler family went back in time!

Between church and the can’t-miss annual Tulsa Cookie Crawl, we didn’t get an early start, leaving Tulsa around 2:30 p.m., arriving after 3 for a Festival day that ended at 6. So our time at the Festival was a bit rushed; but although we may not have done it complete justice, we still had a wonderful time.

If you purchase tickets online, they’re a couple dollars cheaper. At the gate, adult tickets are (as of 2019) $16.95, while kids 5 and under get in free. Students are $12.95 at the gate, and children 6-12 years old are $7.95. This does not include additional activities, such as the Queen’s Tea or The Royal Luncheon (not to mention any other food/drinks/souveniers you may want to purchase). All that to say, a trip to the Renaissance Festival is not necessarily a cheap family outing; but we don’t do a lot of “family day” activities, so it was definitely worth it.

As soon as you walk through the Castle gates, you’re transported to a Medieval village. We bypassed the Information booth, which I later thought may have been a mistake–the Castle grounds are so large (vast tracts of land?), that it would have been nice to have a printed map and schedule. But just wandering around served us pretty well. 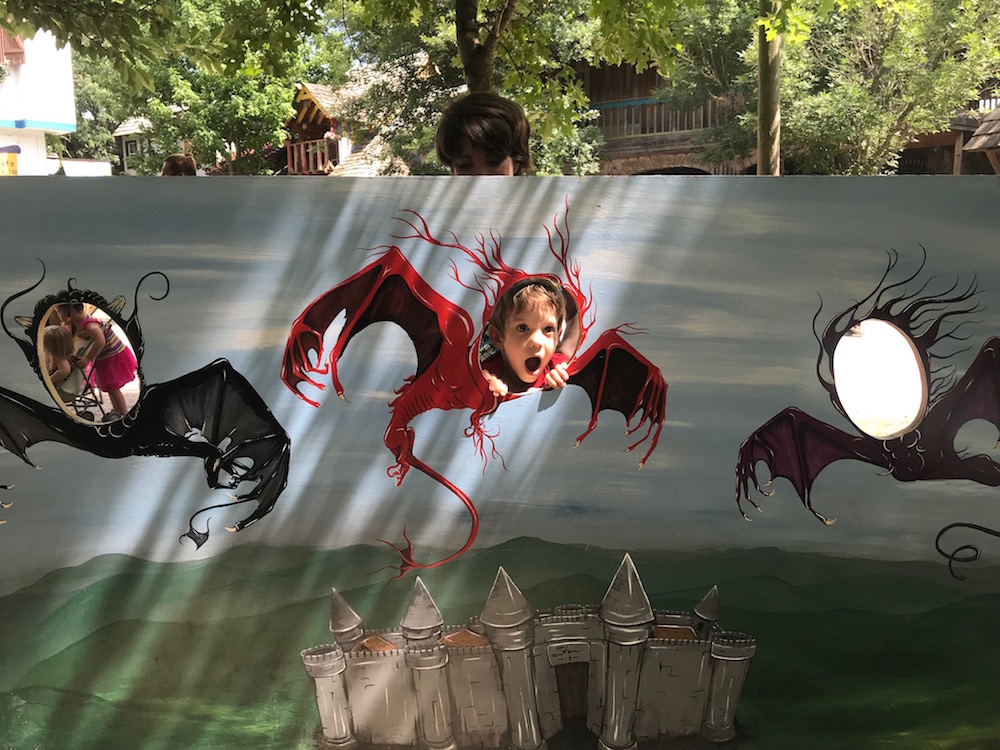 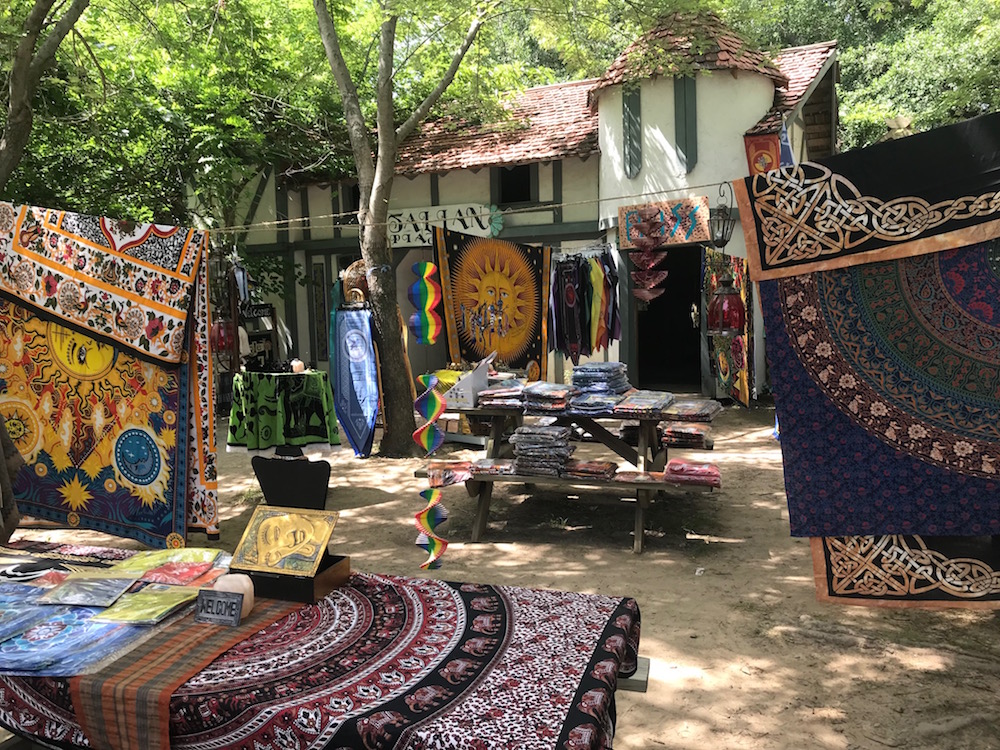 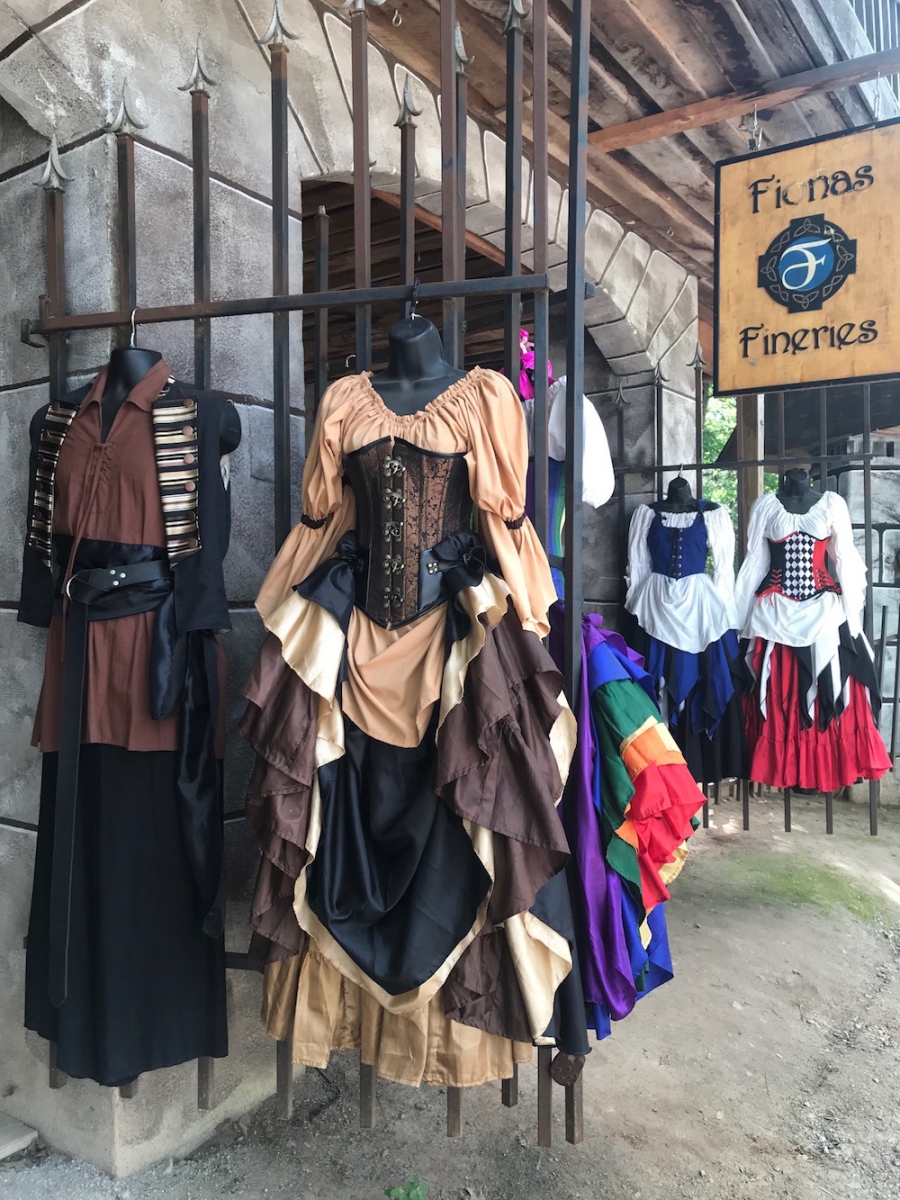 Something we did not take advantage of–maybe on a day it isn’t too hot!–is the costume rental! As someone who loves dressing in costume but doesn’t have a wardrobe full of Renaissance gear, I love this option!

There are shops everywhere–both indoors and a variety of booths–selling everything from corsets to armor to honey to–my personal favorite–wearable (adorable) plague rats. 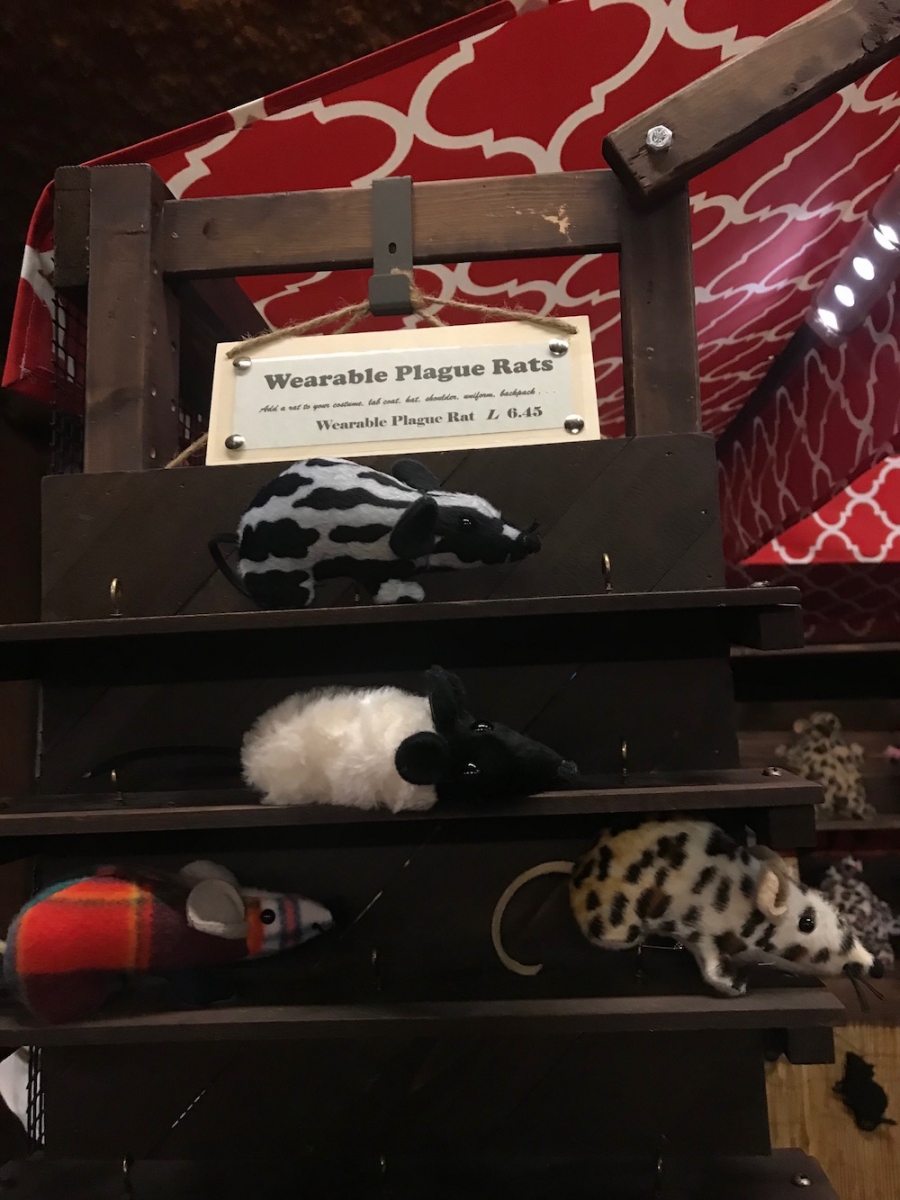 Although Joss was begging for a rubber dragon you could wrap around your arm, at $25 for an entry-level dragon, we passed. We were, however, swayed when an armor purveyor called out as we were walking by, “Doesn’t that boy need his first sword?” It turns out, he did. Or at least a long dagger. They told us to come back and get an upgrade next year, haha. 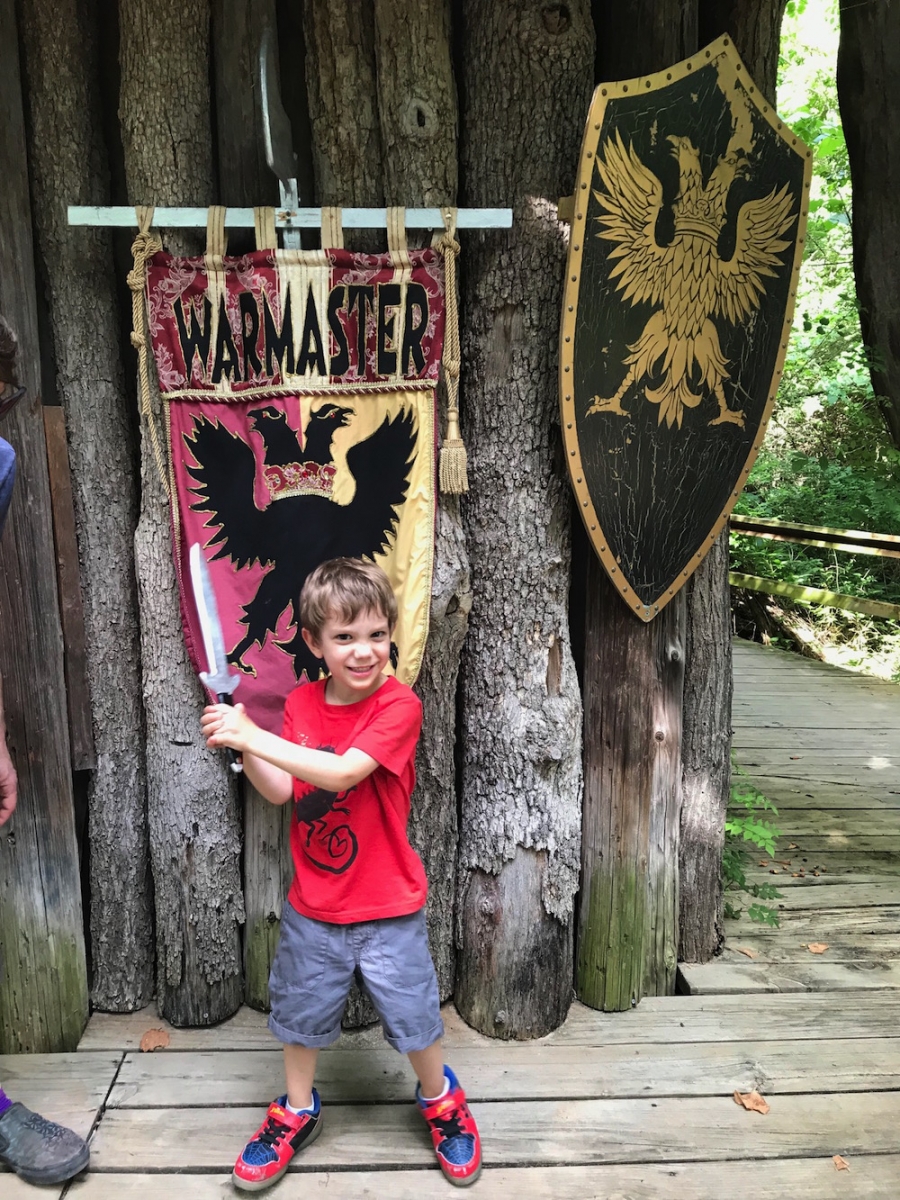 Note: The dragon shirt was intentional 🙂

Inside the Castle building (as opposed to the Castle establishment), there was a musical show, a “History of Torture Tour” (for an additional small fee–we passed, having seen it previously at the Halloween Festival), additional vendors and a large children’s area. We skipped this due to the time constraints–it looked like there would be too much waiting in line for comfort–but there were a series of tables that kids could meander through, doing different educational/entertaining activities at each. And this would certainly have been a tempting option if the day had been any hotter than it was, time constraints or no! 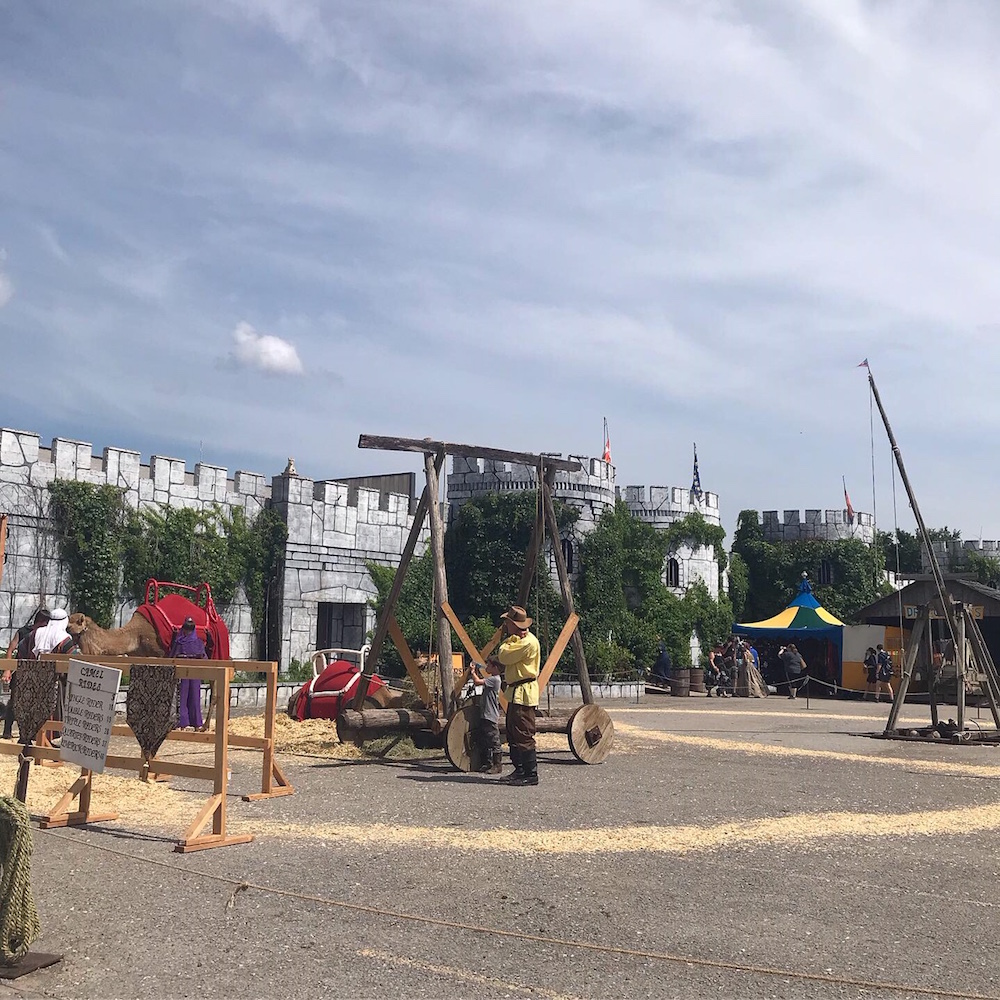 “Gwom” the Gargoyle was another Castle resident, sitting just outside the Torture chambers. The man taking money for the Torture Tours  was very friendly and made sure Joss knew that Gwom was a friendly gargoyle who ate monsters, not a monster himself. Then he said that, unfortunately, there aren’t a lot of gargoyles left in their native lands because when people conquered them, they didn’t know what they were so assumed they were something that needed to be broken to bits. So we got a nice lesson about not making quick assumptions, especially when you’re somewhere new and in someone else’s home. 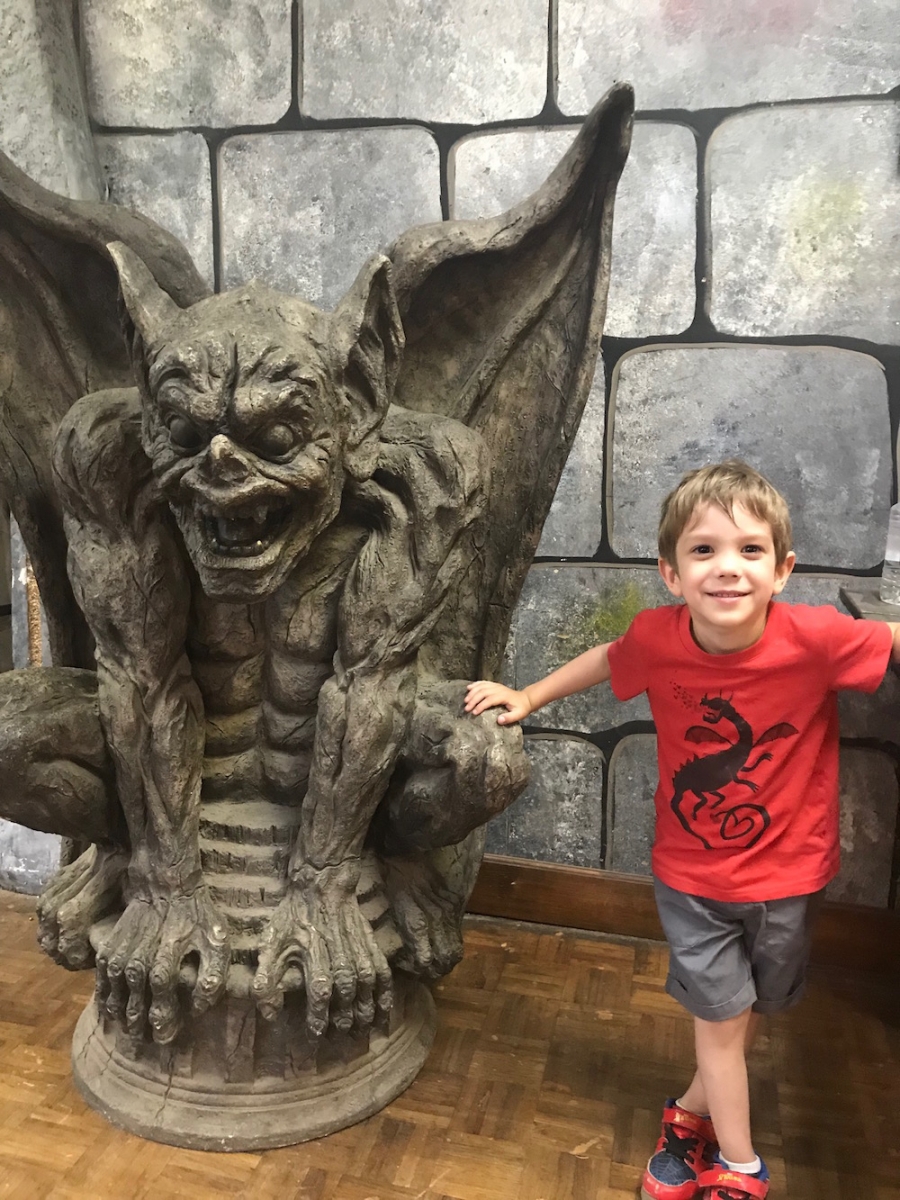 The friendliness of the Renaissance Festival characters is one of the best parts of the event. The ones we talked to all seemed to have back stories and were eager to share any knowledge they had, whether it be pirate flags, Renaissance weaponry, or the life of a gypsy. 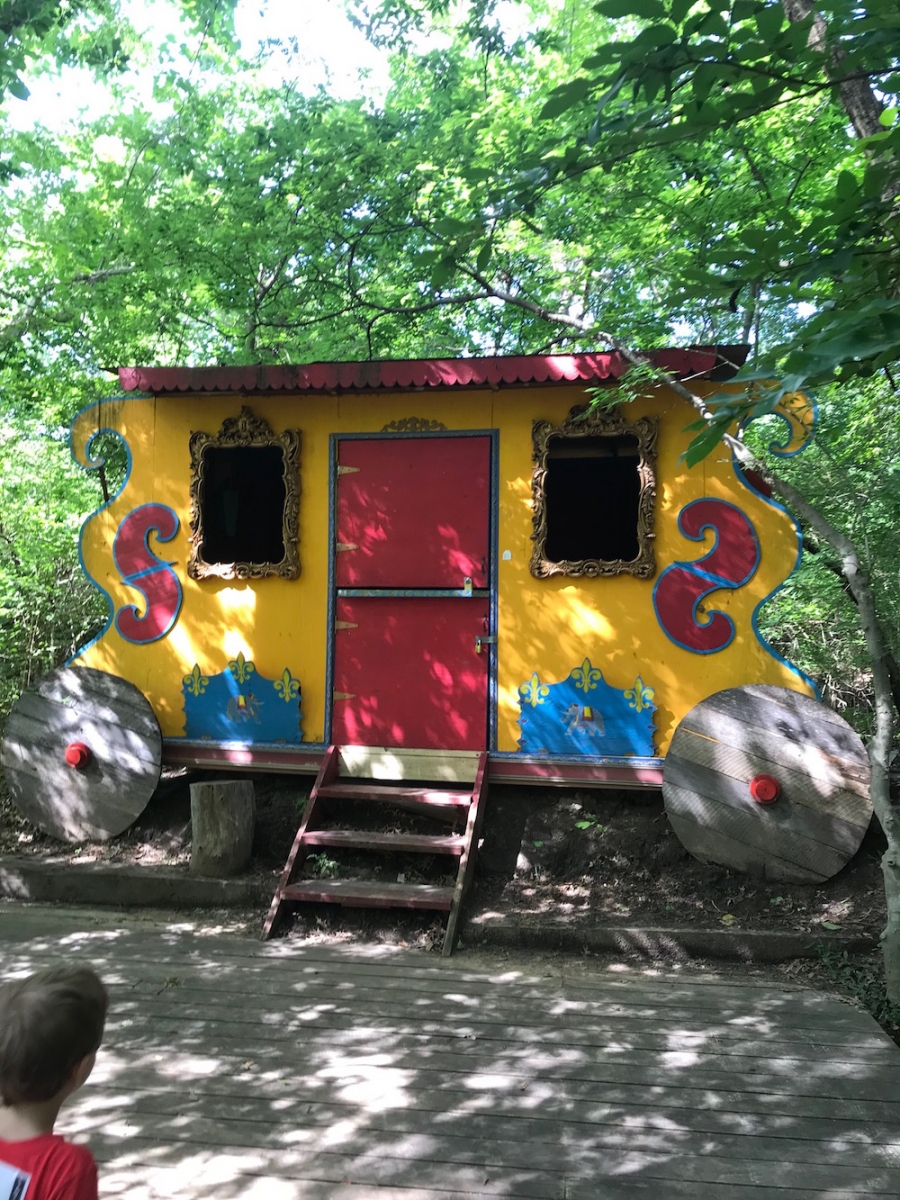 Above, I mentioned several activities you can do for additional fees; however, there is a lot of free entertainment, as well, including Knightwings, who taught us about Birds of Prey–different kinds of falcons, hawks, etc.–and of course the Jousting show, which involved plenty of fake blood and even a stake for burning enemies! (Don’t worry, she got away.) I was a little worried Joss wouldn’t understand that the fighting was just a show–he was a little worried when one of the knights got “hurt” and was replaced by a female champion–but I don’t think he suffered any lasting harm. It really was fun watching the jousting–something so familiar, but nothing I’ve had the opportunity to see in real life! 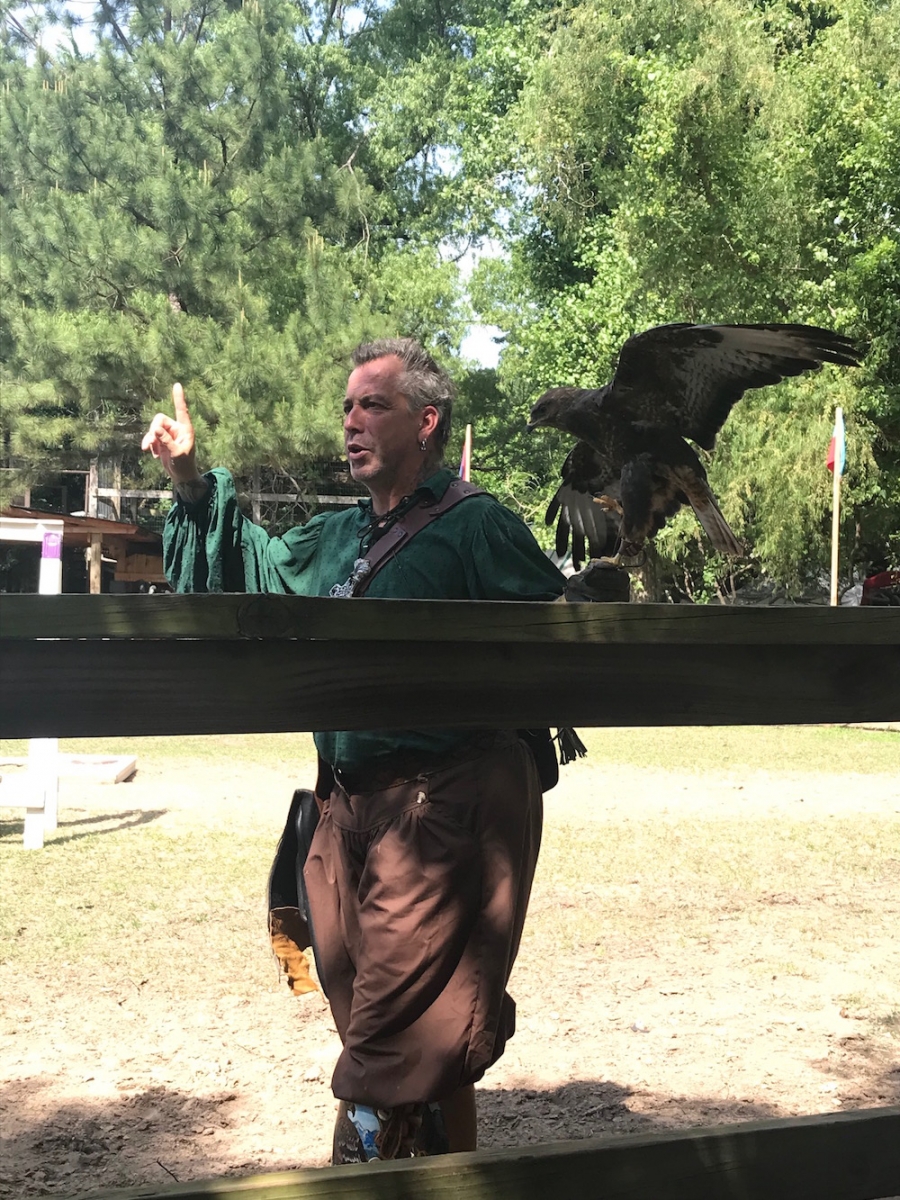 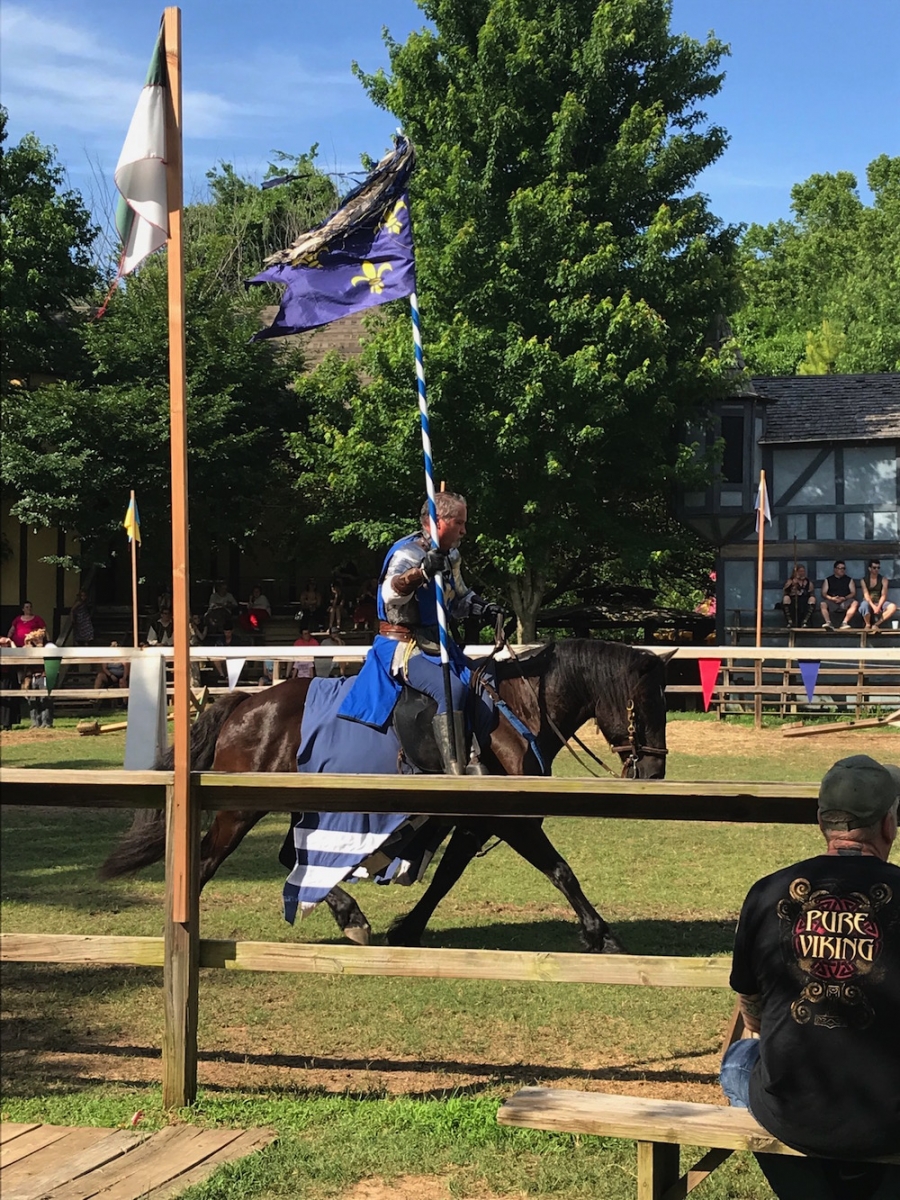 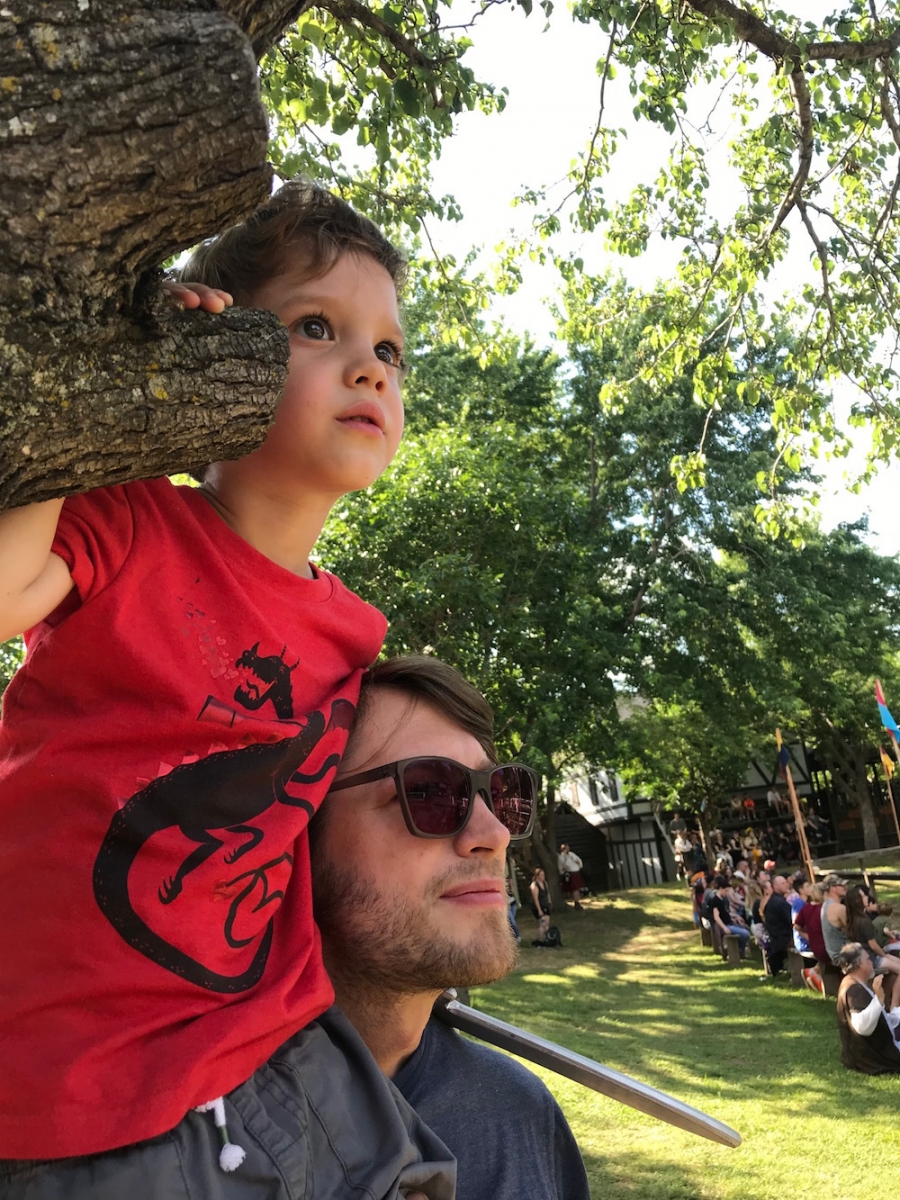 Currently one of my favorite pictures ever <3

Another free activity for kids was the petting zoo; some activities we were tempted to pay for but didn’t included archery and knife throwing (5 throws for 5 pounds!): 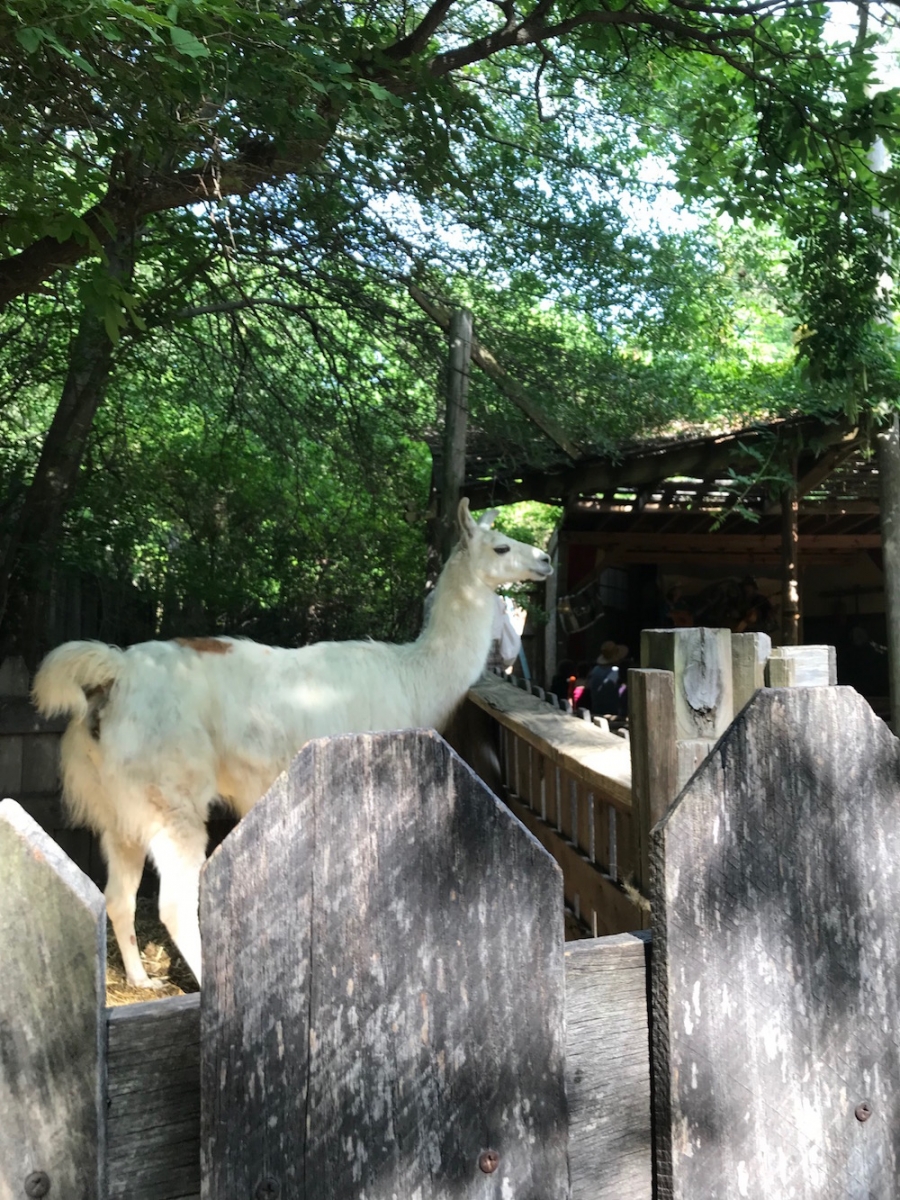 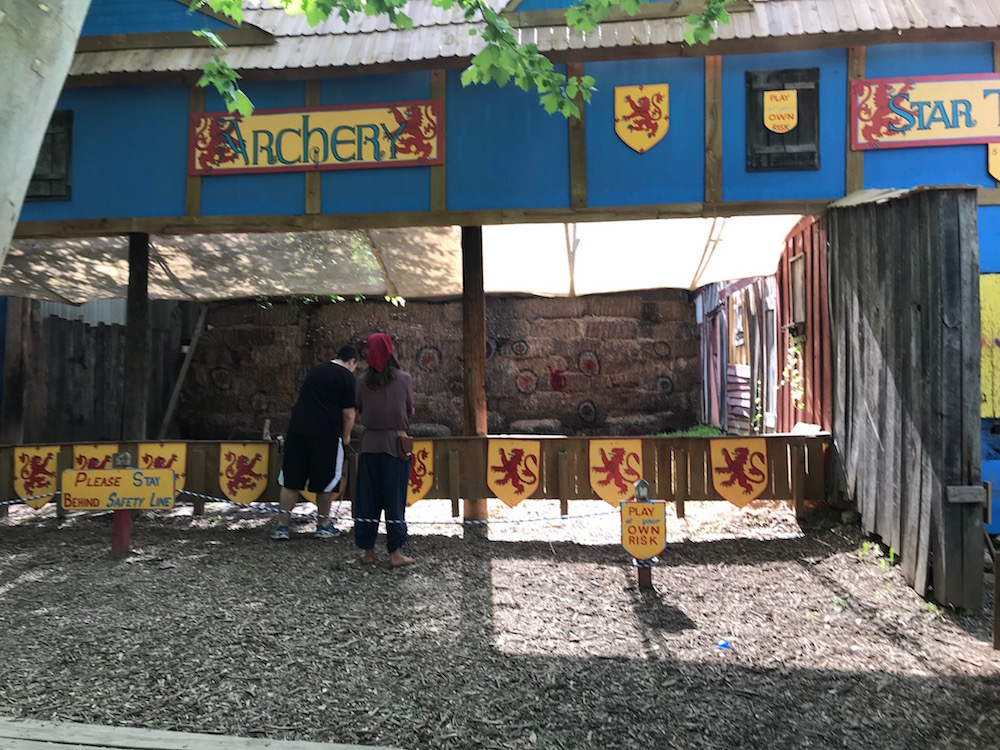 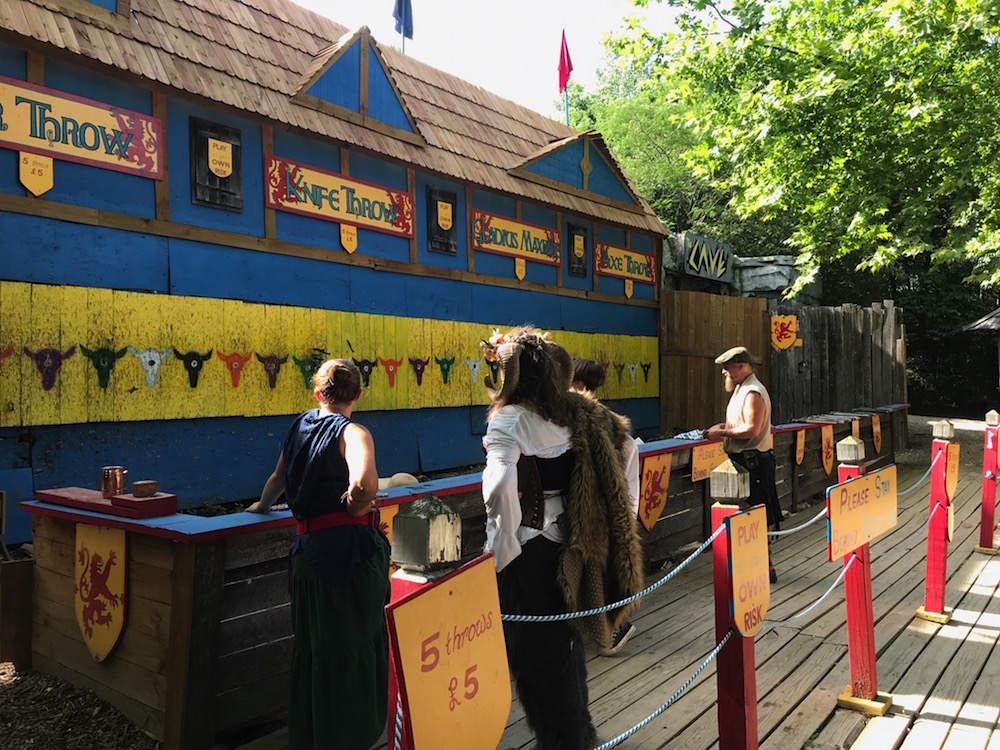 Although bound by a Renaissance theme, there are several distinct sections of the Castle complex, including a pirate cove, a gypsy camp, and the Enchanted Boardwalk, which is also home to a fairy glen–and some fun photo backdrops: 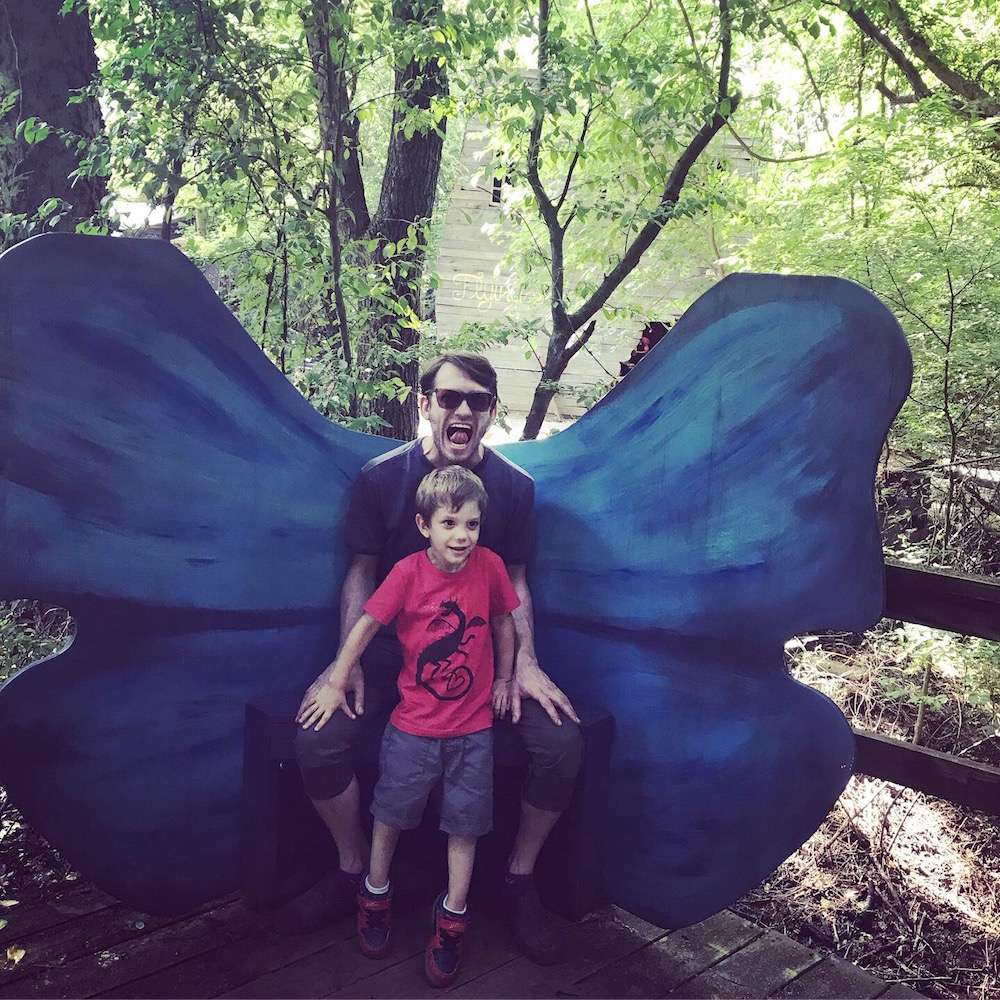 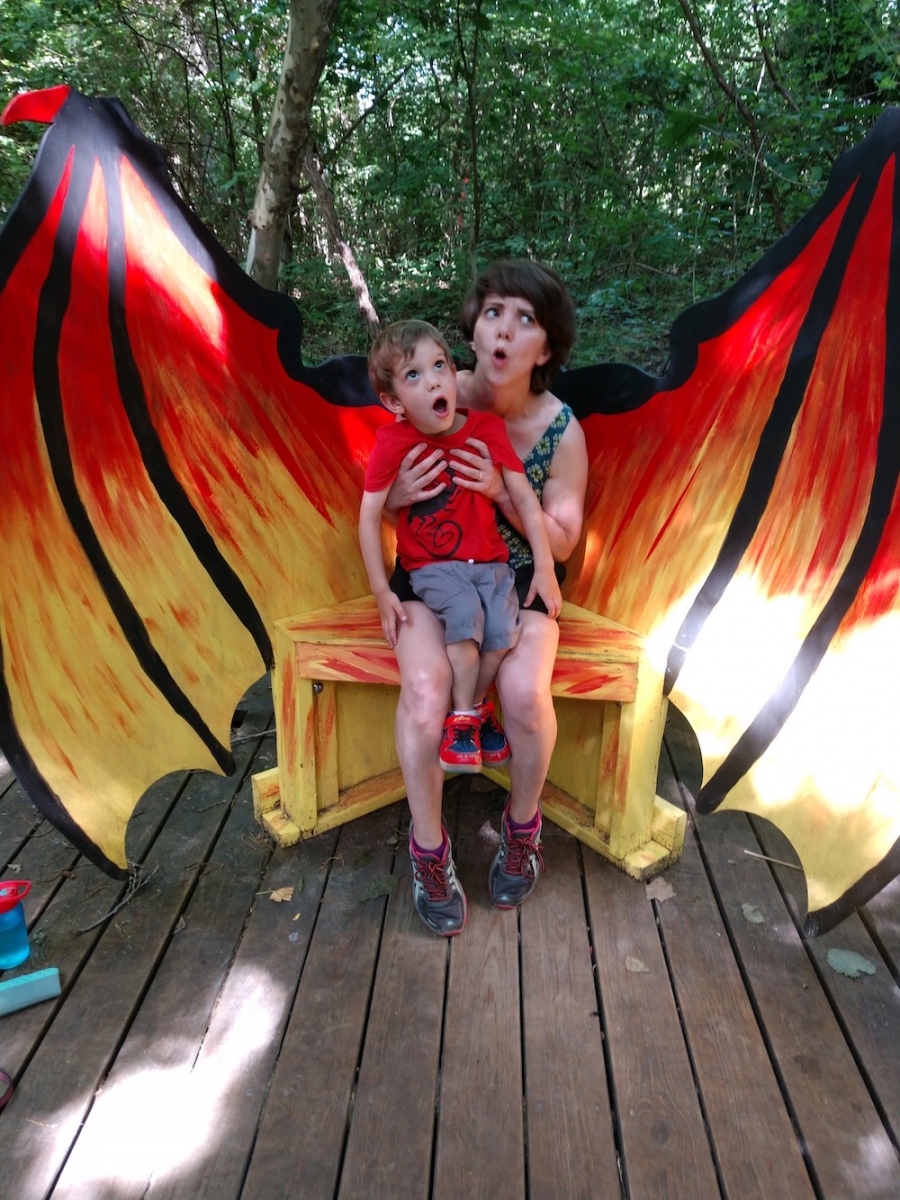 If you’re wondering about food, there are plenty of options. We didn’t get hungry enough for a meal while there, but I was tempted by the Fish and Chips in the pirate cove, and there is a food stop near the entrance called the Smokin’ Dragon that sells all your favorite barbecued fair foods–so you won’t go hungry! We couldn’t resist a Sno Cone (both because Joss really wanted one and it was a warm day and because you could add your own flavor! Which was, to me, a bonus. That, and they said “Huzzah!” when you ordered. 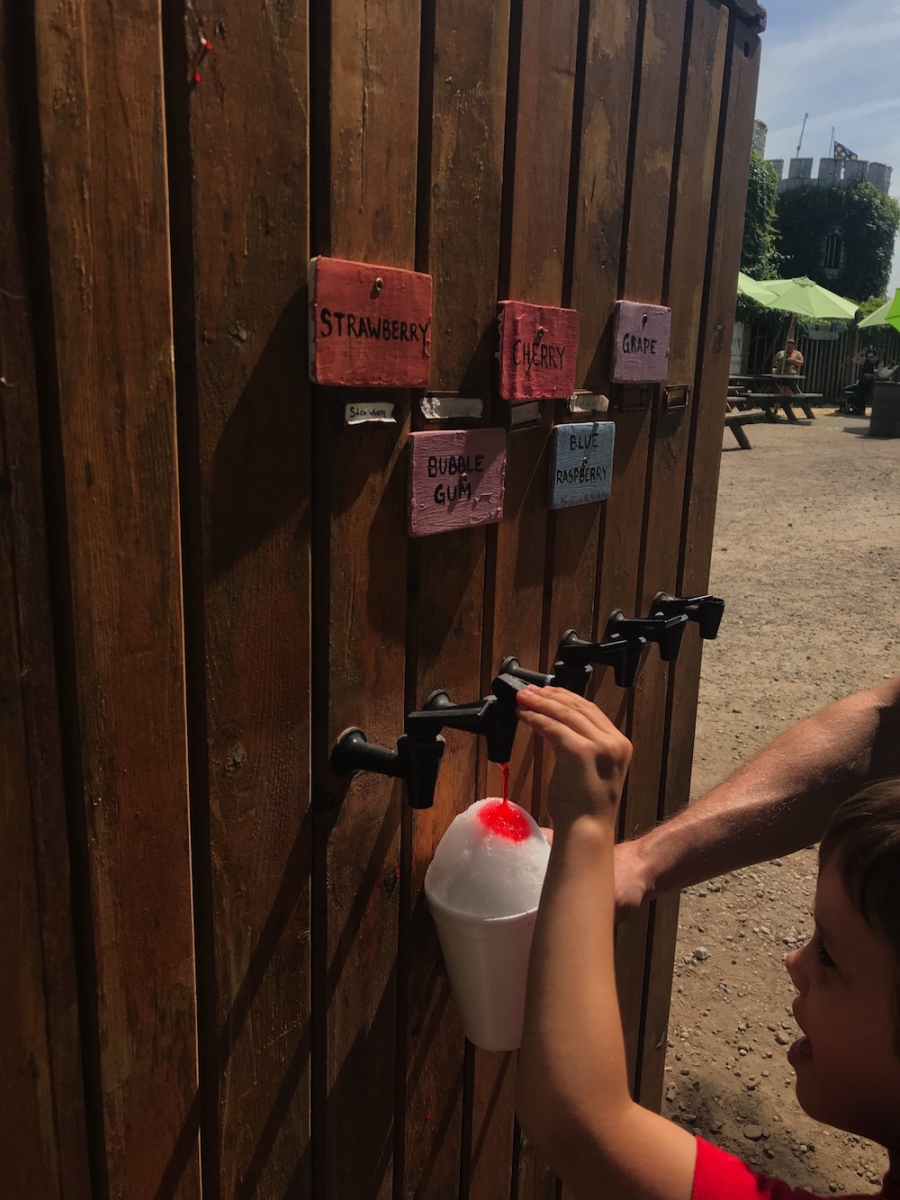 As we left, a large crowd of characters and musicians were lined up along the exit, singing “Country Roads.” When asked later what his favorite part of the Festival was, Joss’s response was “Country Roads.” I don’t know if this was something they do at the end of every Festival day or just because it was the final day–either way, it was a lovely touch! 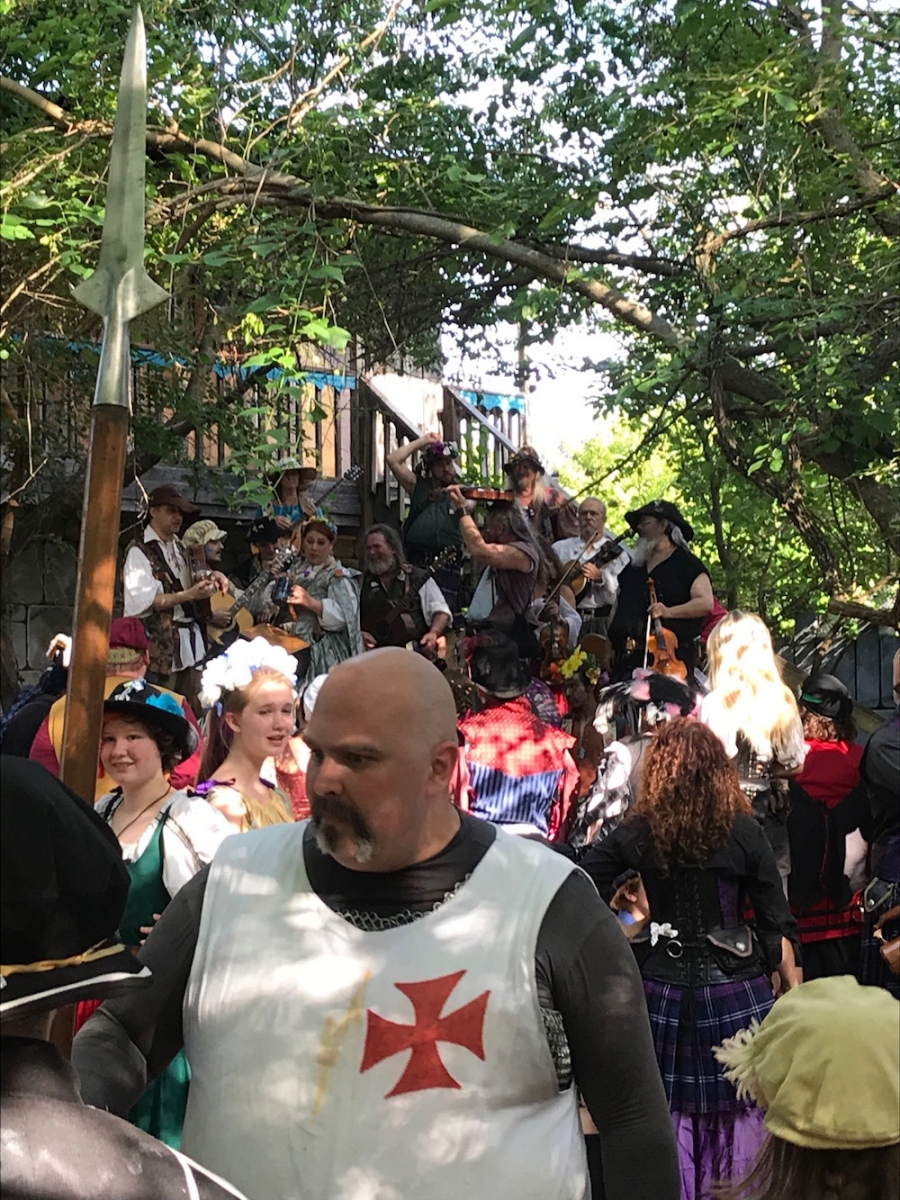 If you went to the Renaissance Festival this year or in years past, what are your favorite things about it? What did we miss that we should make a point to do (or eat!) when it returns in 2020? 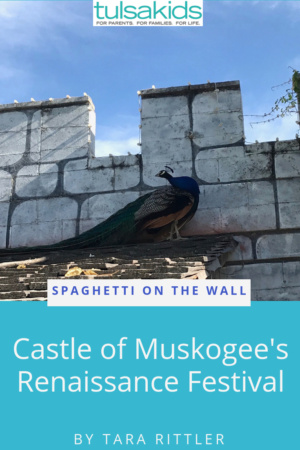