So Much for Transparency

Who really benefits from the Oklahoma Public School Resource Center?

I have been a little skeptical about whether the Oklahoma Public School Resource Center (OPSRC) is actually working FOR public schools or AGAINST them. The board of OPSRC looks like a school privatization club:

Note that one of the board members is Scott Smith, executive director of the Arkansas Public School Resource Center (APSRC), also funded by the Walton Family Foundation. The APSRC website is almost identical to the OPSRC website.

Why is a guy from Arkansas (Scott Smith) on the Oklahoma Public School Resource Center board?

I found out when I read this blog about the Arkansas version of OPSRC: “Inside the Shadowy World of the Arkansas School-‘choice’ Movement,” written by Cathy Frye, a former employee of the APSRC. Frye is a former journalist (21 years as a reporter; 15 years with the Arkansas Democrat-Gazette) and was hired as communications director for the APSRC. In her job interview, Scott Smith asked if she “had a problem with charter schools.” Not knowing much about them, she replied with an uncertain “no,” although she admits later that she is a traditional public school supporter.

Frye worked for the APSRC for three years and resigned in June of 2019. Her blog is a three-part series about working for the APSRC. She writes:

I think the turning point for me was when, at the beginning of APSRC’s annual membership drive in the spring/summer of 2019, Smith said on three occasions – in my presence – that “If you can’t dazzle them with brilliance, baffle them with bullshit.”

As a journalist, this really bothered me. My old-school B.A. in print journalism represents – to me, anyway – an oath to be accurate, fair and credible.

I spent decades looking for facts. I believe in transparent and ethical journalistic practices.

Baffle them with bullshit?

There will be no “baffle them with bullshit” from my little corner of the universe.

Also, covering the 2019 legislative session left me disturbed and downright angry about what is happening in public education. The 2017 General Assembly gave me serious pause. The 2019 session revealed the seamiest side of the school-”choice” movement.

In this post and those that will follow, I’m going to share the details of my three years at APSRC. Since quitting, I’ve learned that most people – even those in education – don’t realize how APSRC is structured or how it operates. Yes, it’s a nonprofit primarily funded by the Waltons. But it’s also a powerful and influential force where the governor and state Legislature are concerned.

Also, did you know that there is an Oklahoma Public School Resource Center? I ask you to take a moment to reflect on how public education is faring there.

Based on what I witnessed during my three years at the organization, I feel comfortable saying that APSRC’s purported mission – providing resources and services to public schools – is just a half-hearted cover for the agency’s true purpose – to serve as a lobbyist for the Waltons and their efforts to dismantle public education. That includes strong-arming the governor, GOP lawmakers and Arkansas Department of Education Commissioner Johnny Key.

Keep in mind that Scott Smith, the person wanting to dazzle Arkansas public school districts with bullshit, is the same person who is on the board of the Oklahoma Public School Resource Center.

In part 3 of her series, Frye ends with the following:

“Think of it this way – open-enrollment charters are merely placeholders in the Waltons’ endeavor to dismantle public education.

Parents, teachers and those interested in getting more state funding for public education need to be aware of how things can be manipulated behind the scenes. If what Frye reports about APSRC is accurate, then who and what is the Oklahoma Public School Resource Center working for — Public schools or the dismantling of public schools? 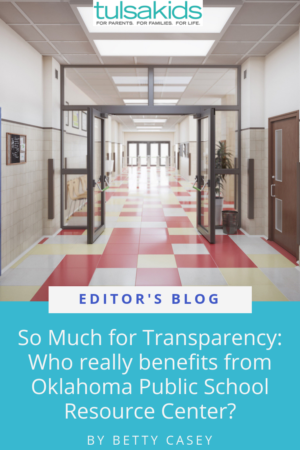