The Lamppost: Should Students Continue State Testing During a Pandemic?

Last year, Secretary of Education Betsy DeVos granted waivers to states seeking to suspend state testing required under the Every Student Succeeds Act. With the pandemic spreading across the country, it was clear that bringing students together for mass testing would be a disaster. This is a big deal, because our modern educational system depends on testing data to measure student progress, to evaluate the effectiveness of our schools, and to direct federal dollars to schools designated in need of improvement. Testing is one of the central benchmarks by which we know how we are doing. But is it wise to go back to testing before the pandemic has run its course? Health considerations aside, will we get reliable data from testing students who experienced academic disruption last spring and who are still experiencing so much disruption this fall? Will the data we gather be junk data, forever marked with an asterisk when compared to other years?

One thing’s for certain, Secretary DeVos has indicated that she is not willing to entertain waiver requests this year. She knows that the data directs the flow of billions of dollars designed to help schools improve. On another level, the politics of ESSA place the burden of school reform on schools to improve testing and other inputs.

As an avowed reformer, DeVos may wish to use the evidence of failing schools to advance her agenda in support of vouchers and other privatization elements. Opponents may argue that the system for evaluating schools is flawed and correlates heavily with poverty and other risk factors. None of Oklahoma City’s non-charter public schools received an A rating in 2018; no school in more affluent Edmond received an F.

Testing has its uses – think about how the ACT and SAT guide the college admissions process – but is the current incarnation of state-based testing effective? The evidence is sketchy on whether the tens of millions of federal dollars spent annually on Oklahoma schools on the needs improvement list actually helps schools improve.

There’s an old joke: a man walking down a street one night encounters another man on his hands and knees under a lamppost. ‘What are you doing?’ the first man asks. ‘Looking for my watch. I lost it across the street.’ The first man asks, ‘So why are you looking here?’ The second man replies, ‘The light is better.’

I see two possible explanations for the determination to keep testing: one is that testing serves a reform agenda that wishes to highlight what is wrong with our schools – so that we can shift more public dollars into the hands of private consultants or private schools via vouchers. The second possibility is bureaucratic inertia. We want the data because it is relatively easy to obtain, even if it may not be the best measure. We’re looking where the light is better.

But this crisis gives us an opportunity to rethink how we measure learning. Maybe we need a more qualitative approach to measuring what goes on in the minds of our children. We could include surveys from students, parents, faculty and staff as part of our measure, for example, balancing mechanistic measures with humanistic ones. This kind of locally-sourced input could give schools practical insights into how to improve learning for the students and the communities they serve.

Now that the election is over, we have an opportunity to rethink things. Maybe we need a system that serves kids first and bureaucrats second. As a teacher turned legislator, I say it’s time to look beyond the lamppost in search of better answers. 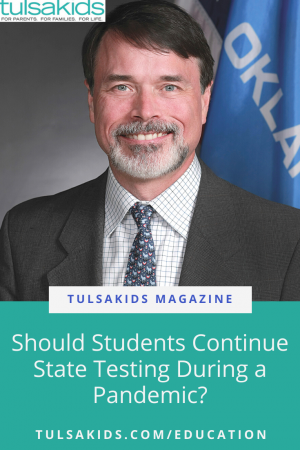