It's only mid-February, and already I am dreaming of those long, lazy summer days.

As a high school tutor, I can see the stratification between grade levels with the clear definition of sedimentation on a rock face. The sophomores buzz and pop like Rice Krispies, many still unable to sit still for long, groaning audibly with commentary to make grandmothers blush when assigned work. The juniors are alert and focused, the impending pressure of the future having just recently begun to weigh on them; they are kinder to each other and their teachers, becoming more comfortable in their own skin. The seniors tend to be more sedate, many of them exhausted from their full-time jobs and counting the months until graduation. By now, they’ve been accepted to college or made plans for next year, even if those plans are simply moving out of their folks’ house and into a future where they define the parameters rather than the Department of Education.

Many seniors have completed all but a few credits, which means most of their classes are virtual and their time is their own. It’s not uncommon to see them wearing their pajama pants to class, drinking Starbucks, curating Snapchats dedicated to their DIY parking spaces, carrying a mobile mini fridge in their backpacks. While they labor mechanically through writing Macbeth essays, their minds have moved on to the next stage of their life, and they are daydreaming of that freedom on the horizon.

It’s only mid-February, but my mind is already dreaming of those long, lazy summer days with my kids.

Don’t get me wrong; I love working at the high school. Having absolutely hated high school the first time around, one of the biggest surprises of my adult life is how much I enjoy spending my days with teachers and teenagers, which were essentially the bane of my existence back in my own teen years. I love spending my days among individuals whose minds are still open to the world, hearts are still kind and lives filled with potential. But after spending the last few summers off work and with my family, I’ve become spoiled.

Ever since I left TCC to take care of my mom, summers have come to mean an intersection between struggle and freedom. With no pay in the summer from my school gig, the pressure to write for pay is intense (but then what writers don’t thrive on pressure?), the food is pretty minimalist (Pasta-roni, anyone?), and the quest for free entertainment has never been more real. But I crave those long days of liberty in the bright, sweltering sun, my kids bouncing up and down on the trampoline, the Rolling Stones on the bluetooth speaker expressing sympathy for the devil, grass tall and dense in the neighboring acre, electric fireflies firing unearthly enchantments, hawks circling by day, bats swarming thickly overhead by twilight, gathering wood until my hands are splintered for long nights by the campfire with my family, the smell of ash and smoke and ember in our hair and sticky sweat. 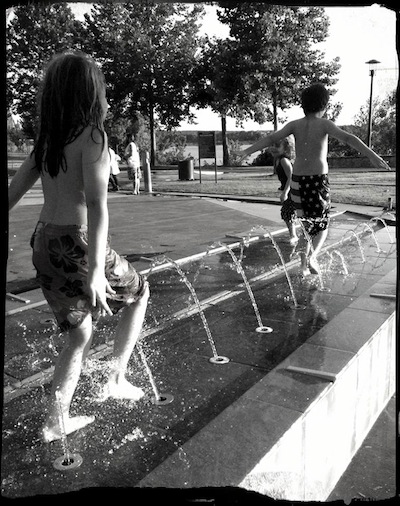 We will pile into the minivan and head to the Brookside Library, relish in the icy coolness of the air conditioning as we collapse into chairs with red Twizzlers, feel the matte of paper against our fingertips, lost in pages and adventures. We will decorate ourselves in floral crowns and velvety cloaks and abscond to the land of creative anachronisms where turkey legs and jousting knights and merpeople abound. We’ll hoard paper and art supplies and create magical and strange art and not-so-random acts of kindness for whatever GISHWHES is evolving into this year.

There will be blanket forts and Youtube belly dancing, Portal marathons, popsicles, and pool parties. We’ll stretch out across piles of cushions and blankets at the Admiral Twin drive-in for a double feature, where the first movie will be for us all and the kids will fall asleep by the second, making it the closest thing to a date we parents will get.

By late summer, when the unyielding heat permeates every corner of a house, we’ll seek refuge in dollar movies, smuggling in bags of Owencorn in my big purse.

Every day will be an expanse of family and light and laughing in the sun, iced coffee pitchers and peanut butter sandwich smiles, open windows and late night writing and board games and pictionary.

If you see me gazing out the window distractedly during the course of my day, don’t worry. It’s only senioritis.