I don’t have the rockin’ pneumonia, but I’ve had more than my share of the boogie woogie “grandparent flu” this year. As I write this, I am recovering from about my tenth go-round with a bad cold in the last four months. Ok, that may be a bit of an exaggeration, but this winter I’ve felt like I am constantly on the verge of a virus, in the midst of something or recovering from something. If the medical community hasn’t officially declared there is such a thing as the “grandparent flu” then consider this breaking news!

With our grandson on a recent trip to Mother Road Market. Callister loves to play in their toddler area.

I think of myself as a healthy person, but this dreary season has proven otherwise. I blame it on my grandson. The blonde, blue-eyed, perpetually smiling picture of joy and happiness is actually a façade for his true identity: one giant petri dish. He’s the Trojan Horse of germs. I’m convinced it can’t be an accident that his presence in my life has correlated with a drastic increase in my number of sick days.

Since his dad has become a full-time stay-at-home parent, I no longer provide child care, but we still see each other several times a week. Our special Grandmom-Callister day is Wednesdays when we go to story time at Schusterman Benson, stay at the library for stay and play time followed by lunch and a trip to Jamba Juice. My grandson loves playing with the other kids at the library, and I cringe as they swap slobbery, germ-laden toys back and forth. Trying to stop toddlers from putting toys in their mouths is like trying to stop the rain from falling or the wind from blowing; it’s not going to happen.

Traces of Jamba Juice happiness on his smiling face!

We’ve also been to two Hot Toast concerts in the last few weeks, and Callister has thrown himself whole heartedly into the throng of music-loving toddlers. During these kid concerts, my grandson makes it his personal mission to trade musical shakers with at least ten other kids. He loves to socialize and he loves to share, two qualities we don’t want to discourage, but two qualities that mean my grandson, as cute as he is, is a walking, dancing conveyor of sick germs. 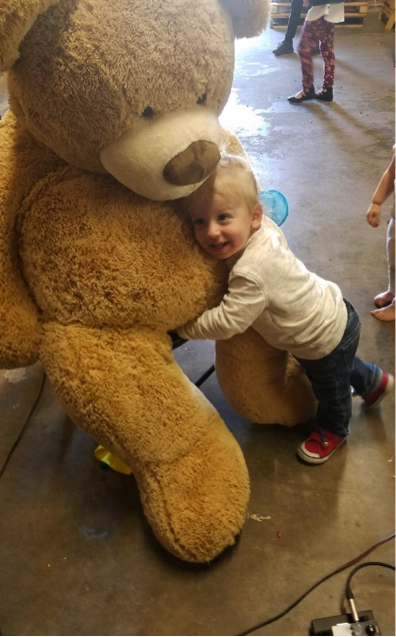 Callister at a recent Hot Toast concert. He loved hugging their giant teddy bear. There couldn’t possibly be a germ issue with that, right?

Yet, in his twenty months of life he has skated through with barely a sneeze. I’m grateful the sweet boy hasn’t suffered much and even when he has had a virus, he’s bounced back like a superball (a reference only a baby boomer will get). He has an enviable immune system much like his mom, my firstborn, has always possessed. The luck of genetics plus youth on his side means the few times we’ve had the same symptoms he’s recovered in less than half the time it’s taken me. I guess living sixty years takes an invisible hit to the immune system. Or maybe I just need some time to rebuild my immune system. When I was teaching, I developed a tough immunity because I was exposed to over 200 kids each week.

I respect the fact my grandson’s parents are not the germ-squeamish type. Of course, they want to avoid him being around anyone who is actively sick, and until all of his vaccinations are complete, they’ll try to limit exposure to children that aren’t vaccinated, but as far as the garden-variety germ exposure goes, they are laid back. My veterinarian daughter has an undergraduate degree in molecular biology and biochemistry, so she knows scientific evidence supports the idea that exposure to germs strengthens the immune system.

In fact, one study showed that children whose parents picked up a dropped pacifier, licked it and popped it back in the baby’s mouth had stronger immune systems. Numerous studies also show children who grow up with animals have a decreased chance for developing allergies and asthma. My grandson is growing up with two big dogs, a cat and parents that are chill with germs; he should have an ironclad immune system by the time he starts kindergarten! 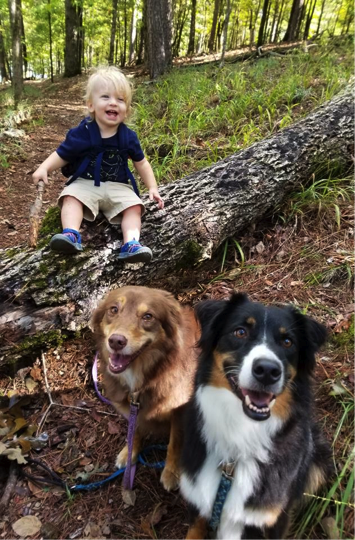 Callister with his dogs, or should I call them his “immunity boosters”?

But where does that leave the virus-vulnerable grandmom? I’m wondering if this will be a repeat of my teaching experience. My first year as a teacher I caught every bug that came along, I was like a magnet for the crud. As time went on, I became less vulnerable, and that’s what I hope is going to happen in my grandparenting “career.” His first year of life didn’t count since he was mostly a stay-at-home baby, but since he turned one, he has been going to pre-school twice a week and swim lessons once a week in addition to once-a-week storytime.  Even if I continue to get sick via his germs it’s not going to change how frequently I’m exposed to this loveable little germ bug. Being a part of his life is so integral to my mental well-being and happiness quotient I’ll just have to buy stock in Nyquil and Kleenex. He’s worth every sniffle and cough! 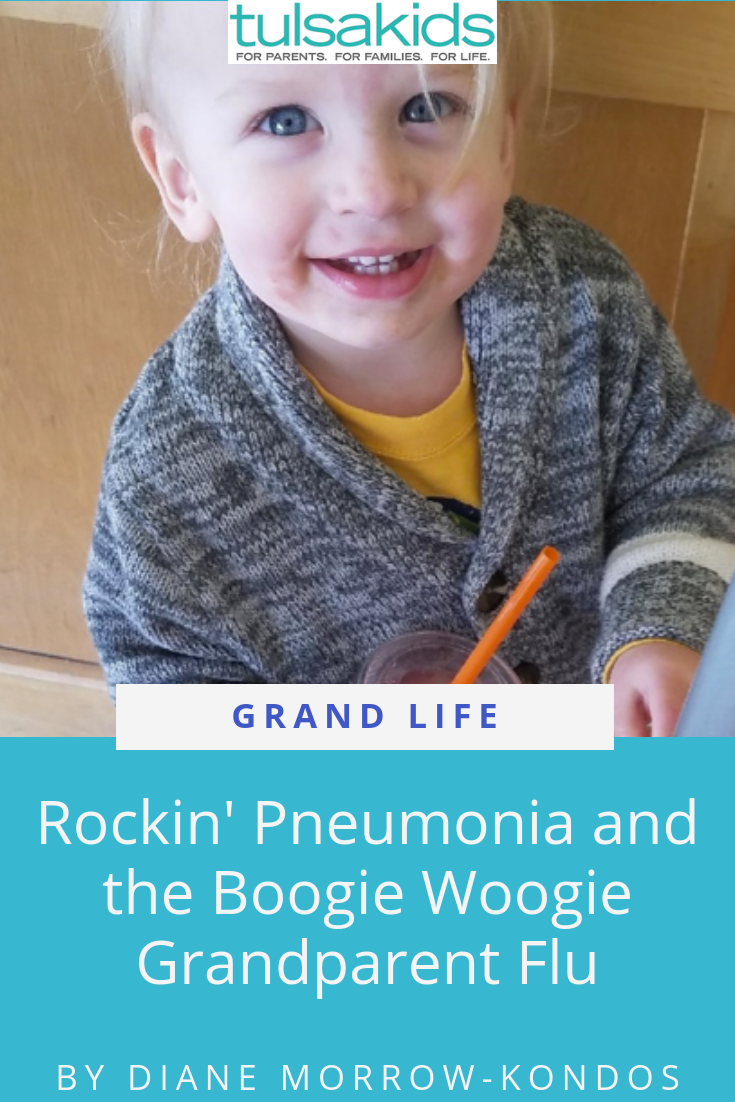