This month I’m so excited to get to share with you the musings of one of my biggest homeschool inspirations, Julie Lyles-Carr! Julie is a mother of eight, a pastor at LifeAustin, and author of the book, Raising an Original. I’ve known Julie since her kids were little and if the proof is in the pudding, then the Carr children are certainly the pudding. They are all bright and beautiful and succeeding in all kinds of different ways!

I recently asked Julie a few things about her experience with homeschooling, and here is what she had to say:

Natalie: What was your first experience with the concept of homeschooling?

Julie: Honestly, my first impression was that you must be insane to choose to do it. Why would you take a state-provided education and a free afternoon and give that up? Then my first child, Madison, attended preschool, and she was such an eager and ready learner that I became concerned that she might become bored in the kindergarten class the next year. At the time we were expecting a new baby, and I thought to myself, “Could life possibly be simpler if I just let us enjoy the new baby?”, and because Madison was already on track with her learning, we decided to try it. It was an experiment, and I certainly didn’t think then that it would be how we would end up handling school from then on!

Natalie: I’ve heard you say homeschool is a choice you make year by year, sometimes day by day! What were some of the markers that made you see that what you were doing was working?

Julie: I think when I finally allowed myself to let go of some of the markers I was looking to emulate in the traditional school process. I started out creating rigid schedules. I was doing little desks. And I was doing that not because I saw any evidence it was more successful as an educational model, but because I felt like I had to prove that we were educating them. I had in-laws and parents who were big believers in education, and I felt like I needed them to understand what I was doing. When I finally allowed myself to let go of those expectations and saw everything was still working, it made me go, “Wow, the human mind is made to want to acquire information, and if we can get out of the way, it’s amazing what can happen.”

Natalie: In your book, Raising an Original, you talk about the rewards of parenting to your child’s unique strengths. How did homeschool play a role in this idea?

Julie: When you homeschool several kids, you realize very quickly that just because something worked for one person, that doesn’t mean it’s going to work for the next person. One of my kids could just not sit still. I really can’t imagine how he could have sat at a desk. It would have been miserable for everyone! But put that kid on a treadmill, and he can learn just about anything! Then, of course, our daughter Maesy, who is hearing impaired, the different ways we were able to cater to her learning were really important, and then again with my daughter Merci, who had a stroke at birth. We’ve been able to respect where everyone is and meet them there.

Natalie: Probably like many people, when I started homeschooling, I was really only thinking about my kids, but actually it turns out homeschooling can be just as transformative of you as it can be for your children’s education. How do you see your own journey through this experience?

Julie: I am an oldest child, and I was always striving for the best grades. When I started to homeschool, in the way I went about it, I began to realize just how people pleasing and performance based I was. When you are doing something as rogue as homeschool, it’s very exposing of this way of thinking. You are already doing something that people don’t know how to affirm anyway, and it’s a lot of invisible work. So, I think it was a really important process for me to really disassociate from what everyone else was doing. It didn’t really matter what the free-range homeschoolers or the spreadsheet moms in my world were doing because I didn’t start doing this for them, I was doing this for my kids. We’re in this for the long game, and if I can raise kids who know how to learn, know how to go find information for themselves and are bought into the idea of being lifelong learners, then I’m calling it good. That realization has been an important part of the journey for me.

Natalie: Julie, I’ve known you for over 15 years and learned so much from watching you homeschool through the years. I know my mother-in-law, Diana, was just a few life steps ahead of you, much the way you are to me. Any pearls of wisdom from her that served you in your homeschooling?

Julie: When my kids were struggling with something, I’m a problem solver, so I’m always thinking we can “fix” this, and sometimes, you just can’t “fix.” And actually, I’m not sure we’re supposed to sometimes. I think we’re supposed to really see somebody, and honor them, and help them the best we can, to be who they are. I’m really thankful to Diana for that lesson. It was really powerful to have somebody in my world who just knew how to chill on stuff like that. I honestly don’t know how our homeschooling experience would have gone had she not given me the peace to just let them be. 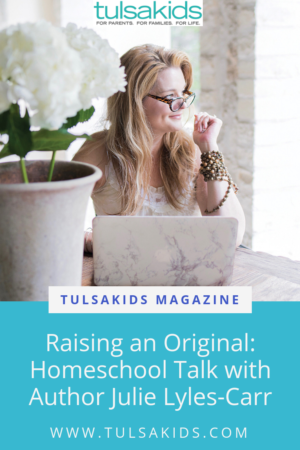