It’s that time of year. Uniforms are washed, school supplies purchased and pencils sharpened. Students’ brains are slowly awakening from their summer slumber, preparing to soak in a year’s worth of new knowledge and fill their heads with math, science, English and history. While most of these subjects are familiar to parents, some of the content has changed in the last decades as discoveries are made, wars fought and textbooks updated. When it comes to history, however, our kids will study a topic that many of us who grew up in this city never even knew about, despite the fact it happened almost 100 years ago in the heart of downtown. In the spring of 1921, Tulsa’s Greenwood District was the site of one of the worst incidents of racial violence in the history of the United States, and for over half a century, it was this city’s best-kept ugly secret.

For over 50 years, the Tulsa Race Riot (sometimes referred to as the “Race Massacre”) wasn’t included in history books or even discussed in class. Generations of Tulsans grew up completely unaware of the tragic events that took place just a stone’s throw from our ballpark and city center in an area that was once home to one of the most prominent and prosperous concentrations of African American businesses in the country in the early 1900s. At the end of May, 1921, an incident involving Dick Rowland, a young African American shoe shiner, and Sarah Page, a white elevator operator evolved into an attack on the Greenwood District and the people who called it home. By the morning of June 1, the once thriving African American neighborhood surrounding the intersection of Greenwood Ave. and E. Archer had been reduced to rubble and over 6000 of its residents imprisoned. Hundreds of people were injured or dead.

As the 100-year anniversary of these events approaches, plans are being made to commemorate the event. The Tulsa Race Riot Centennial Commission was formed to organize activities that will honor its victims and survivors, celebrate and revitalize the Greenwood District and educate the city, state and nation. It’s also a chance for a generation of young Tulsans to know and learn from history.

Hannibal Johnson, an author, attorney and consultant, is the chair of the Centennial Commission’s Education Committee. Johnson was the driving force in developing curriculum to educate teachers and students about the events of 1921. He believes in the importance of knowing and understanding our history.

“I crafted a catchphrase that summarizes my thoughts on the importance of history: ‘It is not possible to blaze the trails to our future unless we first retrace the footsteps of our past,’” he explains. “History offers context and, not infrequently, cautionary tales.”

According to Johnson, it’s important for educators and students alike to understand some key points about the Race Riot.

“The story of Tulsa’s historic Greenwood District is ultimately about the human spirit. The Greenwood District pioneers exhibited vision, faith, courage persistence and resilience – universally acclaimed core values closely associated with high character,” Johnson notes. “It’s impossible to understand the Riot without understanding what came before it – the robust entrepreneurial community, ‘Black Wall Street’ – and what came after it – the rebirth, against great odds, of a Greenwood District left for dead in the ashes of the 1921 massacre.”

“This was a period dubbed ‘the nadir of race relations in America,’ with rampant lynchings of African Americans, widespread racial conflicts in communities – often characterized as ‘race riots’ – and blatant social, political, and economic discrimination against African Americans,” he says. “Moreover, African American veterans, having just risked life and limb in World War I, came home, only to be treated as second-class citizens at best, sub-human at worst.”

Recognizing all of the many circumstances, socio-political environment and actions that led to the Riot is necessary in order to grow and learn from it.

“Leadership matters,” Johnson emphasizes. “Prominent Tulsans in leadership positions in commerce, government, politics, and yes, religion, failed the city in the run-up to and the aftermath of the Riot. Such leadership lapses must never be allowed to recur.”

Johnson is hopeful about the younger generation and their impact on the future.

“I am an eternal optimist, unapologetic about my hopeful outlook for race relations and racial reconciliation. That said, I am neither naïve nor oblivious to the missteps, setbacks and retrenchment that come with all forms of social progress,” he says. “Teens today are more open in all realms of diversity and inclusion, in large part because of broader exposure to diverse populations as we experience demographic changes and as the Internet Age narrows our world and broadens our reach.”

The Race Riot centennial offers an opportunity for growth for all of us. Parents can learn alongside their children about these tragic events of the past and how they impact the future of our city. Race Riot curriculum can be freely accessed online at www.tulsa2021.org. Other online resources include the Tulsa World, Tulsa Historical Society & Museum, and the University of Tulsa’s McFarlin Library Special Collections. Johnson also recommends a visit to the Greenwood Cultural Center and the John Hope Franklin Reconciliation Park. He’s written several books on the topic of the Riot: Up From the Ashes (for kids), Black Wall Street and Tulsa’s Historic Greenwood District.

“The Greenwood District still exists, not as a black entrepreneurial mecca, but rather as an eclectic arts, cultural, educational, entertainment, commercial and residential community,” he comments. “We continue to make progress. We continue to experience challenges. We must not get disillusioned. We must not lose hope. It’s imperative that we continue the work and take pride and comfort in the incremental successes we, through our own agency, are able to effect.” 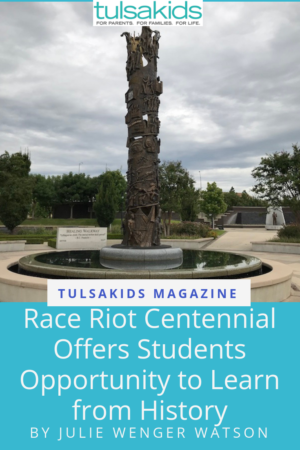