The 2018 election cycle is in full swing, and Washington isn’t the only place you’ll find a sea of new faces. Oklahoma has seen a record number of candidates file with the state’s election board this year, including many Tulsa parents who are new to the political scene.

Father of two Rusty Rowe clearly remembers the moment he decided to run for office. His wife, a University of Tulsa law student, had just returned from the state capitol where she had marched with the Girl Attorney group in support of public education funding.

“I was watching our best friend of 15 years go up [to the state capitol] to beg for funding for her classroom – for her kids to have the resources they need to learn,” he remembers. “Then my wife was there, with the attorneys, speaking to representatives that seemed to just be giving lip service.”

Rusty recalls feeling frustrated with the situation and thinking maybe he could do something to help. When his wife, Colleen McCarty, returned home from Oklahoma City the couple found they were on the same page.

“That night, I actually said to him, you should run,” she recalls.

But she wasn’t necessarily expecting him to say yes. In fact, Colleen admits to feeling some trepidation when Rusty told her that he actually did want to run to represent House District 66, which includes parts of downtown Tulsa and Sand Springs. The couple has two young children, and managing a campaign on top of their already hectic lives seemed like it might be too much at first.

Colleen says her fears quickly dissipated though. “We need him [to represent our community] and that is more important than any short-term fears I had.”

For many parents, having kids – particularly young kids – can feel like a real barrier to running for office. Having a strong network to lean on is key, and so is staying flexible.

“Things don’t always go according to plan,” acknowledges Rusty. “We are lucky to have an amazing support system of family and friends to help us. It makes it a little bit easier to figure things out.”

Colleen agrees that good support is crucial, but she also recommends reframing and embracing some of the challenges that come with a run for office.

“Sure you want to [do your best to] maintain continuity and structure, but I also want to teach my kids what civic engagement looks like… also, kids are resilient,” she adds.

While running a campaign and balancing family life is never easy, studies show that voters often see parenting young children as a bigger issue for female candidates than male candidates.

Amanda Douglas is a Democratic candidate for Oklahoma’s first congressional district, a seat vacated by Jim Bridenstine, who was recently sworn in as NASA administrator. Amanda gave birth to her first child, a daughter named Charlotte, less than two years ago. 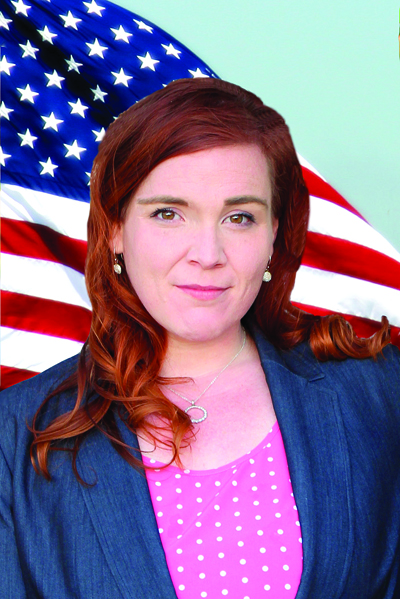 “I’m at a point in my life right now where the future of our state and our country have become more meaningful to me than [at any point] in my entire life,” says Amanda. “Becoming a parent really makes you stop and think about the legacy that you’re going to leave behind for the next generation.”

Amanda says her perspective as a new mom actually added a sense of urgency to her desire to run for office.

“When I looked at what was going on in the world after [our daughter] was born, I saw a lot of divisiveness and a lot of combativeness in politics and more importantly, a lot of decisions being made that I felt like were eroding the foundation of things that I think are really important in this country.”

When Amanda heard that Bridenstine wasn’t running for reelection, she began seriously considering a run for office. She set up a crowdfunding site to see if she could raise enough money to cover her filing fees. Amanda hit her goal in a matter of days, and she took it as a good sign that she should proceed with the campaign.

“I thought, you know, this is a way that I can actually try to do something,” says Amanda. “Eventually, somebody actually has to be the one to say, OK, I’m going to try.”

Nicole Nixon is a Republican candidate for Oklahoma House District 68 and a mom to two elementary-aged children. While this is her first regular election cycle, Nicole did run for the seat last year in a special election following the resignation of her state senator, Dan Newberry. Nicole points to her children’s school closure as inciting her passion for politics.

In 2017, the Tulsa Public School Board approved a consolidation plan that closed three west Tulsa elementary schools, moving students from those schools into one building that previously housed Clinton Middle School. The consolidation was made in anticipation of cuts to state education funding.

“When they announced they were going to close our schools, I jumped into action and tried to fight it as hard as possible, because these are my kids,” says Nicole. “This is my neighborhood.”

While she initially considered running for the school board, when her state senator resigned, she made the decision to run for his open seat. Nicole says she saw it as an opportunity to deal with the root causes of the funding issue.

“It’s frustrating because nobody’s really looking at the full scope of the problem,” says Nicole.  “They’re just trying to drive a narrative to get those specifics that [they] think we want…I don’t think that’s a correct way of going about solving anything.”

While many first-time candidates find success campaigning as political outsiders, some voters can see lack of public service experience as a downside. Amanda believes that her professional experience as a business analyst is a natural fit for politics.

“I go into companies and ask…where do you have pain points? Then we basically figure out what their actual problems are, because they’re not always the same thing,” she says. “We have to come up with different solutions, prioritize which we’re going to try, and gain consensus… I feel like that experience is really going to translate well.”

Rusty agrees that many of the lessons he learned as a small business owner are actually highly applicable to public office.

“I have owned a restaurant. I have managed large crews from really different backgrounds… I understand it’s hard,” says Rusty. “I have been in situations where you have to find a way to move forward. [As a small business owner] you actually have to solve problems, not just put them off for the next day.”

Many parents cite their children as motivating factors for running for office, but it can be a little bit harder to get the kids engaged. While Rusty’s son is too young to understand the electoral process, he and Colleen have explained the basics to their 6-year-old daughter.

“We explain voting to her [in ways she can understand]. Like, if some kids in your class want pizza and some want tacos, and more than half the class wants pizza, you order pizza,” explains Rusty. “She understands a lot. I think I overload her sometimes, but hopefully some of it sticks.”

Nicole says her family has been very supportive of her candidacy, and her kids have been with her every step of the way. She says when they heard about the school closure in their neighborhood, her children attended public forums and wrote speeches to express their point of view.

“I wanted [my kids] to understand that they have just as much of a voice as anybody else around them,” says Nicole. “So while they get a little tired of the door knocking, they still understand that we’re doing this for a really good reason, and nobody’s going to fight for them like [their mom].”

So what’s the biggest lesson these new candidates have learned so far? Encouragingly, it’s that there is plenty of common ground.

“We are not really as divided as the radio and the TV tell us we are,” says Rusty. “When you talk to people, everyone cares about their family, everyone cares about safety… We have our differences, and that’s why we should be talking to each other, but everyone has the same core things we need in our life.”

Nicole says if an idea is a good one, it doesn’t matter to her where it comes from.

“First and foremost, my children are the most important thing to me in the world,” she says. “I want what’s best for [my kids] no matter what.”

On June 26, Oklahoma voters will have the opportunity to determine which candidates will face each other in November’s general election, and they will also weigh-in on state question 788 which addresses the legalization of medical marijuana. Republican primary races are open to voters who are registered as Republicans. Democratic primaries are open to both Democratic and Independent voters.

Fathering our country — and a 2-year-old