The Little Podcast That Could

I am going to talk about that and also my most recent fundraiser for Tulsa Public Schools in today’s article. And of course, Rocklahoma.

Yes, on August 20, Poison headlined a sold-out concert at BOK Center. Opening acts were L.A. Guns and Cinderella’s Tom Keifer. My twin sister Lynda is a huge Tom Keifer fan, so she and her husband flew up from Austin to go to the concert, and visit with her niece and nephew. And it was kind of a belated birthday celebration since our birthday was on August 7.

Being in rock radio for over 20 years, I’ve come across a handful of Rockstars, and it has been a pleasure to meet, hang out with and interview Bret Michaels of Poison. He is currently on a stadium tour with Def Leppard, Motley Crue and Joan Jett. His band Poison was able to break away from the tour and do a “one-off” concert here in Tulsa.

I got a chance to do a phone interview with him a few days before the concert. The night of the concert he invited me backstage to hang out for a bit, which was totally awesome! He is one of the nicest Rockstars (and persons) I have ever met. He’s funny, witty, and always concerned with how I’m doing. You know how some people you can tell are fake? Well, with him you can totally tell that he is absolutely NOT fake!

He asked me what I have been up to since the last time we spoke. I told him I had changed radio stations from KMOD to The Eagle and that I had also started my own podcast called Tulsa Rocks. I brought a Tulsa Rocks hat for him as a gift. He was so surprised and happy that he said he would wear it on stage, which he did for the encore!

Then he went even further and asked if I would like to get on stage before Poison and help hype up the crowd, which I did! It was so awesome and such a last-minute thing that it was completely surreal. Especially because I did not tell my twin sister it was going to happen, and when I walked out on stage, she was one of the first persons I saw sitting in the audience, so I was able to give her a shout out! 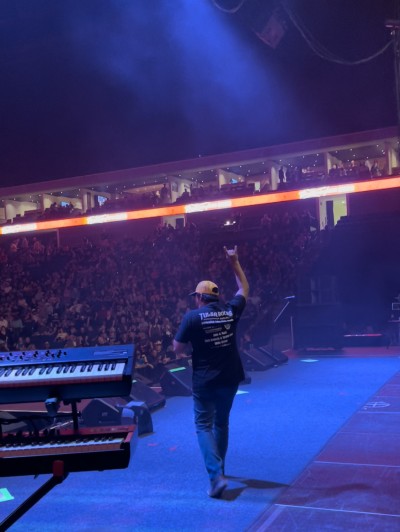 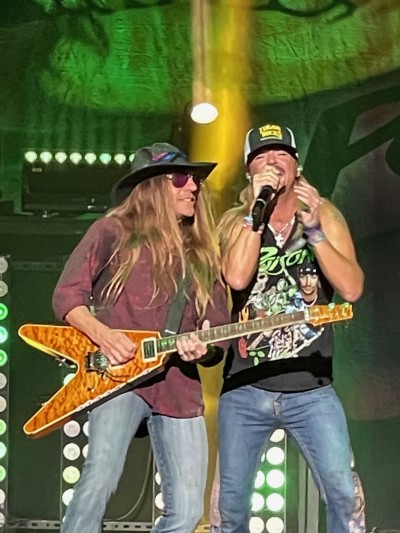 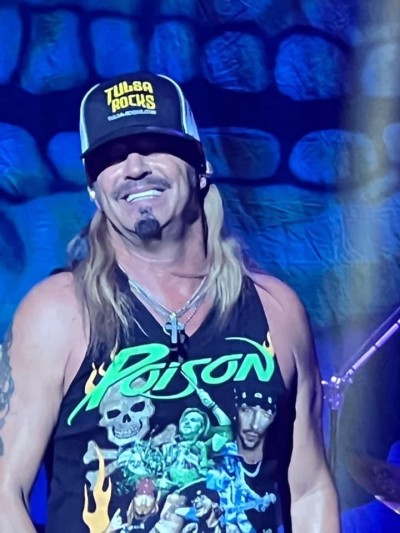 In my interview with him, he told me that his solo band, Bret Michaels Band, will be playing at Rocklahoma in 2023, so I highly recommend you checking them out.

Speaking of Rocklahoma, I’m going to talk about this weekend’s concert, but first, I have to mention the Black Crowes concert. I went to see them last week with my friend Kevin. The show was at Buffalo Run Casino in Miami, OK.

We made the decision on the day of the concert to go up there, rock out, spend the night at a hotel, and then have breakfast the next morning at a local restaurant. Remember, I am always eager to support local small businesses! The concert was great! The band Whiskey Myers opened up, and they were super awesome too.

The casino is 82 miles away. There were probably 10,000 people there, and who do I run into the next morning at this small diner in Miami, OK? My next door neighbor, Taina!! 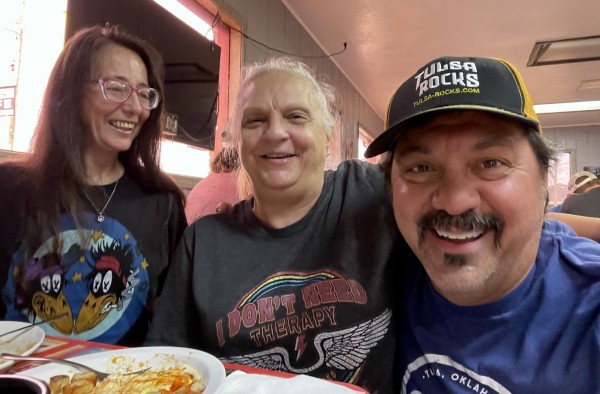 That morning we checked Google Maps and had 4 or 5 places to choose from, and we just happened to pick 2 Girls Cafe, same as my next door neighbor. What are the odds??!! They had a kinda creepy Wizard of Oz obsession decor, and the wait was long, but our waitress Jodie was funny, and the food was goooood! 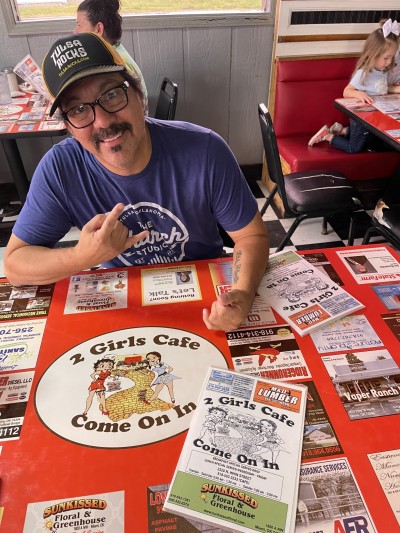 Last year I wrote an article telling you about how much fun I have there every year. And I do mean every year because I have been at every Rocklahoma since 2007. The festival is coming up this weekend, same place as always in Pryor, By Gawd, USA!

The headliners for this weekend are Shinedown, KoRn, and Five Finger Death Punch. If you happen to be going out there this weekend, please make sure you go to the right radio station booth on “Radio Row,” 103.3 The Eagle! I will be checking in with highlights on our Eagle and Tulsa Rocks social media pages. 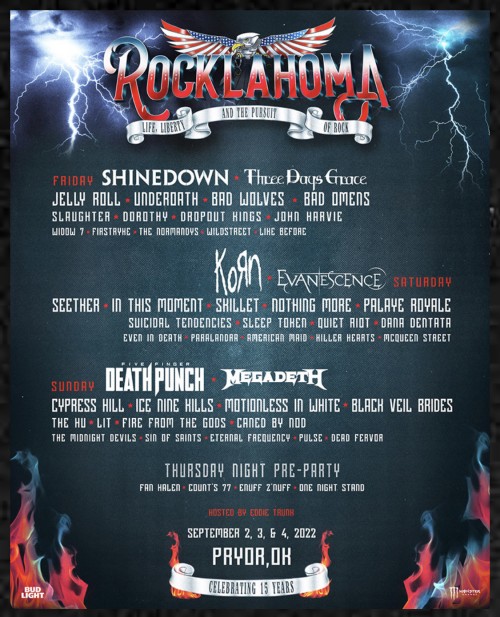 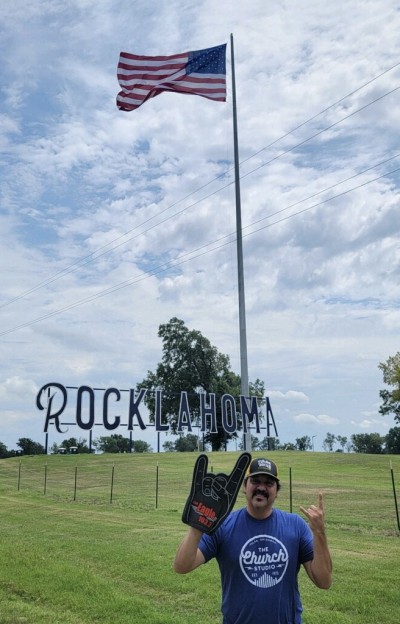 Busy weekend for me as I am also throwing out the ceremonial “first pitch” at the Drillers game Saturday night at one ONEOK Field!!

It’s “103.3 The Eagle Night” so be sure to cheer me on real loud if you go to the baseball game. And don’t laugh if I don’t make it over the plate!

Lastly, thank you so much to Brena Meadows Thrash, Aleksandra Kitchens, Penny the music teacher at Daniel Webster High School and all at Foundation for Tulsa Schools for helping me with my fundraiser. My podcast, Tulsa Rocks, was able to donate $1000 to the music department to help our future Tulsa Rockers continue to create that “Tulsa Sound.” 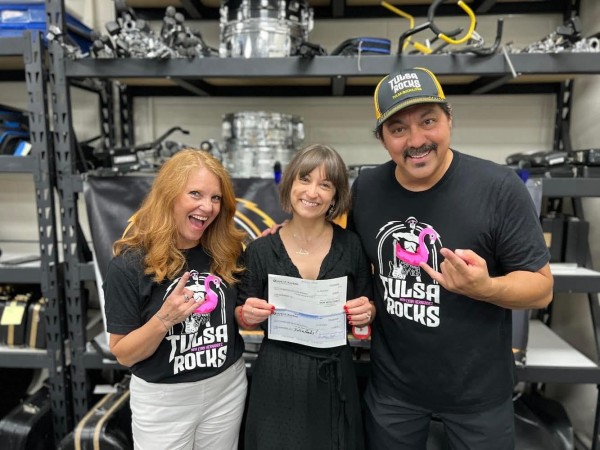 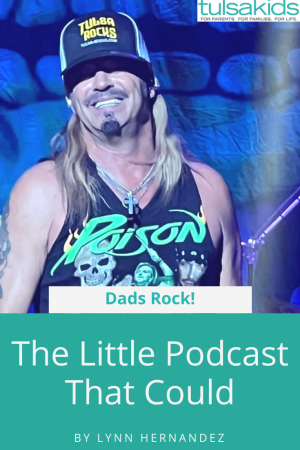