What did you do to celebrate Labor Day? I honestly didn’t think we would still be fighting this pandemic, so the reality of having my mask handy was a surprise, but I did. I must admit I have not had it on as much as I did a year ago, but then I am now vaccinated and more that half Americans are. But I had it with me all weekend at Rocklahoma. My friend Doug Burgess, who runs the stage I hosted, made special “DEB Concerts” masks. 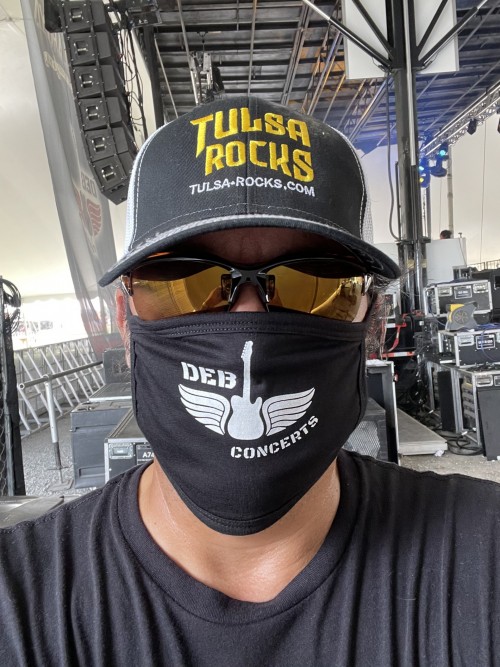 Ever since graduating college, I have had a job over Labor Day Weekend until now, so that alone was not much to celebrate. But I’m happy for those who DO have jobs and have been laboring, so I celebrate for you! Also, Labor Day weekend has always been the weekend we celebrate my older brother’s birthday until 11 years ago when he passed. But again, Rocklahoma and all its wonderful chaos to the rescue, to keep my mind from falling too far down the depression well. 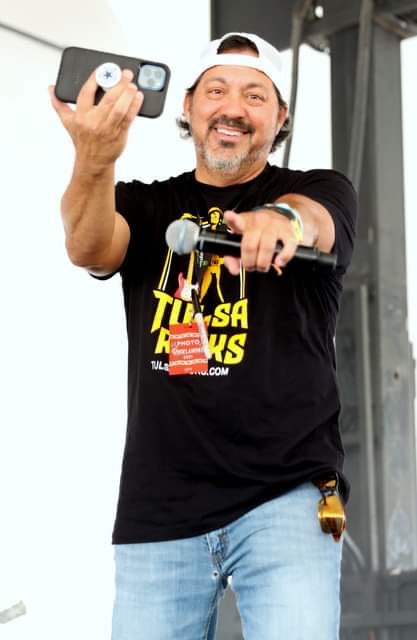 A week later, a somber reflection of 9/11. This year being the 20th anniversary makes it seem so long ago for those of us that were aware of what was happening when it happened.

I promise not to say another word about Rocklahoma for at least another month, or two. It’s been such a huge part of my life for 15 years that I love talking about it and hyping myself up for it. And this year was probably the most fun I ever had. Maybe because it’s been over two years since the last Rocklahoma, or because some of my favorite bands were playing like Candlebox, Halestorm, Steel Panther, etc., or because I was on my own and not being pressured by others to do things a certain way. Most likely all the above. But, as always it’s the love and support of the fans I ran into over the weekend that really was the star of the show. 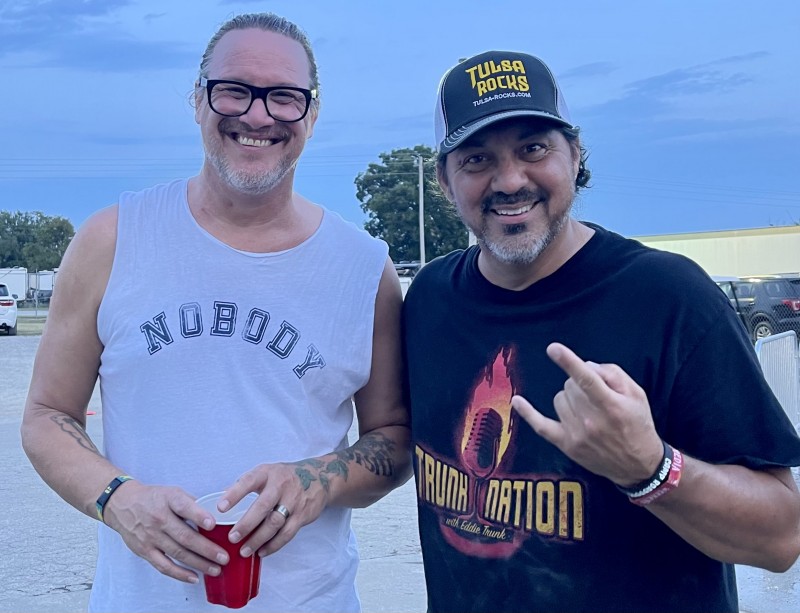 Me backstage with this singer of Candlebox, Kevin Martin

It had been 830 days between Rocklahoma. For some, waiting 365 is too much. The anticipation of finally having it and on Labor Day weekend was a lot to take in. Hoping for more pleasant weather proved to be almost a squashed dream because even though it was Labor Day weekend, it sure felt like any other Memorial Day Weekend, just with much less rain. Regardless, it was finally going to happen and we were all super stoked. 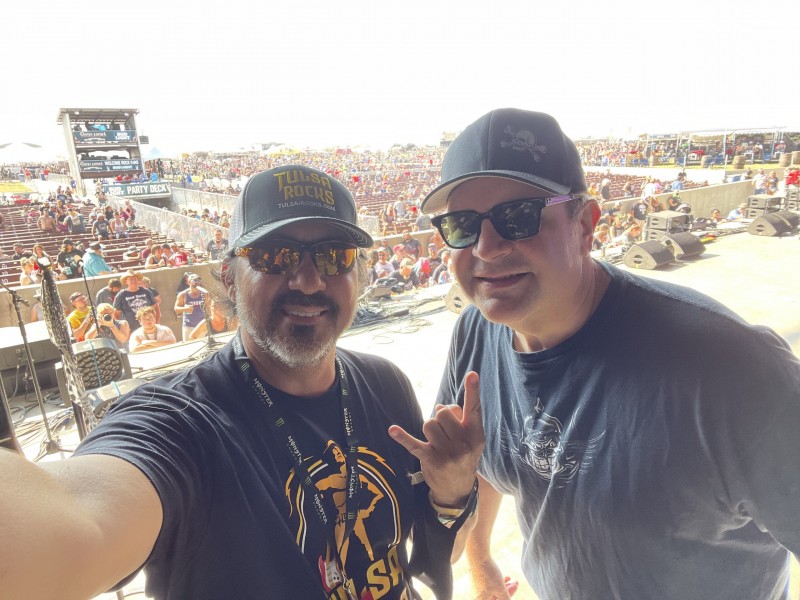 The bands were all great and only a couple lineup changes but honestly, for me, losing Limp Bizkit (Covid concerns) and gaining Halestorm as a headliner make it even better. I was looking forward to seeing Phil Enselmo doing a set of Pantera songs (which he hasn’t done since the band broke up). However, being from New Orleans, Phil felt it best to go home to pick up after Hurricane Ida. Can’t blame him.

After being on the radio for all 14  Rocklahomas, I knew things would “feel” different, I just didn’t know it’d feel better! Every fear I had had, hoping my fans hadn’t forgotten about me, was quickly put to bed when I had many, many people come find me to take a selfie and say “Hi.” And my RV neighbor, whom I had never met, came over to me when I was unloading my car to say she watches my Facebook Live videos all the time. Not one word about me being a radio DJ. Wow! Sidenote: It’s not a coincidence I started my OWN radio station during Rocklahoma weekend. I started it the week before and played nothing but bands that were at Rocklahoma, and commercial free! You can hear it at: www.Tulsa-Rocks.com. It’s called: “Tulsa Rocks Radio.” 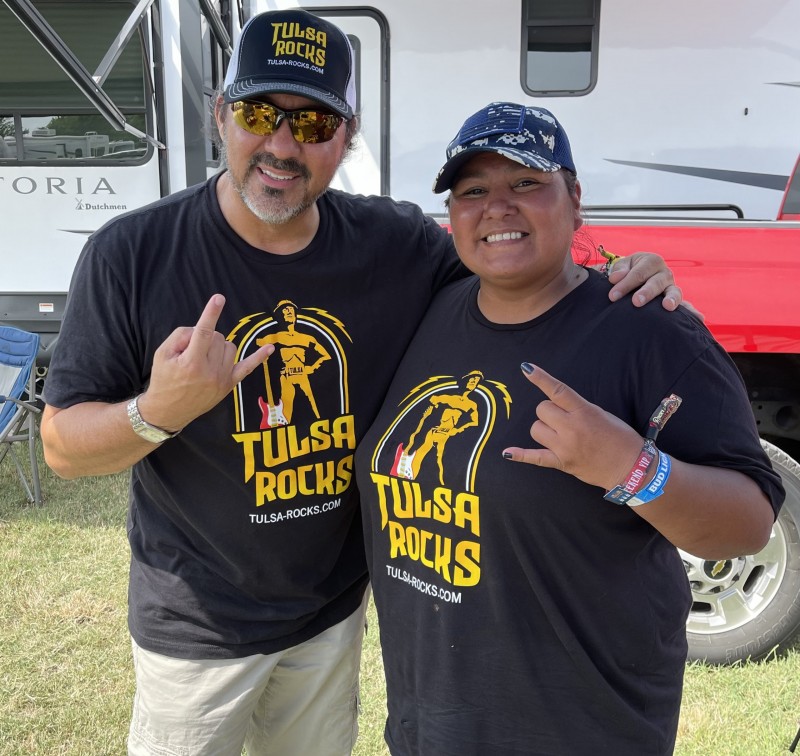 And all the unnecessary stress I had to endure from the previous Rocklahomas was gone and not missed one bit.

So, if the festival stays on Labor Day weekend (and all signs indicate that it will), then we have 356 days till I start packing the cooler and suitcase again!

What can you say about this time of year? We can talk about what we were doing “when the second plane hit.” If you’re old enough to remember what you were doing, I’d love to hear your story. Please email me: Lynn@Tulsa-Rocks.com. I’ll just tell you my story:

Growing up in a small town in Ohio with a twin was one reason why I had always wanted to visit the twin towers, with my twin sister. So finally, we did! And it was just six weeks prior to 9/11. My sister is a huge Bon Jovi fan and they were playing at Giants Stadium that summer. Being on the radio, I made some calls with my friends in the biz and got us free tickets. It was a trip of a lifetime. And we did as much sightseeing as we could because who knew if I would ever get a chance to go again. A friend told me before we went to definitely go to the World Trade Center and take the tour to the observation deck, which we did. And… oh my, what a view! It was on the ROOF of the Twin Towers! I remember chatting with the elevator operator and gift shop cashier (yes, I’m that guy) about their job and where they’re from. And then, just six weeks later…. 9/11. I watched it all come crumbling down and cried. I was on the phone with my sister. She was still living in Austin, but I had just moved to Dallas that weekend and was working at 102.1 The Edge, a iHearMedia radio station. My friend Ayo had invited me to work in DFW and said I could crash on his couch till I found a place.

My sister and I were on the phone but not saying anything, watching the horror take place. I could still clearly see the faces and smiles of the elevator operator and gift shop cashier and wondered if they were OK, hoping they had both missed work that day for some reason.

In my previous job, the radio station was on the 5th floor and many times I would take the stairs. I struggled with those last few steps.  Every time, I would think of those brave men and women firefighters that, with all that heavy gear, ran UP those stairs on 9/11 only to most certainly never come back down.

To this day I find it hard to watch documentaries about 9/11. This is the one that coincidentally was being filmed on 9/11 at Ladder 1 in NYC.

The footage is incredible and the only way I can watch it is with a box of tissues and alone: https://www.amazon.com/11-Filmmakers-Commemorative-Tony-Benatatos/dp/B005LSX90O

This is why this week the non-profit I am supporting this week is the 9/11 Memorial fund: www.911Memorial.org

My twin sister and I have been back to NYC, two years after 9/11. Bon Jovi did a benefit concert and yes, there wasn’t a dry eye in the house.

I hope we can take away from this past weekend a sense that we all had after 9/11, our country was one and we need each other. Together is better.

Hug, love and appreciate your loved ones every day. #NeverForget 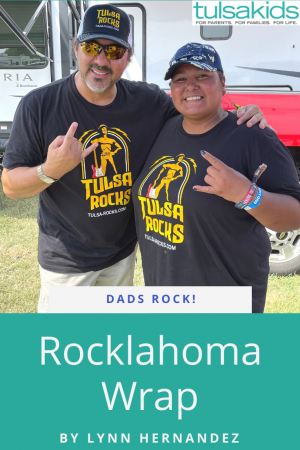 I am a single dad of two, one 11-year-old boy and one 7-year-old girl. I grew up in Ohio, moved to Texas to be with family then moved to Tulsa in 2005 to continue my career in radio. In this blog, I will write about life as a single dad raising two kids in the Tulsa area. My passion is helping others. I encourage my children and others to do the same. Each week I choose a different charity and spend that week volunteering, donating $ and sharing my journey on social media so you can join me! You’ll see what great people we have in Oklahoma and some of the ways you can help make Green Country better for all of us.

If you are passionate about a non-profit, please reach out to me and follow me on Twitter at “Lynn Hernandez” and perhaps I can write about them! Also, check out my website: https://www.tulsa-rocks.com.