I had forgotten how extra rad it is to have press access.

When Tara asked if anyone was free to cover the Broadway production of Finding Neverland, I was super down. I’ve only ever seen one other such production. Before my mom died, I went with her and my aunt Sandy to see Wicked, and it rocked my face off all the way up in the balcony. I knew I would take Lucy, who absolutely adored last year’s trip to see Tulsa Ballet Company perform Swan Lake.

Both of us fretted over what to wear, neither of us being the kind to waste an opportunity for digging into the fancy corners of our closets where lace and tulle reside. Decked out in our second and third fanciest attire respectively, Lucy and I spilled out of our Honda Odyssey onto the sidewalk of the Tulsa Performing Arts Center, heavily armed with purse snacks (and for Lucy’s part, purse plushies) and ready for a legit theatrical experience.

Had Lucy and I simply dressed up and milled around the lobby for a while, we would have had a perfectly wonderful evening. My pint-sized companion was taken with the spectacle of it: the little merch counter with its branded jewelry and attire; the ushers and doormen wrapped in their deep burgundy blazers and charm; the patrons in their finery, bedecked in bright, glittering costume jewelry, shiny stilettos, bowties, pocket squares, and oxfords.

We stopped to snap a couple of pics at the little photo booth, waiting in line after a mother with three little boys not very unlike the Davies boys from the story–scrappy, handsome, playful, and sharp–before stopping at Will Call. 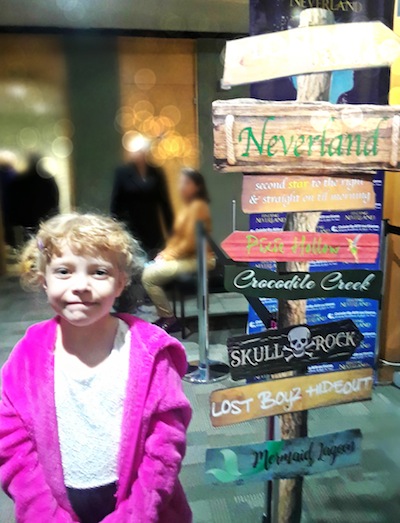 The path to Neverland.

Now, I have never in my life had orchestra seats for anything. Last year when my work scored us tickets to see Swan Lake, we were up in the mezzanine–not quite the nosebleeds, but pretty standard prole seating. When I saw the “OR” on my tickets, I was cautiously optimistic, optimistically skeptical. Did this mean what I think it meant? Surely not. I’d better not say anything to Lucy. “Hey Lu,” I nudged her, directing her up the steps to stage right (that’s regular left for you non-high school thespians).

I had never been on that level, literally or metaphorically. Elation ran through me as I rushed Lucy along back into the open lobby again, now one floor up, alongside the large, hanging glass panels clearly meant to imprison Superman villains. “Are we in the right place?” I asked each usher we passed cautiously. Could it be? It felt like we were getting away with something. “Oh my gosh, Lucy! These seats are really good!”

Another usher urged us even further forward. “You’re Row L.”

Lucy and I shared a telepathic glance–L for Lucy! L for literal perfection! The crimson-wrapped volunteer grinned at Lucy as my cupcake girl Tigger-bounced down the aisle in her black-and-white tulle formal gown. The older woman gushed to Lu, “I love your hair color!”

Lucy beamed and thanked her, bobbing her Harley Quinn-painted twin buns from side to side gleefully. “It’s genetic,” I teased dorkishly, gesturing to my own muppet-esque rainbow locks. My awkwardness was cranked up to its highest setting. 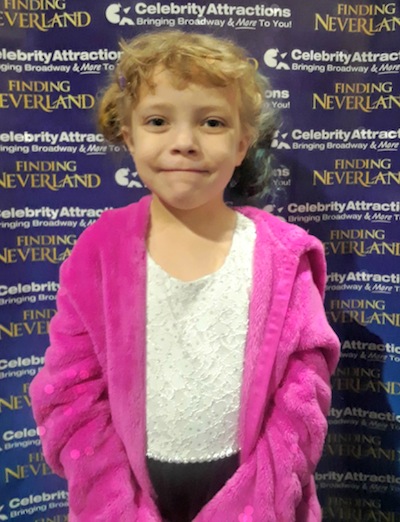 We slipped into our row, which was still only about half filled, past the lovely LeAnne Taylor, who is just as beautiful in person as she is on TV. Having admired her since I was 8 years old, I was slightly fangirling, so I pressed myself mentally: Don’t say anything. Don’t be weird. She’s so pretty, like a human sunflower. Shut up.

When the local anchor smiled up at me cheerily, my stupid mouth made nonsense come out of it. “I know you!” I muttered through a cheshire cat grin. Gratefully, she did not look alarmed, holding her smile as I sideways shimmied past her the way you do at the theater when your child-bearing hips are the only thing wider than your weirdo personality.

Look at us, I thought, sitting up here next to the legitimate press. Then it occurred to me:

I am the legitimate press.

We moved to nearly the very middle of the auditorium before we sank down into our seats, numbers 7 and 8. Lucy pulled out her Five Nights at Freddy’s Funtime Foxy plushie and positioned her so that she could see the show while I glanced around us to see if anyone else was completely freaking out over how good their seats were. As the theater filled like a bag of popcorn inflating with air, we snapped a couple of selfies (like you do) and talked about how much fun we were having.

“You’re my best friend, mom,” Lucy assured me, placing her small hand in my own. I passed her a purse Twizzler as I tried to sop up all of my gooshy feels with my sweater. I gazed into her wide-set ocean water eyes; she was perfect, perched there on her booster seat, a wild pixie pirate straight out of the world where lost boys run free and mermaids sing in lush lagoons. 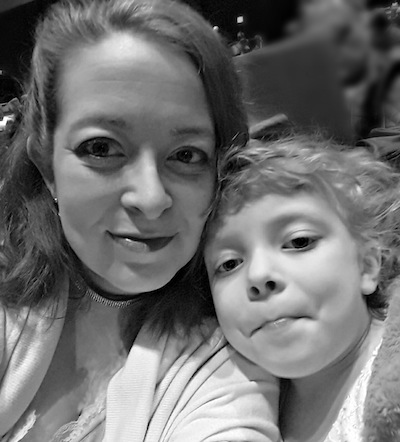 Requisite theater selfies are the law.

The lights dimmed, the crowd swept into a sudden hush. The story came to life before us, the real life of a writer struggling to find his way in a world of adult troubles, the ache of it, of longing and loss, of disappointment, of pressure, of fear and release, beautiful moments tucked in and wrapped up and tangled between stinging heartache and the urge to create something that moves people.

It spoke to me, grabbing me in my gut the way a musical should. I watched my daughter, transfixed as she was. I remembered my old copy of the novelized Peter and Wendy, its deliciously ancient faded grey cover and spine. When I read it as a middle schooler, it at once broke my heart and filled me with optimism, the tale of how Wendy grew up and left Peter behind, how he is still probably playing there among the pirates and the mermaids a hundred years later. The musical carried me to the same place where melancholy and light dance together, telling the story of playwright J. M. Barrie as his life intertwined with the Davies family through the loss of their patriarch to cancer, how the love he found with Llewelyn Davies and her boys damaged his own marriage and led to the creation of the ageless boy we know today.

I didn’t know any of it, the tragedy of it, how Barrie sat with the Davies boys in Kensington Garden, weaving a tapestry of nonsense into the rich worldbuilding of Neverland inspired by one of the Davies sons, Peter, how he befriended the family only to watch both parents die of cancer within a span of three years. It was a strange juxtaposition, the merriment and uplifting spirit of the musical against the utter tragedy of the family’s lives. Lucy and I were spellbound as Barrie’s imagination took him to Neverland and into the “circus of his mind.” The performers were spinning magic, pure, soul-lighting sorcery.

Near the play’s climax, the play-within-the-play leads to Tinkerbell’s near-death, and the (real-world) audience’s children are beckoned to clap if they believe in fairies. If I could bottle the emotion of watching Lucy explode into clapping, I would save it for the darkest hour of my life knowing that if Lucy could revive a fairy with her child’s joy, she could revive a sad heart. It was glorious; every child around us erupted into enthusiasm, clapping until Tinkerbell danced back into existence. And then a moment later, Llewelyn Davies flew away with Peter Pan to Neverland in a beautiful expression of the transcendence of death amid an explosion of fairies and dancing light.

In the dark, I mouthed the words, “Peter Pan is Barrie.”

There should be a word for the somber mix of melancholy, optimism, and catharsis that happens when something is at the same time sad and beautiful and hopeful. Fortunately, I had the denouement to wipe the raccoon mascara from under my eyes before the house lights came up. As we stood to give the gifted cast their much-deserved standing ovation, I scooped Lucy up by the legs so she could see, hovering awkwardly. Her face sparkled like Christmas Eve.

She hugged back, that warm second where the energy of spirits glows between you.

It was a perfect moment; I longed to wrap the moment in tissue paper and tuck it away forever in the Lane cedar chest my mom left me when she died.

The lights went up, and we gathered our things. I blinked my dry contacts back to life and checked my phone, where a text from Justin and the real world waited:

I’m parked on 3rd St. Let me know when you’re out and I’ll pull up to the front entrance.

We exited the building to the cold air on the street, past the shuffling crowd, past a street musician and a tall man asking for change. I did not have any change; I had a half a purse Kit-Kat if he wanted it. He said he did.

In the car on the way home, Lucy told Justin, “When I grow up, I want to be two things: a cupcake baker and an actor in the theater.”

“I think that would be very nice,” Justin replied.

Thanks so much to Celebrity Attractions and Tulsa Performing Arts Center for providing a beautiful evening.

Celebrity Attractions has a full season of perfect cedar chest moments ahead with their 2018-2019 Broadway season, so pick up tickets and let me know about your Broadway adventures in the comments!

Love to you all!