Finally, some plants we can't kill

It’s no secret that our family loves to play games. Board games, video games. Puzzles, Sudoku, logic problems, card games. At any given time, I have a running Words with Friends match going with my mother-in-law, Betsey, who, in traditional Owen fashion, regularly annihilates me as if she is brushing a crumb off of her shirt. While my Facebook pals were commiserating over casual Thanksgiving bigotry and manipulation at their family events, we were engaged in a wildly fun game of modified Loaded Questions with Justin’s lovely aunt, uncle, parents, and cousins.

All that is to say if it’s a game, Roe-Owens are usually down with giving it a whirl.

A few weeks ago, Justin reviewed Gnomes at Night, a fun little magnet-based cooperative board game. This time, it’s my turn to review a game, and just in time for holiday shopping, wink.

A little background on this game. Photosynthesis is an ASTRA award-winning game from the Blue Orange Games company. What is ASTRA, you may be wondering? It’s the American Specialty Retail Toy Association, not to be confused with the Australian Subscription Television and Radio Association or the Association of Swedish Teachers and Researchers in America, both of which also have their own ASTRA awards.

ASTRA’s focus is on independent toy companies and retailers, which let’s be honest is where all the super cool toys of the world exist. Photosynthesis was awarded for Game Strategy, so that was something we wanted to really examine when we played. But more on that later.

Blue Orange Games is a game maker that specializes in visually beautiful games, the kind I’ve only realized existed for a short time.

A couple of years ago, we had the chance to sit down at Barnes and Noble and test drive a bunch of board games there. Up until then, most of our family’s board game knowledge came from whatever was available in the board game department of Target and Wal-Mart. In our world, there were two types of tabletop games: the super mainstream all ages-rated Monopoly/Scrabble variety and the extra smarty-pants kind you need at least four hours and possibly a DM for. Game night at B&N opened our little basic minds up to the incredible range of games out there–our favorites were the darling Kitty Paw and Onitama, both of which my kids were all capable of handling at the ages of 6 and 9.

After that, I was on the alert for new games to add to our collection. My in-laws bought us Get Adler, and I picked up Machi Koro from Facebook marketplace. Playing these types of games is a fun way for the five of us to spend time together, and it teaches my kids critical thinking skills like strategy and deduction.

With a collective eagerness to add a new game to our library, we settled in to play Photosynthesis. I like to have the whole family participate in our game reviews because we have such a wide range of ages, abilities, interests, and perspectives.

The floor of Arthur and Lucy’s bedroom is the perfect surface for gameplay. They share the best possible tween kids’ bedroom ever, an attic loft wherein their beds are tucked away to either side under the sloped roof leaving a wide open space in the middle for watching TV, playing, and whatever else.

Arthur volunteered to help set up the game, but when he opened it, it seemed immediately very intimidating with page after page of game pieces to be punched out. Thankfully, the cardboard was thick and durable, not flimsy and prone to tearing as we’ve experienced with many other board games. 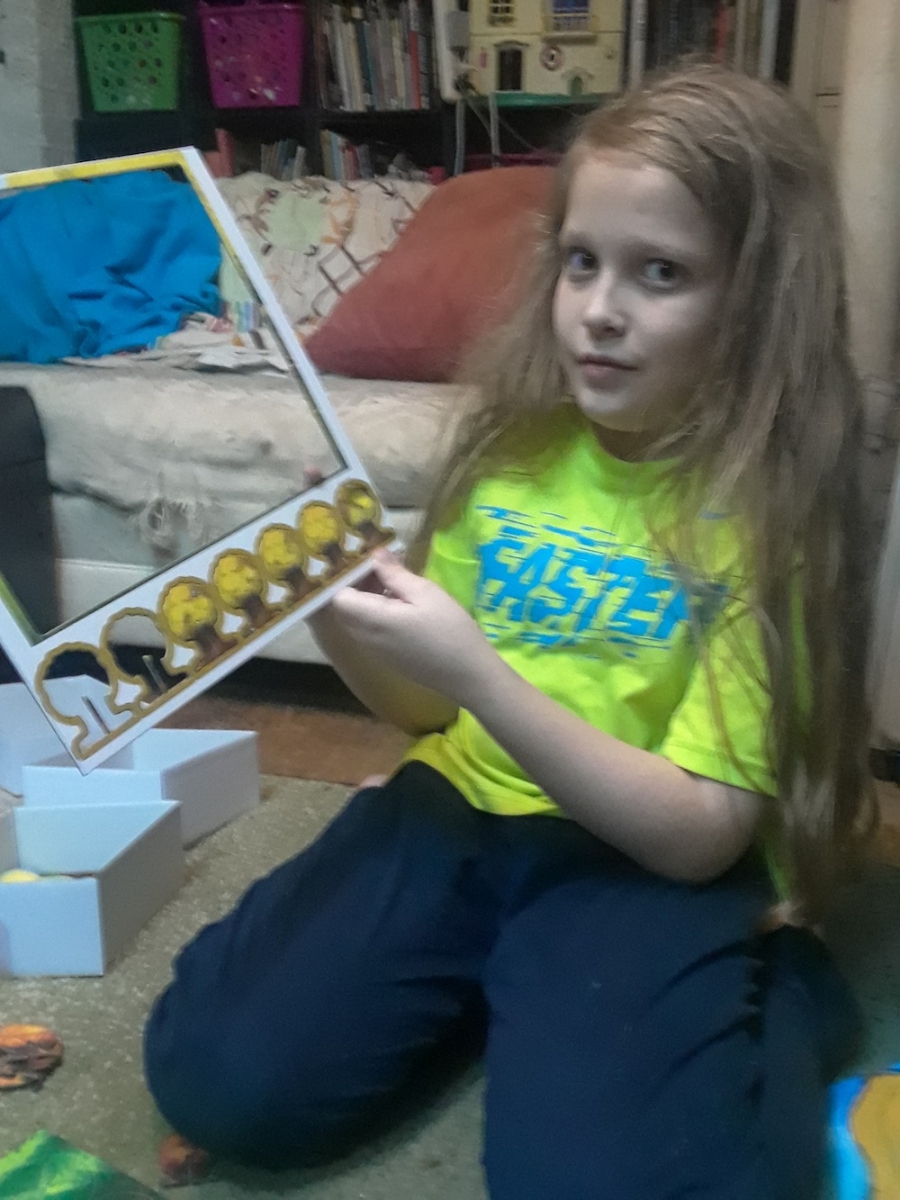 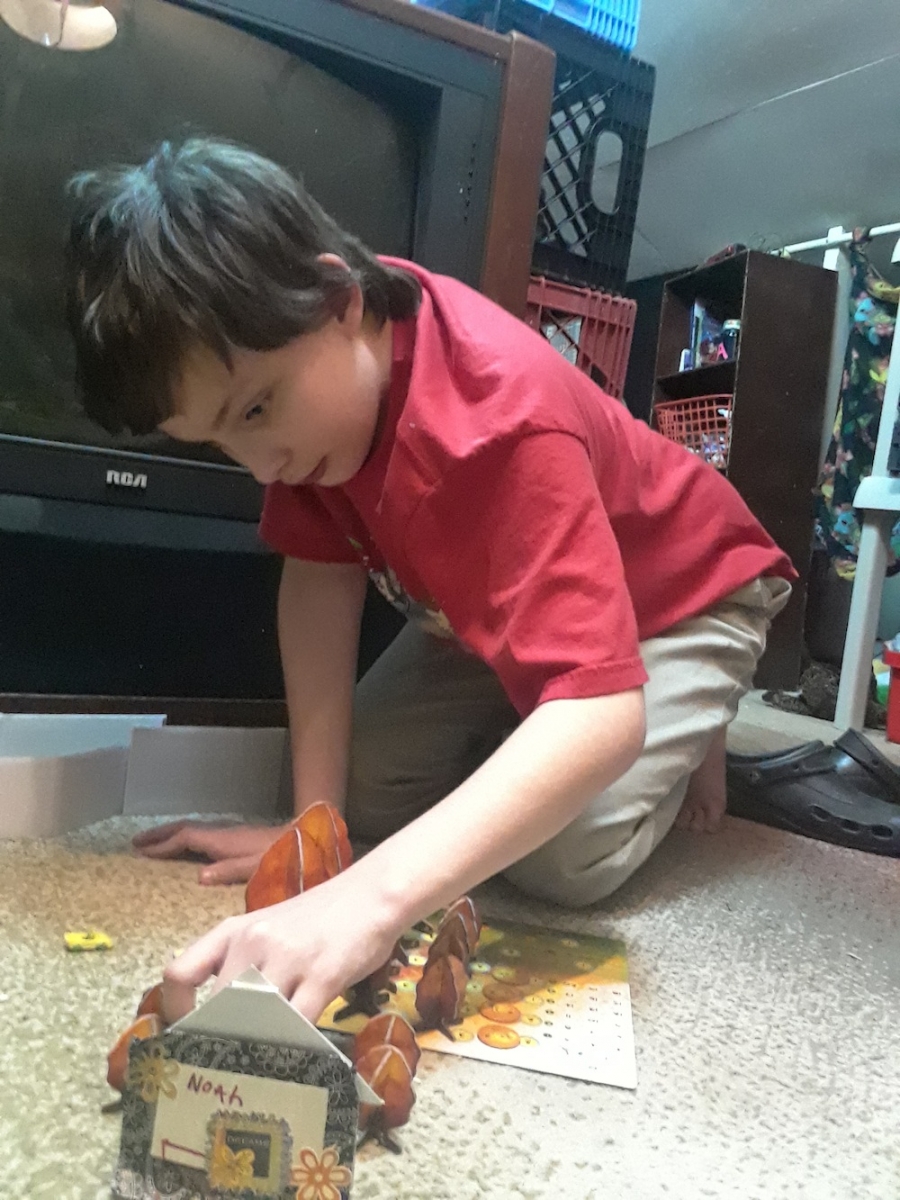 It took us a solid 20 minutes to punch out all of the pieces and do the preliminary setup. I say preliminary because even after we thought we’d set everything up, it turns out we hadn’t actually done the game setup required at the beginning of every game.

We found this process to be extremely frustrating and possibly could have been a deterrent to continuing for someone else, but we soldiered on in part because the game was so visually beautiful. The lush greenery of the box and stunning game pieces and boards were all created by artist Sabrina Miramon, whose dreamy art has been featured on several other tabletop games.

We finally made it to the fun part, putting together all of the lovely three-dimensional trees used in gameplay. The other kids decided to join in, and before long, it was time to play.

The game is meant for two to four players, which means that two of us have to play as a team. That’s not really a big deal under most circumstances since Lucy is still pretty young and likes to play with me, but Justin solved the problem by sitting out to observe and help in case the game was more complicated than we expected (I’m looking at you, Machi Koro). 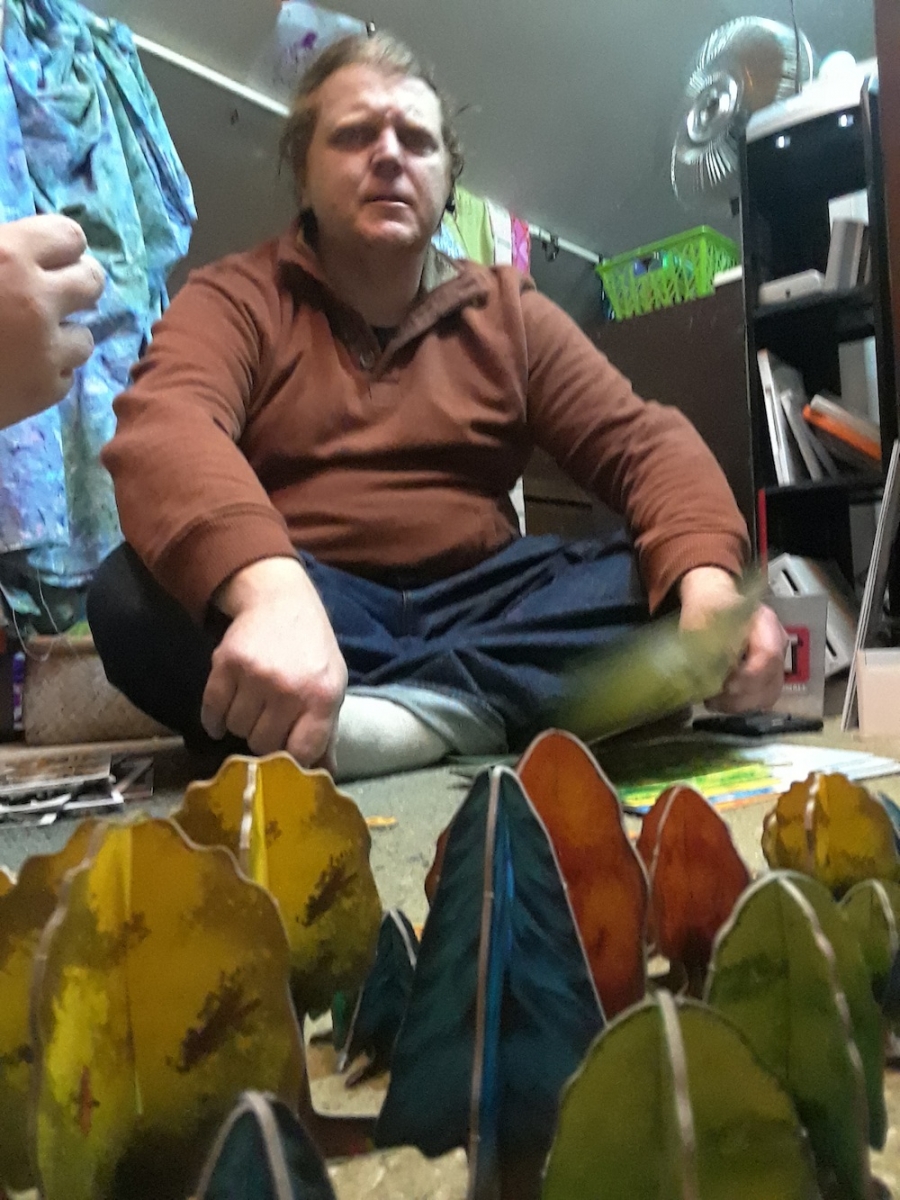 Before I go further, I should mention that the game is rated for ages eight and up, with Lucy just under that. She has been playing chess a few years with her brothers, which is to say that she takes to games pretty quickly, but I do think the game falls at the higher end of eight-year-old ability.

Justin walked us through setting up our little boards–each person gets a different season and type of tree and seed–and then two turns around the board of us passing a token and setting up trees. I can’t overemphasize that this took a surprisingly long time to accomplish.

“And now we’re ready to begin the game,” he told us. 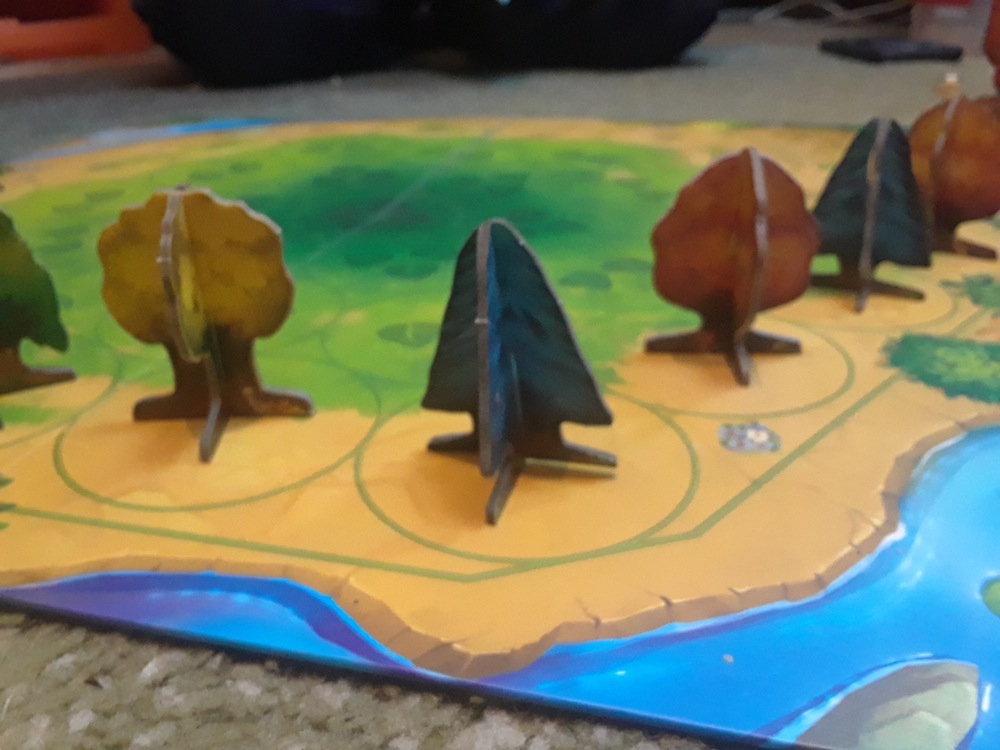 There are two types of people, those who read the instructions all the way through and are sure to thoroughly understand them before playing and those who read as they go and just sort of wing it. Justin is the former, while I am the latter. The instructions for Photosynthesis are heckin’ long and without the context of gameplay, they seem pretty abstract and complicated when read aloud. After a few minutes, Noah had begun creating a little microworld out of his trees and Lucy had a healthy side conversation going with a murder of Littlest Pet Shop characters. Justin made it about halfway through reading them before I threw a mini tantrum and suggested we just begin.

One thing that the game makers did very well was to include exceptionally clear pictures of just about every activity in the game on the instructions. Everything Justin had read to us in the instructions that hadn’t made sense was absolutely crystal clear with the instructions. As both a visual and linguistic learner, I found this to be super helpful.

Each player gets a player board where they keep their trees and seeds and keep track of their points. The board has a sun segment, a crescent-shaped lemon slice of sunshine that sits at the corners of the hexagon-shaped outline on the board and is moved around the board clockwise with each player’s turn. 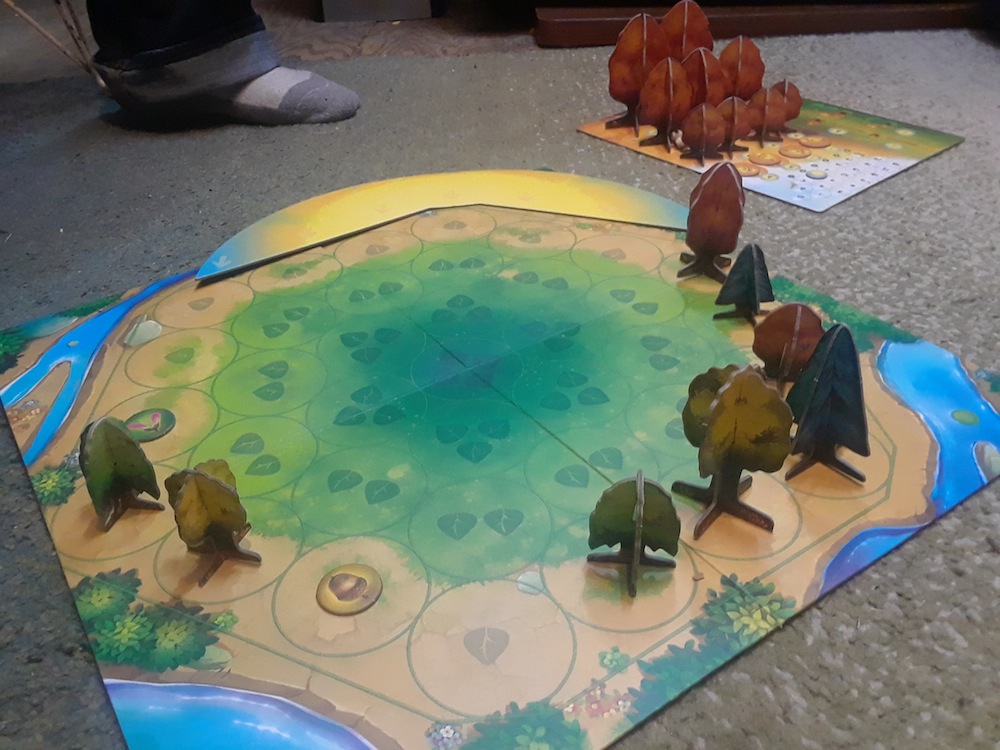 At the beginning of your turn, you move the sun slice thingy. Each player will have trees already on the board thanks to that annoyingly long game setup. You are supposed to imagine that the sun’s rays are hitting your trees. If your tree is in the shade behind another tree, it can’t get any sun. Depending on the tree’s size, it will cast a shadow on the trees behind it for one or two spaces.

If this seems complicated, the instructions have a very helpful image to show exactly what is in the path of the sun and what each tree’s shadow is like. 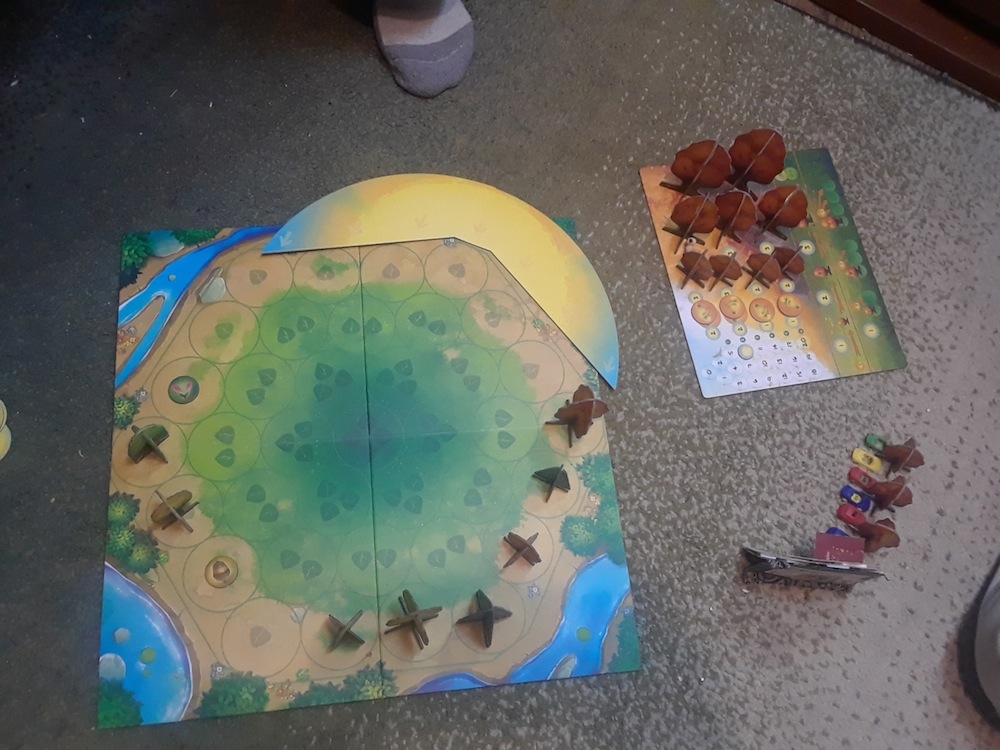 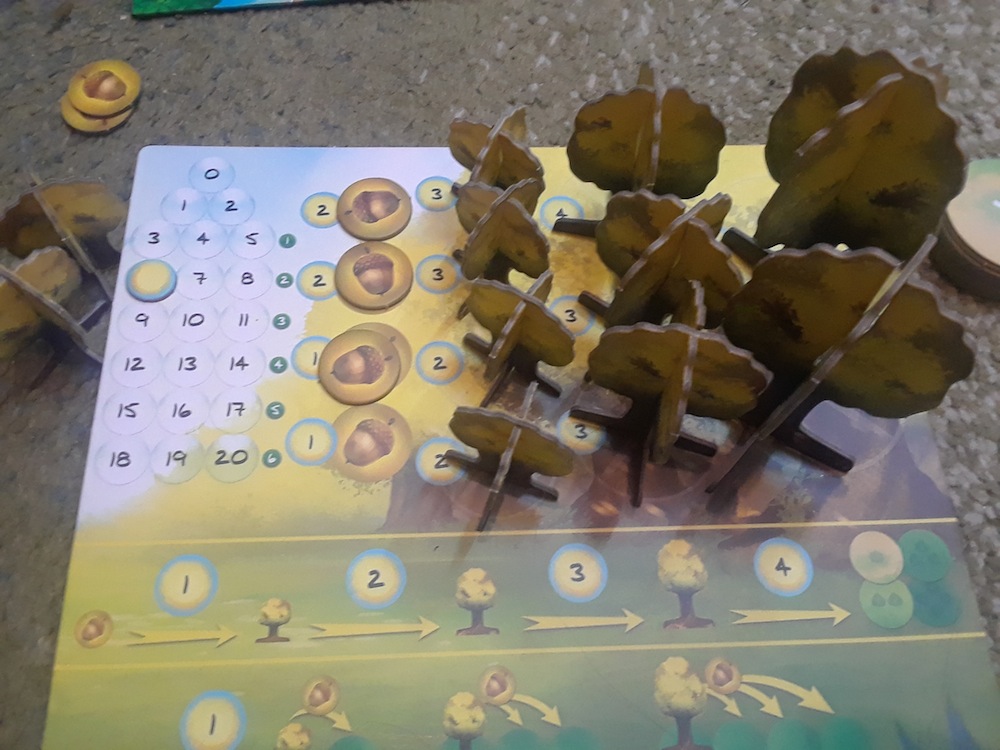 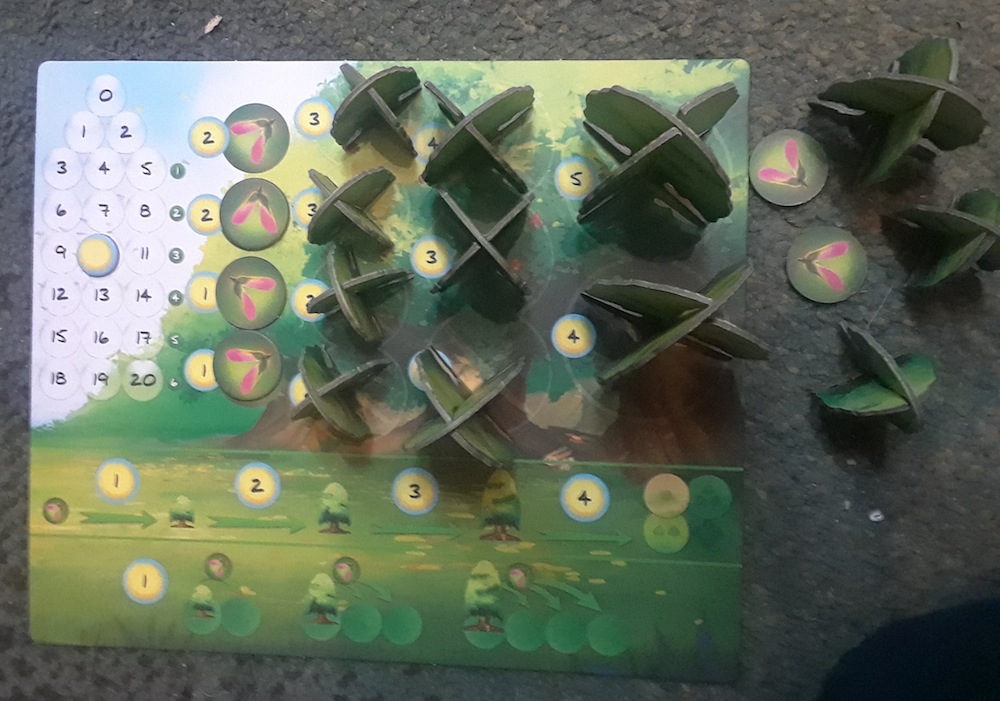 Once everyone has counted their light points, the player whose turn it is can use their light points to buy seeds or trees or upgrade their existing seeds and trees on the board. There are lots of tricky rules on this–for example, you have to plant at least two spaces away from a medium tree and three from a large tree. You can also end the life cycle of your large trees and collect points for them.

The game lasts for three revolutions of the sun around the board, also known as the Photosynthesis Phase. At the end of the game, everyone counts up their points to determine the winner. 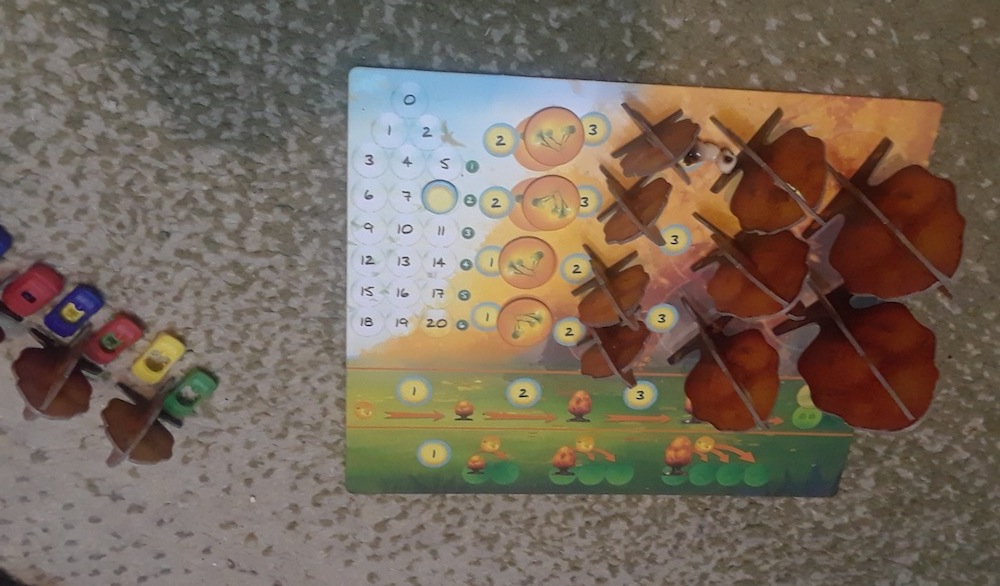 Once you’ve played the game a few times and understand the point system and rules, you can step up the Advanced Variation of the game, which includes four revolutions of the sun around the board and slightly more restrictive rules about seed planting. The game time is meant to be about 45 minutes to one hour, but I would expect to end up on the longer end of that time unless it’s just between two adults who have played a few times.

Would I buy or recommend this game? Absolutely. The fact that it does require a little bit of extra energy to learn to play and set up is because it is such a complex and interesting game. It’s an active play game; there’s no zoning out and playing an empty move. You have to really think about what you’re doing, and that’s what makes it fun.

If you’re looking for a fun tabletop game to add to your collection, definitely give it a go. Now that you’ve had my recommendation, what games have you been up to lately? Is there anything you’d like us to review next? Leave me your recommendations in the comments and I’ll be sure to check them out. 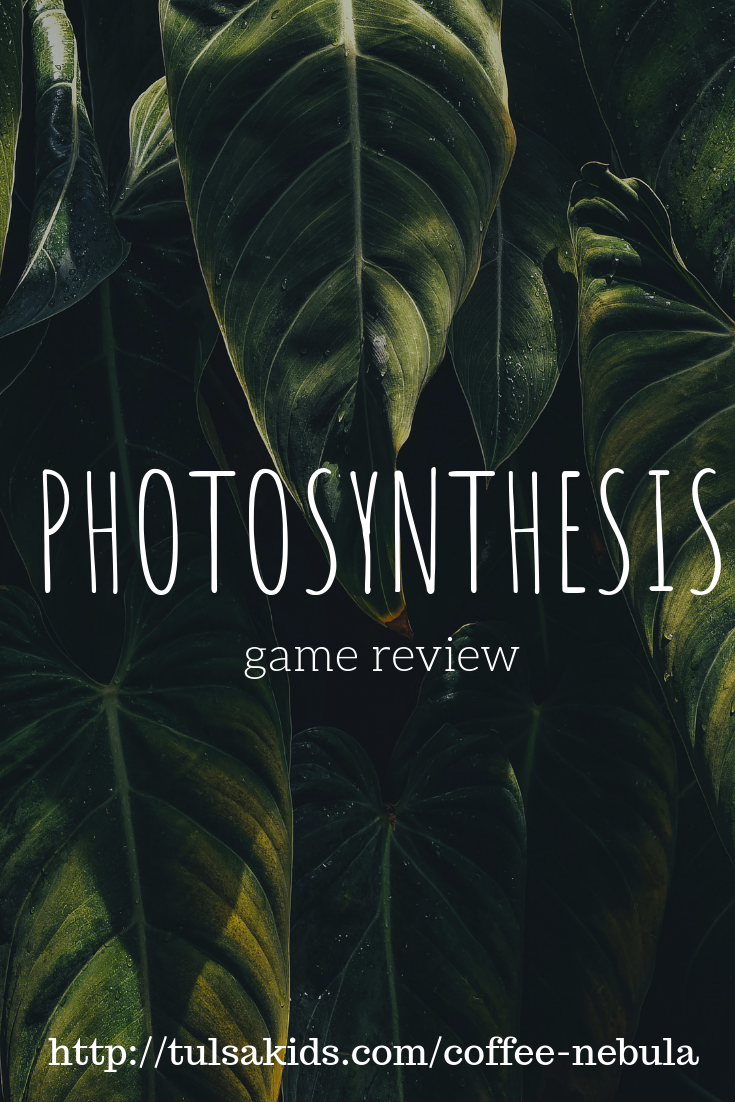