Maybe your kids are flawless, raising them was bliss and you’re the perfect parent: in that case, quit reading and tune in next week. Last week as I was browsing the library shelves, the title of a book piqued my interest, If I had a Parenting Do Over: 7 Vital Changes by Jonathon McKee. This isn’t a book review because the book itself wasn’t noteworthy, but the idea started my brain churning: what if I could have a parenting do over, what would I do differently if I could do it all over again?

I’d like to say I gave parenting 100% but I’m going to be honest and admit there were times I phoned it in; mornings I gave my kids a cold pop tart in the car instead of waking up in time to cook breakfast, tuck-in times when I cheated and skipped a few pages of the bedtime book and nights I let them skip a bath because I was too tired to go through the routine. I’m going to give myself an 85%, not perfect but a “good enough” solid grade of B. I did a lot of things right, but if I’m real with myself, there are things I could have done better. Although there would probably be some common themes, I would guess there would also be a lot of variation on parenting do-over ideas.  Let’s spend a minute in an alternate universe and talk about parenting do-overs; I’ll tell you mine if you’ll tell me yours. Stealing the idea from the book, here are my seven do-overs.

1. I wish I’d spaced them a little further apart.

My oldest daughter was 15 months old when my youngest daughter was born; think about the math involved. This means I got pregnant, on purpose, when the oldest was only six months old!  I’m not sure why I was in such a hurry but my body, sleep, marriage, sanity and therefore my kids, suffered for it.  Most doctors recommend a two year wait between pregnancies to allow a woman’s body to recover, and studies show a decrease in SIDS death among infants when pregnancies are spaced at least one year apart. I wasn’t aware of these facts when I decided to have my kids so close together, I was only thinking how fun it would be for them to grow up together.

According to the book, the most common regret parents have is not spending enough time with their children. Maybe because I had them so close or because I became a single mother when they were only one and two, or maybe it’s just my personality type that I tend to be either all-in or all-out, but I feel like I let myself be so completely absorbed in being a mother that I almost forgot who I was. Diane slowly faded, taken over almost fully by the role of mother. It was only after they left for college that I began to reclaim parts of what made me who I am. I was so busy trying to make up for my kids having divorced parents that I let go of my own hobbies and interests out of guilt and sometimes, out of pure exhaustion.

3. I wish I could have lived in the moment more often.

I tend to spend too much time dwelling on the past and dreaming about the future when I should enjoy the present. But my question remains the same even years after my kids are grown and I’ve fully recovered from the sleep deprivation years: how do you live in the moment when you are emotionally drained and physically exhausted from the stress of raising young kids? I hate to keep playing the “single mom card,” but there is no denying that raising kids, especially during the toddler years, by yourself is not easy.

This sounds more about making my life easier rather than a parenting issue, but the two are integrally related. I wanted to be everything to everybody, I wanted to prove I was strong and didn’t need help. But the reality is our life would have been easier if I’d occasionally asked for some help.

I thought I did a good job when they left home for college. My youngest skipped a year of high school so they left home together, and I went from two kids at home to zero overnight. I felt I adjusted well after the first semester, but then came summer and the return of two college kids, not the same high school girls who left my home nine months previously. I reverted back to strict rules that were completely inappropriate for college kids used to their independence. In my mind they were still my babies, but the reality is they had been on their own, doing whatever they wanted for nine months, and my expectations were unrealistic. You can’t put toothpaste back into the tube.

6. I wish I hadn’t been so strict about some trivial issues, especially as they became older.

I sometimes lost sight of the big picture and said no when I could have said yes. Don’t win the battle just to lose the war. As a very wise child development specialist once said, if it doesn’t hurt anyone, if it isn’t a moral issue and if it won’t matter in ten years–say yes.

I spent most of my daughters’ lives trying to lose weight and despairing over an extra ten or fifteen pounds. I had confidence in many aspects of myself, but the constant worry about not being the perfect size seeped out and influenced my daughters’ views of healthy self-esteem. Children relate most to their same-sex parent, and I should have been a better role model for positive body image.

If I were Superman I could fly in the opposite direction of the earth’s rotation and rewind time to make all my “I wishes” come true and undo my parenting regrets. But even if I were granted parenting do-overs, I’m almost certain I would create new mistakes, maybe different ones, but I’m positive no one emerges from 18 years of parenting with no false steps or bad decisions. I’ve wasted more than a few precious hours of sleep ruminating over mothering missteps. If we let ourselves, we could be eaten up with regret over things we wish we had done differently as parents. I’ve made apologies to my kids for my mistakes, they forgave me and we moved on. Parenting is hard work, it’s not a sprint but a marathon with hidden potholes along the journey.  You’re not going to be perfect, but make sure they know you love them, you’re proud of them and you like them (yes, like is different than love). You’d have to check with my kids, but I’m almost certain I accomplished the most important goal; they know without a doubt they are loved unconditionally forever and always. I guess I’ll pass on the do-overs after all. 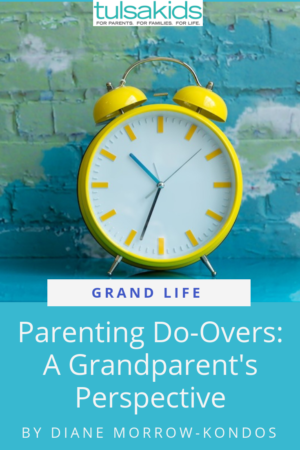