A review of 'Not Parent Approved,' a card game for tweens (or nostalgic adults)

Ah, game nights. The perfect, low-key kind of party for introverts thanks to guaranteed built-in conversation 🙂 I’ve written about some of my favorite card games before, but it had been quite a while since I’d hosted an actual game night with friends. So when someone reached out asking if I’d like to review a game that was recently featured in our article, “Shopping for Teens: Gifts Beyond Gift Cards or Cash”, I figured that would make an excellent excuse to host a winter break game night!

I invited a few friends, spent a day cleaning the house (a key reason I try to host periodic get-togethers!), baked some cookies (these are my favorte go-to party cookies, when sandwiched with Greek yogurt), bought frozen pizza and voila! Easy game night. While most of the card games I buy can be played with as few as two players, “Not Parent Approved” requires at least four, so thankfully three other people showed up for the games portion of the evening. I’d warned them that we needed to play “Not Parent Approved,” a game intended for kids ages 8+, for at least long enough to get a good feel for the game–and you can probably guess that this will be a mostly positive review by the fact that we ended up playing it the entire time.

“Not Parent Approved” is a “Cards Against Humanity” or “Apples to Apples”-style game, without the raunchiness. The worst it gets is booger jokes and fart humor, and some of the cards reference parents or teachers in a way that can be less-than respectful, but nobody in our group was too bothered. Actually, we decided it was probably best for tweens and adults…skipping over the later teen years…as who doesn’t love a chance to reminisce about high school, summer camp, frenemies, etc.? 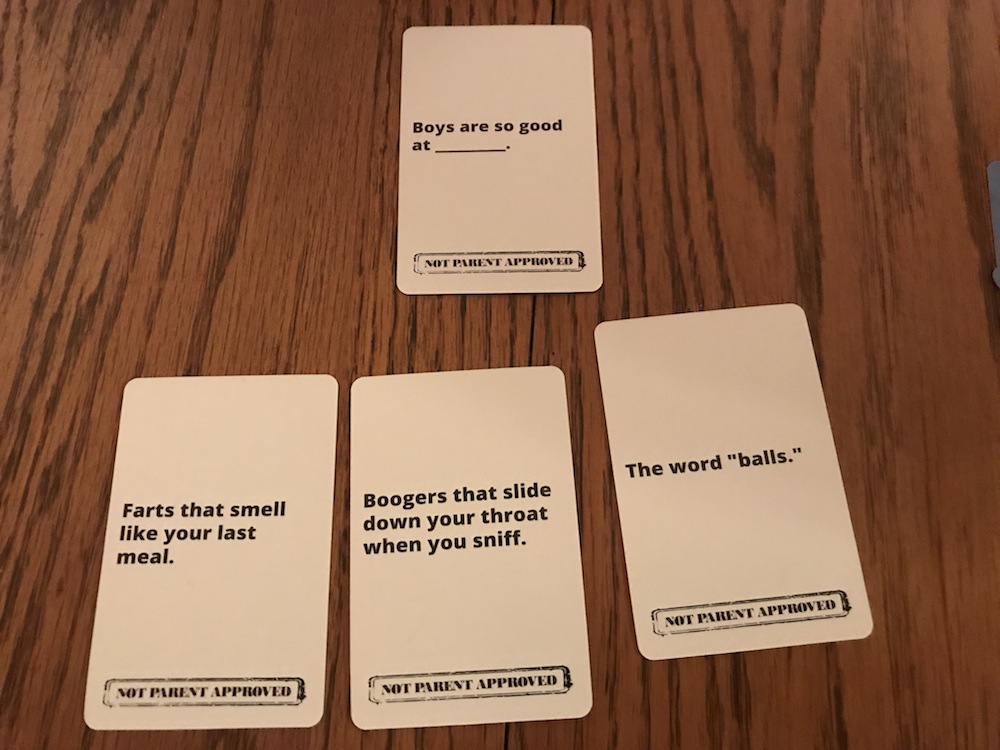 At the end of the night, the general consensus was that “Not Parent Approved,” both despite of and because of its more juvenile, harmless sense of humor, was actually more fun than “Cards Against Humanity.” The only slightly annoying thing was that the answer cards either featured simple nouns or gerund phrases (thank you, Christi, for that information!)–for example, “giving yourself a haircut,” as seen below. Which meant that only about half your seven answer card choices might make grammatical sense with each clue card, so sometimes your options felt a little restricted. 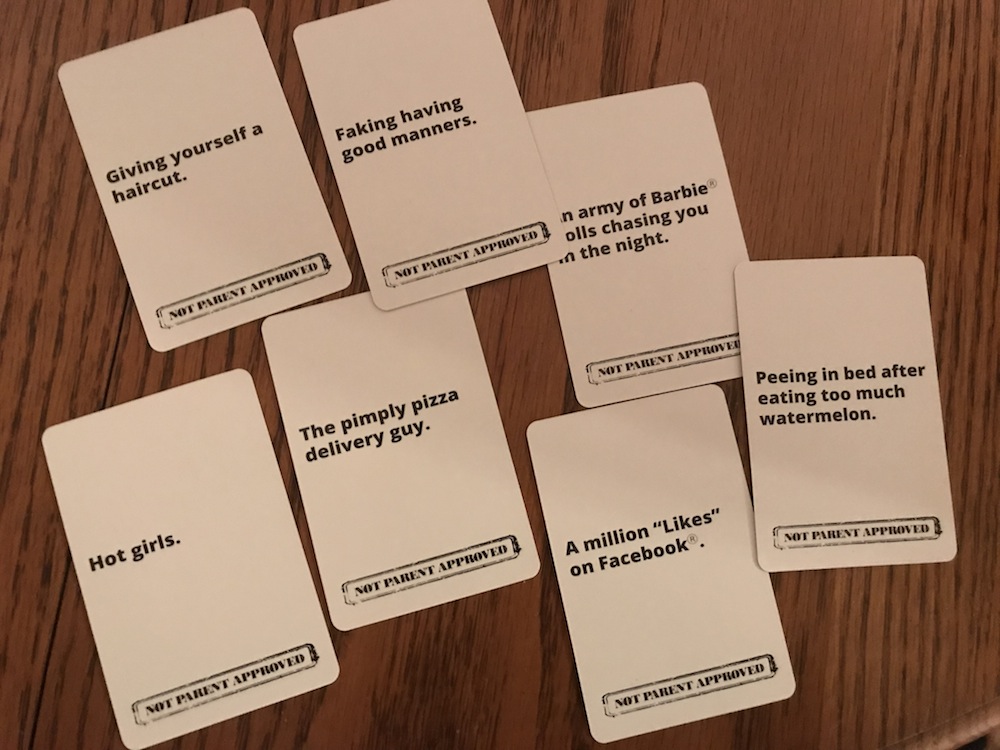 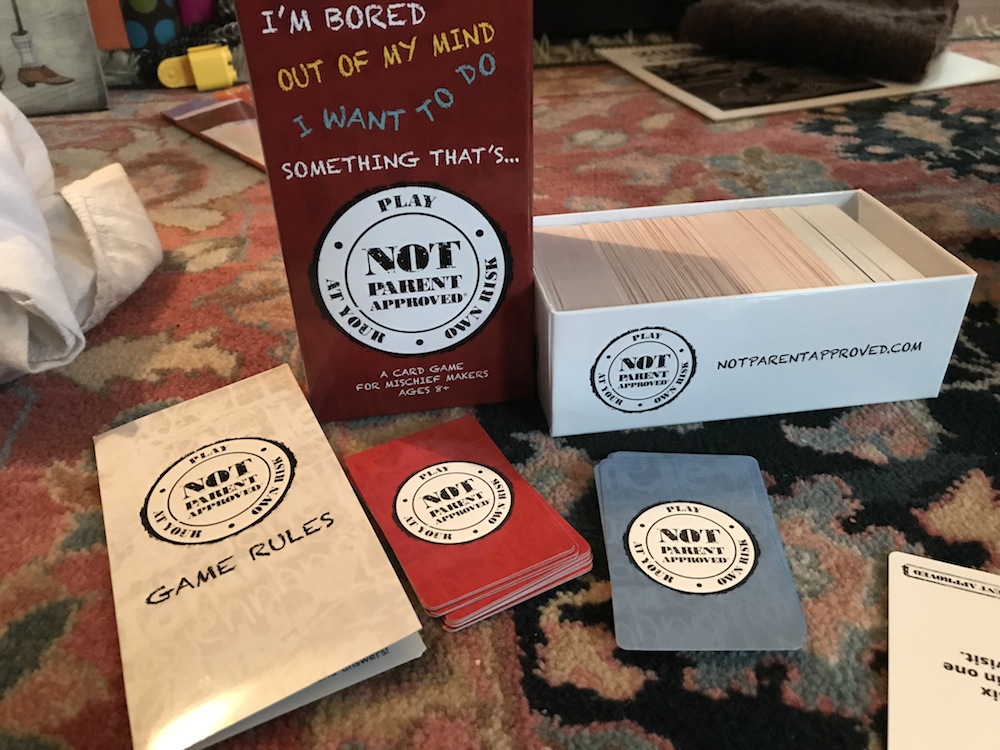 But all in all, “Not Parent Approved” was easy to learn, fun to play and a great way to spend a game night, even for adults. It received a Seal of Approval from the National Parenting Center for 2018 and was also a NAPPA Award winner in 2016.

As you can see from the photo above, even Joss enjoys this game 🙂 In our version, he decides whether he wants to choose a blue or a red card, asks, “What does this say?” and cracks up when I read it. Then he chooses the opposite-colored card, and I read both cards together. He often rolls on the floor giggling, saying, “That is SO SILLY!” or “That doesn’t even make any sense!” whether or not he understands what has just been read aloud.

Before closing, I wanted to share about a couple games we got Joss for Christmas, if you’re looking for some fun (and adorable) games for younger kids. We ended up at Barnes & Noble in Wichita on Black Friday evening, and they were having a buy one get one sale on games, so I chose two that looked fun to get Joss for Christmas: Tea Party by eeboo and Dream Cakes! by Ravensburger. 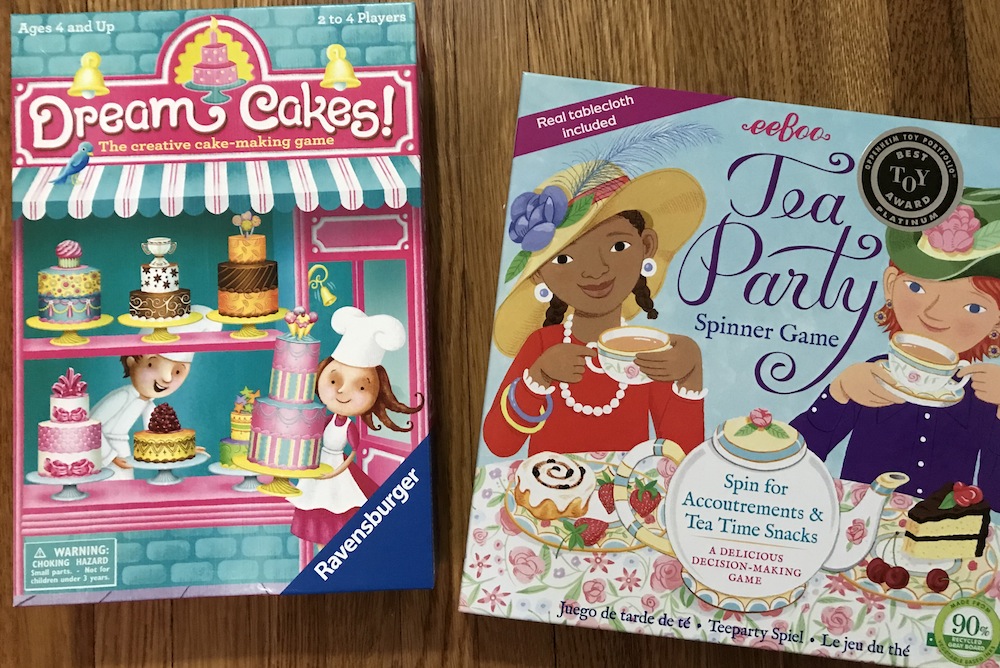 Since baking, tea parties and cakes are some of our/my favorite things, I was excited to play these with Joss. Tea Party is the perfect game for very young kids, as all you do is spin the dial until you’ve collected all the elements of your tea party. Very simple. for 2-4 players. 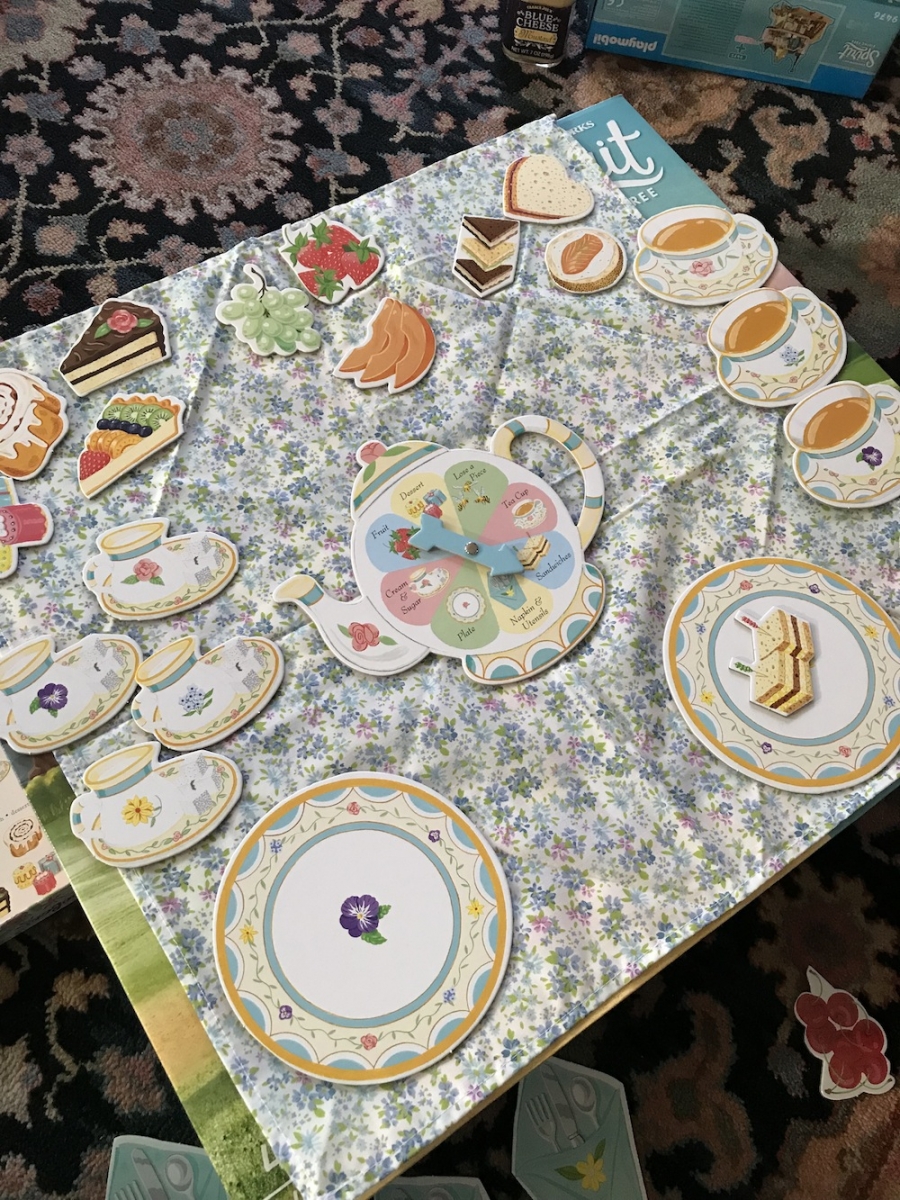 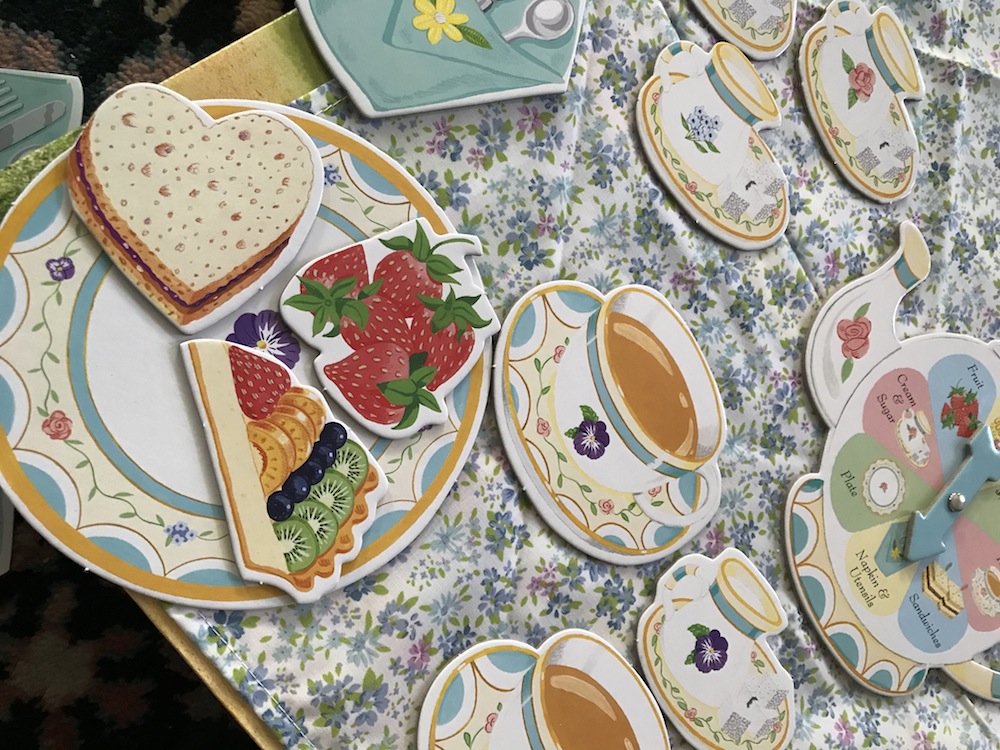 Dream Cakes! is slightly more complex, as you can build multiple cakes at one time; all the cakes you build have to have a cake stand, large tier, frosting and a topper, but you can also do multiple large tiers, add smaller tiers, etc.–the larger/more complex your cake, the more points you get for it. But you also want to finish cakes because if you don’t, there’s a spot on the spinner marked “Big Spill”–if someone lands on that, all the unfinished cakes are ruined! (But it’s a very small spot on the spinner, so we haven’t landed on it very much.) 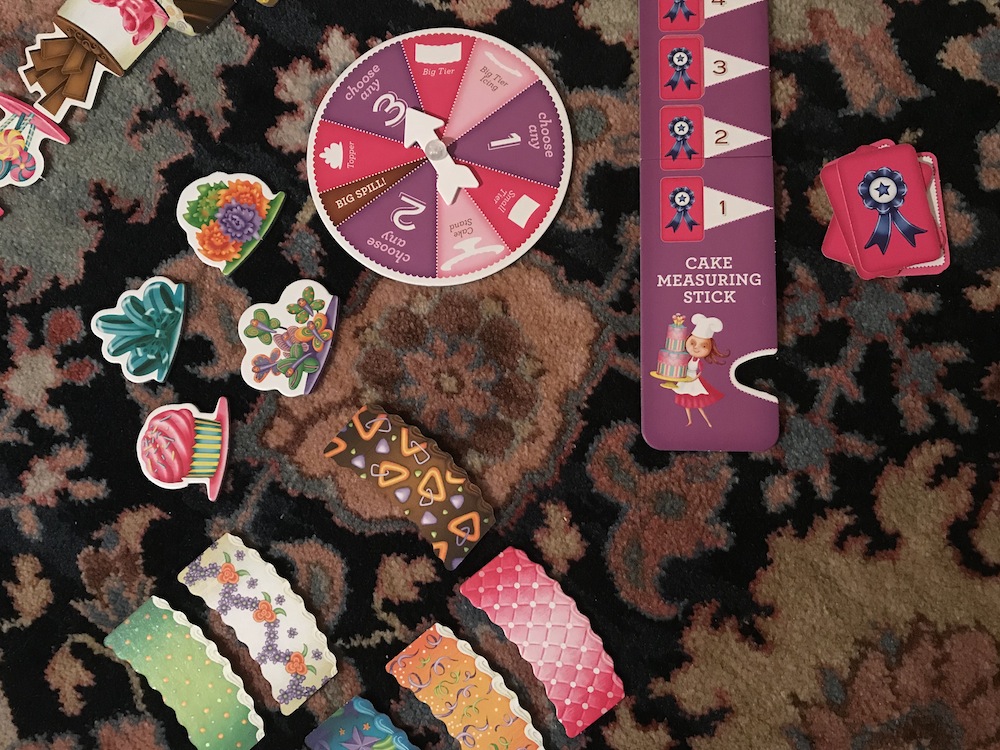 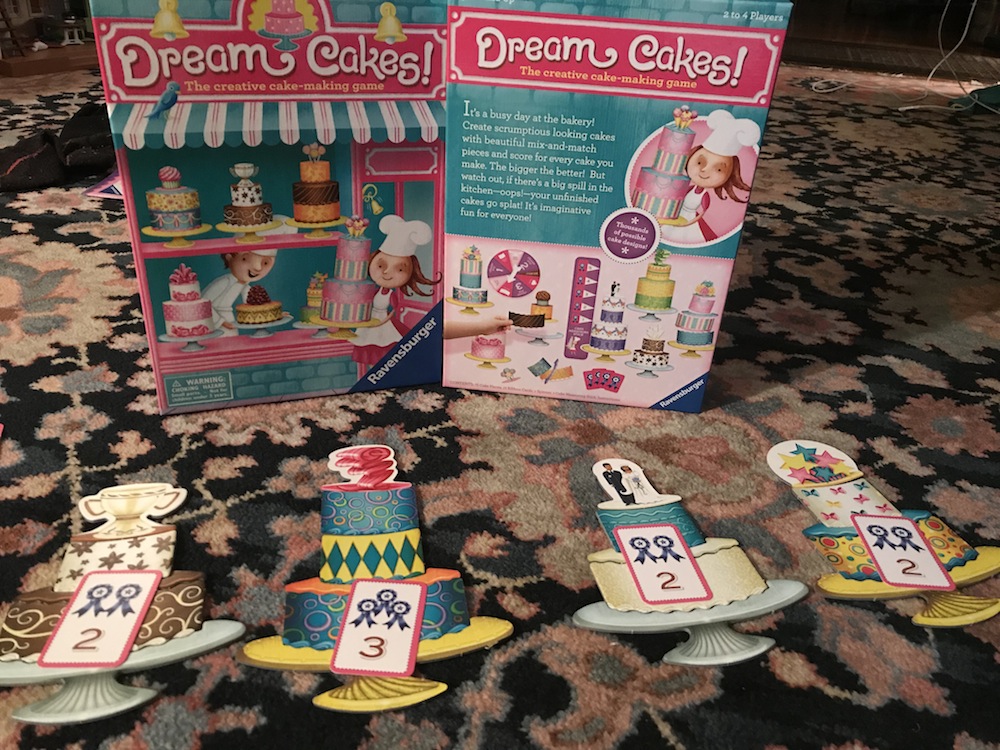 Dream Cakes! is fun because you can build so many different cakes; each piece is two-sided, meaning there are even more options than pieces. Joss has built a Yoda cake using green pieces, a Luke Skywalker cake using chocolate pieces, and a “diaper tank” cake (he gets this from a Star Wars: Bad Lip Reading video) using a combination of blue and white pieces, haha. Mostly, we just ditch the spinner altogether and build cakes willy-nilly.

Did your kids get any new games for Christmas? What have you been enjoying playing lately? Let us know by leaving a comment! 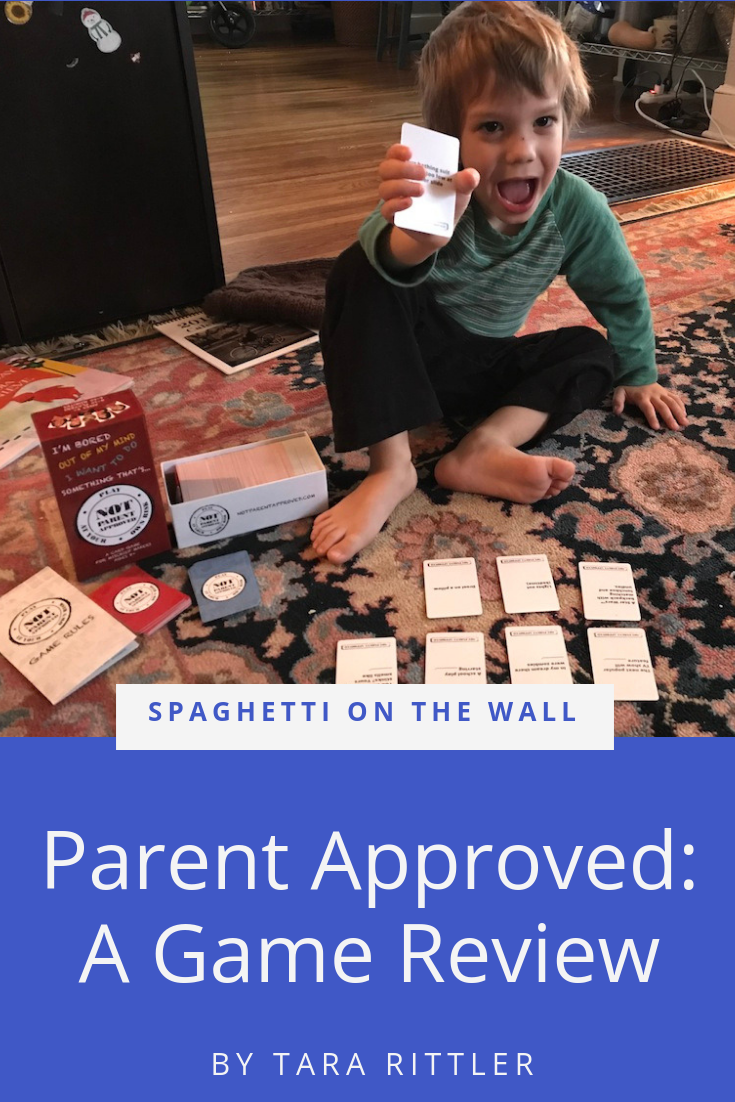