What your child is and isn't learning in the classroom. 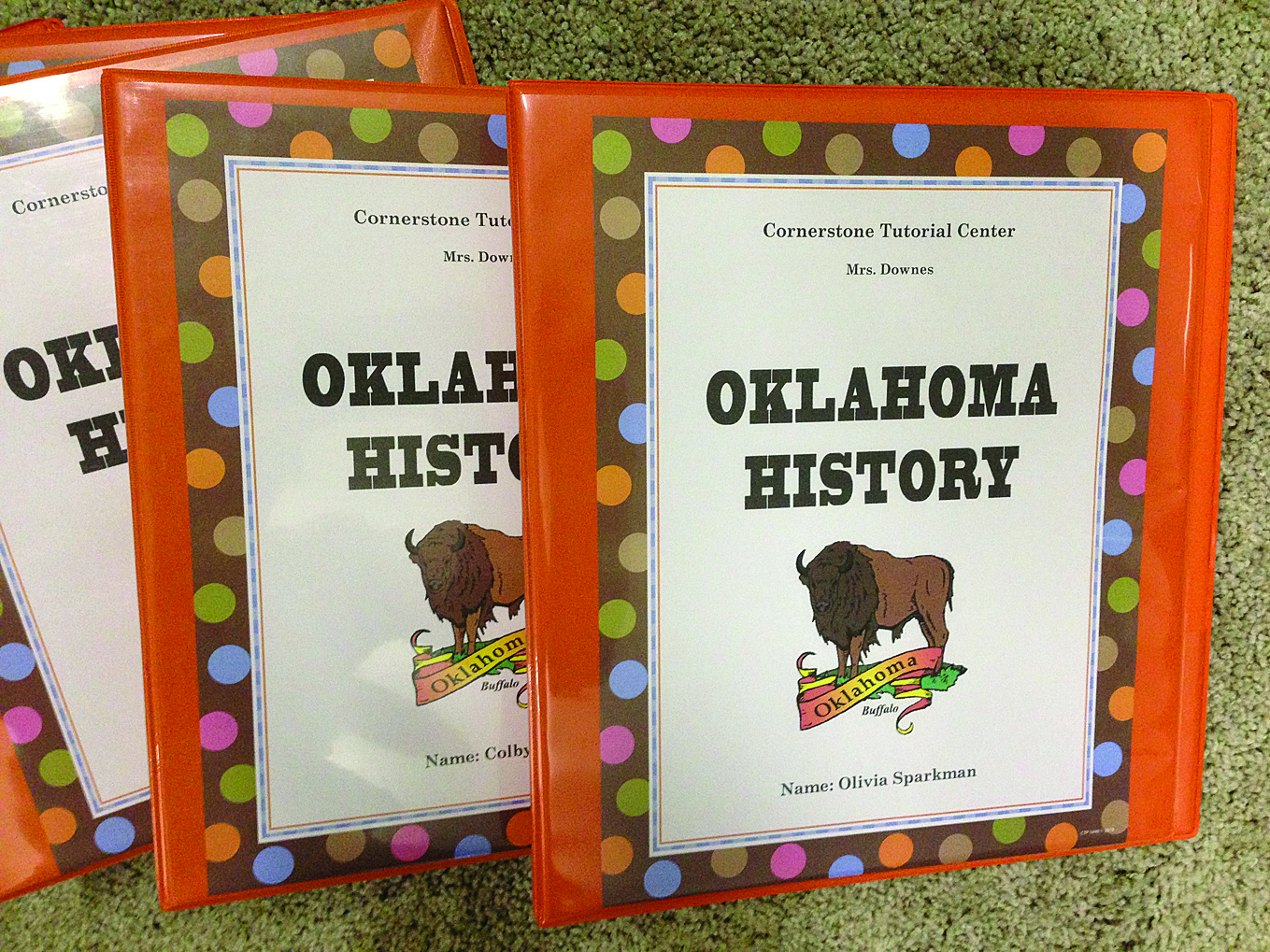 Every spring third grade students from many elementary schools throughout the state reenact the Oklahoma Land Run. Boys and girls clad in cowboy hats and prairie bonnets, some pulling red wagons transformed into Conestoga Wagons, scramble to claim a plot of playground for their future “homestead” in somewhat the same way approximately 50,000 people lined up for their piece of Oklahoma land back in 1889. For the third graders, the Land Run reenactment is an exciting outdoor event that culminates a year of classroom studies on Oklahoma history, but many schools have eliminated the activity because of its slanted view on the past. So what do Oklahoma students learn about their state, and why does it matter?

The Oklahoma State Department of Education outlines what is to be taught in Social Studies during a student’s journey through Oklahoma public schools.

Shan Glandon, executive director of Teaching and Learning at Jenks Public Schools, said third grade is the formal year in elementary school for the study of Oklahoma and its history. Third graders learn to locate Oklahoma cities and towns as well as major landforms, waterways and vegetation. They study Native American history and heritage, the role of the cowboy and bison in early Oklahoma, the Dust Bowl and what can prevent another Dust Bowl, the Kerr-McClellan Navigation system, the discovery of oil as well as farming/ranching, aviation and other industries that impacted the state’s development.

“The third grade unit is organized into three areas of study and students spend time interpreting historical documents, working in teams to research and prepare presentations and writing about their learning,” Glandon said.

Native American Heritage and culture is predominant throughout the third grade curriculum. Specifically, students learn about the western Oklahoma Native American tribes settling in Oklahoma between 1500 and 1700, Indian removal, the Trail of Tears, the Land Run and statehood.

In 2014, Oklahoma City Public School officials announced that OKC schools would no longer hold Land Run reenactments because the event does not tell the whole story behind the 1889 rush to acquire unassigned lands that were once held communally by tribes. The district has worked closely with Native American families to create a lesson plan that teaches Oklahoma history from several different perspectives.

Tulsa mom Joanna Shadlow faced the Land Run dilemma last year. Shadlow’s family is Osage. “Our school holds the reenactment of the Land Run in kindergarten, and our daughter really wanted to wear her pink cowboy boots. We contemplated having her wear her Native American regalia or a shawl and stand as the other students ran by to ‘claim’ their land. This is what some schools do that have a larger percentage of Native students.”

Instead, Shadlow’s husband went to the school the day prior to the Land Run reenactment and spent time with their daughter’s class telling stories about Oklahoma Native American culture and why the land was important to the Native American tribal communities.

“So I guess we tried to educate our children and other students about Native culture while also letting her wear those lovely pink cowboy boots and participate with her peers,” Shadlow said.

Homeschool parent Cindy Downes has found the best way to enhance her children’s experience when studying Oklahoma history is to utilize all their senses.

“In addition to reading a textbook about Oklahoma, I have them read historical fiction books set in Oklahoma,” Downes said. “The historical fiction will get them interested in learning more about Oklahoma’s unique history. We visit historical sites and museums, walk Oklahoma trails, cook authentic Okie recipes, create a timeline of important events, build models and watch videos. I have my kids keep a notebook of places visited, books read, essays written, worksheets completed, maps created, and photos of all their activities. This notebook will not only provide a record of what they have learned, but it will also be a treasured memento of their adventures.”

The Oklahoma History Center in Oklahoma City sees approximately 30,000 elementary through high school students pass through its doors each year. The museum offers 50,000 topics and 2,000 artifacts reflecting Oklahoma’s past.  Outside on the museum’s grounds visitors can take a walking tour of the Red River Valley exhibit that features land forms, vegetation and important historical locations. The grounds also include an outdoor oilfield exhibit with drilling derricks, a portable derrick and machinery associated with Oklahoma oil explorations.

Director of Education Jason Harris said the museum strives to create a connection between a student’s life and history.

“We want them to understand that they are part of a story that is much larger than they know and that their contribution to it, no matter how small, is important,” Harris said. “Sometimes what we do is very simple and sometimes quite large. For example, we have a working chuck wagon that we use both at the museum and in schools across the state. By using the wagon, we can provide background knowledge, show how life may have been and what activities would occur, and allow students to compare and contrast their lives to others before them.”

The museum’s website offers interactive student pages with information on topics such as Native Americans, the state’s African American Civil Rights Movement and the USS Oklahoman.

Oklahoma is currently one of a few states to still require that high school students take a class in the state’s history. Many state education departments, such as Missouri and Kansas, now advise their school districts to teach state government during a general government or political science class. Oklahoma students are required to take a one-semester class (1/2 credit) of state history.

Booker T. Washington High School history teacher Jeffery Mosburg said that his students are not just learning the rote facts or trivia points about the state’s history. Instead, Mosburg intertwines a mix of sociology, anthropology and local culture into his class, hoping his students learn to look at history with a broad perspective.

“Oklahoma history is significant on so many levels, and it is impressive how tied in our history is to our national history,” Mosburg said. “In Oklahoma history a student has a chance to really grasp our Native American history and cultures.  That history is so central to our state’s history and may not be addressed in other history classes. Our state’s history exposes students on a localized level to a vastly different concept of a way of life. This is especially important today when we are looking at a vastly different concept of family structure than in the past.”

For example, Oklahoma’s Wichita tribe, said Mosburg, was a matriarchal society. “The maternal uncle played the male adult figure. The husband and wife lived with the bride’s family. This was not a traditional family structure for the time.  Today’s family structures are in the spotlight with gay marriage and single parent households and blended families. Students begin to realize the correlation between past and present.”

Students in Mosburg’s class also learn about property and common property. Tribes, he said, acted as one entity and owned everything together, much like a corporation operates today.

“You have these local but unique things that students have not put into perspective. I find that once they delve into state history, they realize there are common trends that are very well represented in American History and World History,” he said.

Mosburg incorporates the Tulsa Race Riot and the bombing of the Alfred P. Murrah Federal Building in downtown Oklahoma City into his curriculum.  The OK Department of Education curriculum standards require schools to teach the Tulsa Race Riot in both Oklahoma and U.S. History classes, and it has been included in Oklahoma history books since 2009.

“Oklahoma history offers a number of unfortunate events that as Americans we should have been better at handling. Taking away land of the Indians and the Tulsa riot to name a few. In regards to the Tulsa Race Riot, most history books do not even mention what happened in Tulsa or the actual scale of the events,” he said. “The Oklahoma City bombing is important on so many levels because you are looking at the topic of terrorism and extremism. Very timely in today’s global world.”

​Mosburg always takes class time to spark his students’ curiosity through discussion of Tulsa’s Black Wall Street, the Greenwood Historical District and even the history of Washington High School. “I want my students to be curious about areas of Tulsa and know what historically their school stands for.”

As for advice on how to discover Oklahoma history with your family, Mosburg said take the time to stop at all the historical sites or markers when driving through the state. “If you really want to learn a state’s history, stop at those historical sites you usually drive past. You will be amazed at the little-known facts you will learn. Ask my kids; they know I can’t pass one up,” he laughed.