What did the ocean say to the sea?

Nothing. She just waved.

“Where are we going, Mom?” Lucy asked, her face a chaos of tangled curls and bright blue eyes.

“It’s a surprise,” I told her as the van pulled up the Oklahoma Aquarium.

Her gasp of realization was audible as we walked past the statue of reef sharks at the entrance. “We’re at…this place!!!”

I was excited as well…my last ocean adventure was Bioshock.

“Dress for a luau,” I had told her. “Like Lilo in Lilo and Stitch.” So she wore a long-sleeved snowflake dress and pink cat ears. “Meow,” she had replied. “I understand, meow.”

It had been a long time since I’d been in the aquarium…our friends Craig and Mary’s wedding. Arthur had been a preschooler in a funky rocker haircut and a late-1960s powder blue leisure suit I had found online. He’d spent the evening on Justin’s shoulders while Justin tossed out shade about how much he hated line dances.

Lucy had not yet existed.

The foyer-turned-banquet room glowed in dim blue and purple uplighting; round tables crammed into the center were half-filled with patrons in leis under cascading, decadent florals hanging from above.

On our left was a bar. Maybe I’ll drink something tropical, I thought. Festive. I wasn’t driving.

“Let’s see what all this is about,” I told Lu, grabbing her hand and veering right. In her other hand was a filthy Ennard plushie she would drag through every exhibit. “Oh look, it’s peach tea like your Mimo makes! Yum!” I said, grabbing a cup. Lucy blinked at me, unimpressed. My attempt to sell her on the tea had fallen flat.

The long hallway down the center of the main aquarium exhibit was lined with food stations and little tables. The first was filled with desserts–shot glasses filled with what appeared to be key lime pie, raspberry mousse, and something fruity that tasted pretty much like the other two by the time I got to it. And yes, I tried them all. Just like I tried a whole plate of the mediocre bread pudding. Party rules–calories don’t count.

I also tried four ibuprofen for the ensuing sugar crash that left me feeling borderline sick about two hours later.

Lucy wanted nothing to do with the dessert, but she ate her weight in Hawaiian sweet rolls, a family weakness.

“This bread was inspired by traditional Portuguese bread,” my phone told me. So much for truth in advertising.

The Hawaiian sweet rolls were about three feet away from Kālua pork–roasted pig–on both serving tables. I love meat, but my daughter, like her brother, is pescatarian as heck. I managed to redirect her twice from this, but my poor vision sabotaged me near the shark tunnel. “Mommy!!!” she squealed. There was the traditional roasted pig’s head, apple in mouth, now decapitated, staring forth at us. I appealed to her cultural sensitivity, explaining that the roasted pig was a traditional Hawaiian meal. What do you know? It worked unexpectedly well.

It was time to visit the fish. We stooped over one of the touching pools where children can interact with animals, but Lucy was afraid to touch the starfish. Another woman walked up. “See, it’s fine!” she said, touching the little ocean friend gently. Lucy was unconvinced, but she wanted to. She gazed down for ages into one little raised pool. The starfish extended its arm up out of the water as if waving. “Now how will you ever be a mermaid if you can’t take care of your fish friends?” I asked her. “Look, it wants to say hi.”

She leaned over, almost touching it, shuddered and jumped back. Then she did it again, this time placing her finger on the little arm quickly. “Boop,” she said quietly. Then louder, smiling, “Mom. I booped a starfish!!!”

She begged me to see the turtles, but I dragged her to the shark tunnel. The monitor to our left caught her attention, then the fake shark head that lights up to teach you about sharks’ electrical sensitivity. “Those aren’t the attractions,” I told her, ushering her along under the wavy lights which simulated the ocean floor. “Come here.”

I pulled her into the shark tunnel. “Oh wow!” she said. We walked past a few other visitors–one was a former volunteer, explaining to her male companion that the shark tunnel could function as a tornado shelter. In the bubble in the center of the two tunnel arms, we were alone. Sharks swam all around us. I foolishly tried to take a picture; it was too dark.

“Sit with me,” I told her. We crouched against the side together. “Someday, you might not be able to see me every day. I want you to look around you. Look at the lighting, the sharks. Remember this moment we had together. Lock it away in your memories for when you need it.”

“I love you so much,” she told me. “And I love those sharks that just want to lay down and rest.”

Through the exit tunnel, a shark swimming overhead felt strangely close, as if there was no water or glass between us and it was simply flying across over our heads. The shark did not seem to notice or care about us.

We scored an abandoned lei for Lucy on one of the tables and headed to the sea turtle exhibit, a bright space meant to look like a mini-golf version of an island resort. The sea turtle swam behind us, content in a world of fish and artificial ocean. “I love turtles!” Lucy told me. Lucy loves everything. She is like the anti-Arthur. 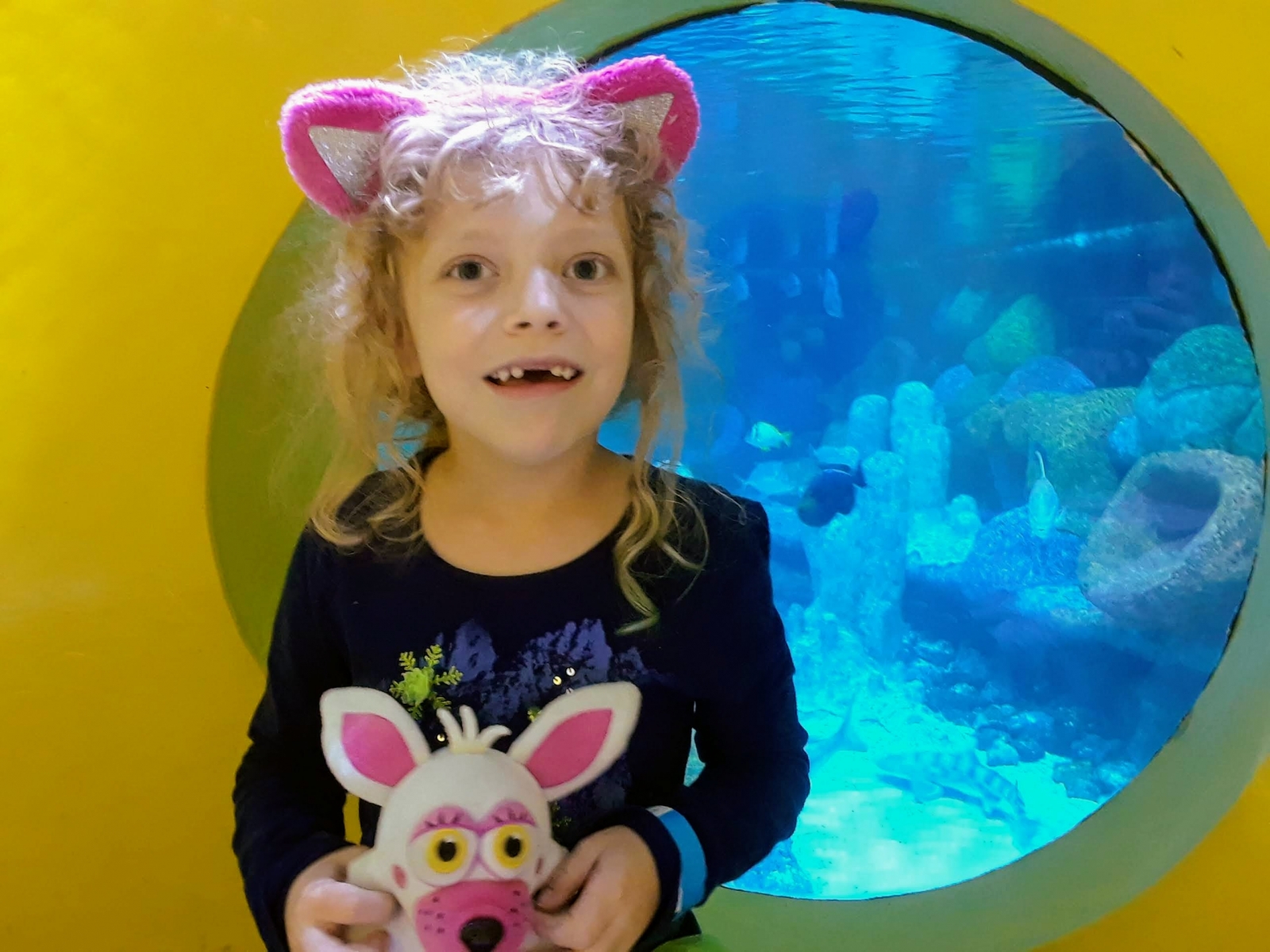 We tried and failed to take a picture that looked like we were on a tropical island. I could never get the hang of Instagram. I can use it, but I suck at it, a reminder that I’ll always be a Xennial who used to play hamburger mini golf on my Amiga computer, which means Facebook will always be my true home, awash in a sea of Baby Boomers, older Millenials, and the kids who use it to communicate with their parents. 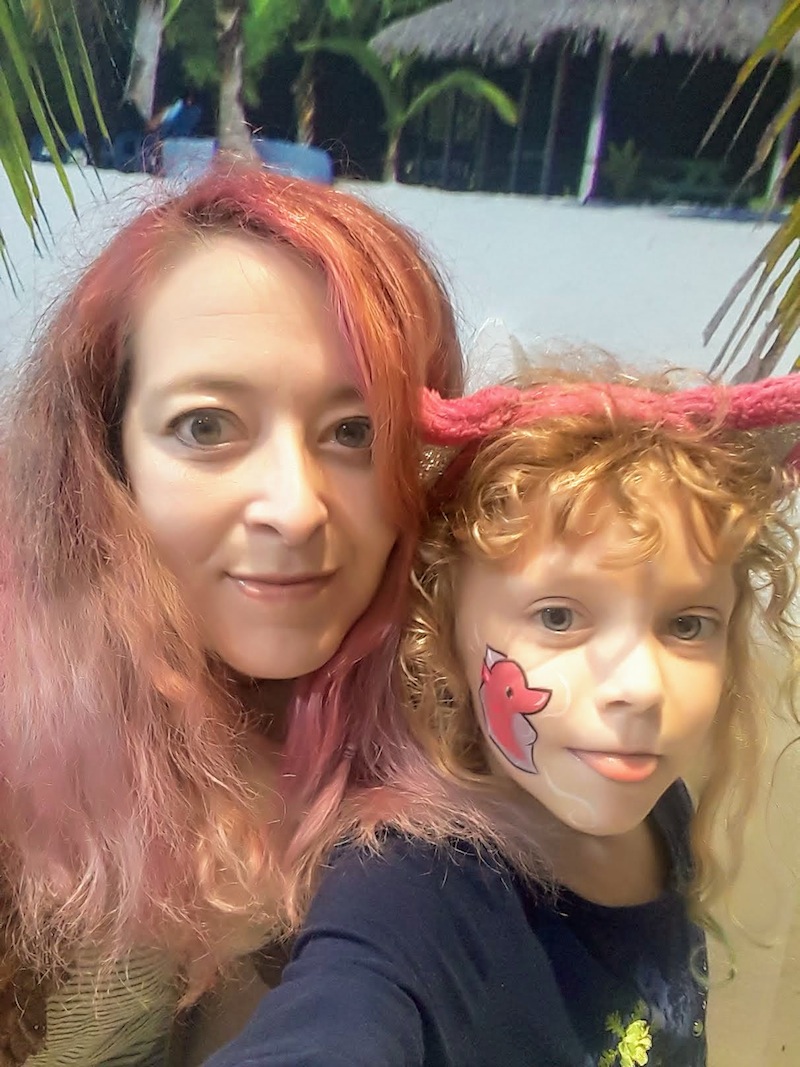 I wonder what that generation gap with Lucy will feel like when she’s older.

“We’re beautiful!” she declared, swiping through the hundred selfie attempts on my phone. “I’m so kawaii and you’re so pretty!”

She begged me to have her face painted. I had ten dollars Justin had given me to buy a cocktail. It was five plus tip for face painting.

I don’t really drink anymore anyway. It’s not a matter of principle. I’m just too tired to decide what I want. Sometimes I smirk thinking about how I used to worry I was a lush. No, I was a bon vivant. Now I am a bon nap.

She asked for a pink and purple seahorse, and I let her wear it until it was smeared off of her face. 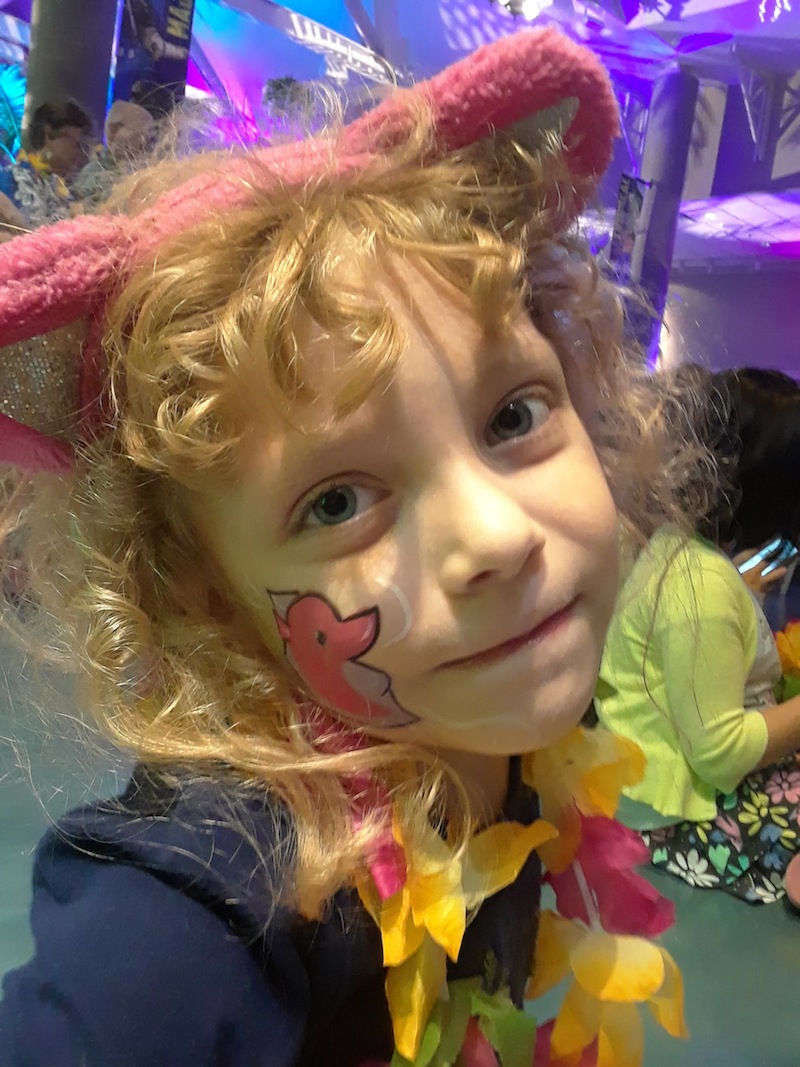 We finally made it to the Polynesian Reef, the exhibit this party was all about. It was beautiful, a rainbow of coral and anemones and tropical fish. At the zoo, I bring notepads and ask the kids to sketch what they see and write notes on the animals, but that’s not what tonight was about. 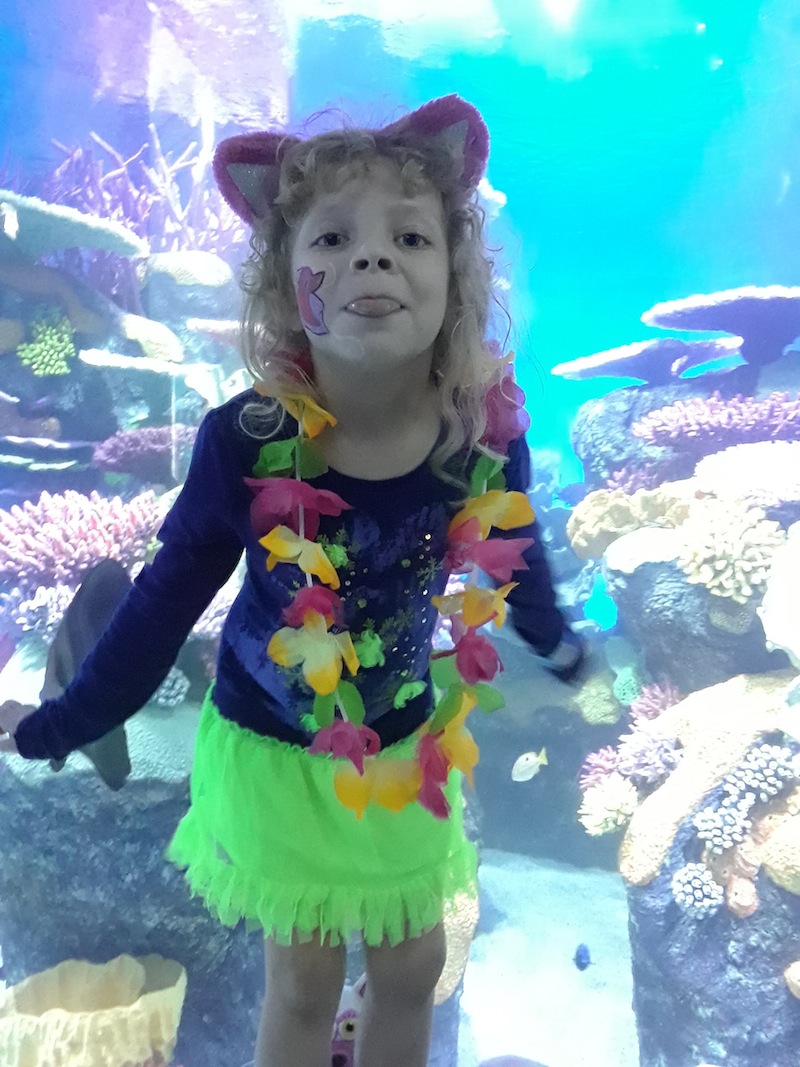 We sat for a while on the ledge looking at all the fish and chatting before going to visit the river fish and freshwater turtles. I miscalculated taking her to see the shrimp and crabs. “We eat these cute little guys?” she asked. I tried to explain that yes, we did, but usually they had happy lives unlike many of the land animals that are raised for meat. She wasn’t buying it, so only time will tell if she shuns fish and becomes our family’s first full-on vegetarian.

The food and dessert tables were sparse now, picked over like the end of a wedding. In the main party hall, Polynesian dancers were beginning their show, so we made our way to the side to watch. The best part of my night was watching Lucy transfixed on these women, their undulating motions like waves on water. She had never seen this kind of dance, and she was captivated. 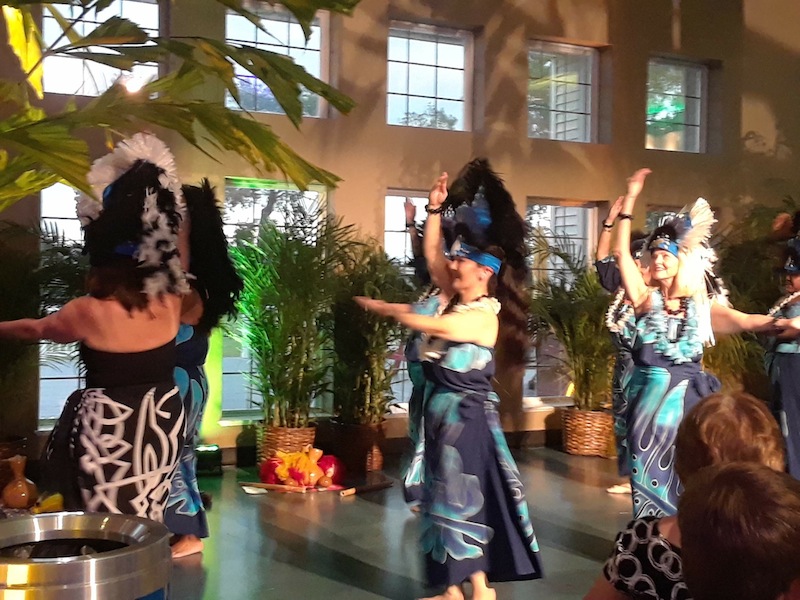 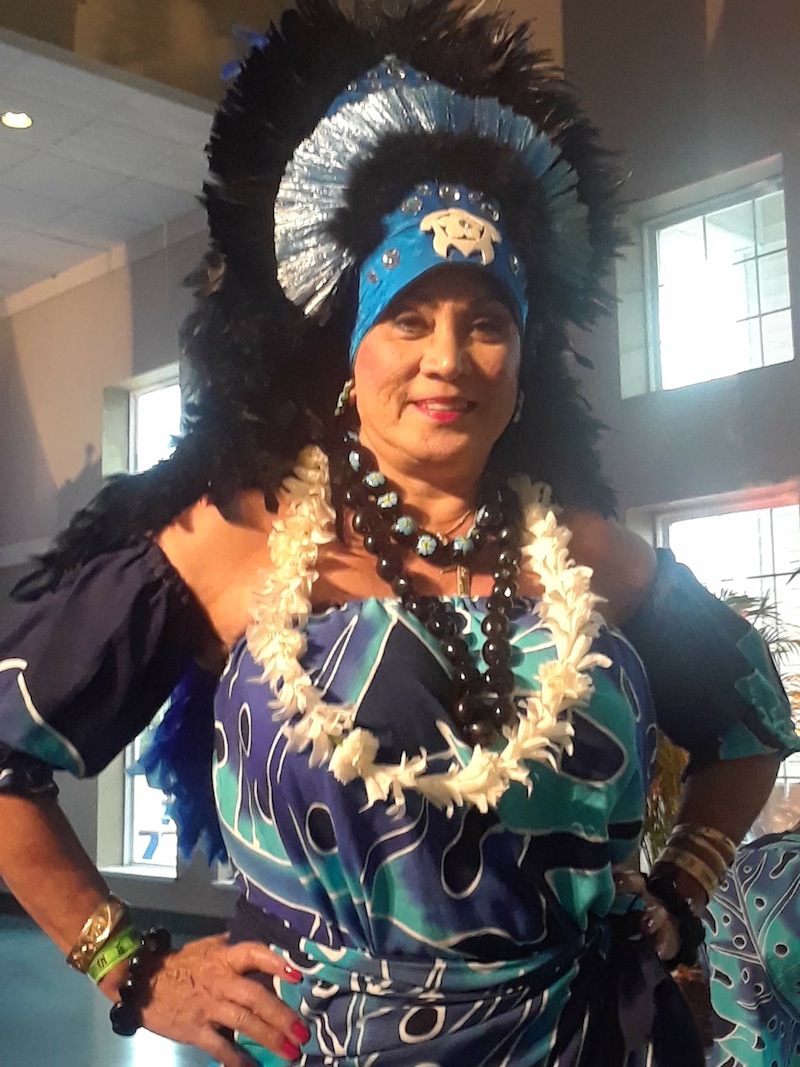 “Are you ready to call Dad to pick us up?” I asked as their show ended.

“Yes,” she told me. I texted him before uploading our pics to Facebook.

“Can I see?” she asked, then softly, “What if you post our picture and say ‘Mommy and Lucy best day ever best friends forever’?” And so I did. It got 99 likes. 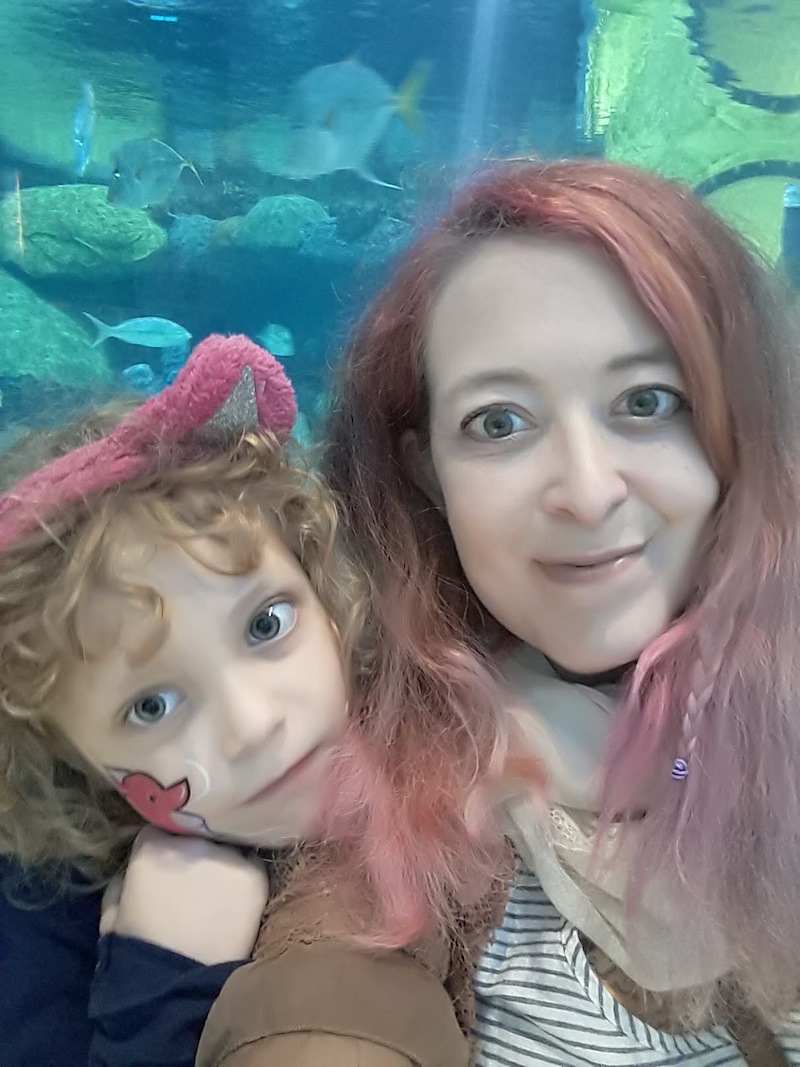 I don’t know how much we learned about ocean life on this visit, but we got to be together and appreciate the beauty of sea creatures, and hopefully Lucy will grow up to remember how special we felt in their presence and value them along with all other life on this planet. Maybe she’ll remember this night when her life is hard someday. I don’t have a lot of moments like this with my mom where I felt happy and safe, so I want her to have as many as she can.

Maybe whenever she sees tropical fish, she will always remember she is loved.

Share your aquarium story in the comments, and have a beautiful week.

About the Polynesian Reef Exhibit 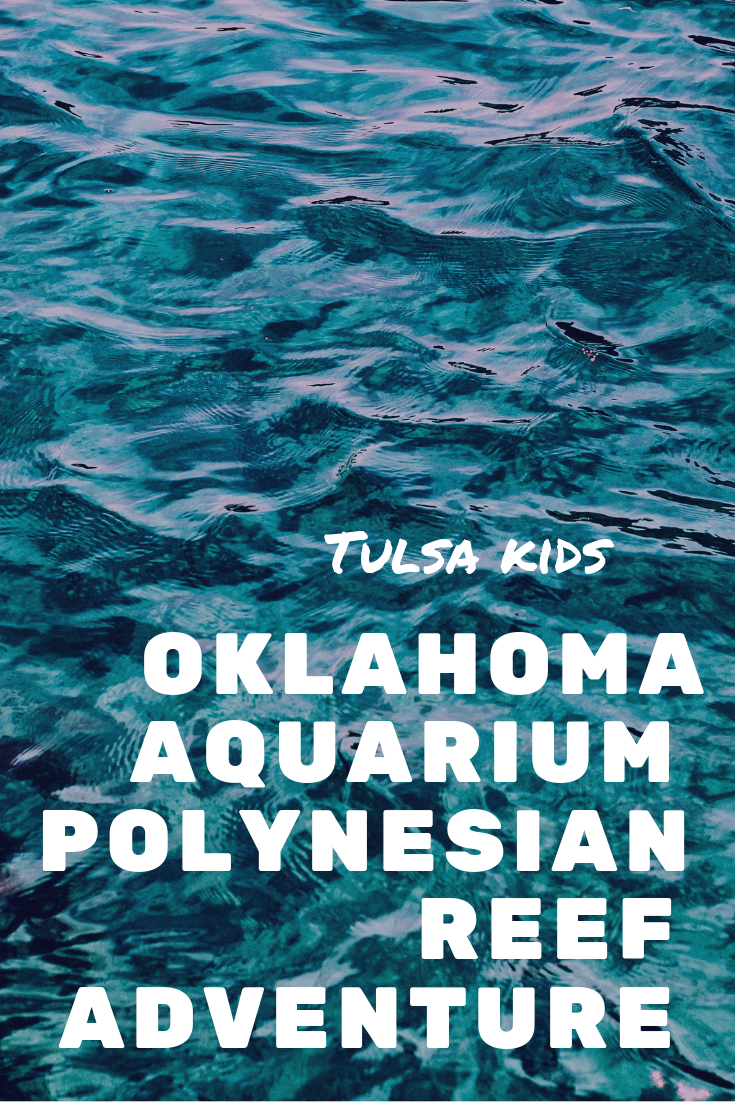