It started last week. I was dreaming of her.

She was frail and old, but not as tiny as she was at the end of everything. Her skin was not yet tissue paper thin, and her flesh still plumped up underneath it with a ruddy sheen, but her hair was short and dull, not the long, rich auburn I remembered.

I was sitting with her, either next to her or near to her, maybe in or near the bathtub, the spacial dysfunction of a dream state playing with the distance between us. “Come here, baby,” she told me, her words slurring slightly the way they did after her organs had been through the ringer from her many dialysis fasts. I was scanning her belongings, Avon earrings and books, artifacts of her life, feeling deeply connected to all of them, thinking I don’t want to let go of this.

I woke up sobbing, deep heaves of soul pain burning from my chest to my cheeks. I was lost in the grief, and in the moment, I realized I had never in three years cried for my mom. Somewhere between all the times I covered her up with her blankets and changed her diapers, I had been enveloped in a dreamy haze that never left me, and it had protected me from feeling anything but a dull numbness. Maybe that was better after losing my brother, the way that nearly wrecked me, shook me until everything fell away but the bare rawness of my pain.

I turned on Hulu last night and a new episode of Roseanne was on. There she was in the spirit of Roseanne with her brash, briny wit. Roseanne might be a strange bird with curious politics, but she knows how to write the working class. I remember the first time I saw that show…it resonated with all of us. It was the first time I had seen a family on a sitcom that looked in any way similar to my own. I enjoyed shows like Who’s the Boss and Full House, but those kinds of families always seemed sanitized to me. There was a sandpaper roughness to the Conners, but it didn’t mean they loved each other less. There was a complexity to the way they loved each other; it bore the callouses of countless traumas faced by working class people, not knowing how you are going to make it through another year, another month, with the lights on and food on the table or how you will manage when your aging relatives can’t live on their own anymore. That sarcasm is what gets you through. It is gallows humor, but if the jokes are good, there are worse places to be than on the dais with the people you love best waiting for the other shoe to drop.

My mom was the cruelest woman I have ever known. She connected with people deeply, but there was no room in her heart for forgiveness. It was a pattern with her: she would connect with someone profoundly, spend time with them constantly, then they would fall out and she would shut them out so fully that we would never see or heard from them again. It wasn’t just with friends; she did it with family, too. She did it with my aunt, her mother, my grandparents, and eventually, with me.

We were estranged for 12 years. We reconciled the year before Arthur was born, and it was like nothing ever happened for her. She never mentioned our estrangement; she doted on me, helped me with Arthur when he was born, took us on trips to Disney World. But she represented a lurking threat to the security and stability of my family, and I never lost sight of that. That she could turn on us at any time was never far from my mind. 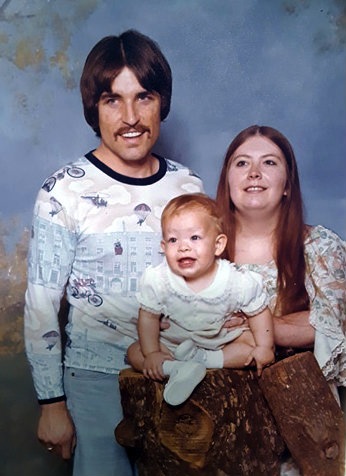 Examining the artifacts for clues to who she was.

I have never been able to wrap my head around how she got that way, but I searched the artifacts for clues. We are writing people. I have stacks of letters written by my grandmother to my estranged grandfather, I assume saved from after he died. They paint a picture of a strained, one-sided relationship, one that my grandmother and her daughters never fully moved on from. But there is much I don’t know. 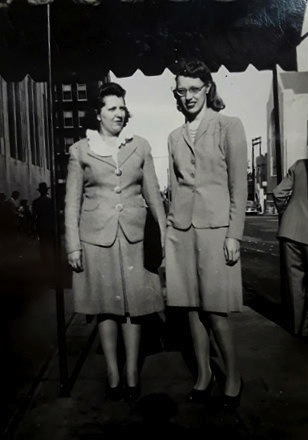 My grandmother on the left

What I do know is that somehow in that thicket of pain, my mother developed a wry, sardonic wit to rival Mark Twain’s. She was funny like a devil, and she felt everything intensely, powerful emotions like sound waves rolling off of her. I admired her handwriting, neat bubbles slanted to the left revealing her left-handedness. She taught me to write the same way she taught me to ride a motorcycle, with a cruel impatience. She used profanity with ease and flair, and she insulted like a surgeon, precisely and deep. She knew Latin, and she always thought it was the most useful thing I could ever learn. She was an extreme couponer back in the ’80s before there was even a term for it. She typed like 90 words a minute and could write in shorthand. She had a sharp intellect and no place to use it.

I see her in my mind, smoothing her hair with a flat brush, her waist-length hair the shade of a deep ambered wood grain down her back, mascara thick and black. She had to be just less than my age then, but she seemed older, her spirit stress-fractured beyond repair.

She was overweight most of my life, and she never got past it. Even after she lost weight in kidney failure, weighing in around 100 lbs, she would still buy her clothes in size 3x, which was truthfully too big for her even when she weighed 180.

I see myself in the back pews at church, the lights low and golden, holding her hand. She smells of Big Red gum as I lay my head against her arm. 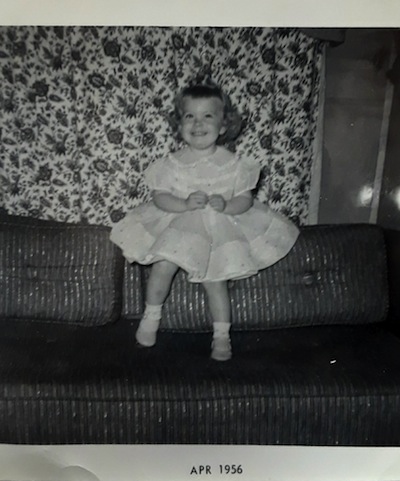 Growing up in the atomic age.

I see her eyes, gray like ice. Sometimes I think I am the only one who could really see her.

I know someone reading this is thinking that my dream was her sending me a message from beyond the grave. But I don’t subscribe to supernatural thinking.

People are complex, so much more than the sum of their parts and their pain.

I know what my dream really meant. It meant that I loved her when no one else could, and that never stopped.

Thanks for listening and have a beautiful week.