Some of you may recall that I wrote a post last year, in which I largely failed to be scared by ghostly children’s stories (with the exception of “The Night Gardener” by Jonathan Auxier!). Not that they weren’t enjoyable–and not that they wouldn’t be totally terrifying to their target audience, impressionable youth. It just depends on your kid and their tolerance for things that bite and lurk.

This year, because I get inordinately excited by Halloween despite the fact that I’m pretty intolerant of grown-up-level scares, I wanted to share with you more spooky reads for the season.

The first is The Raven Cycle by Maggie Stiefvater. I had wanted to read this series for at least a year before finally realizing I could get my hands on it via the Kindle app and a little help from the Tulsa City-County Library’s digital collection. 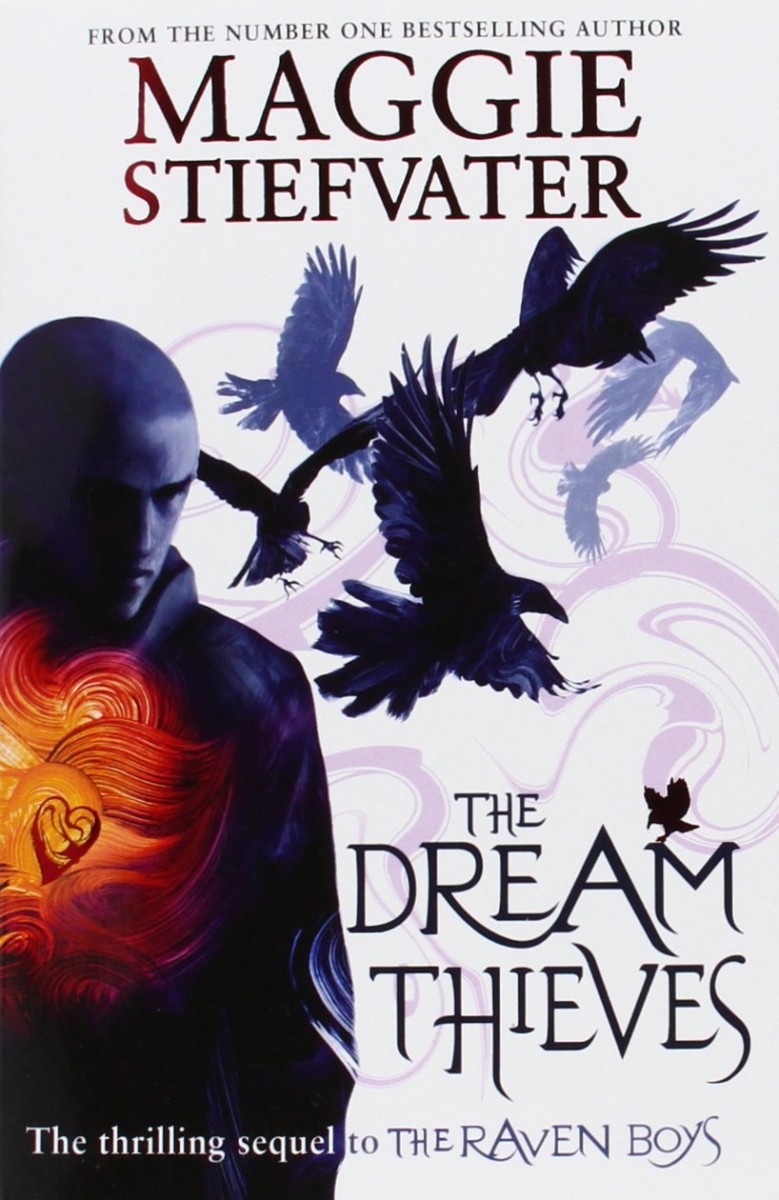 The Raven Cycle is a young adult series made up of four books, “The Raven Boys,” “The Dream Thieves,” “Blue Lily, Lily Blue” and “The Raven King.” I don’t know if it’s scary in a horror-film sense, but the themes and tone of the books more than earn themselves a rightful place on an October reading list. (Note: I would rate this at least PG-13 for use of the f-word, among other swears.)

The protagonists are Blue, a high schooler who lives in a household of psychics, and four boys, all of whom attend an expensive, all-boys boarding school, and most of whom have pretty dark secrets. Their ringleader, Gansey, is obsessed with his quest to find the living body of an ancient Welsh king, Owain Glendower, and brings his friends, including Blue, into his quest.

There are just two problems (okay, there are lots of problems, but these two are established at the beginning of “The Raven Boys”): 1) Blue has been told all her life by her psychic family members that she is destined to kill the boy she loves if she ever kisses him, and 2) Before meeting Gansey and the others, Blue sees a spectre of Gansey walking “the corpse line” in an old cemetary, which means he will die in the coming year. So death is an ever-present threat throughout the cycle, for these and other reasons.

One thing I like about The Raven Cycle is its mix of fantastical and believable settings. Despite the facts that the boys are on a journey filled with magic, and Blue’s family foretells the future, can tell the history of an object just by touching it, etc., they all have to deal with harsh reality as well. Adam, although he attends Aglionby, the boarding school, comes from a poor family. He works three jobs in order to afford tuition and has an abusive father who does not support his desire to make for himself a better life. Ronan Lynch’s father has been murdered shortly before the books begin, and although he is in many ways extraordinary, he is also just an angry young man who doesn’t know how to communicate or deal with his pain. Blue prides herself on being “sensible” despite her eccentric, loving family. She works as a waitress, goes to high school, and doesn’t let the boys push her around.

“[Blue had] gone through eighteen years as the town psychic’s daughter, she had already held every single possible conversation about that fact. She had been shunned and embraced and bullied and cajoled. She was going to hell, she had the straight line to spiritual nirvana. Her mother was a hack, her mother was a witch. Blue dressed like a hobo, Blue dressed like a fashion mogul. She was untouchably hilarious, she was a friendly b****. It had faded into monotonous background noise. The disheartening and lonesome upshot was that Blue Sargent was the strangest thing in the halls of Mountain View High School.”–from Blue Lily, Lily Blue

And, from Adam’s perspective:

“The students kept coming in. Adam kept watching. He was good at this part, the observing of others. It was himself that he couldn’t seem to study or understand. How he despised them, how he wanted to be them. How pointless to summer in Maine, how much he wanted to do it. How affected he found their speech, how he coveted their lazy monotones. He couldn’t tell how all of these things could equally be true.”–from Blue Lily, Lily Blue

The second book on today’s list is Doll Bones by Holly Black. I almost purchased this one for last year’s spooky reads roundup, and I was disappointed to realize TCCL didn’t have it available as an EBook through Overdrive. But on one fine Saturday morning in August, I took Joss to Whitty Books, a fairly new bookstore in the Kendall Whittier district, and there it was for under $7! Incidentally, while Whitty Books is fairly small, they had a good selection–besides The Doll Bones, I saw several other books I’ve had my eye on for awhile.

Doll Bones tells the story of three imaginative, middle-school children, Alice, Zach and Poppy, who have written themselves an interactive story involving pirates, mermaids, etc., which they act out using dolls and action figures. When Zach’s dad throws out his toys, including the one representing his favorite character, pirate captain William the Blade, he is too distraught to tell his friends the truth, and ends up telling them he simply doesn’t want to play the game anymore. It’s time to grow up. A few days later, Poppy wakes up Alice and Zach in the middle of the night with an eerie tale: One of the dolls (the “Queen” in their game), is composed of bone china, and the bones within the china belong to the long-deceased daughter of a former local potter. This girl, Eleanor, is now haunting Poppy, urging the friends to go on a quest and bury the doll in the girl’s grave.

So yes, it’s a ghost story.

But it’s also story about friendship–can the three stay friends in the face of crushes, different interests and social groups at school, arguments, etc.?–and growing up in a world in which growing up doesn’t seem all that appealing:

“If [ghosts] were real, then maybe the world was big enough to have magic in it. And if there was magic–even bad magic, and Zach knew it was more likely that there was bad magic than any good kind–then maybe not everyone had to have a story like his father’s, a story like the kind all the adults he knew told, one about giving up and growing bitter. He might have been embarassed to wish for magic back home, but there in the woods, it seemed possible. He looked over at the cruel, glassy eyes of the doll, so close that she could have touched his face.

Doll Bones is both creepy and heartwarming, and I highly recommend it to both adults and kids this Halloween season.

The House With a Clock in Its Walls

I’ve yet to see the new movie, but I’d been interested in reading “The House With a Clock in Its Walls” by John Bellairs since I’d heard about it on a list of Best Horror Books for Kids several weeks ago (long enough ago now that I no longer remember where the list came from, but it’s also listed in NPR’s 100 Favorite Horror Stories).

The protagonist of “The House With a Clock in Its Walls” is orphan Lewis Barnavelt, who has just come to live with his Uncle. Lewis quickly learns that uncle Jonathan is a wizard and that the old mansion he calls home holds a mysterious secret.

Lewis is terrible at sports but ends up befriending his new school’s top jock, Tarby, because the latter has injured himself and can’t play baseball at recess with the other students for several weeks. Tarby spends his weeks of recovery helping Lewis improve his own baseball skills, but as Tarby’s full recovery nears, Lewis starts worrying that he is going to lose his friend once he’s able to play baseball again (a valid fear, because Tarby is frankly a terrible friend). In order to keep this dying friendship alive a little longer, Lewis boasts to Tarby that he can do magic, even bringing people back from the dead. So on a dark night, Lewis and Tarby head to the old graveyard to do just that. Duh-Duh-Duh!!

“The House With a Clock in Its Walls” is creepy but not gory. I can see why this would be on a recommended-horror-for-young-kids list because there is a definite atmosphere of fear and a powerful ghost, but at the same time, there is enough zaniness between uncle Jonathan and his neighbor Mrs. Zimmermann that it is fairly lighthearted. This story is not about character growth in the same way that “Doll Bones” is–it feels more superficial, with the general tone of the story being more important than the relationships therein–but I did like how Lewis eventually came to realize that a friend like Tarby is no friend at all. And thankfully, Lewis is revealed to have formed a new, healthier friendship on the final page.

What’s on your spooky reading list this year? Have you or your kids read any kid-appropriate horror in the past year that you really enjoyed? 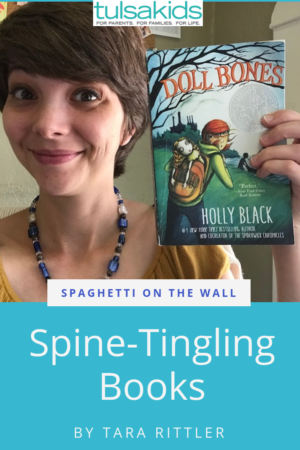