Monsters Under The Bed

I'm hoping that introducing Joss to stories about friendly monsters hiding under beds is not a terrible idea.

I‘m not exactly sure how this happened, but one of Joss’s favorite things to watch is “Brian and the Big Monsters”–aka “Little Monsters,” a very ’80s film to which Daniel introduced him. (Oh yeah, that’s how it happened.) 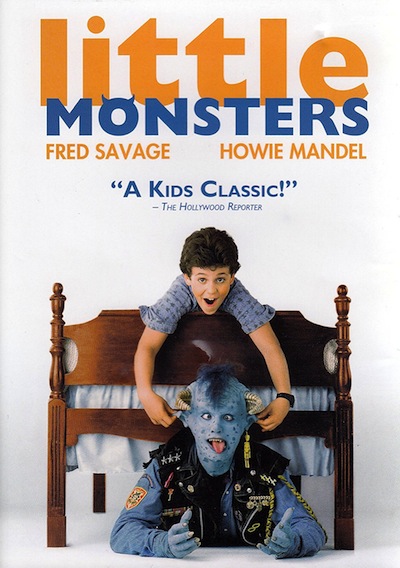 As you can see, “The Hollywood Reporter” calls it “A Kids Classic!”–which may be true, but it certainly is not intended to be a toddler classic. “Little Monsters” is full of fart jokes and father-son conflict and is the sort of film that would never have darkened the screen of our television when I was growing up. For now, this is all beyond Joss’s comprehension, but the minute he rolls his eyes and mimics, “Why don’t you start acting like it, Daaaaad?” his days of “Little Monsters” are over.

For those unfamiliar, “Little Monsters” tells the story of Brian, a lonely sixth-grader struggling to adjust to his family’s recent move and whose world is about to be further undone due to his parents’ deteriorating relationship. Although he had plenty of friends at his old school, making new ones is not easy and Brian feels isolated and miserable–until he captures and befriends Maurice, a monster. In the world of “Little Monsters,” monsters live in an under world of sorts but gain access to our world by climbing out from under children’s beds at night. Once here, the monsters wreak havoc such as hiding remotes and hiding half-empty cartons of ice cream on kitchen shelves–and of course, the kids take the blame for the monsters’ pranks. As Maurice says, “We’re the reason kids get locked in their rooms. We’re the reason brothers hate their sisters! We’re also the reason that parents send their kids back to camp.”

While this sounds pretty nasty, Maurice is a fun, loyal friend, and Brian is attracted to the monsters’ rule-free lifestyle and joins Maurice on his nightly rounds of mayhem. After awhile, though, Brian starts to realize that the life of the monsters has a dark side–not only is the monsters’ homeland ruled by a murderous, spoiled being named Boy, the more Brian takes part in the monster lifestyle, the closer he is to turning into a monster permanently. Plus, he (finally!) starts to become aware that hurting people–even the school bully–is wrong.

Ultimately, Brian realizes that life as a human–even with its rules and complicated relationships–is preferable to the lawless, loveless life of a monster.

And this is why, even though “Little Monsters” is not necessarily appropriate viewing material for Joss, I haven’t felt a need to ban him from watching it …yet.

But “Little Monsters” isn’t Joss’s only experience with monsters under beds (sadly, he probably won’t see “Monsters, Inc.” unless it’s on Netflix). While searching for scary(ish) children’s books for Halloween, I bought “I Need My Monster” by Amanda Noll, illustrated by Howard McWilliam. In this book, Ethan is worried when he reads a note from his monster-under-the-bed, Gabe, saying that he has gone fishing and won’t be back for a week. Ethan, convinced he won’t be able to go to sleep without his monster’s “comforting green ooze,” ragged breathing, etc., requests another monster by scratching on the floorboards underneath his bed. 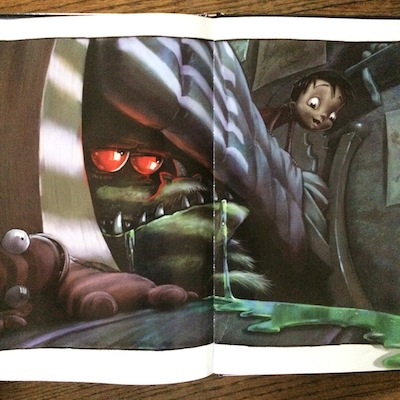 Ethan’s joy at the unexpected return of Gabe

Various monsters respond and are quickly rejected because they just aren’t scary enough. Finally, Gabe returns, complaining that he didn’t enjoy fishing because the fish scared too easily.

“You, however, are challenging, my friend,” he rasps. “You’re almost too old to be afraid of monsters.” 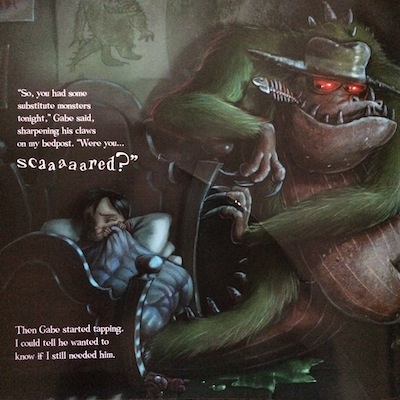 I’m hoping that “I Need My Monster” and “Little Monsters” will help keep Joss from ever fearing monsters under his bed. In both these stories, the monsters under the bed are friendlier than they first appear; and in “Little Monsters,” of course, Maurice offers Brian an escape from the truly scary, everyday things that come along with being human. But we will see. If Joss ever does develop a fear of monsters, I’m prepared to admit that any subsequent sleepless nights are my own fault.

Have any of your kids been afraid of monsters at night? How did you respond?

*Note* If your kids are afraid of the dark, here is a link to an article from TulsaKids’ October 2017 issue: “Seven Tips for Overcoming Fear of the Dark.” Let us know if you try these tips and how they work!