Money Saving Tips for the Fair

Can you believe I have 5 and 6 year olds who had never been to the fair until this year??

For a while they were so young they really didn’t know it was happening and weren’t disappointed to miss it. Then as they got older and were visiting their dad or other school/work schedules didn’t mesh, we just didn’t go. Last year, there were enough carnivals and other fall festivals to attend that they were happily appeased.

This year, though, my littles have been duly noting EVERY commercial on the radio and TV advertising for the Tulsa State Fair. I knew there was no way I was getting out of it this time! It’s not that I’m afraid of braving crowds or germs or fried food with my young children; honestly, coming up with the cash is more the thing that’s been stressing me out.

I studied and planned and counted my pennies, and we had a pretty darn fun time at a pretty darn good price, so I thought I’d share some of my tips with you! You can enjoy the pictures of our adventure while you’re at it.

Check out Dizzy’s Deals and Other Resources

First of all, before you go, check out the Dizzy’s Deals and Savings page on the Tulsa State Fair website. We went on 2 for Tuesday, which is over now, but there are still some great money saving promotions to be claimed!

Make sure you know how much you’re spending just on tickets to get in. Most of the schools are handing out passes for your kids to get in for just $1, but if you did the Tulsa County Library’s Summer Reading Program and hung on to your coupon book like we did, your kids can get in for FREE! If you go Monday-Thursday like we did, adults only pay $8 (versus $10 on the weekends), and on 2 for Tuesday, another adult could’ve gotten in for free when I paid. Unfortunately, my husband couldn’t make it with us, but I was still glad to save 2 bucks on my admission! 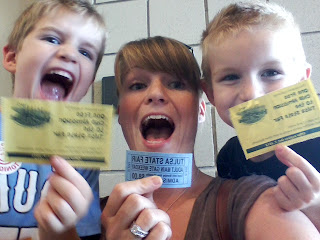 Think About Where You’ll Enter

Next tip, enter through the Quiktrip building instead of through the main gates that lead onto the Midway. That way you can take your time perusing the vendors, and do fun things like play in the brand new cars. If you have boys like me, they’ll LOVE getting in the driver seats of big, huge, shiny trucks! I mean, the fair isn’t JUST about rides and games (things that cost MONEY). Just be prepared for your kids to insist you sign up for every single giveaway, which means you’ll be committing to sales calls for a while! 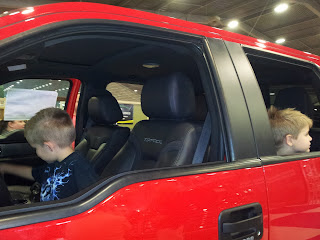 Once the littles had had their fill of me talking to the sales ladies at the Bee Sew Inn booth, I gave in and took them outside to the midway. Since it was 2 for Tuesday, all their rides would be 2 for the price of 1! I’d already decided I was prepared to spend about $20 letting them ride rides, so I bought 20 coupons from a ticket booth.

Then, I told them the first thing to do was to walk through the whole fair and see what all was there. We wanted to make sure we picked the very best rides and knew all our choices for food before we spent our money on something we didn’t want. They were amenable to  this. Taking them to the fair was worth it just to hear them ooh and ahh as they looked up into the sky to see the tall ferris wheels and roller coasters. They were utterly amazed, having never seen anything quite like it!

We settled on their first couple of rides. Most of the rides cost 3-5 coupons, just to give you an idea. So, $20 isn’t going to get you far, even with the 2 for Tuesday deal. That’s why you have to get picky about the ones you choose, and make sure you fill in the gaps with other activities! But they were thrilled on the Dizzy Dragon ride, 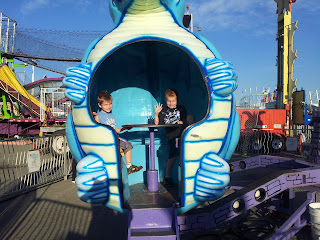 and the kiddie roller coaster. You’d think they were at Six Flags! 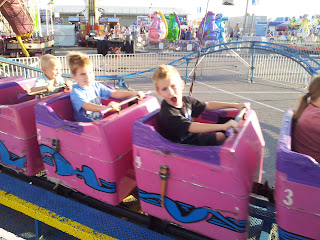 Don’t think there isn’t more to watch and experience besides rides, either. We caught a movie stunt show that was really fun. We watched men and women perform death defying stunts from over 40 feet in the air! 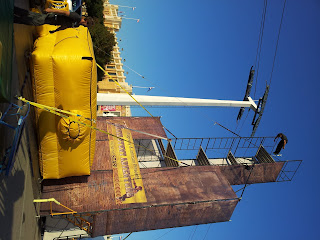 Next, we got something to eat. I’m NOT going to the fair and missing out on a corn dog. It’s just wrong, but I’m not about to spend $6 a piece for everyone to have food and then pay for drinks on top of it. If you’re going to the fair with littles who are also little eaters, do like we did. I bought one jumbo corn dog and one small lemonade shake up for the three of us to share (I also gave them snacks in the car on the way). We nibbled and sipped and walked around enjoying the sights for $9 (6 for the corn dog and 3 for the lemonade)!

The one ride I wanted to do with them was the Ferris Wheel. My most favorite is the sky ride, but you have to pay cash for that and it’s more expensive. I’d love to do both, but since we were on a limited budget this year and I had to pick one, I had to go with the classic. I told the boys this was THE classic ride of the fair. They were amazed as we stood in line underneath the rainbow wheel awaiting our turn to get on. 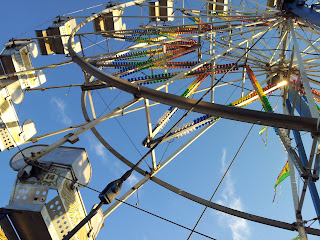 Once we were strapped in and the wheel started to turn, they were anything but disappointed, 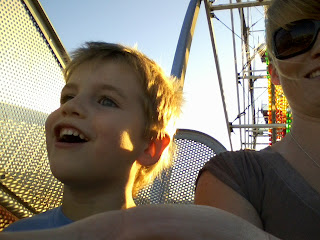 and I’m beside myself that I got to experience these moments with them! 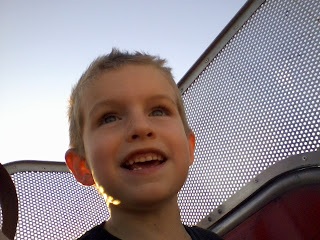 This was a moment I knew was truly unforgettable. 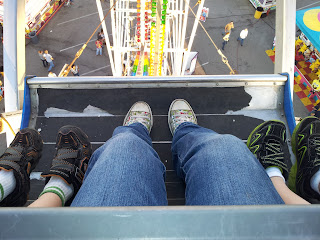 At that point, we had two tickets leftover and the boys were asking to go in the Fun House. I had visions of Grease running through my head and was weighing the song, “You’re the One That I Want,” running through my head with the fact that I needed one more ticket. I didn’t want them to miss out, so we headed to the ticket booth when a family passed on their way out and offered me one lonely ticket! They’d had their fun and didn’t need it, and we were happy to take it off their hands. So, next money saving tip is stand at the gate and ask people leaving for any spare tickets. JUST KIDDING – please don’t be beggars at the Tulsa State Fair, but maybe you’ll be as lucky as we were. On another hand, it sure wouldn’t be beneath me to send out a request on social networks to see if any of my friends had any leftover tickets to the fair they wanted to get rid of!

All that to say, the Fun House was all they hoped it would be. 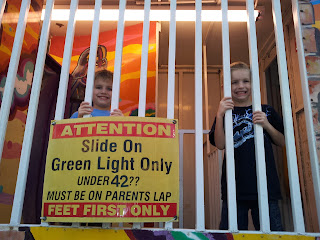 The last thing I wanted to spend money on was games. I come from a long line of skeptics, convinced that all fair and carnival games are a rip-off, and I definitely don’t like the vendors shouting at me while I’m with my kids, trying to goad me into forking over cash for them to disappoint my babies. That said, there are plenty of games that guarantee you a prize. Look the games over carefully to make sure they’re not so rigged that the kids can’t play it, and make sure they walk away with SOMETHING.

I did eventually cough up $5 per kid to play the balloon dart game, but they both popped balloons (and the guy promised me he’d keep giving them darts until they popped one), and they both walked away with cute little cows. Get good at your “Mom Face.” I gave the guy a mean mom face and assured him I wasn’t paying him unless my kids got a prize. *grin* 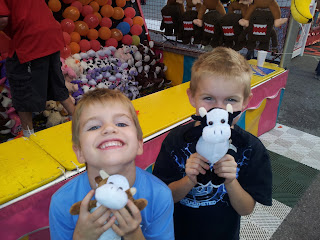 After that, I fully intended on spending the rest of our time looking at animals and doing things that costed nothing. On our way to look at the animals, Aidan said, “But Mom, we can go to the Zoo any time. Let’s do stuff we can’t do every day!” He had a point so I started rethinking my strategy. Just then, we found a dog stunt show to watch! It was a lot of fun and the perfect way to end our night. 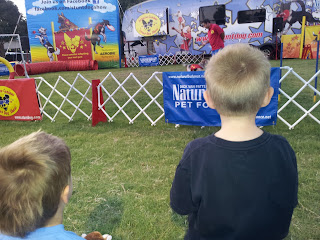 Alec even got picked as a stunt volunteer! He got to wag his tail (Alec) and crouch down so the dog could sail through the air leaping over him. He was beside himself with pride, and yes, I recorded the whole thing on video on my phone. 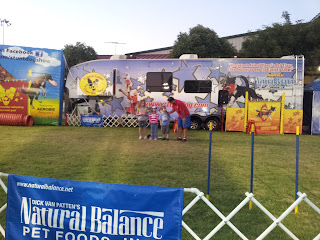 Last but not least, we just had to tour the RVs in the Quiktrip building on our way out. As a kid, that was my favorite thing to do with my mom at the fair, and I was thrilled to share this memory with my kids. We romped through some beautiful motor homes, and daydreamed about all the family road trips and adventures we could go on some day. 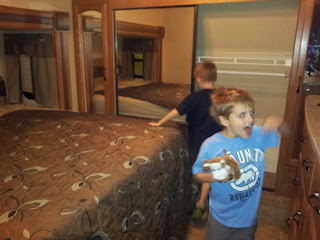 All in all, we made it out of there spending only $47. We certainly could’ve done it cheaper, but it’s a pretty good price to get a little taste of everything, and memories I’ll never forget.

What are your money saving tips for going to the fair? Please share!