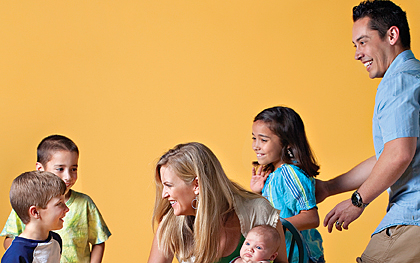 Blended families take work, but you can make it work!

The critically acclaimed TV show “Modern Family” takes a satirical look at families in America and, while it makes us laugh, we can also recognize the truth in the satire. The most recent statistics from the U.S. Census Bureau say that approximately 50 percent of all first marriages end in divorce. Of those, 75 percent eventually remarry, and about 65 percent of remarriages involve children from the prior marriage and form stepfamilies. That means (are you ready?) that, according to stepfamilies.info, “one out of three Americans is now a stepparent, stepchild, stepsibling or some other member of a stepfamily.” I fall into this new modern family category.

While I may not look like Gloria or have the wit of Cam on “Modern Family,” I do carry the battle scars of going through a divorce, of learning to share my child with a stepmother, of remarriage and of becoming a stepparent to two young children. On top of that, my husband and I have recently added a new baby to the mix. Let me tell you, it can be tough for everyone involved to face so many changes, but armed with determination, support and knowledge, blended families can work.

Fortunately, there are numerous resources for stepparents Annette Wallace, a licensed practical counselor and director of Responsible Fatherhood and Healthy Families for Family and Children Services in Tulsa, teaches a six-week course specifically for blended families.

“Stepfamily dynamics are very different from the traditional nuclear family,” Wallace says. “We try to make every effort to address the needs of a blended family in our workshop.”

Marrying someone who already has children changes the dynamics of a couple, according to Wallace. Couples without children tend to “grow” into creating a family together. When people who already have established families come together, they usually come from different backgrounds, and have different traditions and cultures. When the two come together as an “instant family,” it can create tension.

Being a stepparent for almost a year, I can attest to the fact that instant families can create instant tension. My husband and I don’t always see eye to eye on child rearing. I have one son, and my husband came into our marriage with a son and daughter. He tends to be more laid back, while I am a big believer in lots of rules. And our children are used to the way their respective biological parent has been running the show. All of a sudden, my son, who was an only child, had to get used to siblings, sharing a room and sharing my attention. Not only were a brother and a sister added to his life, he also became the youngest of three. That is a lot of adjustment for a small child.

“These factors are not always on parents’ radars when blending a family,” Wallace says. “That is why it is so important to have a parenting plan with your spouse.”

In the blended families workshop, the curriculum focuses on making a plan customized for each family. The workshop is very hands-on and helps each couple address issues that affect their family, helping parents and stepparents with the transition to becoming a blended family, while making sure the children are adjusting as well.

Wallace is a firm believer in family meetings. “This is very important because it gives the children a voice,” she says. “It also helps foster bonding between children and stepparents.”

Jason (not his real name to protect privacy), a recent newlywed and new stepfather of two, credits his wife for helping ease the transition for him. “She introduced me to the kids’ father, and that was very helpful – we were able to start off on the right foot.”

His biggest challenge with his new stepchildren was how they were going to share their mother’s attention. The children were used to having their mom all to themselves. Jason said that it took some time, but they have gotten used to the adjustment. He also has to remind himself that even though he loves his stepchildren like his own children, they are not, so he has to watch boundaries.

Not only is dealing with a new stepfamily challenging, it can be heart-wrenching when your own child becomes part of a stepfamily with your ex. As mothers, we are wired to fiercely protect our young. When another woman threatens our “territory” by becoming a stepmother to our child, it is probably the most difficult part of being divorced.

When my ex-husband got remarried, I did not adjust well to our son having a new stepmother in his life, as I’m sure it was tough for my ex to have another male in our son’s life. There is just nothing easy about it. However, the adage of “time heals all” does ring somewhat true. Although it is still difficult to share my son, I have realized and accepted the fact that he now has two families who love him very much.

To overcome the emotional landmines that can come with blended families, it is crucial to maintain on-going communication with all parents. I had some boundary issues with my son’s stepmother that I kept bottled up until one day I exploded. I should have addressed the issues right away, but chose to ignore them, thinking they would go away on their own. I was wrong. After a meeting with my son’s stepmother to discuss my issues, things have gone much more smoothly. It was a transition that certainly did not happen overnight, but the bottom line is that we all have my son’s best interest at heart, and that is all that really matters.

Co-parenting with an ex is an acquired skill. Stacy, a recently divorced mom is finding out firsthand how difficult this can be. When she first married, she had an instant family of two stepdaughters. It was tough for her to realize her boundaries because she didn’t have children of her own. When Stacy and her husband had a son, she said it all changed.

“I finally got it,” Stacy says. “All of a sudden I had such empathy for the girls’ mom – and I couldn’t fathom anyone else making decisions for my son. Now that we are divorced, my ex and I realize that we have to get along in order to make the best decisions for our son, and we are the only two that should be doing that – it is definitely not a stepparent’s role.”

In an ideal world, both parents should use mediation skills instead of arguing to come up with a compromise when parenting children, Wallace says. She also advises parents to use their heads and not their hearts when dealing with co-parenting issues. This can be difficult when you have the stepparent “whispering in your ear” about what he or she thinks is best. Wallace says to stay focused on your child and keep the stepparent’s thoughts out of your decision making when dealing with an ex-spouse about parenting the child you share.

The most important message, Wallace believes, is that parents need to remember that, no matter what, parents are the head of the household, not the children.

“It’s tough when kids pull at your heartstrings, and you feel awful because of what they have been through,” Wallace says.

As a divorced parent herself, she knows firsthand how important it is that you don’t let your emotions get in the way and give in to your children out of guilt.

“Children want and need structure and discipline, even though they may fight it,” she says.

As you get ready to expand your family, helpguide.org offers a few important things to remember:

Given the right support, kids should gradually adjust to their new family members. It is your job to communicate openly, meet their needs for security and give them plenty of time to make a successful transition.

An important part of building trust in a family has to do with discipline. Couples should discuss the role each stepparent will play in raising their respective children, as well as changes in household rules.

The following tips can help make this difficult transition a bit smoother: