How one group of young people changed a policy through protest.

Greetings, Nebulites. For today’s post, I’m going to share a totally true and mostly not hyperbolized story from not my life, but from my sweet husband Justin’s.

Dig if you will a picture. The year is 1988ish, a year of juxtaposition and uncertainty for teens and tweens everywhere. It is a year when Guess jeans reign supreme alongside preppy, pleat-fronted khakis that enhanced the weird, low belly fat look no one actually wanted to have. Thick, long rocker mullets abounded like glorious capes of coolness on the future Jordan Catalanos at Union Intermediate High School. Seated in the third row down, second desk over of Mr. Teacher Teacherson’s algebra class sketching the Black Sabbath logo on his Trapper Keeper in black Sharpie was our hero, a shortish, redheaded boy named Justin. 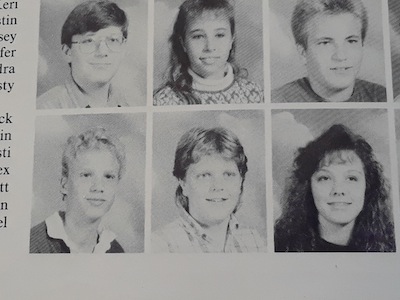 Somewhere across town, a girl he wouldn’t meet for several years, a seventh grader at Foster Middle School, was contemplating whether she would go to hell for listening to bands like Black Sabbath as she’d just sat through several sermons in her Southern Baptist church encouraging her to round up all of her (probably Satanic) rock tapes and destroy them, but this is not her story.

Justin was troubled for his own reasons, many of them having to do with a burgeoning sense of political justice and social obligations. Days before, Mr. Teacherson had stood before the class and announced a new dress code policy that boded poorly for fans of tasty licks across campus: Heavy metal band t-shirts had been recently disallowed. Deemed distracting and inappropriate, these frequently black and gothic-fonted tees were an affront to good American values, and in their infinite wisdom, the administration had decided these ubiquitous anti-establishment symbols had to go.

By sixth hour yesterday, the school was popping with rumors about a protest. At first, Justin dismissed these as loose talk. As a young teen, every rule in his life had been set in place without his permission. Every boundary and law and regulation had been determined without his say; it was part of the bargain of being a kid. You get to play and laugh and have fun while the adults foot the bill, clocking in and out of mind-numbingly dull jobs ad nauseam, but they draw up the terms of the contract.

But the more he thought about it, the more something started to eat away at him. Most of the rules he’d become accustomed to were set in place for his protection with some kind of common-sense reasoning behind them. This rule wasn’t meant to protect, but to homogenize. At an age where kids were starting to experiment with self-expression, band tees often functioned as a social code to others that you were part of the counterculture or at least not completely mainstream. He wondered about the implications. Could the administration next decide to force boys to cut their hair short or disallow ear piercings among males? Ban bold makeup for the girls?

That night, he had talked to a couple of friends on the Internet of the ‘80s, an ancient device once known as a landline. The impetus for some kind of a protest was picking up speed, but the idea of walking out during the school day was worrisome. Justin wondered how many students would be enough for the school to not suspend them all; he imagined that number would have to be pretty high.

Mr. Teacherson was saying something about polynomials as a small, triangular-folded note slid across Justin’s desk. He retrieved it quickly, bringing it down below the coverage of the desk to unfold it. Pencil-sketched, metalcore lettering read

The boy felt a surge of excitement and tension as he quickly refolded the note. He waited for the right moment and sent it sailing onward to the skater kid seated nearby. Was he going to really do this? If enough people were going to be there, maybe he would.

Over the next couple of days, he heard students talking about it everywhere. A girl with tall, fluffy bangs and a party dot in his social studies class had asked the teacher directly about the protest. Could the school suspend them all for protesting? Would this be a violation of their civil rights?

Mrs. Nice-Teacher had answered them just as directly. Yes, the school can suspend you, and they probably will if you decide to protest. But part of why protesting works is that it disrupts the order of things and shows that you are part of the system that matters. She explained that taking a risk is part of standing up for what you believe in, and you have to decide for yourself if what you believe in is worth taking that stand. You have to decide if risking that suspension is worth it to get the people in power to recognize your voice and give you an equal shake in that democracy.

With that, his mind was made up.

On Monday morning, Justin arrived at school in his Metallica shirt, awash in feelings of pride, worry, and excitement. Filing into the main commons were dozens of students bearing too many black tees to take in. There were zombies, toilets, skulls, orcs bearing swords, creepy eyeballs, and grim reapers. Metallica, Slayer, Iron Maiden, AC/DC, pentagrams and inverted crosses, metal as far as the eye could see. And among all the shaggy-haired boys and hairsprayed girls, safety pin punks and skater shoes, it was clear that these were generally good kids who simply felt impassioned about their right to express themselves. Approximately 75 – 100 kids participated in the sit-in, a tiny number compared to the thousands who plan to participate in March for Our Lives, a large-scale youth protest on March 24, 2018, when students across the country will ask Congress to pass legislation to address the mass shootings America has become known for globally.

A couple of kids addressed the administration on behalf of the group, and the administration acquiesced to open a discourse about revising the policy if the students would agree to return to class. Within a short time, the policy had been amended. Nudity, profanity, and anything promoting drugs or alcohol was disallowed, but the school relinquished the blanket ban on band tees (try saying that three times fast). To this day, Union Public Schools has an administrative culture of not policing personal expression, and Justin and his group of fellow metalheads played a significant role in establishing that culture.

To the rainbow-headed, tattooed and septum-pierced youth of today, he says, “You’re welcome.” 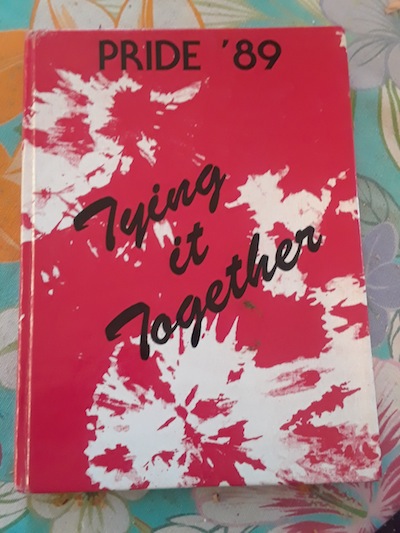 Justin told me (the far more minimalist version of) this story a few days ago. I was watching a clip of Emma Gonzalez, the young Marjory Stoneman Douglas student whose impassioned speech to reconsider gun legislation is quickly becoming the symbol of a powerful youth movement, and I remarked that I was impressed to see such young people standing up for what they believe.

“I’ve participated in a protest before,” he told me. He was driving us home from school. We always have the best conversations in the car.

“I know, I was there. We protested the invasion of Iraq. We stood on a street corner in the cold with all the other patchouli-smelling hippies,” I replied.

“Before that,” he told me. I was thunderstruck. “We protested a policy when I was in 8th grade, and we got the school to change it. Teenagers can make a difference,” he emphasized with an uncharacteristically serious tone.

I’ve always believed that young people are capable of so much more than we give them credit for. My grandma was married and raising a family by the time she was Emma’s age. Whatever the cause, young people have the passion of youth on their side, the capacity to grow and learn as they take up a cause, as they shout at the devil, fight against those whose dirty deeds are done dirt cheap and the war pigs, ring Hell’s bells like a mighty Iron Man.

Whatever an individual’s beliefs, it is important for young people to become actively engaged in the open discourse that help form the policies controlling their lives, whether through writing letters, connecting with policymakers personally, peaceful protest, or participating in healthy, productive debate. Know your rights, understand what risks you are willing or able to take in making your voice heard, and respect the feelings and beliefs of others in doing so.

To the bearded, ripped-jean-wearing, funky-haired, preppy, straight-laced, fandom-loving, cowboy-hatted, bescrunchied, natural haired, hard-working, academically-inclined, video-gaming, band-geeking, athletic, nerdy, beautiful, fabulous, brilliant, shy, loud, and wonderful youth of today, you have the capacity to change this world for the better, and as part of the generation that is passing the torch, I empower you to stand up for what you believe and make the world a better place for the generations yet to be born.

And no matter what you’re fighting for, remember this one thing: