It will probably be another year before I make the leap and enroll Joss in any kind of after-school program (with the exception of swim lessons…which I need to enroll him in ASAP! Don’t let me forget!), but I’m well aware that the options are endless and overwhelming. Martial arts? Soccer? Music?

Time, money, and a desire not to be stressed out will limit the number of activities he’s involved in, and as of yet, he hasn’t been begging for any extra classes. He already learns Hebrew, music and yoga at school, so I’m not (or at least trying not to be) concerned about the fact that many of his classmates have already been enrolled in extracurriculars for a few years now–or that I started learning violin at age 2! *deep breaths, he’s fine*

Anyway, ballet or other dance lessons are on my mental list of potential activities for Joss, although they were firmly on my list of “things NOT to do” as a child. Growing up, I always wanted to be considered more of a tomboy than a “girlie-girl,” (in reality, I was neither–just a kid who loved to read)–and this clashed with my naive prejudice towards ballet.

Now, I’m in awe of how athletic dancers are, and with that brilliant 20-20 hindsight, older, decidedly unflexible me is disappointed in young Tara for never giving ballet a chance. No, I don’t think that I missed out on a potential career option or anything–I stayed busy enough with music lessons that I wouldn’t have actually been able to devote loads of time to dancing–but it’s always disappointing when you look back and realize how mistaken your ideas were about something, in a negative, stunting way. Hopefully Joss will be less antagonistic toward dance than I was, and who knows? Maybe ballet lessons are in his future.

Although I’d previously taken Joss to “The Nutcracker,” this was our first time attending a performance at Studio K, a more intimate theater than the Tulsa PAC’s main stage. It was fun to see all the children in the audience, dressed up and excited to see the show! Several of them (ourselves included) took the opportunity to do a mini photo-shoot with the production poster in the lobby. 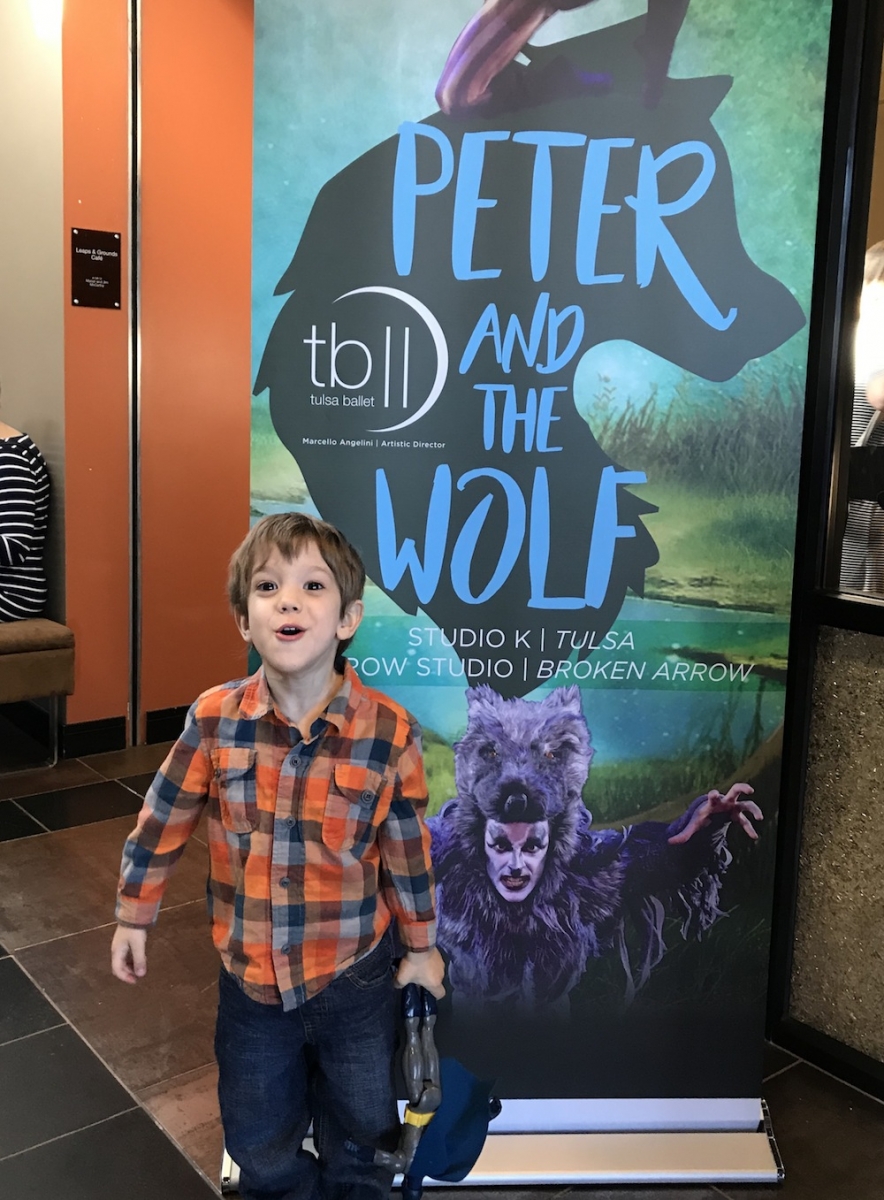 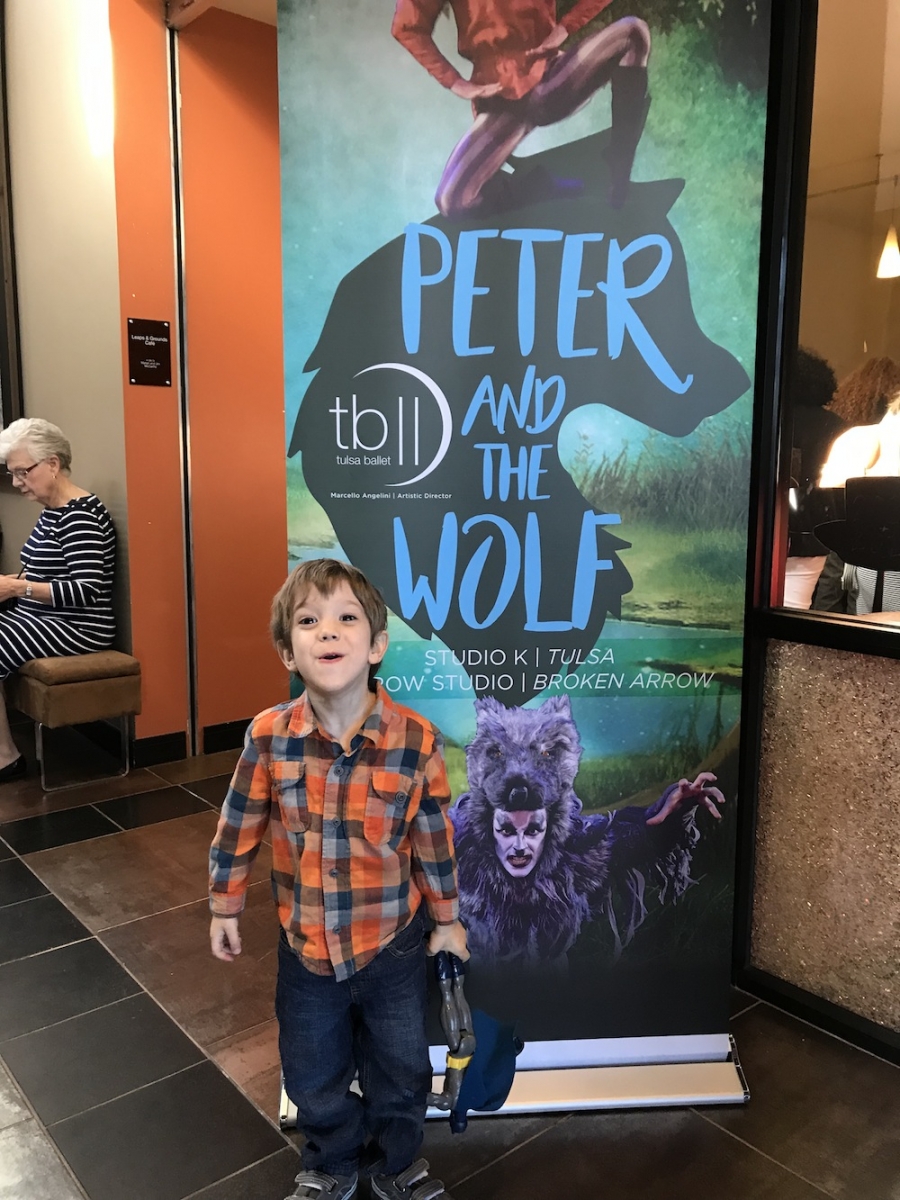 I asked Joss to do his best wolf face; he treated us all to a Hooooooooooowl!

Joss was fascinated by the program, asking me over and over again to tell him who the different characters were, and I was able to explain, by pointing to the dancers’ photos, how they came from all over the world–as far away as Japan, Italy and Brazil! 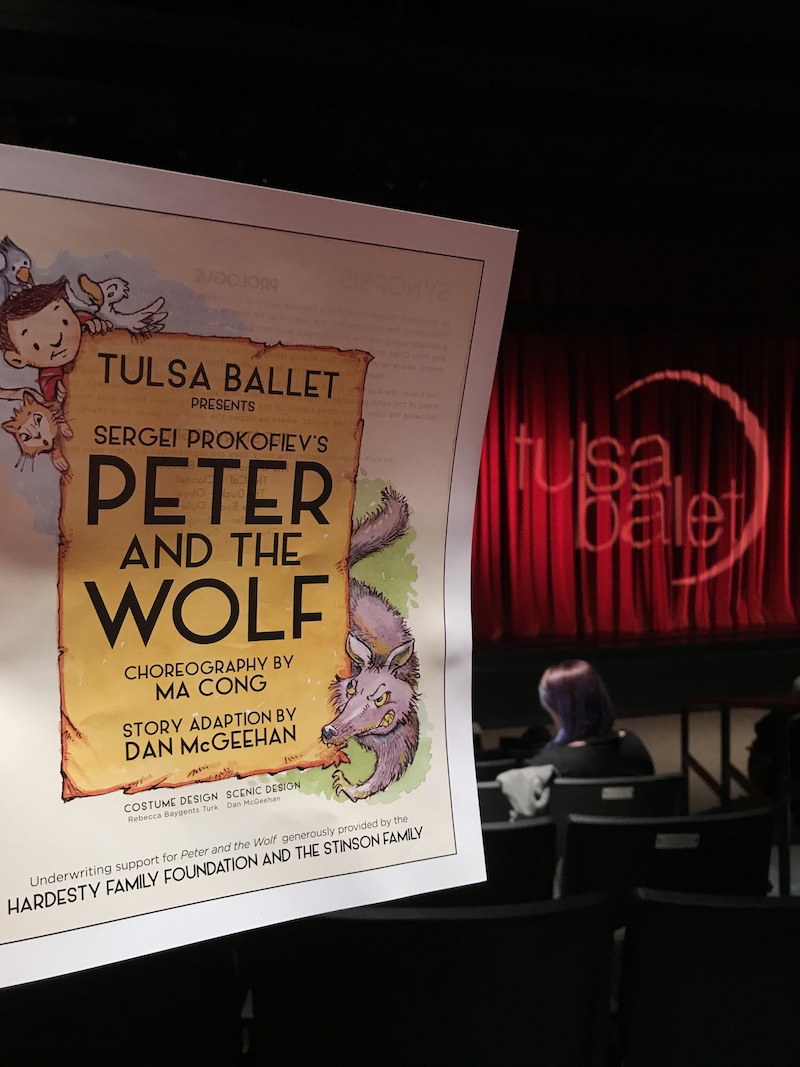 The best part about being in a theater full of kids is that you don’t have to worry so much about your own kid making inappropriate noises–although in this case, Joss actually did quite well! (Better than that time at “The Nutcracker” when he started singing out loud!) Plus, the actors ran up into the audience occasionally, making it a truly immersive experience.

If you do attend a “Peter and the Wolf” performance next season, be aware that there is a mildly traumatic part where the duck–who provides the best comic relief–gets eaten by the wolf! A young girl behind us started to cry, and there were cries of dismay from all over the audience. But don’t worry!! It turns out that the wolf swallowed the duck whole and alive, and she gets regurgitated at the end, with no lasting harm done. *Whew* I think I almost cried at that point, mostly just from imagining how relieved all the young audience members would be! But also–it was a really cute, funny duck. 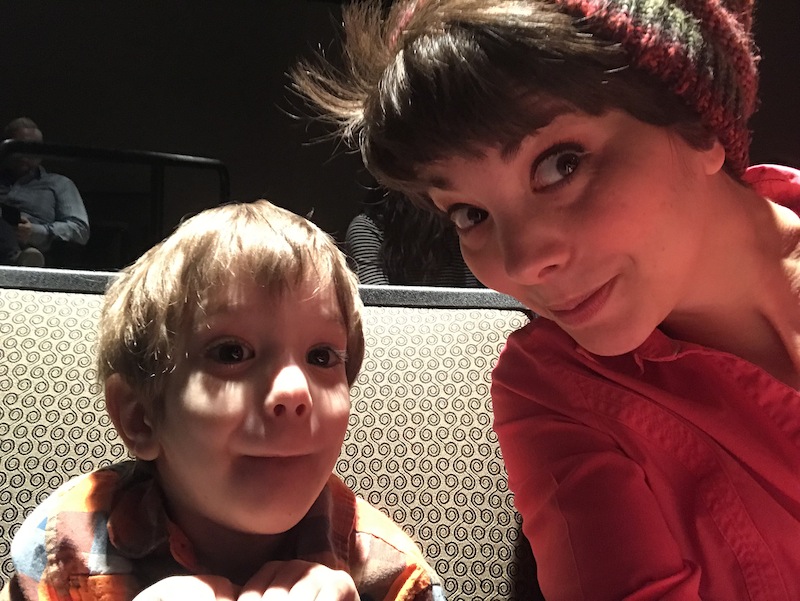 Sorry, no pictures of the awesome costumes, but…here’s one of us!

After the performance, the enter cast lined up along the stage for a Q&A session, which was a nice opportunity for fans to realize that the wolf was not as scary as he appeared onstage (he did leap about in a very threatening manner!). The first two questions were, “How did the duck come back?!” Which was answered to the effect of, “That’s ballet magic, you’ll just have to discuss it with your parents!” Several questions targeted specific cast members, asking when they started ballet, and why. It is astounding that the oldest one of them was 23–considering how far so many of them have moved to be part of Tulsa Ballet! I love that the audience members had this chance to directly interact with the performers–Joss wasn’t in a questions-asking mood and probably wasn’t paying close attention, but I can imagine how inspiring it would have been for other kids to get to hear the stories of the talented dancers up on stage, some of whom had begun their dance “careers” at age 3 and others who had begun later, like around 8. (See? Joss can still become a world-class dancer even if he doesn’t start right away!)

If you’re interested in attending a performance of “Peter and the Wolf” next season, here are the dates and locations: 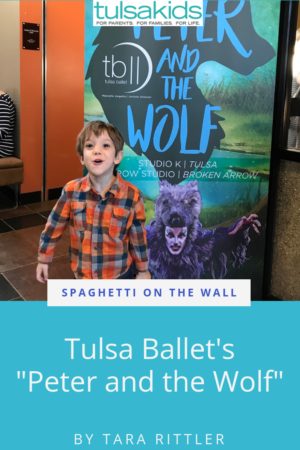