A primer for parents

With voter approval of Oklahoma State Question 788, the Medical Marijuana Legalization Initiative, the licensed cultivation, use and possession of marijuana for medicinal purposes is now legal in this state. While it’s clear medical marijuana is on its way, the reality of how this will actually look in practice for Tulsans is not yet known. Regulations continue to evolve as local government figures out the details. Meanwhile, many parents wonder what this means for their kids.

What is Medical Marijuana

According to the National Institutes of Health (NIH), medical marijuana refers to the use of the whole, unprocessed marijuana plant or its basic extracts to treat symptoms of illness and other conditions. Marijuana is derived from the Cannabis sativa plant. It contains more than 100 chemical compounds, called cannabinoids. When ingested or inhaled, these compounds act on the brain and nerve cells, slowing pain and easing discomfort. Currently, the two main compounds for medical interest are tetrahydrocannabinol (THC) – which creates the “high” – and cannabidiol (CBD). Medical marijuana can be consumed in a number of ways. It comes in a variety of forms, dried, edible or oil (smoking, vaporizing, edibles, tinctures, etc.)

While anecdotal evidence of the medicinal benefits of marijuana abound, currently, the US Food and Drug Administration (FDA) has neither recognized nor approved the use of marijuana plants as medicine. The FDA requires extensive studies in hundreds to thousands of human subjects to assess the risks and benefits of possible medications before approving them for use. The kinds of large-scale clinical trials necessary for FDA approval simply haven’t been done. However, scientific studies of cannabinoids have led to FDA-approval of medications that contain cannabinoid chemicals in pill and liquid form for some uses.

Scientists are currently conducting preclinical and clinical trials with marijuana and its extracts to treat symptoms of illness and other conditions ranging from HIV/Aids, multiple sclerosis and pain to seizures, inflammation, substance abuse disorders and mental disorders. Much remains to be discovered.

With the passage of State Question 788, individuals (including minors) with a state-issued medical marijuana license can legally possess, grow and use marijuana in a variety of forms, including plants, concentrates and edibles, and the legal consequences for possession without a license have been significantly reduced.

Just as the new legislation raises many questions about medical marijuana in an office/work setting, it also raises issues about its use by students in the public school system. Recently, the Oklahoma State Department of Education issued a non-binding document responding to some of these issues. More information can be found here: http://sde.ok.gov/sde/newsblog/2018-09-10/faqs-medical-marijuana.

Although Oklahoma has legalized medical marijuana, federal law doesn’t recognize or protect its possession or use. While someone with a patient license isn’t likely to be prosecuted under federal law, this conflict is still relevant. Under the Controlled Substances Act (CSA) of 1970, marijuana is classified as a Schedule 1 substance, meaning it is considered to have high potential for abuse and dependency, with no recognized medical use of value. Because of these conflicting laws, in Oklahoma, most physicians are currently unwilling to sign medical marijuana recommendations, and some local health-care systems specifically prohibit their physicians and providers from doing so.

Studies done on adults on the therapeutic effects of cannabinoids have shown them to be helpful in addressing some symptoms, such as increasing appetite and decreasing nausea and vomiting in patients receiving chemotherapy and reducing chronic pain with certain syndromes.

The only studies done on the use or efficacy of medicinal marijuana in children and adolescents have been limited to treating severe seizure disorders.

Dr. Susan Studebaker is a pediatrician with the University of Oklahoma Department of Pediatrics working at the Schusterman Clinic. According to Dr. Studebaker, the only approved use of medical marijuana by the American Academy of Pediatrics (the national professional organization for pediatricians) is for intractable seizures, severe seizures that are extremely difficult to control. Other uses for the drugs, such as with patients receiving chemotherapy or those with chronic pain syndromes, are not common in a pediatric patient population.

While many people tout the benefits of medical marijuana for treating anxiety, depression and other mental health issues, Dr. Studebaker is concerned about its use in teenagers.

“Research has shown that in adolescents who smoke chronically, it tends to actually increase depression over time,” she notes. “In the short-term, it may look or feel like you’re treating your anxiety and depression, but over time, with chronic users, it can increase mental health disorders and psychosis. We feel like, in the long-term, there isn’t a benefit for the adolescent population.”

Dr. Studebaker doesn’t believe there is currently enough hard data to justify marijuana’s medical use in teens outside of specific cases of severe seizures, chronic pain or chemotherapy, especially when weighed against the risks of chronic recreational use.

“The concern from a pediatric standpoint is that when medical marijuana is legalized or available, it’s going to be seen as a safe drug or a safe medicine to take,” she explains. “It’s not the one kid who smokes on Saturday night once in his lifetime. That’s not really the issue. It’s the chronic users. We know that their brains are still developing. We know that the prefrontal cortex hasn’t fully developed. Initial studies show that in teens who smoke greater than 15 to 20 days a month, it affects their executive functioning and their planning skills. Decreased concentration skills, decreased judgment and the fact that it can lead to increased mental health issues and psychosis – I’m worried that the general public may see it as a benign drug or medication and not see the potential harmful side effects down the line.”

Dr. Studebaker is concerned that the increased availability of medical marijuana in the adult population means increased access for teens. For younger kids, edibles and oils also pose threats.

“I think there are going to be accidents and ingestion just like there are with other drugs that get left out on the table around a toddle or young child,” she says.

Dr. Studebaker also notes that many of her patients who claim they would “never smoke cigarettes or do drugs” do not see a problem with smoking pot.

“I feel like it’s become mainstream to the point where people don’t see it as dangerous. I don’t think the general public sees that it potentially is, especially to the teenage brain that is still developing,” she notes.

While Dr. Studebaker currently doesn’t see many benefits for medical marijuana in adolescents outside its particular, documented and approved uses, especially when compared to the downside of chronic, long-term use, she encourages families and patients to discuss it with their physician if they have questions.

While many adults welcome the arrival of legalized medical marijuana in Oklahoma, questions and issues remain as to what this means for adolescents. As parents wait for the regulation and the research to catch up with the current law, it’s a good time to consult the experts and obtain as much good information as possible to help make informed and intelligent decisions. 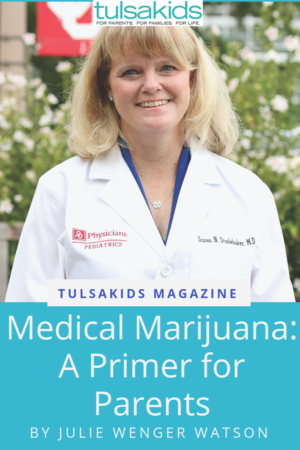