Maybe ‘Feel Good’ is What We Need

A review of "Green Book"

Green Book” takes viewers on a road trip through the American South in 1962. The film is based on a true story of pianist/composer Don Shirley (Mahershala Ali) who is black, and his driver, Tony “Lip” Vallelonga (Viggo Mortensen).

Tony Lip is a crude, nightclub bouncer from the Bronx with a tight-knit, extended Italian family. Tony’s nickname comes from his ability to talk his way into or out of anything. His immediate family includes a wife and two young sons, all of whom he is touchingly devoted to. The film opens with Tony Lip breaking up a fight in a nightclub and violently punching the life (almost) out of the perpetrator, but the audience is spared seeing the results. I was relieved, and hoped that it foreshadowed the lack of violence in the rest of the film.

Don Shirley’s record company has set up a two-month performance tour of the South, and Tony is hired by Don to drive him from Manhattan to Birmingham, Alabama and many points in between in the eight weeks leading up to Christmas. Tony’s infamous bodyguard abilities help him land the job.

In contrast to Tony’s baseness, Don is positively regal. Tony smokes constantly, eats loudly and emotes constantly, while Don admonishes him from the back seat. The contrast between the two sets up some humorous situations, like the scene where Tony learns that Don has never eaten fried chicken. “But it’s the food of your people,” Tony says. They stop at a Kentucky Fried Chicken restaurant in Kentucky (which Tony thinks is hysterical), and Tony introduces the fastidious Don to eating fried chicken with his fingers in the car and throwing the bones out the window.

While racism is inherently ugly and violent, don’t expect to see it at its most virulent level in “Green Book.” For that reason, “Green Book” is a film that you can take your children, middle school age and up, to see because of the gentle handling of a difficult issue. You will probably need to explain that The Green Book was a guide for black travelers to use in order to know their place – where to stay, where to eat, where to go for entertainment – without the humiliation of inadvertently walking into a “whites only” establishment.

Young people may feel outraged by the hypocrisy in the film, and they may recognize it in their own lives. Both are valuable takeaways.

It’s difficult not to feel outrage at the injustice of Don’s celebrity with wealthy white audiences while being treated as a servant at the same time. He can meet them, shake their hands and mingle, yet not be allowed to use an indoor bathroom or eat in their clubs.

In spite of the humiliation Don must endure, there is hope in the indignities and hypocrisies. Some people do step up and speak up. There are racist, prejudiced people, but there are also those who do the right thing.

The film may not surprise, because from the beginning, you will know that these two very different men will, at the very least, change and come to understand one another. But you will want to go along for the ride. Ali and Mortensen are talented actors. The film will entertain and touch you. I cried twice. As a lens on prejudice, it will magnify the random silliness of judging others by skin color or class. In this time of divisiveness, the warmth of individual humanity depicted in this film is a story that I’m thankful for. I highly recommend that you take your family on this road trip.

“Green Book” (PG-13) opens Wed., Nov. 21 at Circle Cinema. There will be a special event, Sunday, Nov. 25, 2 p.m., members of the Threatt family of Luther, OK, with be in attendance for an introduction and Q&A, offering personal insight and stories of the Threatt Family Filling Station on Route 66. 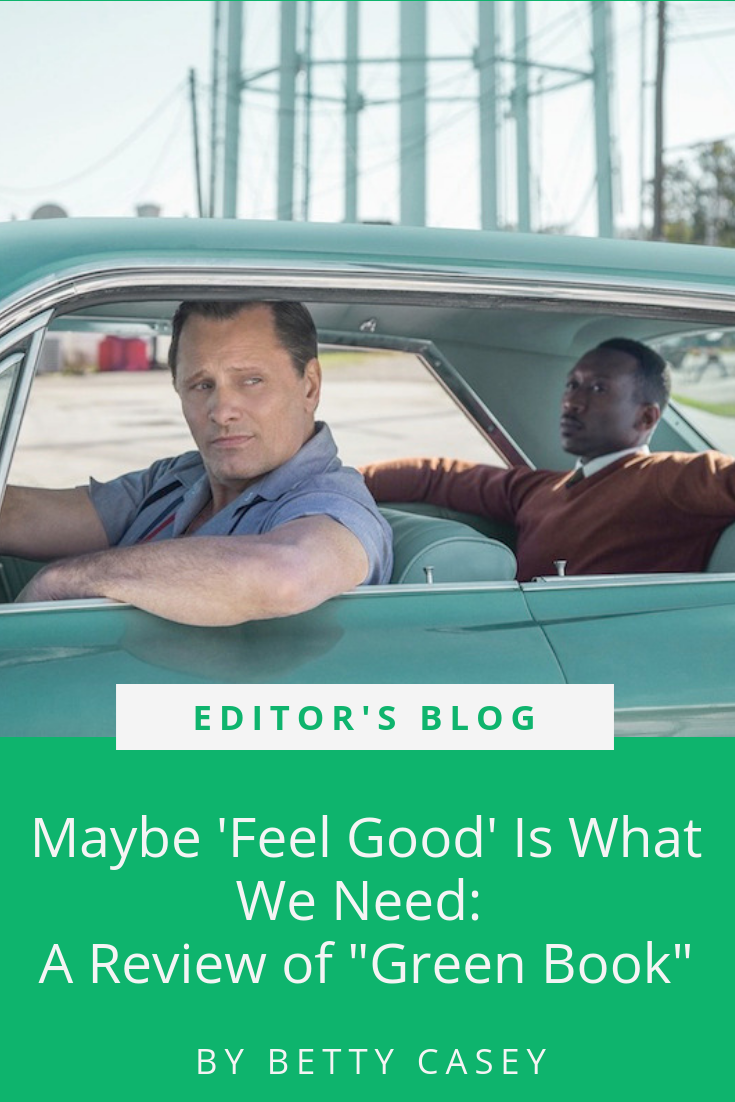