Over the past several decades, the general public has become aware of eating disorders and their profound mental and physical consequences. Eating disorders have the second highest mortality rate of all mental disorders (surpassed only by opioid addiction). While increased recognition of these disorders has helped advance their study and treatment, most people continue to associate them with adolescent females, when, in fact, research shows males represent a significant percentage of the affected population. As a result, adolescent males who struggle with these disorders are frequently undiagnosed and untreated, often with dire consequences.

Studies show that young people between the ages of 15 and 24 with anorexia have 10 times the risk of dying compared to their peers. Males represent 25 percent of individuals with the disorder, and they’re at a higher risk of dying than females – in part because they’re often diagnosed later, or not at all. “Subclinical” eating disorder behaviors, those that aren’t severe enough to be easily recognized as symptoms, are nearly as common in males as they are among females.

“Most of the work defining eating disorders has been done among Caucasian populations of females,” says Alison Field, chair of epidemiology at Brown University. Field’s research focuses on classifying eating disorders and identifying their causes and consequences.

“We know with many disorders, depending on gender, it can look really different. We know for heart attacks, for example, presentation could be different between men and women,” she says. “I’m very interested in how these disorders look in men, and how do we better capture and assess them. From our work, it looks like the consequences are just as severe for men as for women.”

According to Field, these differences mean that male eating disorders often go undetected by parents and healthcare workers.

“The stereotypical image is a thin, white woman, but actually the majority of eating disorders aren’t thin, white women,” she explains. “We know that they’re actually more likely to occur among people who are larger. What we really understand about what’s going on in males is that they have that same preoccupation with weight and shape. It’s just not to be very, very thin. It might be to have very low body fat and be more muscular.”

According to Field, one of the things both males and females have in common when it comes to eating disorders is using unhealthy ways to control weight. However, generally speaking, these methods differ by gender. For example, females predominantly use vomiting and laxatives in their quest to grow smaller, while males might use steroids, growth hormones and supplements – many of which are unregulated, adulterated and potentially harmful, especially during a time of peak growth – to achieve a lower level of body fat and gain muscle. In addition, males with eating disorders are more likely to exhibit impulsive behaviors, like using drugs and binge drinking.

Usually, disordered eating behaviors tend to appear later in males than in females.

“Boys hit puberty later than girls, about two years later on average,” she notes. “What we see is the shifting of behaviors so that they start a little later, which I definitely think does reflect the different pubertal timing. With boys, it’s really later adolescence and young adulthood that we see this.”

As harmful as eating disorders can be, Field believes there are numerous challenges to recognizing and treating them, including lack of funding for research as compared to other psychiatric disorders and even disagreement as to how to categorize them. It’s her opinion that eating disorders should be approached more like autism. In other words, look at the disorder as a spectrum, with the knowledge that early intervention can produce a better outcome.

“This captures a range of kids from those who are not very affected to those who are severely affected,” she says. “For most psychiatric disorders, the bar is very high for what is considered a disorder. I think it’s more of a continuum. Try to see what would happen if we intervene early. Would it be incredibly advantageous?”

Often it can be difficult to tell where healthy behavior ends and unhealthy obsession begins.

“We have this problem of excessive exercise in men and women. We want Americans to be more active, and most Americans don’t get enough activity,” she says. “Unfortunately, among those who do, we have a nontrivial number who get too much, who aren’t very good at moderation. It can be tricky to figure out what’s excessive exercise. Certain sports require a lot of training.”

While a national focus on healthy eating and maintaining a healthy weight would seem to be a good thing, this, too, can be complex.

“There’s been so much concern about obesity that people think being concerned about your weight is a good thing, that it’s going to keep you from gaining weight,” Field observes. “It’s actually not the case. People who are very concerned about their weight, at least in women – we haven’t looked at men – tend to gain more weight and are more likely to pick up unhealthy behaviors like binge eating. So, shaming people about their weight as a way to encourage weight loss normally doesn’t work. It really backfires.”

For parents who are worried about their child’s attitude towards his or her eating, but don’t know what to do, Field offers some suggestions.

“One thing I would do, and I think it’s true for girls as well as boys, is really listen,” she says. “Ask your son if he has a goal and what he thinks will happen when he reaches his goal. A lot of times people will think that things are really going to change in their life, or they have unrealistic expectations. If he seems to be taking extreme measures or is radically changing how he wants to eat, you might want to suggest talking to his pediatrician or someone with nutrition expertise to give you a plan. If you have an adolescent medicine specialist, that’s all the better. They’re really good at talking to teens. If you’re seeing rapid changes, or suddenly your child wants to make really large changes in how they’re living their life, it could be healthy or it could be unhealthy, but it’s something to dig a little deeper into.” 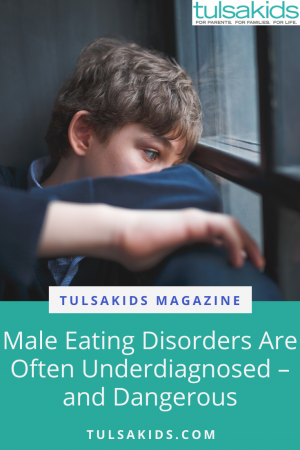