Like many, I’ve started looking forward to facing a new Wordle challenge each day. If you haven’t played, Wordle is a simple online word game, where you have six chances to guess a five-letter word. You start by guessing a word at random. If any of the letters in your submitted guess are correct and in the right place, they’ll become colored green. If any letters are correct but in the wrong place, they’re colored yellow. And any letters you’ve guessed that aren’t actually in the word are colored gray. This way, you narrow down your list of suspects/letters, and hopefully are able to guess the word successfully! It’s challenging, fun and a nice opportunity for introducing some extra rivalry into your relationships, ha.

About the same time as I discovered Wordle, I was also reading Winterhouse, a book that involves a lot of word games. (I checked it out from the library on Kindle.) Together, these inspired me to put together a list of word games you could play at home with your kids. Please add anything else you can think of in the comments! 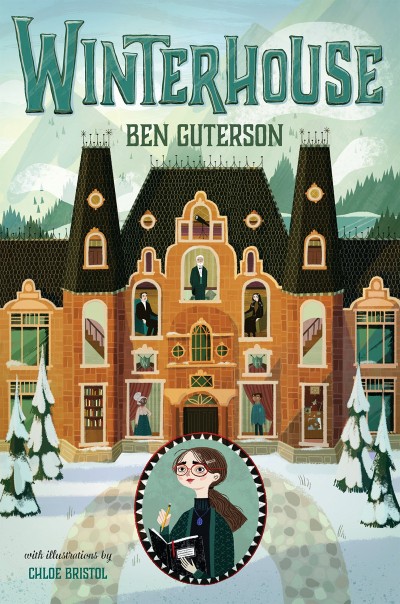 The young protagonists of Winterhouse are naturals when it comes to anagramming. If you need a refresher, an anagram is a word (or phrase) rearranged to spell something completely different, using ALL the letters of the starting word/phrase. For example (from “Harry Potter and the Chamber of Secrets”), “Tom Marvolo Riddle” could be rearranged to spell, “I am Lord Voldemort.” If you want a laugh, check out these “rejected anagrams” of Tom Marvolo Riddle: sparknotes.com/blog/rejected-anagrams-that-came-before-i-am-lord-voldemort.

Play an anagram game by choosing a word or phrase and seeing who can come up with the first (or most) anagram. Probably best for older kids, or young literary geniuses? I’m pretty sure I’d be terrible at this, but it would certainly get my brain working!

Each chapter of Winterhouse starts with a word ladder. And at one point, the protagonists make a game out of them. One person chooses a four-letter word. The other person chooses a different four-letter word (bonus if it relates to the first in some way). Then, you see who can transform the first word into the second word in the fewest amount of steps. For each step, you change one letter to create a new word. 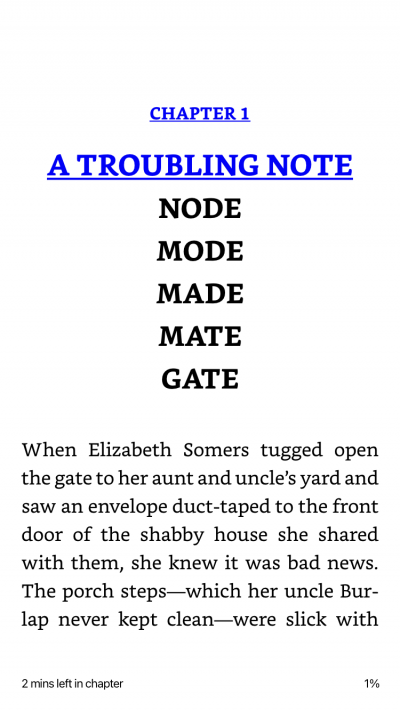 Screenshot of the opening chapter of Winterhouse

Ah, I included this in a previous blog post about stay-home activities. This is a game played with a group. For each turn, someone picks a book off the shelves and reads the title aloud. Everyone else writes what they think a believable first sentence for the book would be, while the book chooser writes down the actual sentence. Make sure everyone has a similar looking sheet or strip of paper! The book chooser reads all the submitted sentence out loud, including the actual first sentence. Everyone else has to guess which is the real first sentence of the book. If this is too stressful, you could also guess the last word of the book.

You can buy a version of this game or save money and just use the books you have on-hand.

Similar to Ex Libris, this one requires some creative thinking! You start with a word most people wouldn’t know the definition of. Then, everyone writes down what they think the definition of the word might be. Or at least something that sounds believable. One person could choose the word out of a dictionary and write down the actual meaning. Or again, you can purchase the game ready-to-go. The definitions are read off, and people try to guess which is correct. Use a point system similar to the one described above, or create your own.

There’s probably an actual name for this game, but I don’t know it. It’s like anagrams, but simpler. Instead of having to use all the letters of a word/phrase to form something new, you can just take a word or phrase and see how many words you can come up with using the letters provided. But you don’t have to use all of them at once. We used to play this one at Valentine’s parties at my Grandma’s house. She loved word games – especially Boggle! We’d start with the phrase “Happy Valentine’s Day,” and then everyone would have 5-10 minutes to list as many words as they could think of. For example,

Those are very short words. You can either assign points simply by the number of words someone comes up with, or give more points for longer words.

Another idea would be to pick a combination of letters and try to think of as many words that include that letter combination. For example, “shed” – washed, polished, varnished, mashed, etc. (Thanks to the Taskmaster Board Game for that idea!)

I found this suggestion in this extremely thorough list of Word Games, dailywritingtips.com/list-50-word-games. This list covers apps, board games, computer games, role playing games and more. So it’s worth checking out! They call this game “Consequences,” but it reminded me of Exquisite Corpse – the game where each person draws a section of a picture, folding over their contribution before handing it to the next person, who adds the next bit. For this game, each round has a vague writing prompt. You write down a one-sentence contribution based on the prompt, fold it down and then pass it to the next person. They’re given a different, vague prompt. At the end of the game, the full story is read out loud. Click here for an example: onestopenglish.com/support-for-teaching-writing/teenagers-writing-consequences/146818.article.

Here’s another find from that list of 50 word games. And if you’re a fan of Wordle, this will probably be right up your alley. Here’s an explanation about how to play, from Wikipedia:

Since you’re not told which letters are in the correct place, this is even tricker than Wordle! And I’m very excited because I just learned the word isogram 🙂

Scattergories is one of my very favorite games! This is another you could purchase or DIY. Each round, you’re given a list of ten(?) categories. You roll a 26-sided dice (or just pick a letter at random), and have to think of items in each category that begin with the chosen letter. There’s a time limit, of course, which you can choose – 3-5 min. perhaps. For every answer you write down – that no one else has written down – you get a point. Keep playing the game for several rounds, using a different list each time. When you’re done, add up the points from each round to see the winner!

I used to love doing the cryptogram in my mom’s daily paper! Cryptograms are coded messages where each letter is substituted for a different one. You have to figure out which code letter stands for which actual letter. You may get a hint to begin with (for example, C=A), or you can use context to help. For example, a single letter word will always be “A” or “I”. A four-letter word that starts and ends with the same letter is usually “that,” if I remember correctly. Build your own Cryptograms with the help of this online puzzle maker: puzzlemaker.discoveryeducation.com/cryptogram. Or have some fun coming up with your own!

Here’s a fairly dull one I created using the puzzle maker:

10. Name Your Own Pig Latin

Pig Latin is a classic language game/code. Joss has been loving Phineas and Ferb lately, and we just watched the episode where they invent “Ferb Latin.” Basically, pig latin, only instead of adding “-ay” to the end of each word, you add “-erb.” For example:

This morning on the way to school, I realized we could invent our own version of “Joss Latin”:

And I’m sure many other names lend themselves to this sort of thing as well! I think this could be a really good exercise for giving kids practice in identifying the first sound of a word. Plus, how cool to have their very own “secret” language?

Secret codes – in particular, the Vignére Cipher – were another key aspect of Winterhouse. This article from Melissa & Doug shares six secret codes your kids might enjoy trying to crack and create: melissaanddoug.com/blogpost?postId=6-secret-codes-for-kids. I don’t think it explained how the Pigpen Cipher works, so here’s some more information about that: en.wikipedia.org/wiki/Pigpen_cipher.

This isn’t a secret code persay, but I asked my husband if he had any word game suggestions for this post. He remembered learning elvish as a kid. Which reminded me that I also went through an elvish spell in high school – and still have the Guide to Middle Earth Languages book to prove it. What I remember mostly was learning the Anglo Saxon runes that Tolkien based elvish off of (if I remember correctly).

You can purchase books of mad libs very cheaply, I’m sure. Or, you can write your own! Have older kids practice writing their own stories, and explain about removing key words. Of course, they’ll have to think through the function of the removed word – is it a verb, noun, etc. For younger kids, you could write simple stories for them, and just ask them to supply the missing words.

Here’s some interesting historical information, thanks to Wikipedia:

“Mad Libs was invented in 1953[4] by Leonard Stern and Roger Price. Stern and Price created the game, but could not agree on a name for their invention.[3] No name was chosen until five years later (1958), when Stern and Price were eating Eggs Benedict at a restaurant in New York City. While eating, the two overheard an argument at a neighboring table between a talent agent and an actor.[3] According to Price and Stern, during the overheard argument, the actor said that he wanted to “ad-lib” an upcoming interview. The agent, who clearly disagreed with the actor’s suggestion, retorted that ad-libbing an interview would be ‘mad’.[3] Stern and Price used that eavesdropped conversation to create, at length, the name ‘Mad Libs’.[3] In 1958, the duo released the first book of Mad Libs, which resembled the earlier games[5] of consequences and exquisite corpse.”

13. Board and Card Games

Of course, you have your classic word games like Scrabble and Boggle, which you probably would need to purchase outright. Bananagrams is another that I haven’t played but would probably be enjoyable. And it looks like the company has created several other word-oriented games in addition to Bananagrams. Find them here: bananagrams.com.

Again, let me know in the comments if you have a favorite word game to play! I’d love to discover something new! 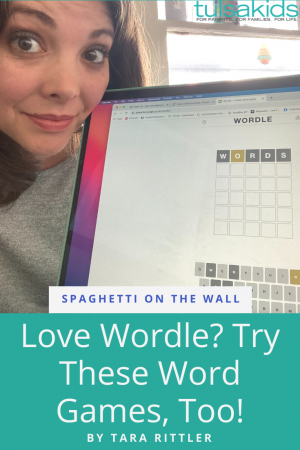