Partners in life, love and business 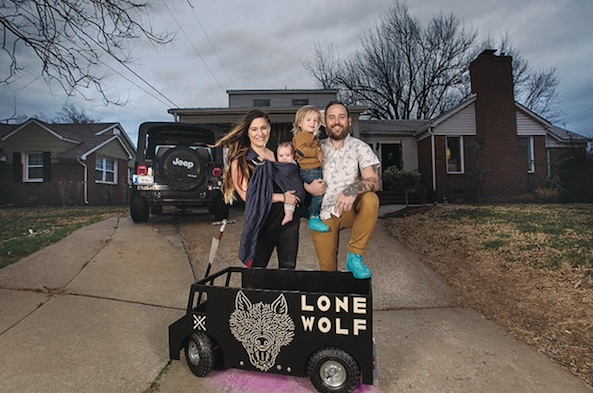 Philip and Danielle Phillips are partners in life, love and business. Although this couple has been together for 11 years, it has only been over the past four years that their lives shifted into high gear. During that time, they got married, purchased a home, opened a wildly successful food truck, started a family and battled on season two of Restaurant Startup on CNBC. Our interview took place at their new Lone Wolf take-out location at 37th and Harvard where I witnessed customers waiting in their cars for the doors to open at 11 a.m., followed by a consistent stream of people ordering their favorites once the restaurant opened. During my visit, the Phillips’ shared their excitement and passion for what they are doing, their perspective on the food truck craze in Tulsa and their plans for the future.

TK: How did you become passionate about cooking and food?

Danielle: We’ve always been foodies. Philip’s always worked at various places cooking while touring as a musician. It was an easy and flexible job to work around his music. Over time, he became much better at cooking than playing music. We loved eating at food trucks together all over the country, and we knew we wanted to own a food truck.

Philip: While touring, we would see all the cuisine on the coastlines along with various food trucks and that culture. A major part of doing this is because I was a musician in the first place. To me, there is an excitement and buzz surrounding food trucks which is similar to the music scene. I am passionate about creating, and it comes through in my cooking.

TK: How did you become interested in opening a food truck in the Tulsa area?

Philip: We are both from around here and have our families close by. We didn’t really have a plan for opening an expensive restaurant, but knew that we would be able to successfully and relatively inexpensively open a food truck first. Also, with food trucks, there is an excitement in hunting them down. And trying different cuisines coming out of the food trucks is a culture that we wanted to bring to Tulsa.

Danielle: Opening banh mi (Vietnamese sandwiches) was not the original plan for the food truck. We had already written out a menu of what we wanted and then Philip went on a West Coast tour and while we were in San Francisco, we stumbled on a banh mi place that was incredible. We had never really had it all together that way in banh mi. We couldn’t get enough of it. Once we were back in Oklahoma, we were still thinking about it. Philip started making it at home and we hosted dinner parties and invited friends over so we could test the banh mi concept. Everyone went crazy for it, and we had them calling the next day saying they were craving it and wanted more. Part of the success was in expanding people’s palates, and we knew this type of food wasn’t in this market yet.

TK: Your popular and unique food inspired by a combination of Vietnamese and French flavors earned a spot on season two of Restaurant Startup on CNBC. How did that opportunity come about?

Danielle: The show contacted us, which seemed pretty unbelievable; we still aren’t sure how they found us. We assumed it was through Facebook. It was a cool experience and exciting to gain national recognition. It was an intimidating situation cooking for Tim Love and Joe Bastianich, but one we learned so much from.

Philip: Before we went on the show, we already had a clear vision of where we wanted our business to go. In the end, the offers that were made did not meet our expectations, so we ended up not taking the deal, but we definitely benefited from the entire experience.

Danielle: It definitely opened our eyes to exactly the way the business side of the restaurant should be run. It was exciting to be featured for our food and showing our unique spin on banh mi that includes the traditional Vietnamese combined with a French flair.

TK: What is the best part about owning your own business?

Danielle: The flexibility. It helps to have good people working for you, so if something comes up and Philip and I have something going on, we know that the restaurant is in good hands.

TK: What advice would you give to someone looking to start a business?

Philip: It’s definitely a labor of love. If you’re not passionate about it, then you shouldn’t do it. Opening a business is very serious especially when you have so many people working for you, relying on you. There is never a time when there is nothing to do. We are working seven days a week.

TK: What’s the best advice you received when starting your business?

Philip: We received the best advice from Phil and Miranda Kaiser, owners of Laffa and Cosmo Cafe. They suggested that we make distinct roles for each other and stick to them. We have done that, and it has been great for us. We totally support each other and go with the other person’s decisions no matter what they decide. Danielle takes care of the business side, and the food and employees are my part.

TK: What are your most popular dishes?

Philip: Everything is made from scratch, which is an unbelievable amount of work, but is worth it. Our most popular dishes are definitely the Kung Pao Pork and Lemongrass Buttermilk Fried Chicken.

Danielle: Since the beginning, the menu has evolved. Philip is really good at what he does which is how so many of our popular dishes are created. One of the most popular items is the kimchi fries, and most popular dish is a fried rice bowl called “The Jam,” topped with candied bacon and Korean roasted peanuts. The idea of the fried egg on the top of the kimchi fries came from us having the food truck at a morning race event. It has been so popular ever since, we’ve left it on our menu.

TK: In your opinion, what do you think of the Food Truck scene in Tulsa?

Philip: Tulsa is really in the beginning stages of having food trucks. There is an exceptional amount of room for growth in this area. Really, there are maybe 50 food trucks around Tulsa (compared to maybe five hundred in Austin) and we can support so many more. Our food truck stays busy seven days a week. The trick is to be places on a regular basis so people know where you’re going to be.

TK: What does the future hold for your business?

Philip:  We have developed a successful model of Lone Wolf and are at the beginning stages of multiple locations being opened throughout the Midwest. Locally, due to the demand, we have opened a take-out location and are looking for another place to have a food truck in South Tulsa.

TK: What do you like to do with your family when you have time off?

Philip: We take the kids to the Tulsa Children’s Museum. It’s absolutely one of the best places on earth.  We also like go to Chimera for Sunday breakfast together.

Danielle: On Wednesdays, we go to Storytime at Guthrie Green. We also spend a lot of time at the park. My kids love being outside.