Combining two of my favorite things!

I was looking for a gift on Amazon the other day, and stumbled upon a new realm of cookbooks inspired by literature! Yes, I’d known about “The Unofficial Harry Potter Cookbook” and have owned “The Boxcar Children Cookbook” since childhood (I still make their Canoe Trip Pancakes on occasion!), so this wasn’t an entirely new discovery. However, there were so many new and beautiful books I’d never heard of before that it seemed blog post-worthy.

I’d actually started a blog (years ago) called “Biblionibbles,” which was envisioned as a collaborative effort between literary- and culinarily-minded friends. We would post recipes inspired by the books we read. This was by no means a novel idea, and it died out after about three posts–my favorite being Alice Medrich’s Tiger Cake, inspired by “The Incorrigible Children of Ashton Place.” I love this series AND this cake, by the way, so by all means, check them both out!

All that to say, cookbooks inspired by literature are RIIIIIIIGHT up my alley.

The first book I purchased (to give away–but I did take a few screenshots first!) was “The Wizard’s Cookbook: Magical Recipes Inspired by Harry Potter, Merlin, The Wizard of Oz, and More.” 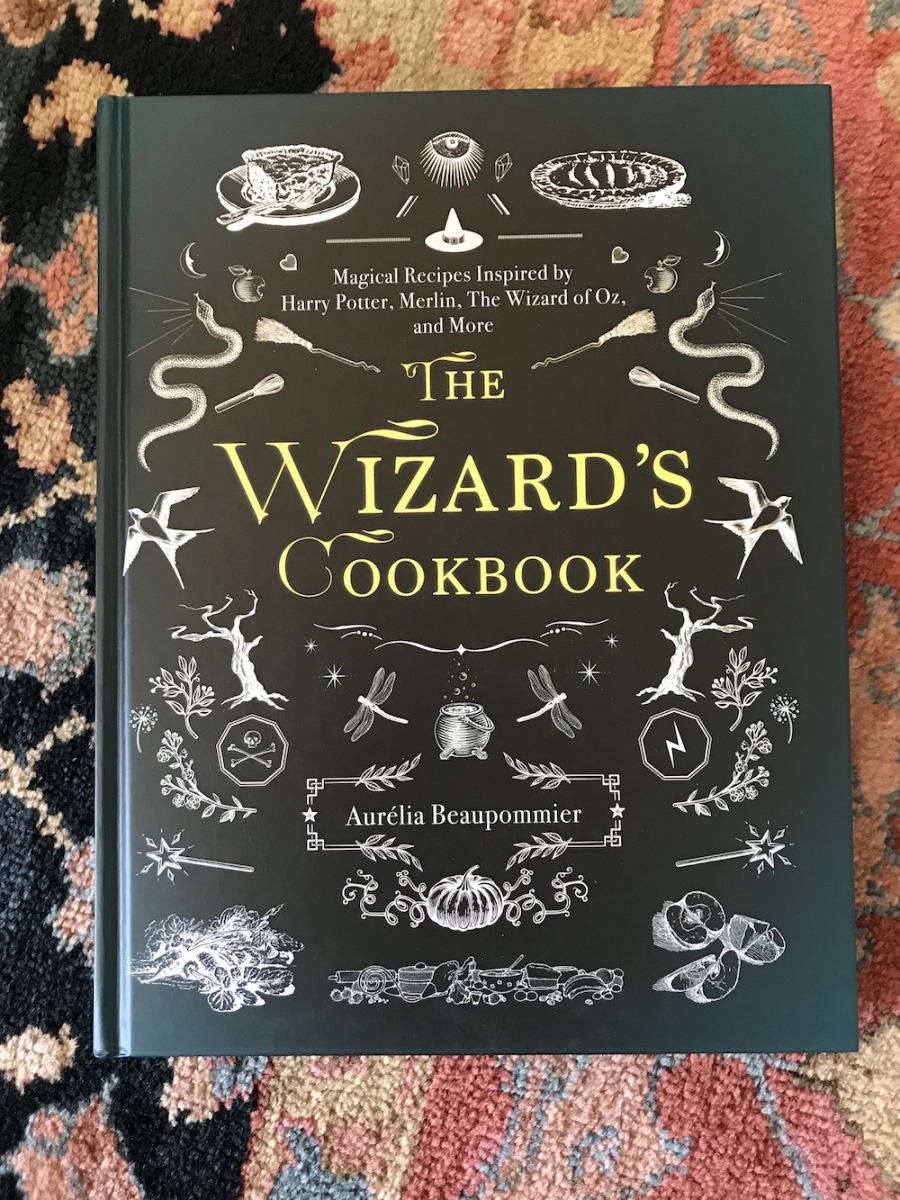 I like this book because it “stays in character” throughout–which may make some of the recipes a bit hard to decipher, but if you want to really feel like a wizard while cooking, instructions like “marinate for the time it takes to cast a spell over a Smurf” may help. Even the Table of Contents starts with a spell! 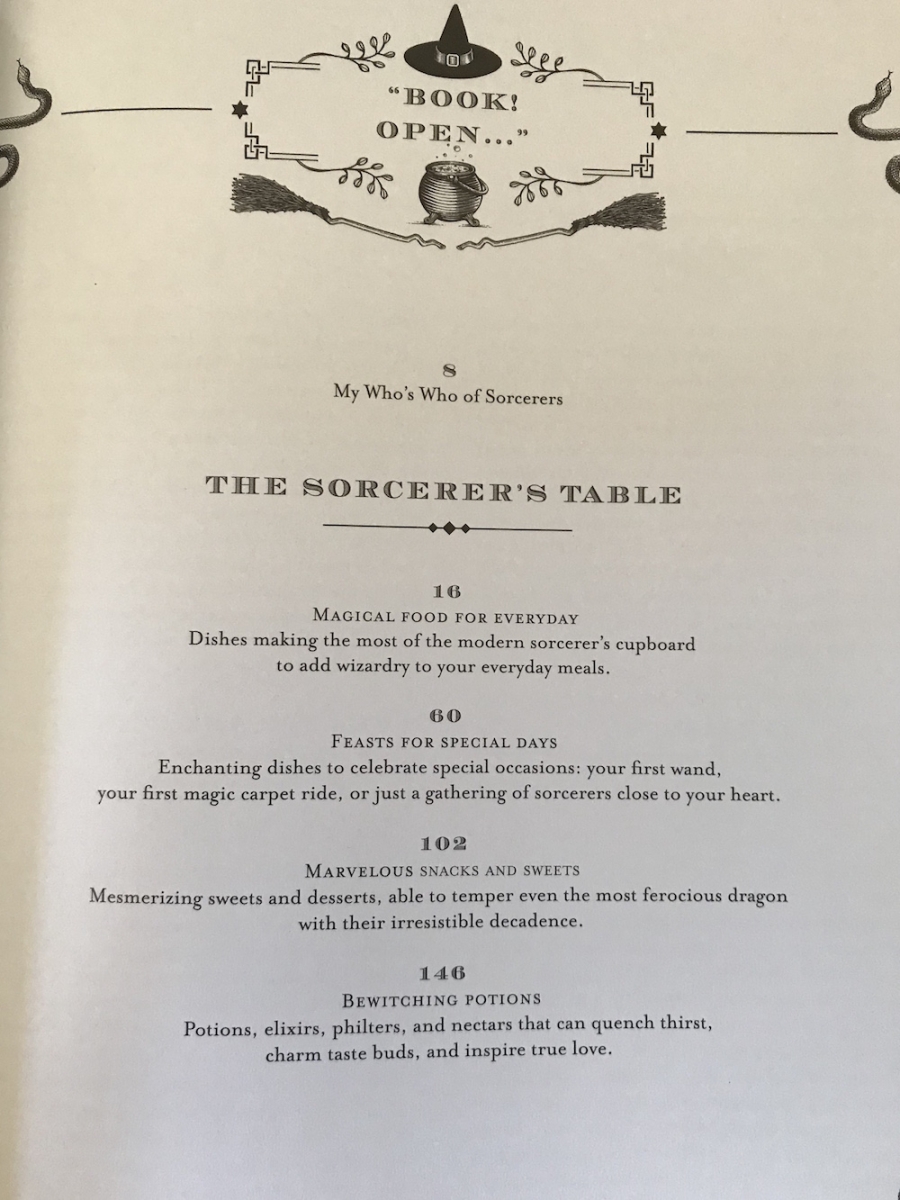 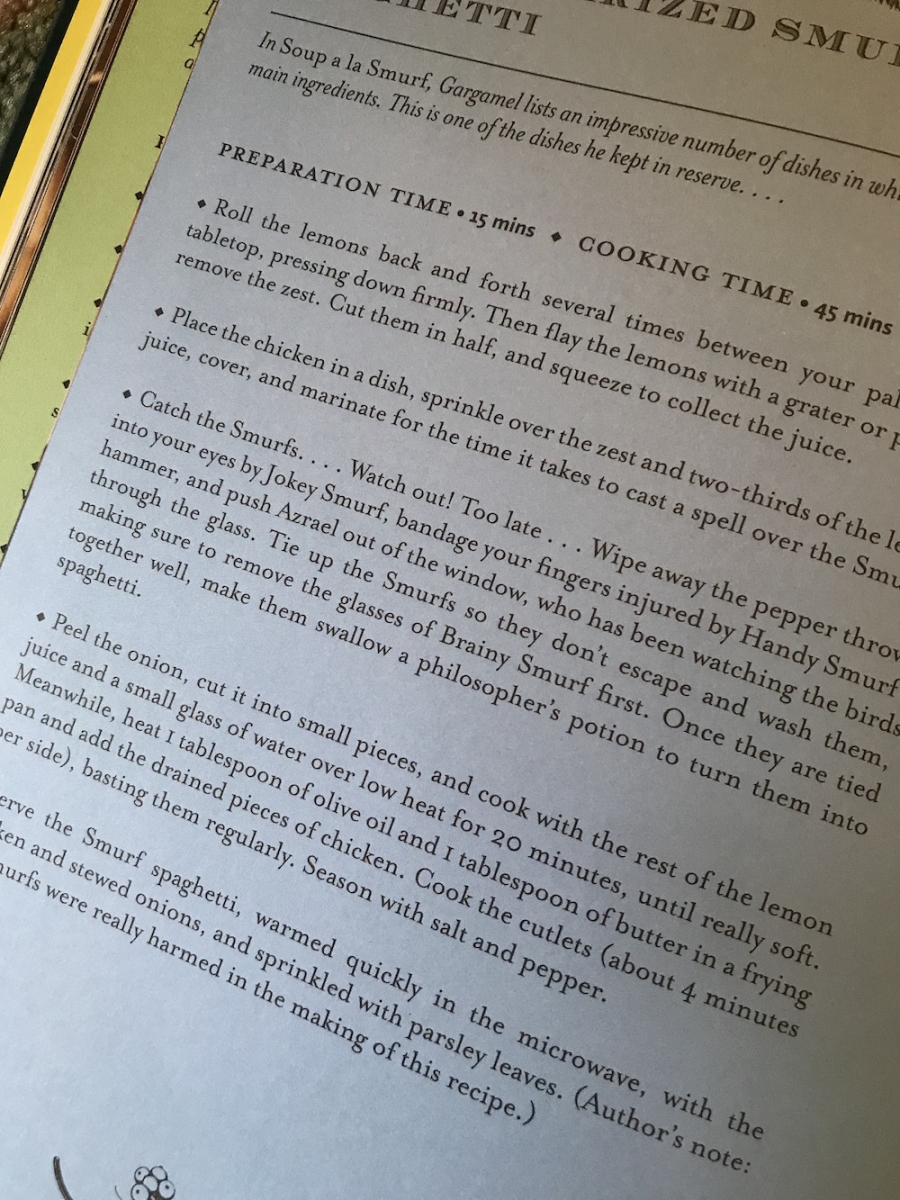 Sadly, one of the two recipes I made from this book did not turn very well, so I can’t give an unmixed review. I believe it was called “Witches’ Brew,” and was basically a potato-zucchini soup topped with tapioca pearls boiled in tomato juice. The overall effect was frog spawn resting on top of a green potion, which was pretty awesome and tasty the first day, if not ideal for leftovers. It could just be my lack of experience with tapioca and my foolish decision to boil them in V8 rather than straight tomato juice. Who knows? 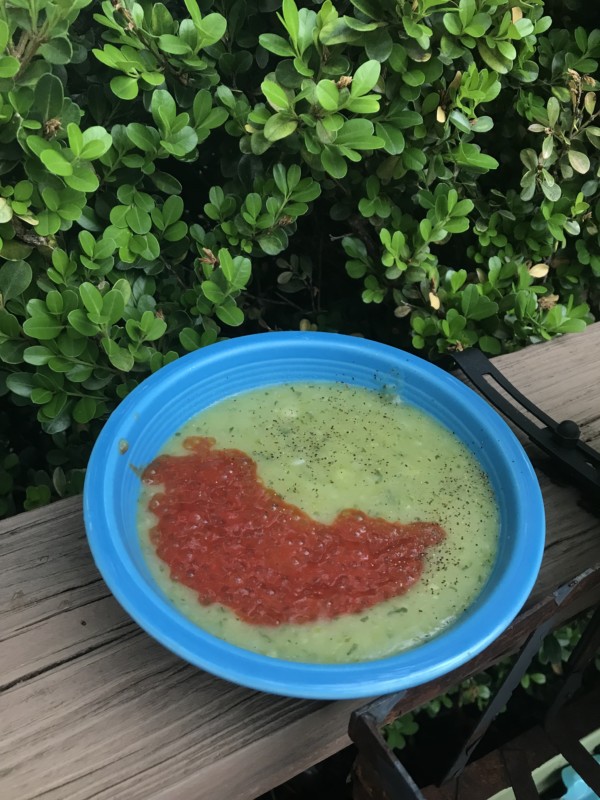 The other recipe I made from this book I don’t remember the name of, sorry! But it was basically apple slice sandwiches, with whole-grain mustard, smoked ham and brie in the middle. Simple, different and delicious. Try it! You probably don’t even need a recipe. Just make sure to slice the apples thinly! 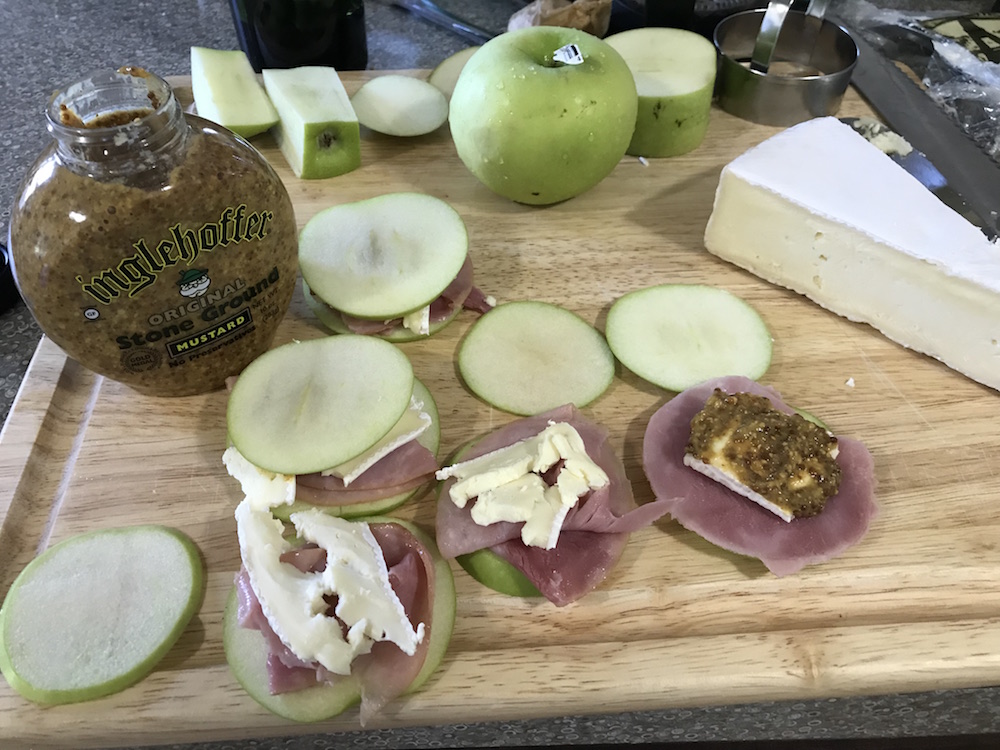 The Elder Scrolls: The Official Cookbook

When I came across “The Elder Scrolls: The Official Cookbook” in the course of my browsing, I realized that this would make a perfect birthday gift for my brother! 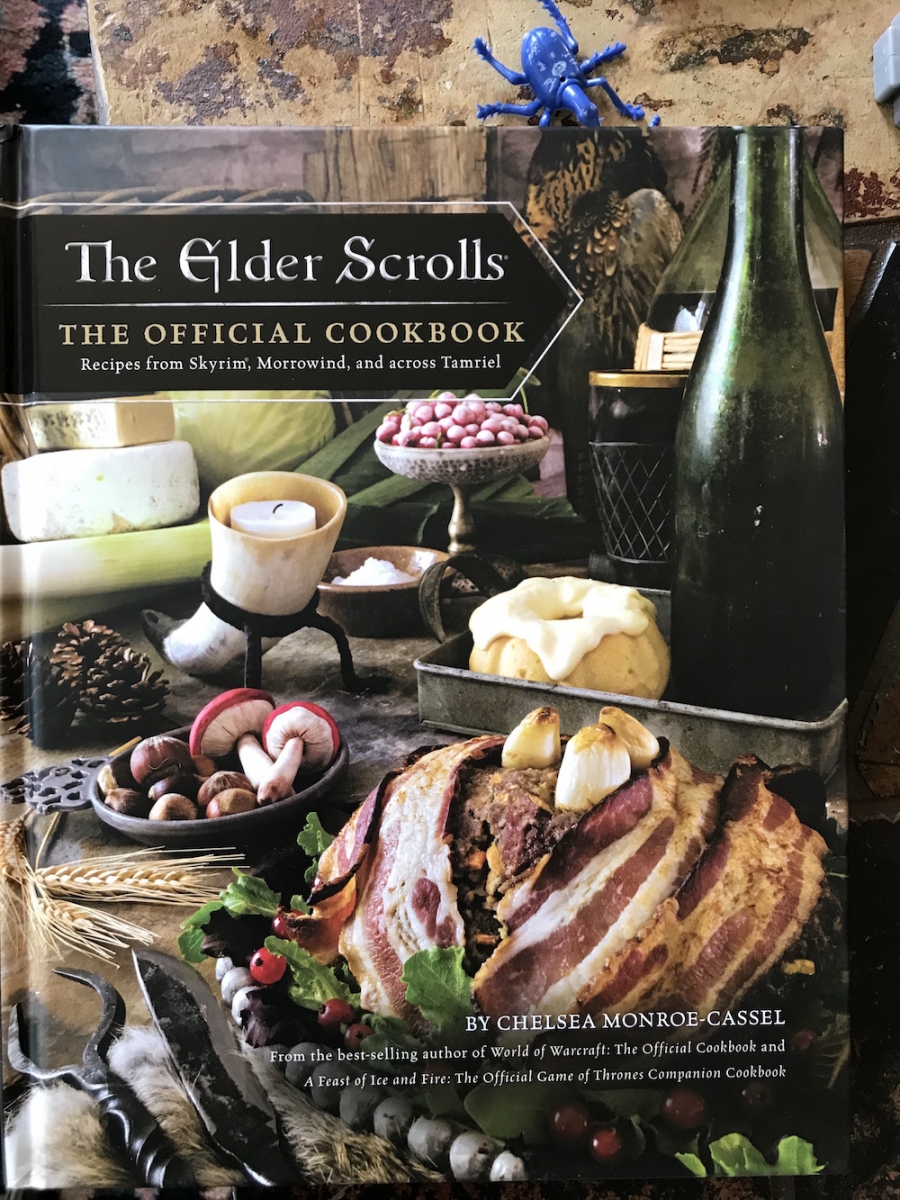 As you can see from the cover, there are also a “World of Warcraft” and “Game of Thrones” cookbook by the same author.

I’ve only made one recipe from this book, and it was both expensive and time-consuming–but delicious: Seared Nordic Barnacles (aka Scallops with bacon and buttery juniper-berry sauce. 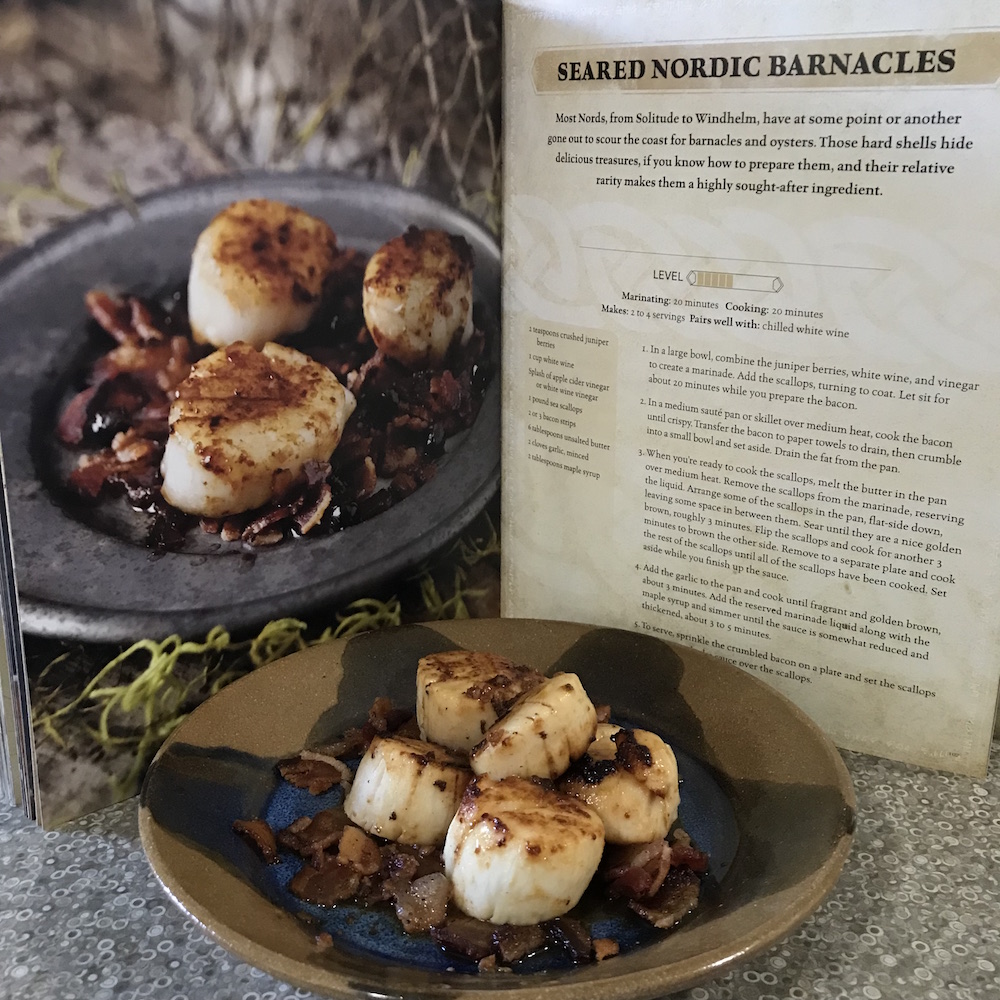 “The Elder Scrolls” cookbook has a large variety of recipes, from baked goods (cheese scones, cabbage biscuits, etc.) to Soups and Stews (coastal clam chowder, etc.) to Main Courses (Festival Hand Pies, Baked White River Salmon…) to Desserts (Honey Pudding, Sheogorath’s Strawberry Tarts, Snowberry Crostata) and Drinks (Spiced Warm Milk with Honey, Black-Briar Mead, etc.). There’s some comfort food to more challenging/fancy items, such as the scallops above. All in all, though I’ve yet to try more than one recipe, I’m pretty impressed by this book, even without knowing much about the game it’s based on (although I have watched both my brother and Daniel play it, and have a very favorable impression).

But my absolute favorite purchase from this Amazon binge was “A Literary Tea Party: Blends and Treats for Alice, Bilbo, Dorothy, Jo, and Book-Lovers Everywhere.” If you read TulsaKids’ June 2019 magazine, you probably saw Natalie Mikles’ article on “Tea Party Treats.” If this article has inspired you to incorporate more tea parties into your life, then maybe make “A Literary Tea Party” your next stop! 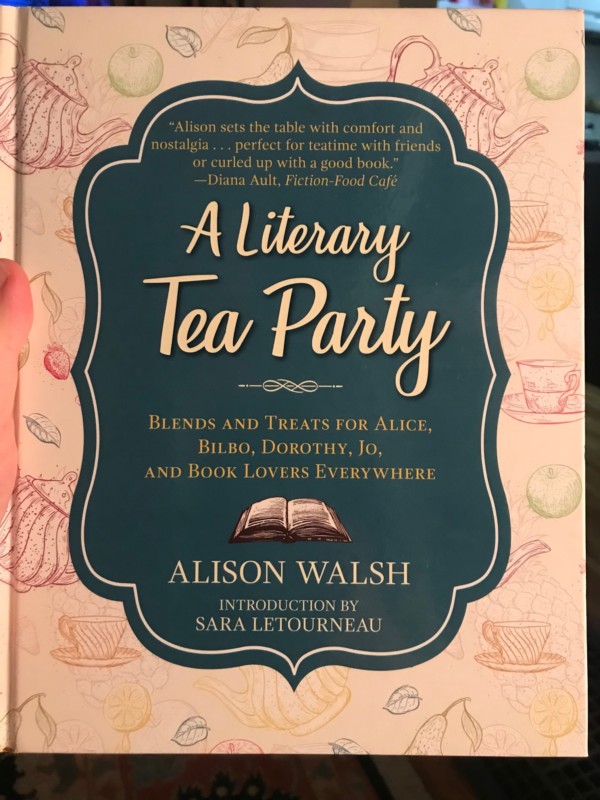 I don’t know if Tulsa has a good loose-leaf tea purveyor; if you know of one, then this book is even richer because the last section of the book is recipes for special tea blends you can make to go along with your literary-inspired foods. Which sounds wonderful, I just don’t know where to go shopping for cream tea, etc.!

An easy recipe to begin with is “Mr. and Mrs. Beaver’s Ham Sandwiches”–inspired, of course, by “The Lion, The Witch and The Wardrobe!” 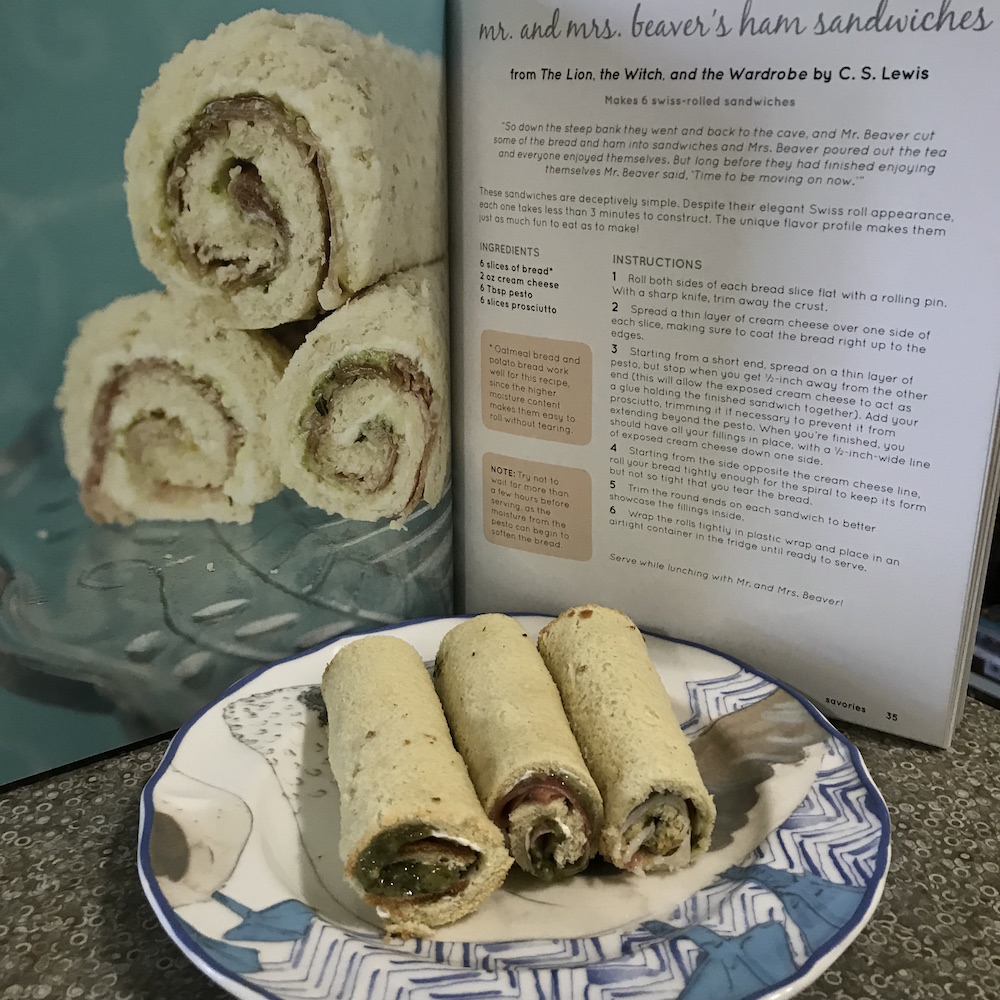 I love the pinwheel effect of these sandwiches, which you get by rolling out the bread prior to filling–I think I rolled a little too vigorously because they were a bit “gluey” in the mouth–and you can tell that my sandwiches are more close-textured than the ones in the picture.

For these sandwiches, all you have to do is take a piece of bread (oat or potato is recommended, I believe), roll it out (gently!), then spread with a thin layer of cream cheese, leaving a “naked” edge at one end. Top with pesto and prosciutto (expensive! I’m sure ham would work), then roll into a cylinder! Voila! 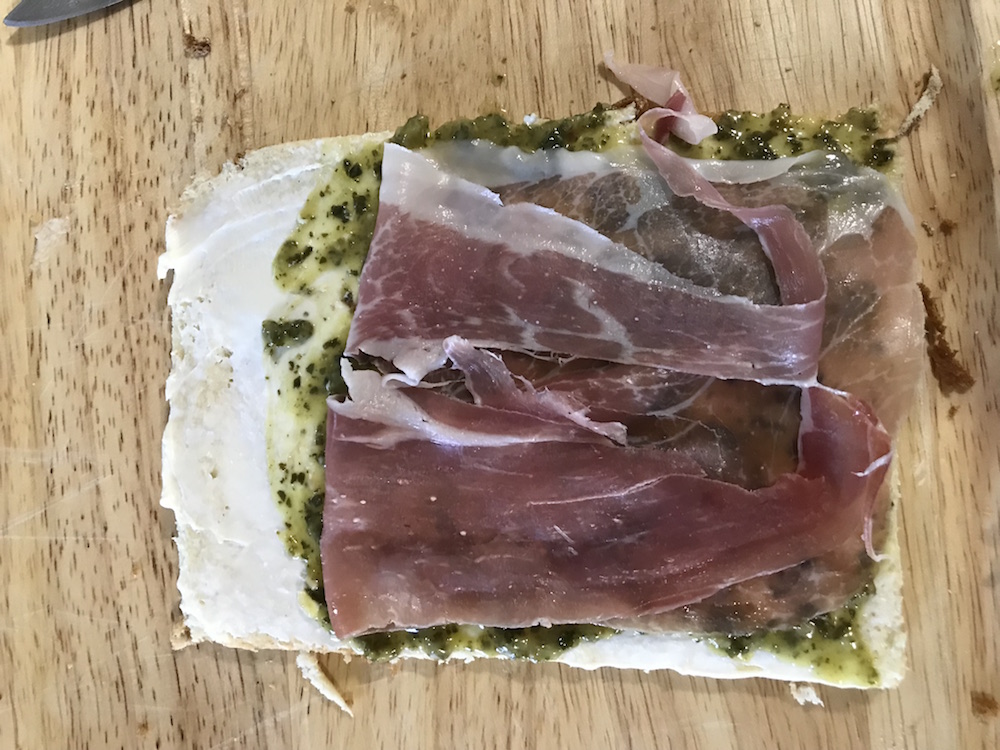 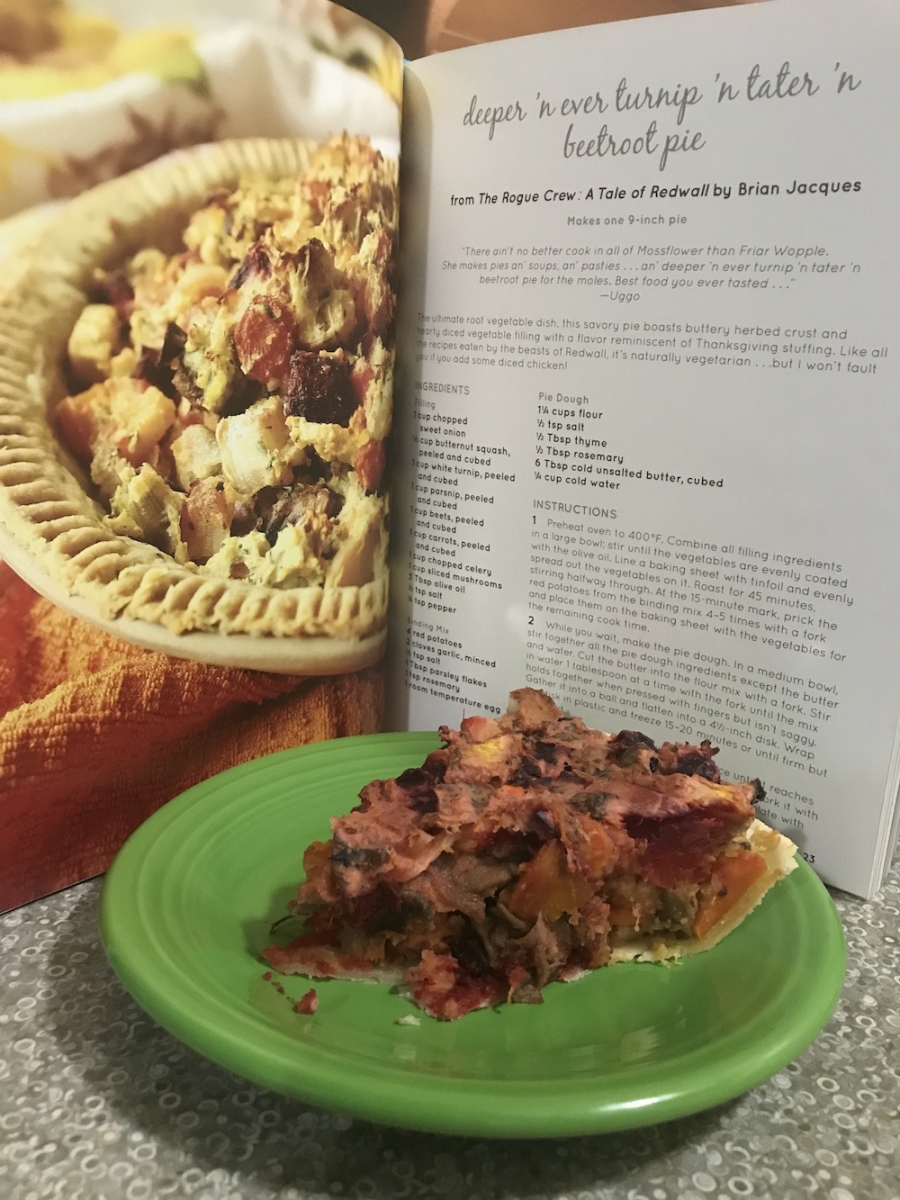 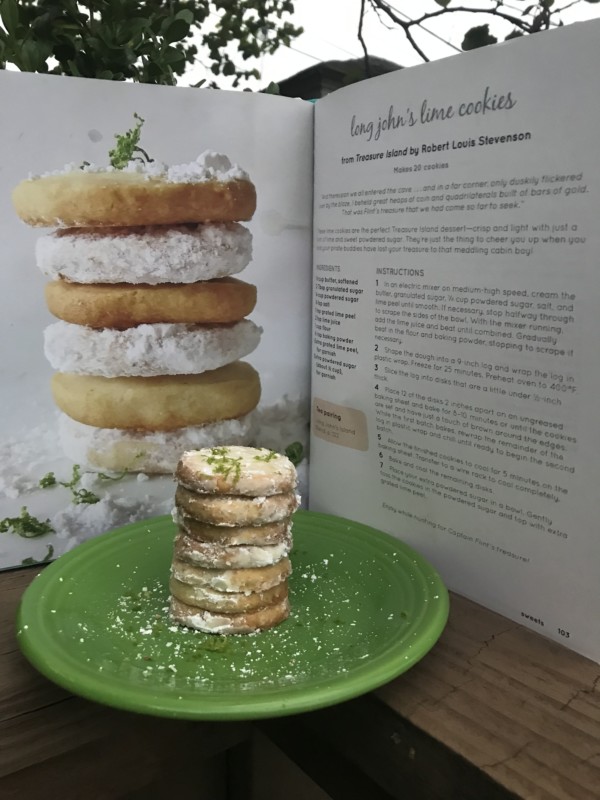 …and London Fog Lattes, inspired by Sherlock Holmes! (There is a chapter at the back with beverage recipes for non-tea drinkers.) 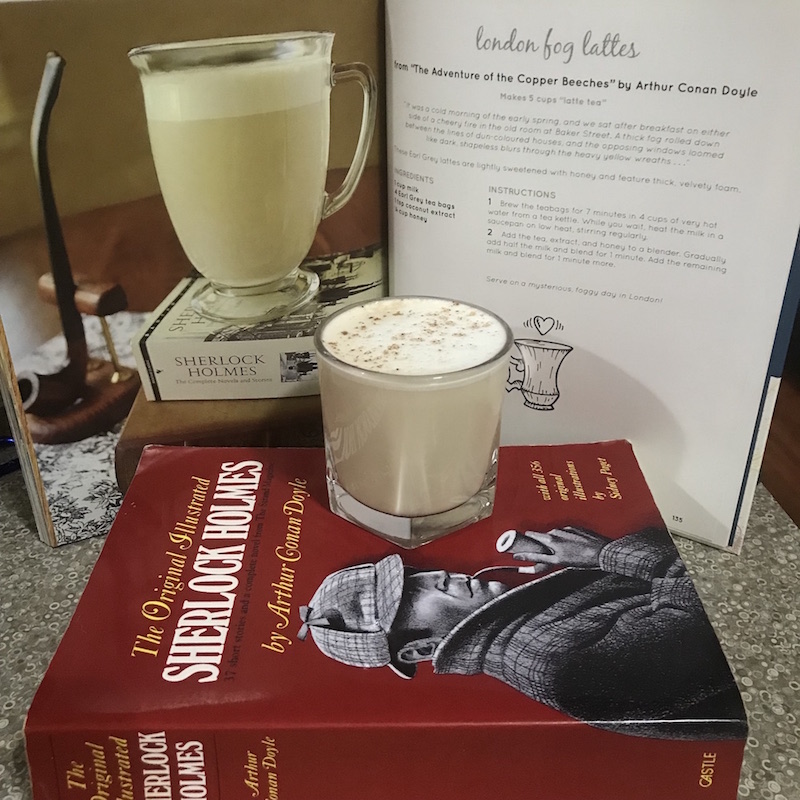 This delicious drink uses Earl Grey tea, hot water, heated milk, coconut extract and honey. The recipe in the book makes 5 cups, so I just estimated. If you make one of these and drink it while reading Sherlock Holmes, let me know becuase it would make me so happy! 🙂

Every recipe I’ve made from this book has been pretty easy and has tasted fantastic. And it’s just such a comforting combination…delicious food and your favorite childhood books!

Do you have any favorite literary cookbooks? Feel free to share in the comments! 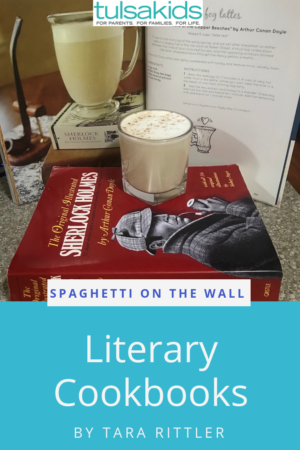