Life May Not Be What You Envision

(But it can be good)

At 26, professional rock climber Justin Salas possesses an impressive resume. With championship performances at competitions in both the US and abroad, this Tulsan is making a name for himself in one of the fastest growing sports in the country. Without a doubt, his athletic achievements are formidable, but they don’t compare to his personal ones. Not only has he accomplished all of this in a relatively short amount of time, he’s done it with significantly impaired vision. For all intents and purposes, Justin is blind.

At 14, Justin began to notice his eyesight was deteriorating, and in a very short period of time, he had lost most of his vision. While doctors struggled to make a diagnosis – eventually landing on “optic neuropathy of unknown cause” – Justin was left with a blank spot in the center of his visual field and very limited peripheral vision. The active teenager who loved to ride BMX bikes and play soccer found his life had changed dramatically in a few months’ time.

Although it wasn’t always an easy journey, Salas learned to adapt. While some aspects of his life remained the same – according to Justin, he was still required to keep up with his studies and do his chores around the house – others required a completely new approach.

“I think back to when I was first losing my vision. I continued riding bikes,” Justin recalls. “There was a BMX rider that I looked up to back in the day, and something he said just kind of stuck with me. He said, ‘You know, if you think you can do something, just go do something. Why talk about it when you can actually go do it? Just try it, and see how it goes. If you don’t try it, you’ll never know.’”

When a friend who worked at a local climbing gym reminded Justin that he didn’t need to be able to see in order to climb, Justin gave the sport a try. He was hooked immediately and began to spend significant time in what was then New Heights Climbing Gym. It was there that he met fellow climber Matt Frederick. The two struck up a friendship, working as a team to conquer indoor and outdoor climbs, with Matt acting as Justin’s sight guide, calling out the holds and helping Justin memorize the climbs.

What started out as recreation turned into competitive climbing after another climber told Justin about adaptive paraclimbing competitions. Justin and Matt headed to Salt Lake City to test their skills, and Justin scored second place in his first national competition. Since that time, Justin has won gold medals in two USA Climbing Adaptive National Championships and a silver medal in the first International Federation of Sport Climbing Paraclimbing World Cup in Edinburgh, Scotland, in 2017. Last fall, he competed in the 2018 Paraclimbing World Championships in Innsbruck, Austria, landing an IFSC gold medal. He’s also the first adaptive rock climber to achieve the grade of V11.

Justin and Matt’s friendship is a powerful one that has had a significant impact on both of their lives.

“When you’re climbing outside, things are, for lack of a better word, a lot more life or death,” Justin notes. “If you don’t trust the guys who are keeping you safe while you’re climbing, then that relationship is not going to be the same. It does get rather intense sometimes. Matt and I have had our differences, and we’ve had to air them out and take breaks from each other, but he’s still my best friend. The relationship has been all over the place, but I wouldn’t want to do this with any other person.”

Justin has unexpectedly found himself on the cutting edge of a relatively new sport – adaptive climbing. Sport climbing will make its Olympic debut in Tokyo in 2020, with speed climbing, bouldering and lead climbing. It should follow as a Paralympic event in 2024. He’s become an advocate for the sport at the same time as his own career as a climber has taken off.

All of these new opportunities have also required Justin to gain an entirely new set of skills. He’s had to learn to negotiate contracts, land sponsorships, and raise money for travel and competition. To accomplish this, Justin uses accessibility software on his computer and phone. His mom, girlfriend and climbing buddies have all proved to be invaluable resources, too, as he’s navigated the business end of the sport.

“Before I lost my vision when I was 14, I had all of these thoughts about what I was going to do when I was in my early 20s,” Justin recalls. “I wanted to be moved out of the house and do all of these different things, and then life didn’t necessarily play out the way I thought it was going to. All I want to be in life is independent and to support myself financially. In that process, climbing ended up becoming that for me. Paraclimbing, it’s a brand new thing, so it’s kind of like a perfect storm in a way.”

While Justin doesn’t feel pressure from the outside world, he does put some on himself.

“I want to perform, to show the world that paraclimbing is a very real thing. It’s here to stay,” he says.

For now, Justin’s days are filled with work, training, travel and competition. While it’s not exactly the future he envisioned for himself at 14, it’s a full life, and one he loves.

“Expect the unexpected,” he muses. “Life has a funny way of going in different directions you never thought possible. Just because things don’t play out the way you think they’re going to doesn’t mean that it’s not going to be a good destination at the end of the road. You know, we’re all just trying to figure this out. I think life is a trip. It’s interesting. It’s dynamic, not static.”

For more information on Justin Salas, visit his website at justinsalas.com. 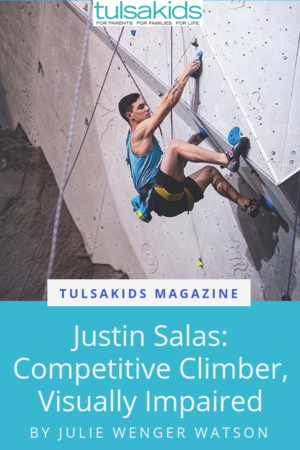