One of the saving graces in my life as a mother to a toddler was taking my rosy-cheeked, bright-eyed tiny human to the children’s section of a nearby library and turning her loose while I visited with a friend. I talked about how my daughter suddenly refused to eat bananas after a month-long fascination with everyone’s favorite fruit. My friend talked about her child’s seemingly psychic powers, always waking up 30 minutes earlier on days her mother had planned to get up to have some time to herself. It saved our sanity to have an adult conversation, and our girls generally played peaceably, first independently and gradually in conjunction with other children.

My background as an early childhood educator told me that this progression in play was normal and healthy, so I understood that my daughter’s interest in playing with familiar partners in predictable ways was how she felt safe to collaborate and take small risks, learning how to play with others one interaction at a time. I knew in my head that my notions of fairness, inclusion and equity were lofty and foreign to her, but sometimes, the inner voice of experience and study is slower to speak than others.

I spent many days in that space, my back to the sunny window, as I watched the small citizens of Tulsa ramble around and gnaw on educational materials. The other parents and I would sip hot beverages from travel mugs and lean on comically large diaper bags, trusting one another as travelers through this strange, humorous and rather inglorious stage of parenthood.

It was one of these unremarkable days that I experienced something I will never forget. A mother walked in with two children close in age to my daughter and took a seat as her children surveyed the room, selecting their playspace. The older sister took her brother’s hand and led him carefully toward my daughter and her friend, who were sitting at a small computer. As I took a sip of my hot tea and smiled, proud that this pair had seen my girl and thought her a good play partner, I suddenly heard my child’s voice ringing out for all to hear: “You’re not my friend!” Her tone was loud and firm, her feelings clear. She stood, took her friend’s hand and walked away, leaving the brother and sister stunned.

My heart raced. My stomach twisted into knots. I scanned the room and saw countless adult eyeballs looking first at the golden-haired child responsible for this outburst, then to me. I quickly cursed my child’s resemblance to me as she walked over, taking her water bottle from my diaper bag and letting all the world officially know who was responsible for her. I wanted the earth to swallow me up. My thoughts spiraled even darker as I realized that my concern was not “What does this mean about my daughter?” but “What do all these people think of me?!”

The voice of reason, of course, would have told me that this was not a sign of deep, incurable malignancy or ill-manner in my child. It would have told me that a 2-year-old child, even a very verbal and friendly one, can be impulsive, self-focused and inflexible in welcoming new play partners. The rational voice would have reminded me that child development is a predictable, impersonal process, not a product of a parents’ intentions, sacrifices or goodness. But that voice was slow to speak, drowned out by another.

The voice of Mom Guilt, rash and judgmental, was one I’d heard many times. It came when I told my daughter I was too tired to play with her, when I served her cheese sticks and chopped up hot dogs for dinner. Mom Guilt reminded me that those twisted car seat straps could have been lethal and that insisting my daughter choose only three strange household objects to sleep with would likely lead her down a road to intense therapy and possibly a career as a supervillain.

That day, Mom Guilt told me that everyone in that library saw my failures and my shortcomings. Everyone there knew I was a bad mother and that my child was doomed. As these dark emotions wrote themselves on my face, my friend graciously put her hand on my arm and pulled me out of my head. I made eye contact with the other children’s mother and mouthed, “I’m sorry.” To my surprise, the woman shrugged and mouthed, “It’s okay.” Her children had happily resumed playing, sitting at the now-available computer. The world had continued its rotation, and my 15 seconds of infamy had passed.

I scooped up my daughter and gave her a squeeze. I breathed in her smallness, her newness on this earth. The voice of reason finally caught my ear as I connected with her, seeing her, not her behavior.

She nodded and pointed at my friend’s daughter. “She’s my friend.”

“I understand,” I said. “They could be friends, too. You don’t have to play with everyone, but please be kind.” I nodded at the children at the computer, and my daughter looked first to them then back at me.

She nodded with a solemn little face, processing before cheerfully shifting into her usual expression. “Can I go play?” I nodded and she hopped down, playing with her friend uneventfully until we left a short while later. As the voice of Mom Guilt crept into my head, speaking foreboding warnings of lectures not given and the failing of morality, the voice of reason held my hand and let me see her with a more fitting perspective.

As I introduce myself to you as the new columnist for Tulsa Kids’ Babies & Toddler column, I’d like to affirm for you now that I am many things, but I am not a bad parent. And neither, my friend, are you. When your inner voice is one of guilt, I hope you remember that. 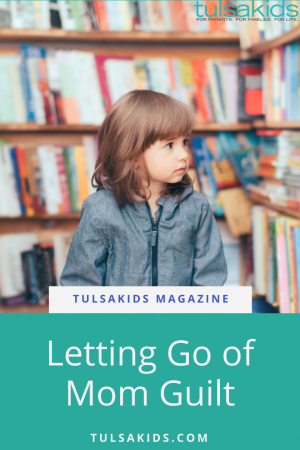