Let’s Toss Out the R-Word

Throw it Right in the Trash With Your Yanny-Laurel Memes

Noah is in a new school this year. TL;DR but life changes happened, good ones where Justin and I both have amazing new jobs and are finally on the path to the road to the highway out of poverty.

Back in April, I wrote about how I was on the path to giving up my career in education after the Oklahoma Teacher Walkout. I meant it. Opportunity knocked, and I deuced out like an anthropomorphic blue hedgehog.

Noah had an a.ma.zing team over at Grove Elementary School the past two years.

But the kids going to school at Union was tied to my job there, which meant taking a new job would also mean coming away from what we know and have come to rely on.

Change is scary, especially when autism is one of the components. But here we are, new school, brand new vibes.

One of the things I most admired about Grove was how great of a job Noah’s teachers did advocating for him with the other students and talking about what autism meant. Many of the other kids became allies. They understood his accommodations; many of them understood a meltdown wasn’t necessarily something he could help.

Now he’s in a new environment, and we kind of have to start over with all of that…and it’s going to be a tough one.

The first day I picked up the kids, one of the girls in Noah’s class, a pretty girl almost as tall as me, looked at me and said, “Is that your son?”

“You need to talk to your kid. He’s over here telling everyone his business.”

A buzz of panic ran through me as I recalled the time Noah took something really personal from my underwear drawer to school in his backpack and told the principal he bought it in the Christmas shop.

It was a really personal item, friends.

The girl continued: “He’s over here telling everyone he has autism.”

I smiled. “He does have autism. It’s not a bad thing. That’s cool that he’s talking about it. Would you like to know more?”

She would not, apparently.

On the way home, Noah told me kids weren’t responding very well to him. The R-word was mentioned, heavily. You know the word. It sounds like “regarded” and was thrown around casually by most xennials back in middle school before we learned it really isn’t cool to use language meant to demoralize or denigrate disabled people.

By yesterday, he was stimming so hard he was constantly touching his neck and stuttering, and my worry was deep. I had already been called by the school twice, and once I was asked to come up. “He’s escalating,” I told his teacher. “I’m concerned he’s going to have a meltdown.”

“He’s in a new school,” Justin wisely reminded me. “This is gonna happen.”

Arthur, who is perennially mellow and fair-minded, had told me, “Oh, they’re using the R-word. Like…a lot.”

The Power of a Word

I took to the Internet for a little Facebook escapism. Something light to help my mind drift and come up with answers…George Takei will save the day!

And there it was in his comments, this horrible back and forth between people who didn’t agree with each other…adults calling each other variants of the R-word–”libt***” and “Trumpt***.” I swear this was on a completely non-political thread.

It was as if that word was just there within reach so easily that they just snatched it up and tossed it onto their comments. The conversations invariably would deteriorate into cries that the others were each “fragile snowflakes” if they couldn’t handle a light hate speech.

How can I expect kids to know better when the adults of the world are modeling language of hatred and fear, then challenging each other as fragile when they refuse to tolerate hate speech?

Now I know what you’re thinking. Those people represent the extreme side of things. Most people are not that way.

But I don’t think so. I think it’s like anything else–race, gender, LGBTQ issues–most people do not realize they are exhibiting unconscious bias toward disabled individuals.

In using that kind of language casually, they embolden and enable the true bigots of the world and perpetuate language and constructs of hatred in the next generations.

I mean heck, I used to use this word, so I know it’s used by people who really aren’t aware of what they are doing by using it. It took me having a kid on the spectrum to feel ashamed of myself for it and correct my behavior.

So to confirm my theory, I took a gulp and a deep breath and typed the R-word into my Facebook search. I wanted to see how many people I love and respect use that word.

As it turns out, a lot of educated people I totally respect use that word:

I think to fix the things that need fixing in this world, we have to stop living in a world of extremes. You can realize a word is wrong and should be treated as hate speech but also realize the people who use it don’t necessarily mean it as such. That doesn’t mean you should give it a pass, and it doesn’t mean they’re bad people.

I mean, let’s be honest. Some things are just better left in the past. See: my bangs from the mid- to late-eighties.

Toss in it the Garbage Can

The R-word is definitely on the decline, although slowly. One study showed a four percent drop in use among teens over a nine-year period. However, the number of people who use the R-word is still shockingly high.

It doesn’t mean we are bad people. It just means it’s time for a change.

It also means we need to admit we have made mistakes and own up to them. I am sorry every day for anyone I ever hurt using the R-word. I look at my son and it eats me up that I could throw around such a careless word.

If you’re thinking about throwing out the R-word in the same garbage can you tossed your low-rise flare jeans, here are a few things you can do:

I’m not going to pretend like I’m an expert, and I’m certainly not qualified to speak on behalf of a group of people with intellectual and cognitive differences I don’t personally experience. But I am a mom with an amazing, gifted son who needs a lot of help getting by in the world, and he isn’t really able yet to advocate for himself, which means if I don’t, no one will.

So here I am pleading with you. Parents and teachers, humans of the Coffee Nebula, let’s raise better people than we were.

I’d love to hear about your journey with language you have decided will have no place in the world of smartphones, jetpacks, and genetically-engineered dinosaurs. Give me a shout in the comments and let’s hash it out.

Love to you all. 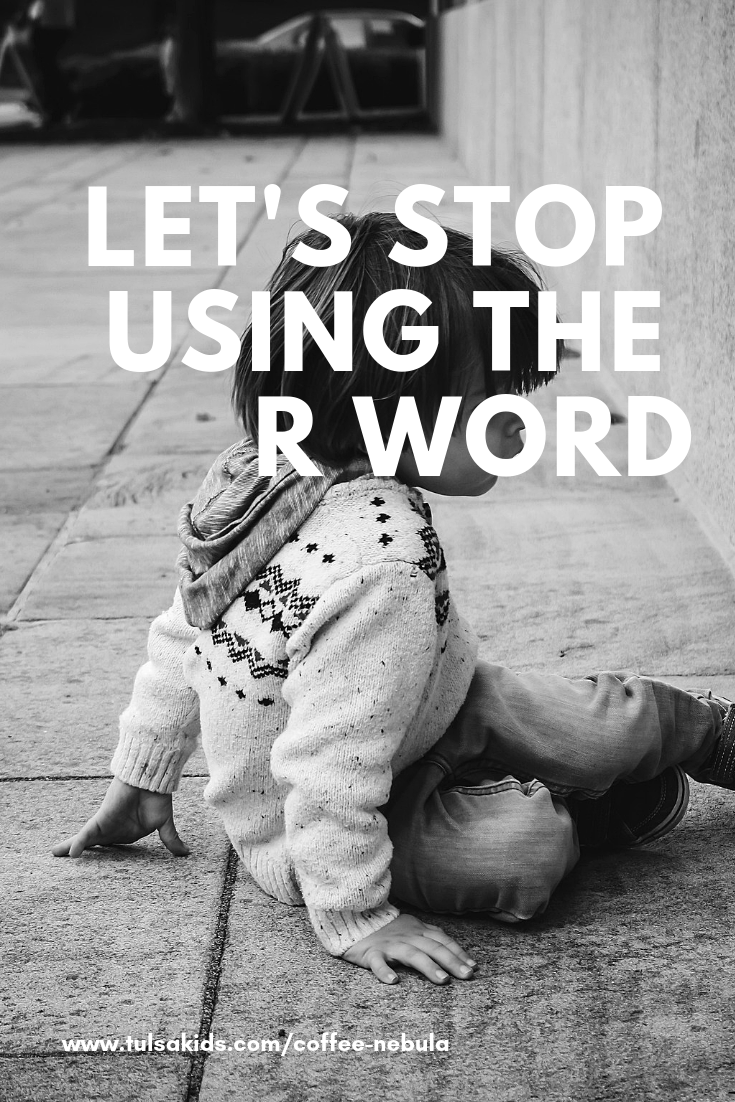