Despite a back injury and surgery, Ferguson continues riding, training and competing.

Two years ago, a horse named Yoshi was headed to a kids’ trail-riding camp. The horse met a girl named Kit, and together they became every equestrian’s dream. But every fairytale has adversity. One year ago, during her junior year at Holland Hall, Kit Ferguson had back surgery and didn’t know if she would be able to ride again. Kit has had quite a journey to overcome many obstacles to get to where she is today.

TK: How did you start riding?

Kit: I started riding when I was 4 years old at Southern Hills Riding Academy riding camp in the summer, and I absolutely loved riding and taking care of the horses. I then convinced my parents that I wanted to start taking lessons. My parents leased a horse for me for my Christmas present when I was 9, and four months later I owned my first horse, who led me to start my show career.

Kit: I started competing when we bought my first horse, Bridget, when I was 9 years old. The equestrian sport I compete in is called Three Day Eventing. It is an equestrian triathlon and consists of three phases that include Dressage, Show Jumping and Cross Country. Once I saw a horse run the cross-country course, I knew I wanted to compete.

I have been competing for seven years and have slowly moved up the levels. I have always been involved in sports and have a competitive nature, but horseback riding gave me challenges that I couldn’t find in soccer or volleyball. Forming a partnership and getting my horse to trust me, allowing me to win competitions, was more satisfying than making a goal in a game. I ended up loving competing so much that I gave up all my other sports to focus on my riding 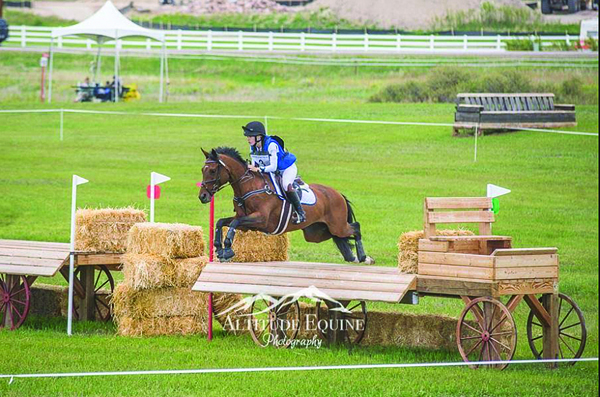 TK: What awards have you won?

Kit: My biggest wins have been the following: I won first place in June at the Colorado Horse Park International CCI 1*;

TK: What are you currently competing in?

Kit: I am currently competing at the NAJYRC in Montana this week. I am riding my horse Yoshi, a 19-year-old Holsteiner mare. We got Yoshi two years ago when I went to Midland, Texas, to look at another horse. Yoshi’s owner was going to college and her family was moving. Yoshi was originally being donated to a children’s trail-riding camp because her family could no longer care for her. Her trainer was looking for a home for her where she could continue jumping. I fell in love with her the moment I saw her. My dad made arrangements for us to give her a home and, before I knew it, she was headed to Tulsa.

TK: What was the reason behind your surgery?

Kit: Two summers ago I injured my back. I tried to ride but it was too painful. I was diagnosed with a herniated disc and took the year off from riding. During that time, I did intensive physical therapy and had steroid injections to relieve the pain. I was pretty young and didn’t want to have back surgery. Towards the end of the school year, I was in a lot of pain and dragging my foot when I walked. It was very difficult to sit through classes. My physician, Dr. Kasra Ahmadina, was trained to perform a minimally invasive microdiscectomy. He said this procedure generally has a very high success rate. Since my pain was affecting my everyday activities, I finally decided to have the surgery the day after school one year ago. When I woke up from the surgery, I was no longer feeling any serious pain. It was a great relief. I had been told by another physician that I would just have to give up horseback riding, but [by having the procedure], I just had to go through a recovery period and then ease back in to riding. I started riding again last fall and was competing by January of 2017.

TK: What competitions are you currently preparing for?

Kit: Since Yoshi is 19-years-old, the NAJYRC will probably be her last big competition. I have a new horse. He is a Salle France Thoroughbred cross 8-year-old gelding named Gus. We hope to make the NAJYRC team next year.

Kit: I have to say that my current trainers are an inspiration. I train with Kadi Eykamp in Fort Worth, Texas. Kadi is from Australia, where she was a very high-level competitor. She is an amazing trainer and has helped me considerably, especially with my dressage. I would not have made the NAJYRC team without her.

I train locally with Joey Brumbaugh at Free Flight Farm. Joey is an extremely experienced rider and has helped me really improve my jumping. He is very detailed, and at the same time, is very positive.

Will Faudree is the coach for our NAJYRC team. He is a former NAJYRC team member and currently has a horse farm in North Carolina. He was also an alternate on the U.S. Olympic Team. From the day we met, our personalities just clicked, and he has a way of bringing out the best in Yoshi and me.

All three of these individuals have achieved so much with their riding careers, and at the same time, chosen to take time to train others who love the sport.

TK: What are your plans for the future?

Kit: My plans for the immediate future are to continue riding my new horse, Gus. Our goal is to make the team next year at the one star level. Gus is very talented, and I hope to move him up the ranks and compete at the two star level. I also hope to bred Yoshi and train her foal. I love horseback riding and want to ride and train as many horses as possible. I am working on my education as well. I want to attend college on the East Coast and ride on a collegiate equestrian team.

Kit: I am a city girl and so are my parents, but because of my love of horses, my family now has a small farm where we keep my horses. We also have two miniature donkeys, a llama, a miniature horse, three sheep, two potbelly pigs, a rabbit, and an assortment of barn cats. My mom has gone from shopping at Utica Square to shopping at Tractor Supply!