Nearby Kansas City is a long-time favorite travel destination of mine. Offering an abundance of history and spectacular area attractions, this cosmopolitan city provides a vast choice for all ages and interests—-without too much lead time needed for Tulsans.

A mere four-hour drive from T-town, Kansas City, also known as the “City of Fountains” since it boasts more fountains than Rome, is a major metropolis with European-style architecture, magnificent museums, professional sports, theme parks and world-class shopping and dining.

Southern Living magazine described Kansas City as, “upscale, downtown and affordable” and as a place “where you can stay in the lap of luxury without paying through the nose.” I love that Kansas City couples large city offerings with the charm that is typically found in a smaller town.

Unique neighborhoods such as Westport, which has an eclectic mix of cafes and shops, the 18th & Vine District, home to The American Jazz Museum, and the refurbished downtown area provides visitors with enormous choice and variety. It’s a cinch to get around by car. So, if you want to spend part of your day sightseeing and then dine downtown, it’s no problem.

Treats and Eats at “The Plaza”

Put on your walking shoes and stroll along picturesque Country Club Plaza. One of the prettiest and the oldest shopping districts in the country offers visitors a slew of choices with its wide array of retail establishments, including not-to-be-missed Hall’s department store as well as numerous eateries and restaurants.

All are housed in stunning Spanish architectural-style buildings, modeled after those found in Seville, Spain. Check out the many murals and art displays sprinkled throughout!

“Out of This World” Outside

Amusement-park addicts can get their fix at Worlds of Fun/Oceans of Fun, two family theme parks, situated amidst 235 sprawling acres. At Worlds of Fun, experience some of the more than 50 rides and attractions including the infamous Mamba–one of the tallest, longest and fastest coasters in the world or its new inverted coaster called Patriot.

Beat the heat at some indoor creativity-stirring explorations including: 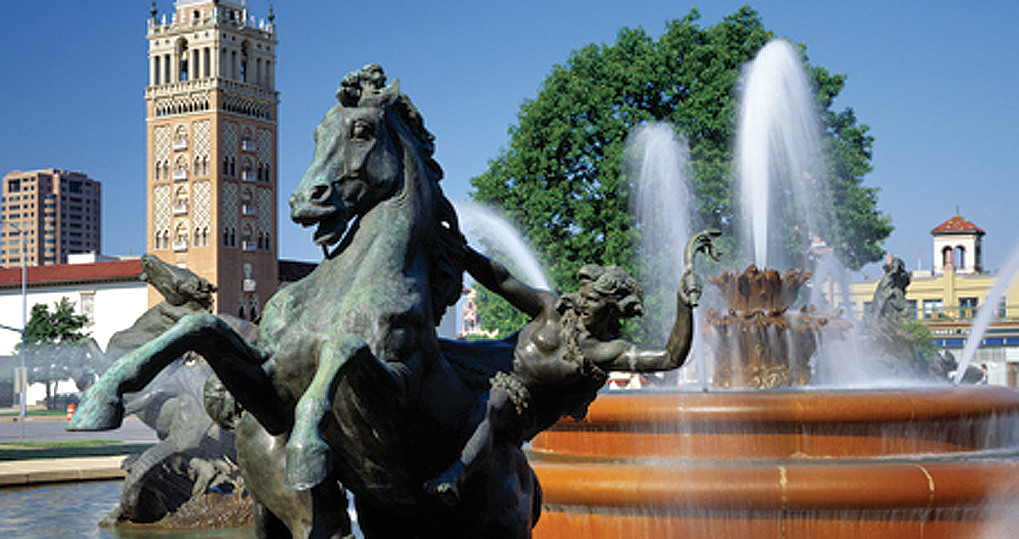 Kansas City is renowned for its famous barbeque and succulent Kansas City strip steaks. In addition to the already-mentioned Gates, another popular barbeque restaurant is:

With all of this to offer, you must now understand why I am such a fan of Kansas City. Explore this nearby city with your family! With all the many options at one’s fingertips, the only drawback is trying squeezing it all into one trip. But, thanks to its convenient location, it’s easy to revisit Kansas City time and again.

For further information about all the many points of interest, simply visit kcchamber.com or visitkc.com where you can find the DiscoverKC Pass full of coupons and special offers.