Worth putting on pants for

This was a bit of an emotionally fraying week for those of us who work in high schools. I had been looking forward to a chance to check out Just Between Friends this past weekend, but by Friday, after a week of security lockdowns for just about every local high school in the south Tulsa metro, when I climbed into the minivan after work only to have my own children affix themselves to my backside like so many barnacles, I was not exactly sure if I was up for life’s more complicated activities, like getting out of bed and putting on pants.

Just as I was contemplating whether I could hypochondriac myself up an excuse to stay in Netflix…I mean, er, bed…I noticed two beautiful little words on the JBF media preview passes Tara Rittler had given me: “No children.”

“I just hate to do this…I’m sorry to stick you with the kids this afternoon, honey,” I told Justin over coffee, nearly choking on my dirty, evil lies. I stared into my Scooby Doo cup so as not to make eye contact and reveal the pulsing waves of joy at the possibility of two hours without being asked for a snack or told that it was his fault, no it was her fault, no he did it first. This alone-inside-my-own-mind-time was the universe’s reward for cleaning my children’s funk-encrusted bedrooms. After all, who’s gonna give me a medal? Certainly not these four slackers. They’re too busy fighting over who lost the X-Box remote.

“Don’t you need to eat something before you go?” he asked me, his husbandly thoughtfulness stabbing me in my betraying heart.

“Nope, I’m good,” I replied with urgency, stomach growling. I shoved a snack bag of Ritz Cheese Crackers into my giant mom bag. It’s like the mafia: if you don’t get out quickly, they will find ways to pull you back in. Stop to put on makeup and next thing you know, you’re moving furniture to find half a pair of shoes, gluing Barbie’s head back on, mediating whatever the crap drama occurred when the Pokemon VHS tape was found to no longer play.

You have to be decisive, quick. Take not a second for granted. The possibilities for interruptive tomfoolery are infinite and vast.

With every mile closer to the sale, Lucy could sense my urgency to leave, responding with her instinctive evolutionary defense, cuteness. She was pulling out all big stops singing  some super cute song from school about like cute puppies or freaking hugs. Don’t make eye contact, I told myself again, this time peering tenuously over my left shoulder into the back seat. She caught me with a gaze to put Puss-in-Boots outta biz forevs. Her eyes were like ⅓ the size of her head as she lilted, “Mommy, am I going with you?” like we didn’t already cover that three times.

Lucy lost a tooth last week on the playground in the most Lucy way possible, by faceplanting on the ground mid-play while checking out the Gathering Place preview (I don’t know if she met George Kaiser before or after she bled all over her shirt, but apparently he was super nice). They never found her tooth, but I’m convinced she ate it just because she felt like it because that’s such a Lucy thing to do. Now she talks like a cartoon character, possibly a baby otter or duck, and it will very probably slay your heart. 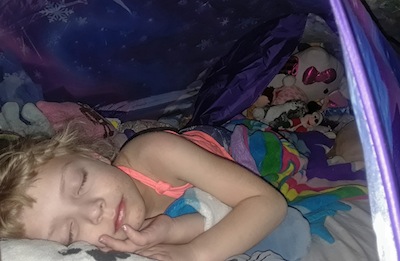 Do Lucies dream of cupcake sheep?

Somehow, by the grace of the gods, I made it out of that vehicle, nearly skipping with anticipation, dolla dolla bills heating up my pocket. The trade center was fairly unpeopled at that early hour, with wondrous imaginings as far as the eye could see. I danced into the room like Julie Andrews on a mountaintop.

I headed left first past a seemingly endless aisle of candy-colored dresses and beautiful girly things, but I was distracted by all the sparkly things hanging from the end of the rack. Ribbons in every bright color, opalescent beads, and pearly things, lovely lace headbands, leather cuffs, enough glam and bling to make Tamatoa even shinier.

I realize it sounds as if I have absolutely no impulse control, but I did put back the little hippie headband for Lucy. If by “put back” you mean it fell off of my cart while I was shopping and I wasn’t able to find it again.

So yeah, I probably have no impulse control.

But alas, I used my powers for good and not for evil. I picked up the cutest little locally crafted reversible pretty floral bonnets for ⅔ of the triplets my classroom teacher friend is expecting (their names are Ellie, Tillie, and Coop…swoon!). I also nabbed a super sweet black-and-Bailey’s-Irish-cream-colored plaid fedora for Arthur and a wool flat cap for Noah (it was worth it just to hear him say, “I’m a Brooklyn cabbie!”). I found three dreamy dresses in layered peach lace and citrus and blueberry floral for Lu, who loves perusing old copies of Vogue with me and whose fashion aesthetic is whimsical, bright, but edgy (Her favorite outfit is currently an oversized Five Nights at Freddy’s shirt with black heart cutout tights, black boots, and Harley Quinn pigtails). I started to pick out semi-matching Easter outfits for the guys since we’ve been all joiny and checking out All Souls lately, but I realized my retail decision-making centers had been overloaded when I kept picking up the same thing, carrying it around for several minutes, then replacing it on the rack.

By the time I reached the toys, my mind was swimming, awash in a frenzy of secondhand mayhem–an avalanche of various My Little Ponys, Hot Wheels for weeks, a galaxy of wild Ariels and Elsas and Tianas, a fleet of Thomas the Trains, a metropolis of Little People. Dollhouses of all sizes and shapes wedged onto a table formed a pastel plastic likeness of Amsterdam.

Over in household items, I picked up the weirdest little display shelf, perfect for housing around 50 of Lu’s Littlest Pet Shop toys, which is great if she ever decides to take a break from storing them on her floor among various Legos and old socks. I talked myself out of a huge actual framed Angry Birds painting, and I kept absently gravitating to the area rugs dreaming of an overdye project. Justin and Lu joined me toward the end of my retail odyssey; we left lugging large, white bags oozing with tasty bargains: 5 pairs of shorts and some boxers for Noah, a Lemony Snicket and a Goosebumps book for Artie (I had to pass on his fave Warriors books…we’ll leave those for someone who isn’t on a public education salary), an alarm clock for each kid because getting them out of bed each morning is a test of my very sanity, a travel Scrabble because Justin and I are both such healthy competitors ::cough::, a post-apocalyptic Risk game, some red mary jane Keens for me, and some Junie B. Jones books for Lu.

I would be remiss if I failed to mention the dream tent. Lucy has a problem with crawling out of her bed and into ours, which was super adorable like three, two, or even one year ago. No, really more like two years ago. As much as we both love having her giant feet wedged all up in our spinal columns, a growing girl needs her own space. A while back Justin had the bright idea to pick her up a dream tent, which he had seen on TV, but we can barely remember to check the mail, let alone go all the way to the store and purchase something we only think about when we are realizing how sleep-deprived we are. Luckily, there were a couple of them at the JBF sale for $10 each, and we nabbed one with a winter scene. Y’all, Lucy is beside herself. She curled up in that little thing and read Junie B. Jones to her plushies until she passed out the past three nights, which translates to three beautiful sleeps sans kidney beatings and getting hotboxed by Dutch ovens of first-grade-level proportions.

In the final assessment, JBF was what it always is, a marathon of well-organized chaos, a way to help out the environment and put your cash back into the hands of community fams instead of dumping it into soulless multinational corporations, a frenzied thrill of secondhand shopping. If you’re planning to go, pack a canteen and take a friend.

Happy hunting in the Coffee Nebula!