Jody McIntyre has a deep love for Tulsa. She grew up in Tulsa, raised a family and continues to serve the city in her new role as membership manager of Circle Cinema. The Circle, as it’s often referred to by locals, is a treasured historical movie theater. As a lifelong movie lover, Jody fits right in. Her love of the entertainment industry gave her the courage to move to Los Angeles at a young age where she worked for a television and movie production company. 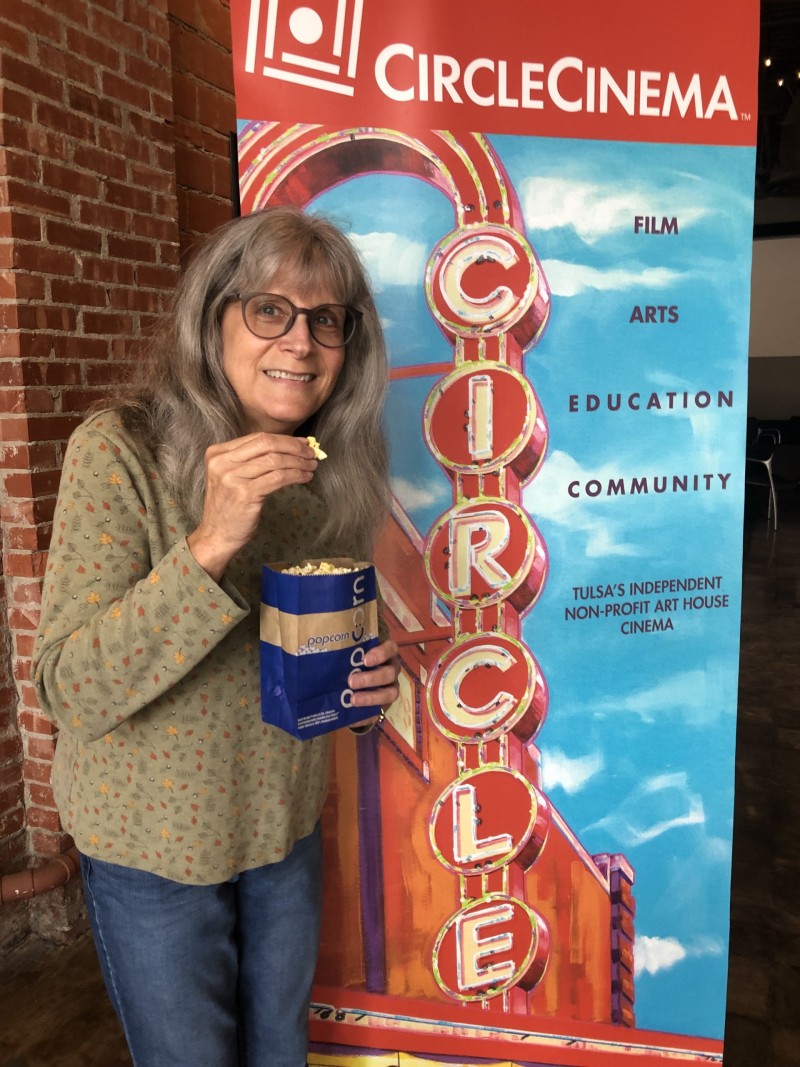 Her time in California added up to over 25 years, but after having children, she knew she wanted to raise them in her favorite city and moved back to Tulsa. She has spent the past 18 years working as an executive producer at a local television station and recently transitioned to Circle Cinema.

TK: Tell us about growing up in Tulsa and a little about the passion that took you to Hollywood.

Jody: My family moved to Tulsa when I was in third grade. I graduated from Edison High School and attended The University of Tulsa for one year but realized that college wasn’t something I was good at. I really had always wanted to move to Los Angeles, so I quit school and moved to LA. My parents were very nice about me leaving school.

TK: What did you do in Los Angeles?

Jody: When I was a kid, I loved movies, but after high school I worked at Channel 6 for Clayton Vaughn. I realized that I enjoyed television, too. I thought I wanted to work in films, but after working for Channel 6, I looked for a job in television. Once I moved out to LA, I got a job at an answering service to pay the bills, but I found one place that I really wanted to be – Norman Lear’s company. I would call every Monday and, finally, after six months, the day I called, the receptionist happened to be out, and they told me to come in.

TK: What did you do for Norman Lear’s company?

Jody: My first job was as a receptionist. I would sit at the reception desk and practice typing scripts so when an opening became available working for writers, I would be ready. I was able to move into working with writers and typing scripts for popular television shows like The Jeffersons. I worked for that company for about 10 years. Two of the writers I worked with were the writers on the I Love Lucy Show. The people I got to meet, work with and absorb things from were great. I wouldn’t trade that opportunity for the world. I knew I was lucky to work with those people and those shows. It was amazing, and I am so grateful that I had a chance to be there for that opportunity.

TK: What did you learn from your time in Hollywood that you brought back to Tulsa?

Jody: I learned that if you’re working for amazing people, you’re going to learn amazing things. I learned to really love the Los Angeles Dodgers and how to drive really fast! I also developed an acute sense of sarcasm.

TK: What advice would you give to others who are thinking about taking a big leap to follow their dreams?

Jody: Don’t be afraid of it. As you do it, and when you land somewhere, take stock of who you’re around. Try to choose to be around people you want to learn from. And choose wisely because those people will always give you a chance to grow. It’s very important to surround yourself with the right environment. I was able to watch the people I worked with pursue a career that they enjoyed and recognize the joy that it gave other people. I always worked for people who felt that way. If you’re happy in what you do and you’re making a positive difference, it doesn’t get any better than that.

TK: What made you decide to return to Tulsa, and what did you do once you returned?

Jody: I returned a couple of times. The second time was to move back to Tulsa after having twins. We wanted to raise our kids in this city away from LA.

TK: The mission of Circle Cinema is “Community Consciousness through Film.” Can you tell us more about Circle Cinema and what it offers?

Jody: It opened in 1928 and started with silent films and then almost immediately started showing “talkies.” It’s Tulsa’s only independent art house. We show art films and documentaries and bring in a lot of speakers. We also show mainstream movies.

TK: As the new membership manager at Circle Cinema, what do you enjoy in your new role? Can you share some information about family memberships?

Jody: Before the Circle, I was an executive producer at Channel 8 for Good Day Tulsa. I enjoyed serving the community in that role and now at the Circle, I’m able to do the same thing. You get to meet members and help others get to know about the Circle. It’s another way to serve the community.

We just started offering a Family Membership for $150. It includes two adults and three kids (under 18 years), and you get the chance to take your family at a discounted rate. Everyone receives a complimentary box of popcorn, too. This is a wonderful opportunity because you get a chance to bring your kids to some great entertainment and enjoy some quality family time. There are great speakers, documentaries and films that will help kids learn a little more about the world and open their eyes to new information.

TK: ‘Tis the Season! It will be a White Christmas at Circle Cinema with a program you started several years ago. Can you tell us more about that?

Jody: I was on the board of directors for the Circle for many years. During that time, Circle decided to do a White Christmas Sing-Along, and I mentioned to them that when I lived in LA, I would get together with friends and do fun choreography, look for bloopers and, of course, sing! They asked me to emcee the White Christmas Sing-Along event, and I agreed. That was several years ago. We have a great time! I ask trivia questions and tell the audience about all the bloopers in the movie to watch out for. It has grown in popularity, so there are 10-12 sing-along shows, and then we have some showings of the movie only. It’s become a tradition for many to attend and has grown over the years. This is a fun, family-friendly event!

TK: I know you have a love for the movies! Can you share what your favorite movie is?

Jody: I have several! My very favorite film is How Green is my Valley from 1941 directed by John Ford. I also love Princess Bride, and The American President. Oh, and I love, love, love, Casablanca!

TK: In wrapping up, what do you enjoy most about living in Tulsa?

Jody: The people. And I just think Tulsa is a wonderful place. It was a wonderful place for me to raise a family, and it’s just a great place to live. I know when people visit for the first time, they are surprised to find how beautiful Tulsa is and how friendly our city is! I love living in Tulsa.

For more information about Circle Cinema, including show information and Family Memberships, visit CircleCinema.org or call 918.582.1929.

Jody had the opportunity to babysit a child who grew up to become a major star! If you’d like to find out who that is, listen to the audio version of this interview on the Sharing Passion and Purpose Podcast. Access it on favorite podcasting platform or directly at SharingPassionandPurpose.com.

$150 – includes discounted tickets for two adults and three kids (under 18 years). Everyone receives a complimentary box of popcorn with ticket in addition to other member perks. Your membership supports the Circle Cinema Foundation and its mission.

Nancy A. Moore is a Public Relations Coordinator at Montreau and Adjunct Professor at Tulsa Community College. She has been writing for TulsaKids for almost 20 years. 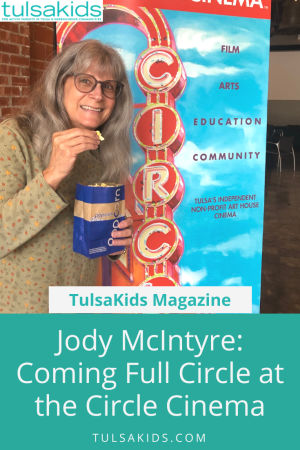