Is It Time to Ditch the Nap?

Three signs that your toddler may be ready to stop napping

Well, we’ve all heard the expression ‘all good things must come to an end,’ right? It proves true in many cases like good books, beach vacations and chocolate cake…sooner or later, good stuff ends.

We could add something else to that list – naps. It’s true, these midday siestas that were (or perhaps are) a regular part of your child’s life will gradually decrease, and at some point in your little one’s toddlerhood, they will stop altogether.

Oddly enough, toddlers don’t turn their nose up at napping because they suddenly need less rest – changing sleep patterns are the real culprit. According to the American Academy of Pediatrics, a baby’s urge to sleep builds up faster than a toddler’s or preschooler’s, so a baby gets tired earlier in the day. By the toddler years, a child’s urge to sleep earlier in the day weakens, allowing him to stay awake longer. Consequently, your child’s need to nap may come and go as his body adjusts to a more adult-like sleep pattern. But biology isn’t totally to blame here — there are a few temporary factors that trigger naptime battles.

Independence. Toddlers love to be in control, so it’s no surprise that they’ll refuse to sleep on your command. Plus, kids this age are so active and curious that they hate the idea of taking a snooze break.

Lack of sleep. It’s hard to believe, but overtired kids may have trouble falling asleep. That’s because when toddlers get tired, they often become irritable and hyperactive.

A major change. Any stressful event — moving to a new house or switching to a big-kid bed, for example — may make your child feel too anxious to doze off easily.

But how do you know when your toddler is ready to drop the nap completely? The answer is really dependent on each individual child. Some toddlers are finished napping by age 2 and others will continue to nap past age 5. However, the American Academy of Pediatrics indicates that the average age for toddlers to stop napping is sometime between ages 3 and 4.

So, even though you know the averages, how can you be sure that your child is really ready to drop that nap? Be on the lookout for these three signs that your toddler is ready to stop napping:

Instead of the normal fuss-and-go-right-to-sleep routine, your child‘s naptime resistance may go into overdrive. He may keep getting out of bed, whine endlessly about not wanting to take a nap, or not fall asleep at all.

Kids who are ready to give up daytime dozing will be able to maintain a generally stable mood all day without a nap. Obviously, your child will have normal ups and downs, but for the most part, he‘ll be in good spirits and will have enough energy to make it from morning to bedtime.

If, even without a nap, your child sleeps well all night, and usually wakes up on his own and in a pleasant mood, that may be an indication he’s ready to be nap-free.

Regardless of your child’s nap schedule, your main concern is to ensure that he gets enough sleep in a 24-hour period. Studies have shown that at age 3, for example, kids need anywhere from 10 1/2 to 15 hours of sleep. When he logs those hours is less important. In fact, many toddlers who stop napping during the day will compensate by sleeping longer at night anyway. 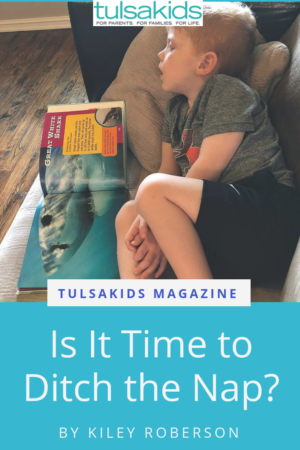