Because Daniel was out of town for four days last week, I took the opportunity to do some special activities with Joss, including Disney on Ice and a trip to Ida Red, where he got to pick out some candy from the bulk bins for the first time (not, of course, the first time he’d asked to do so!). On Friday afternoon, after several of working at home while Joss was in school, I impulsively decided to purchase tickets to the Imagination Series performance of “Diary of a Worm, a Spider, and a Fly,” which was performed by the Dallas Children’s Theater. The Imagination Series is sponsored by the PAC Trust.

The Imagination Series is specifically designed to be an affordable, fun way to introduce kids to theater. (It is related to the PAC Trust’s Young At Art series, which consists of the same shows but is targeted to students: public, private and homeschooled. These Young At Art performances take place in the morning, and tickets are just $5 each.) Tickets for the Imagination Series performances are $10–or, for an additional $5 per ticket, you can enjoy the Family Fun Pre-show (new this year!), which includes themed food and activities. Because this seemed like a simple dinner option, I opted for the $15 tickets. Also, the shows only run for about an hour, which is about Joss’s limit.

Quick note: I just realized that there are Study Guides for each of the Imagination/Young At Art performances. These would be a great resource for parents or teachers wanting to discuss the shows with their kids before or after the performance. For example, the Study Guide for “Diary of a Worm” includes information about how plays work, defining words like “cast,” “director,” etc. It also suggests some activities like making paper bag insect puppets that could be used to create your own performance. Two of the Imagination/Young At Art performances this year are math/science focused (ArcAttack and Professor Smart), so these Study Guides include explanations of the mathematic/scientific principles the kids will encounter during the show. Very cool!

The Young at Art/Imagination series take place in the John H. Williams Theater, which, after several confusing minutes, I learned has an entrance from 2nd Street, not 3rd Street. So if you show up at the PAC and are wondering why the front entrance is locked when there’s supposed to be a dinner and activities waiting for you inside, that’s probably why 🙂 But we made the most of it with a mini photo-shoot. 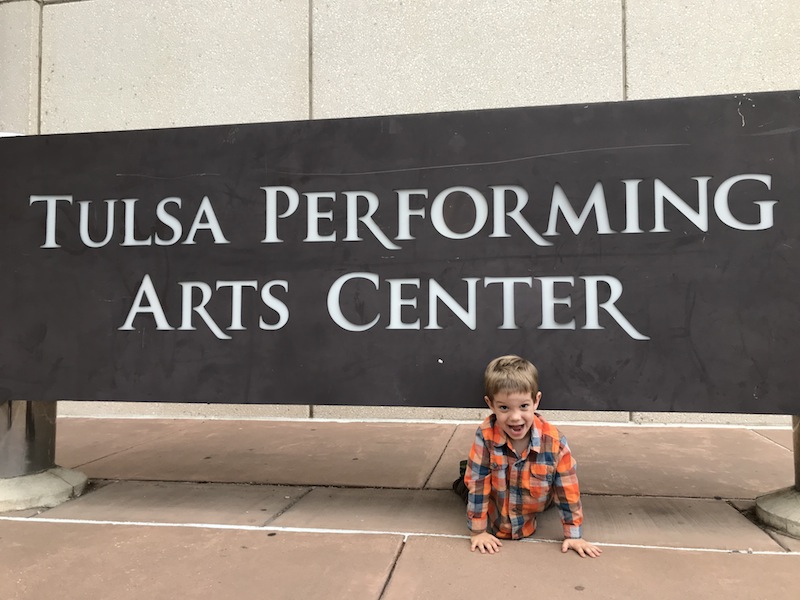 Ready for the Show!

Once we finally found the correct entrance, we headed down the stairs and easily found the theater where the Family Fun Pre-Show was taking place. First, we had to walk down a narrow hallway that had been decorated with colorful lights and spider webs–this was probably Joss’s favorite part of the entire evening, to be honest. He would have been happy just running back and forth through this hallway for two hours. 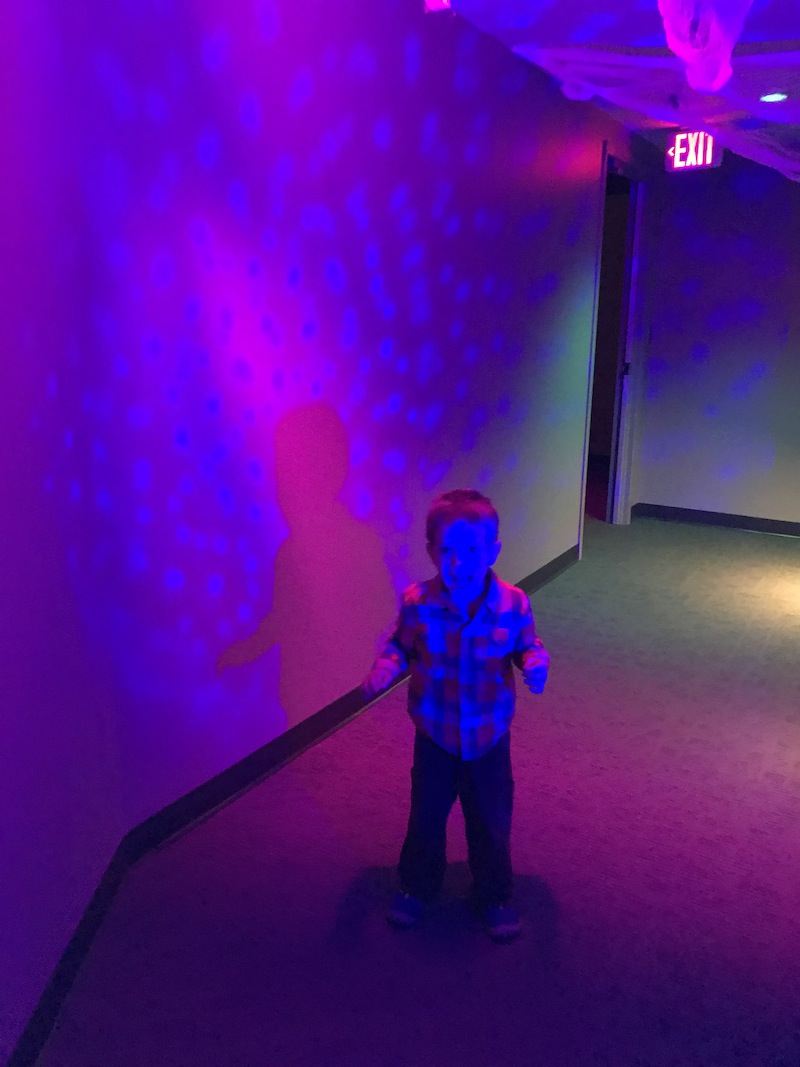 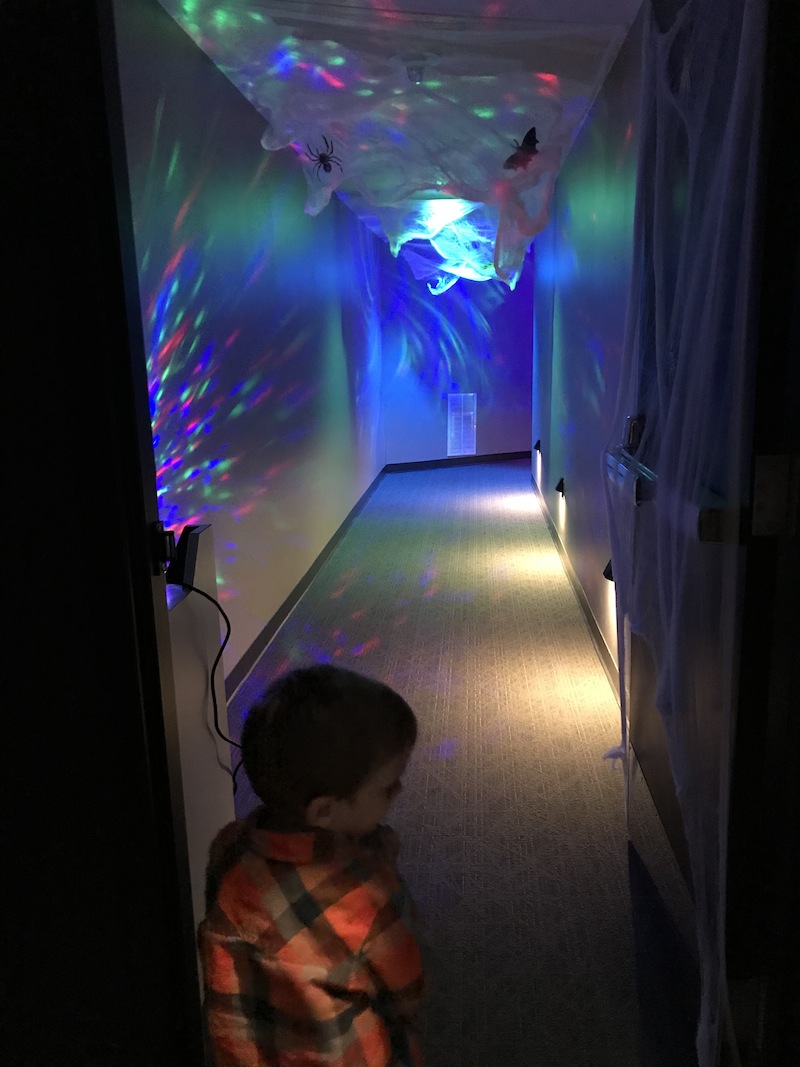 At the end of the hall, we were greeted by a room full of round tables with craft supplies in the middle. To the side were two buffet tables, one for drinks (Spider Egg Punch) and one for hot dogs. There were also several helpful PAC employees who were there to direct people, serve food, explain the crafts, etc. 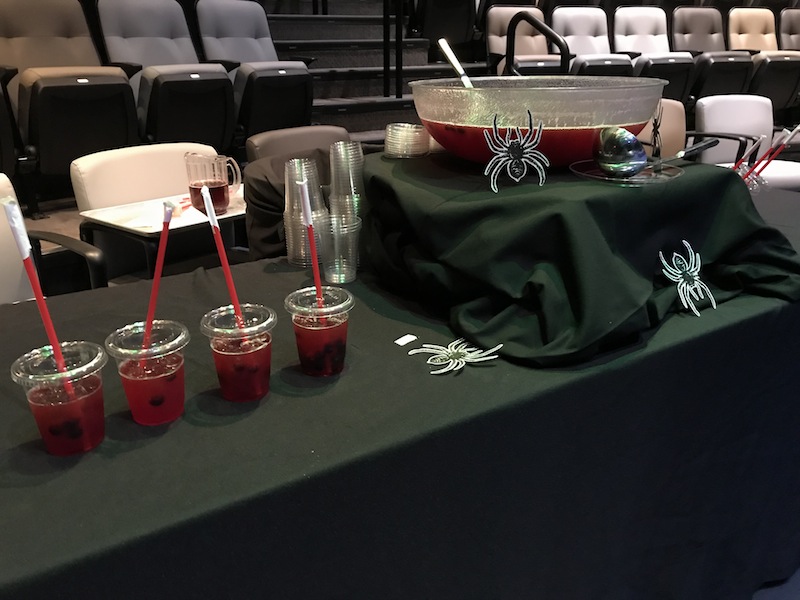 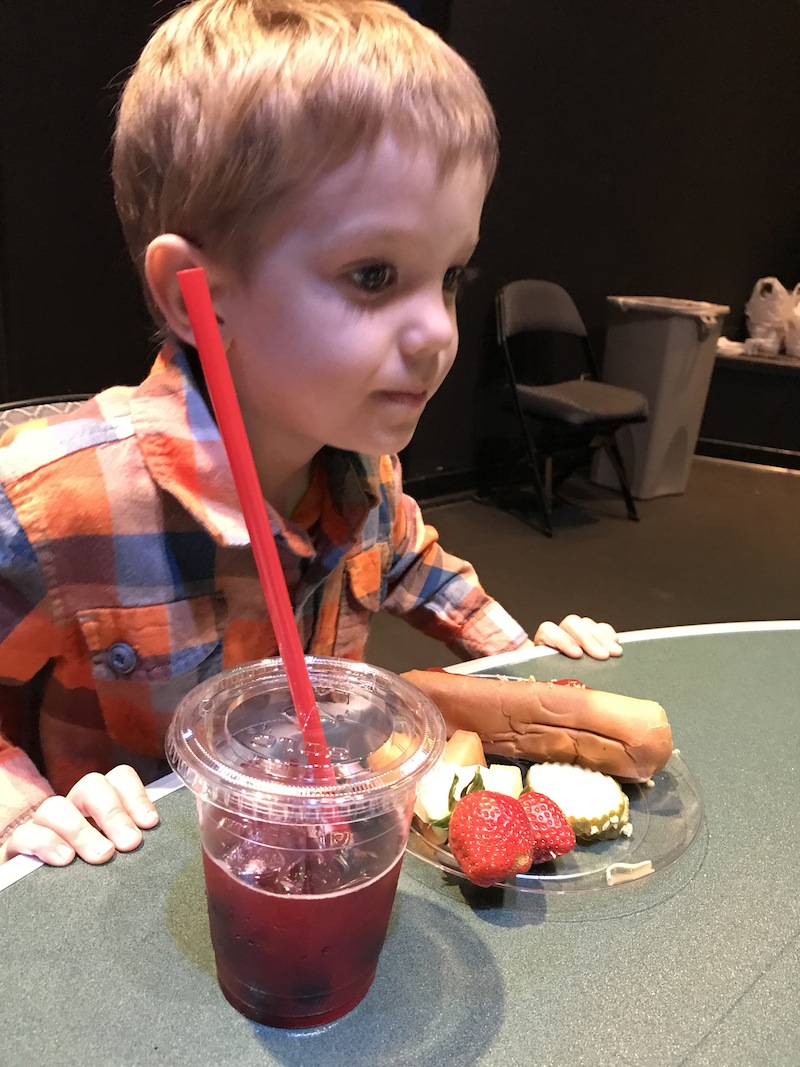 The crafts for “Diary of a Worm” were making spiders out of styrofoam balls and pipe cleaners and caterpillars out of colored puff balls. Very cute and simple. 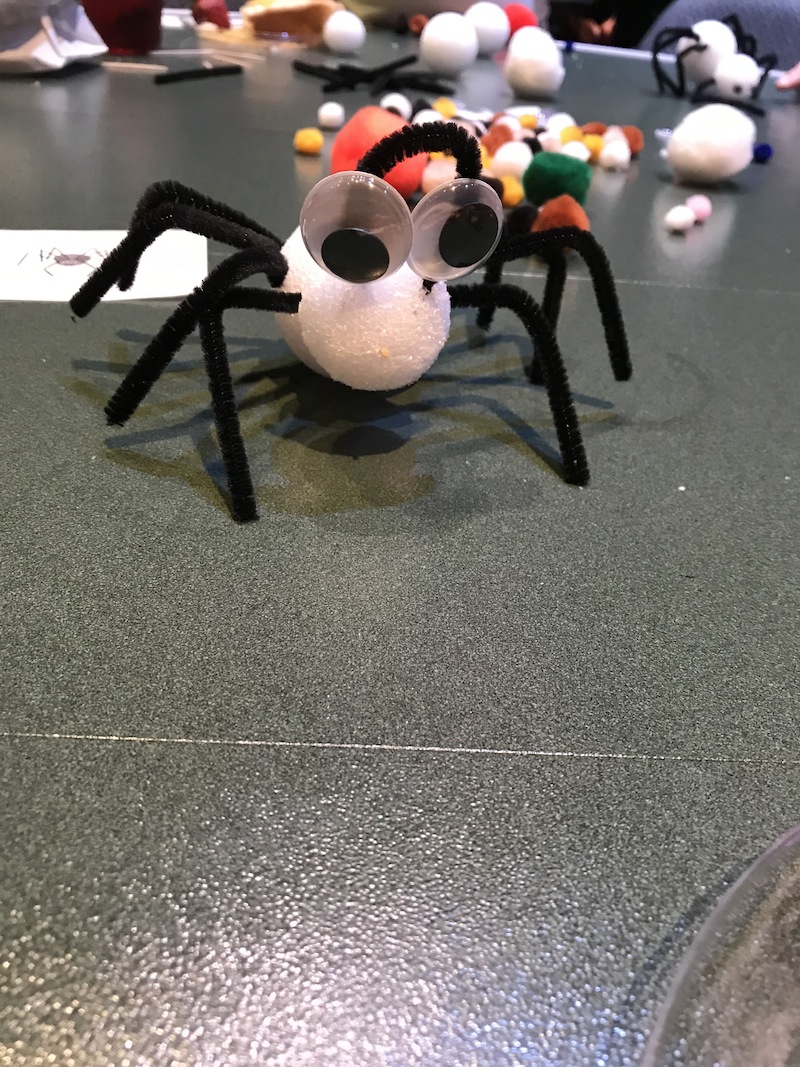 After an hour, it was time for the performance! “Diary of a Worm, a Spider, and a Fly” was both adorable and educational. The singing and dancing was very engaging, and the sets were fantastic. And facts about insects were integrated into the entire performance. The main theme was that even small creatures can do big, important things. Worm doesn’t think he has anything to say in his “All About Me” report at school, but by the end of the play, he’s come to believe that worms are awesome because they help the Earth! Also, Fly dreams about becoming a superhero but is told that she can’t because she is too small and a girl. But she proves everyone wrong and is very proud to become Fly Girl! 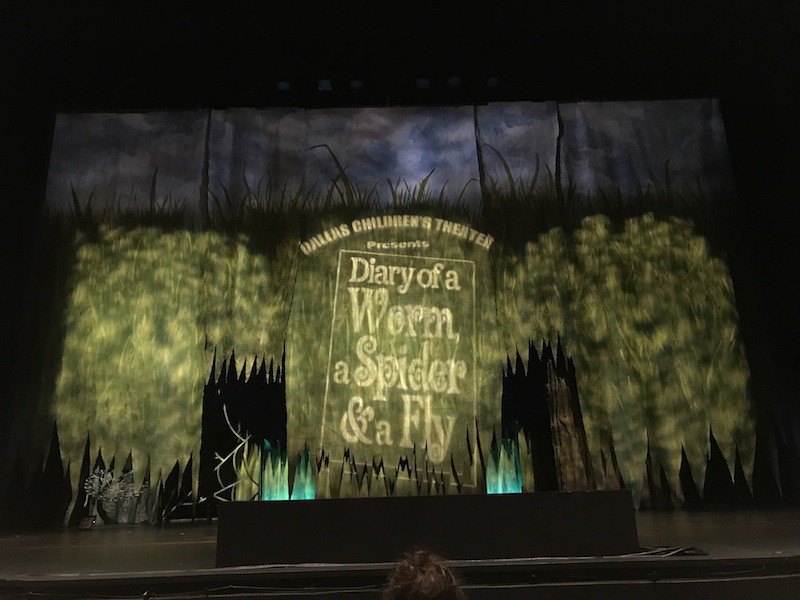 One of the nice things about going to a performance specifically for kids is that you don’t have to worry quite as much if your own child makes a little noise here and there (or decides to take off his shoes/socks, etc.). It would probably be a good idea to discuss concert etiquette beforehand, although in Joss’s case, I’m not sure it would have made much of a difference. Because we’d gone to Disney on Ice the night before, he hadn’t gotten to sleep till 10:30 p.m., and two performances in a row were a little much. 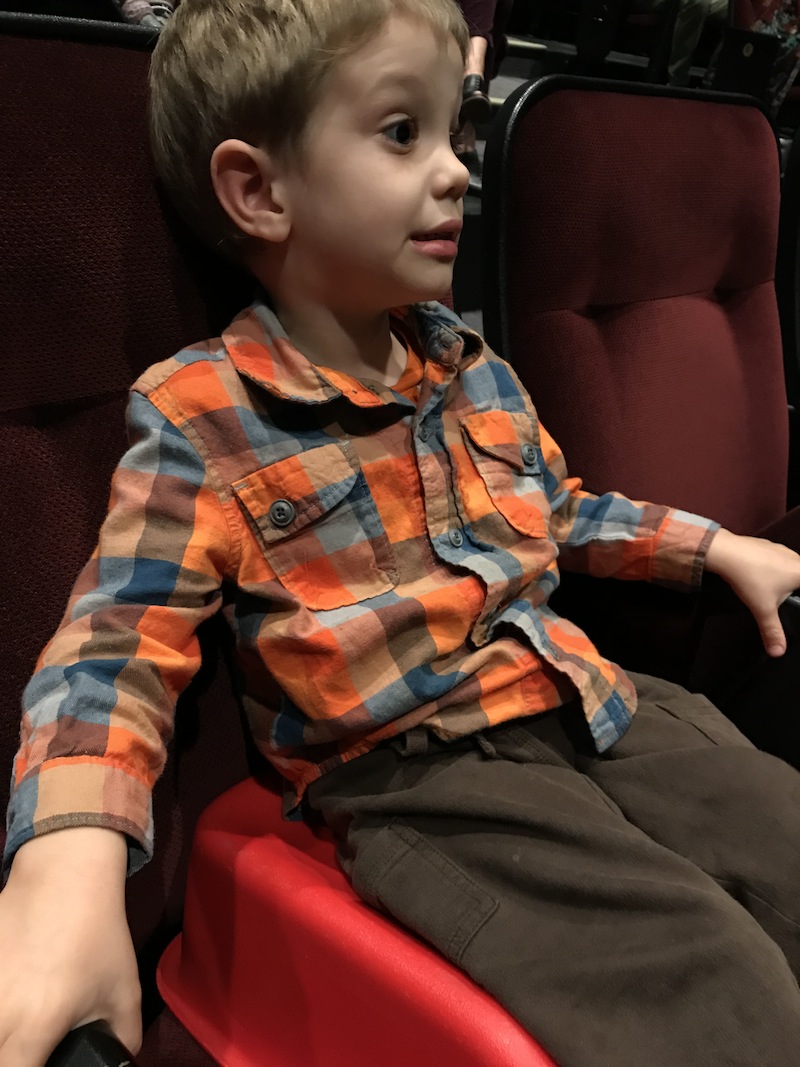 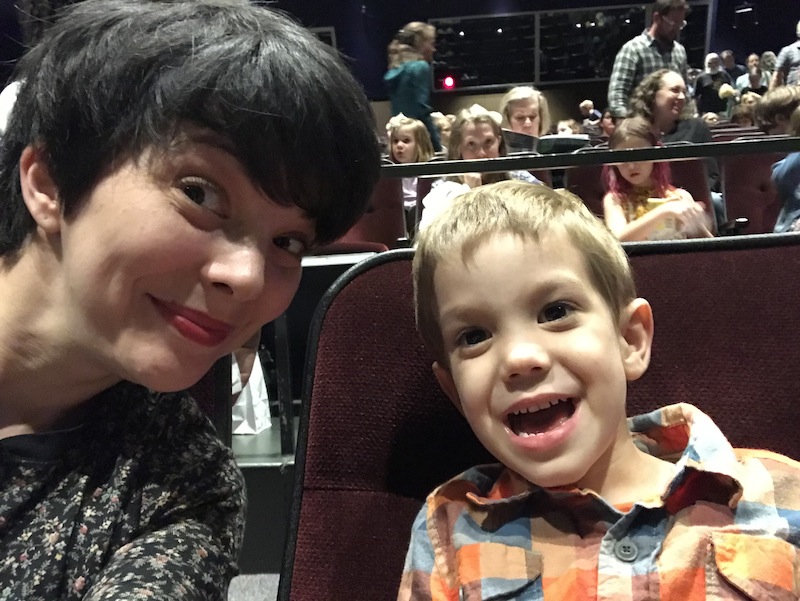 After the performance, everyone had the opportunity to meet the cast members and take photos! At least one girl brought a sheet of paper so she could get autographs as well. Joss chose to meet “Spider.” 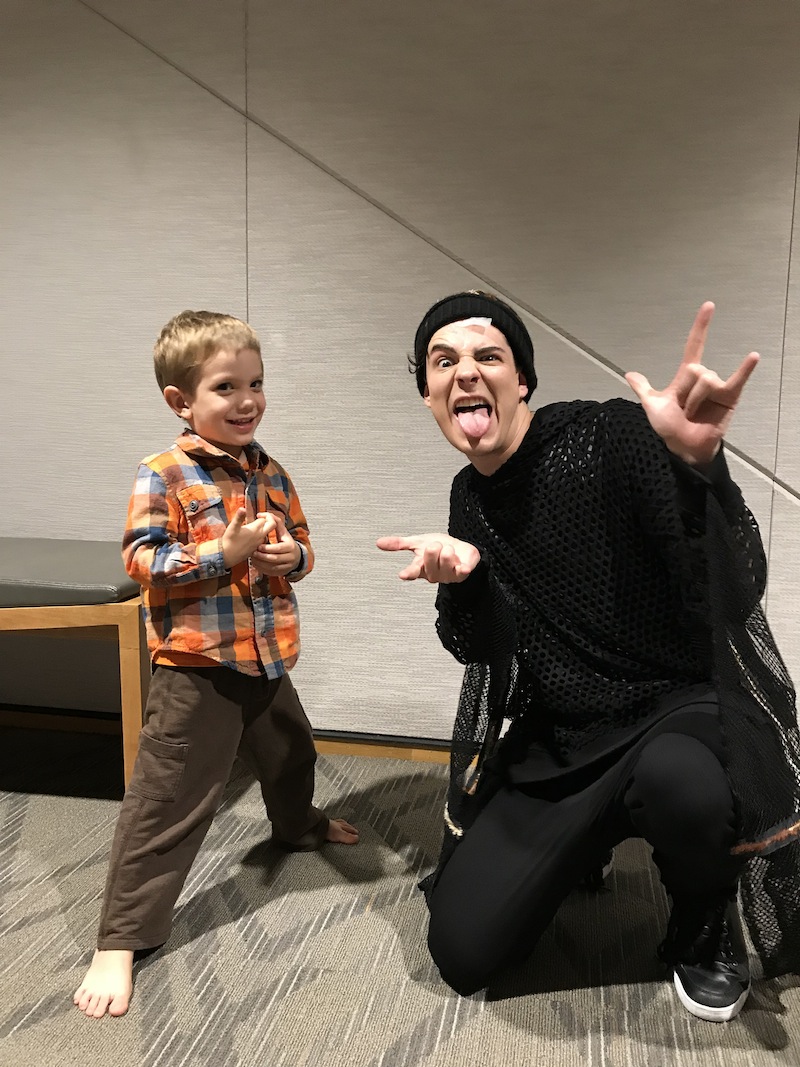 Joss immediately burst into tears following this picture because he had wanted to take a “smiling” picture rather than a “scary spider face” picture. So I had to decide whether it was just time to leave or whether to wait till the crowd thinned out to try to get a picture he was happy with. (Went with the latter option, so now I also have a selfie of Spider and myself smiling while Joss glares at the camera. Oh well.) We had a nice talk on the way to the car (while he continued to sob) about how Spider didn’t know he didn’t want a spider-face picture and he didn’t mean to make Joss sad. Sigh. All in all, however, it was a terrific evening, and I highly recommend the Young At Art/Imagination series, complete with the Family Fun Pre-Show.

From the PAC Website: “Creators of the original Singing Tesla Coil, the crew of ARCATTACK use their high tech wizardry to generate a truly “electrifying” performance. Combining their love of rock music and their love of science, this is a show you will never forget!”

From the PAC Website: “The literary classic Alice in Wonderland is transformed into a live musical adaptation using actors, life-sized puppets and a digitally projected, Live Virtual SetTM by Steve Axtell/Axtell.com. This production arms children with strategies and the understanding of how to empower themselves in their lives.” 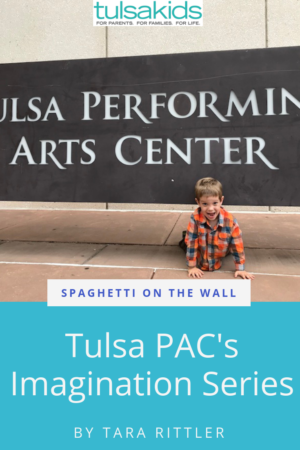