Interview with Jalynn Steele of ‘The Lightning Thief: The Percy Jackson Musical’

Although my husband might disagree, I’m fairly certain the only thing better than geeking out over a fandom is geeking out over a fandom to musical theater. Last fall at Tulsa Pop Culture Expo, I was passing the Celebrity Attractions booth when a nonchalant little poster stopped me dead in my tracks. There it was in all its unassuming glory, a poster advertisement for the musical version of Rick Riordan’s “Percy Jackson and the Olympians: The Lightning Thief.”

Holy forking shirt, this was gonna be a cool show, and I knew exactly which kid would flip his little lid over it, too—the little bookworm who keeps getting in trouble for reading YA fantasy novels in class.

Based on the first novel in the Rick Riordan Percy Jackson series about a teen boy who learns he’s a Greek demigod, “The Lightning Thief: The Percy Jackson Musical” is the perfect marriage of two distinct fandoms: musical theater and Halfbloods.

I got to talk to Jalynn Steele, who steps into a few roles including Percy’s mom in “The Lightning Thief: The Percy Jackson Musical,” which will play on May 31 and June 1st at the Tulsa PAC. We spoke about the pressures of parenting a demigod, the world of fandom, and getting started in theater.

Percy Jackson is a fantastic metaphor for the not-always-visible magic of non-neurotypical children. Like many children who struggle with ADHD, dyslexia, or other neurological diversity, Percy comes to learn eventually that the neurological differences he’s struggled to fit into the world with his entire life are part of his most powerful gifts.

I asked Jalynn what it’s like to be the only mortal caught up in a world of incredible beings. After all, Sally dated a god and then had a demigod kid. And yet she doesn’t seem to have any trouble finding her own inner strength in all of it.

Jalynn: She kind of has powers of her own. She’s able to take care of Percy, and see when he’s struggling and is very protective of him…It’s a good thing. Though her powers may not be ‘godly,’ she’s got her own powers.

CN: I was thinking about how her kid has these issues to overcome. He’s got dyslexia—

Jalynn: —he’s got ADHD, and trouble seems to follow him everywhere he goes. In the opening number, we sing about six schools in six years, and he’s been kicked out of them. So not exactly a confidence booster. He’s sort of struggling and that’s when the Mom Magic takes over. She’s able to kind of take care of him and protect him up to a certain point. I think right when the story begins is right at the point where she’s like well, I need to make sure he knows he’s loved and he’s special within himself. He doesn’t realize how special he is. She sort of opens his eyes and lets him know that the things that make you different are the things that make you strong.

CN: And she stays with this super skeezy dude Gabe to protect Percy.

Jalynn: She does it to protect him. It’s all about her sacrifice. She’s gotta keep this horrible man around and sacrifices through to protect him and also to protect him from the truth at this point because he’s got to be old enough and ready enough to actually finally tell him, but then he’s taken away before she can say anything. It’s a little bittersweet moment. Sometimes you have to sacrifice for the greater good, especially when kids are involved.

But Sally is just one of the many hats Jalynn wears during the musical. I was a theater poser in high school, but the memory of my tenth-grade balcony scene monologue performance—tragic for all the wrong reasons—has left me with a lasting reverence for stage actors. When Jalynn casually dropped how many roles she plays, noting that some actors play up to ten roles, I was super impressed.

CN: You play how many—seven roles in this?

Jalynn: Seven roles total, yes. Sally is one, and then I play Selena, which is one of the Camp Halfblood demigods. She’s the daughter of Aphrodite. Then I also play the oracle which sets Percy on his quest to find the lightning thief. I also play Echidna, the mother of monsters. And then also Charon, the ferryman to the underworld…most of the folks in our show actually play several different characters.

CN: What’s the biggest challenge of playing all those roles?

Jalynn: The main one is that the fandom is so great and so big that you don’t want to mess those characters up. They’re reading the books at such a young age and their impression is sort of what’s set in their mind. So it’s a delicate balance between creating a new character but then staying true to the books. I know that I try to do that quite a lot because the fandom is so big, meeting that challenge of creating new but still staying true to the characters.

The second biggest challenge is there’s a lot of stage combat and keeping who I am and at what point. We kind of go back and forth and this way and that and it can be a bit of a challenge. But that’s also the joy of acting.

CN: When you first took the role in Percy Jackson, where were you at with your mythology? Because I would have to go take a class.

Jalynn: I ended up reading all five books. And they have this Percy Jackson Greek mythology chart online that’s sort of like who’s whose mom, and who’s his dad…Kronos, the Titans, and so on. Before then I knew very little. As I was reading the books, I just followed along with this little online family tree, and it was like oh, this makes sense. I could see this is why this is important and so on.

All in all, it’s an amazing story. It’s a really good story for those that are coming up and kind of feel like they’re the outcast and feel out of place. Because we all feel that. But to feel that and know there’s a character that you can relate to…that’s what Rick Riordan did.

CN: Before Percy Jackson, did you have any experience with fandoms?

Jalynn: Not really. I did “Rock of Ages” on cruise ships for a while, and there were some people who had heard of “Rock of Ages,” and there was one guy who had seen the show over a thousand times. But Percy Jackson was the first time I experienced fandom of this caliber, with so many people who know about it. It’s sort of like Harry Potter. It’s ginormous. I didn’t even realize how big it was. There’s kids that sort of live by this book and it means so much to them. That’s why it’s important that we tell the story right.

Like many parents of tweens, I’ve got a kid who has expressed an interest in show biz, especially with all of the great stage performances my kids are able to access on YouTube. With all these young kids getting their start so early, I have even wondered if eight years old was too late to get my kid started in theater. I asked Jalynn how she ended up onstage.

Jalynn: I did like Bible school plays as a kid and kind of felt like that was a fun kind of hobby thing for me for a while. But it wasn’t until college when my Dad actually asked me a really good question. I was trying to decide what to major in and what I wanted to do, and he sort of asked me, “If somebody called you into your job at 3 AM, what would you have no problem doing?” And I was like, “I have no problem performing.” That was kind of the catalyst that helped me. And I wouldn’t mind getting out of bed for it.

Jalynn: Yeah, it was kind of the thing that set everything off. At that point I knew I wanted to act, sing, and dance and all that stuff.

CN: Are there any roles that are hard to say goodbye to when the tour is up?

Jalynn: I played the sort of mama figure in “Rock of Ages” a couple of times with Norwegian Cruise Lines and that one was one that I was really sad to say goodbye to. But really all of my mom roles. Not only do I kind of mother onstage but you know, backstage, I’ll be like, “Oh no, this person’s gonna run off and they need tissue!” That sort of thing.

CN: And as a mom, one of the things that’s on my mind is how you manage self-care when you’re on the road.

Jalynn: It is a delicate balance. Some days you have time, but then on travel days when we have to get up extra early, at that point, sleep becomes the priority. But usually I’ll get up and just try to take a moment of breathing and meditation, say a little prayer for the day, and just make sure I get that alone mind time. It might not even be in the morning. Sometimes it’s just sit down when everyone’s calmed down and take those two minutes, and it might not even be two minutes, but it’s something to stop, breathe, realize where you are, what’s going on, and know that it’s gonna be okay.

CN: Did you ever have a fandom or a TV show you identified with?

Jalynn: I did enjoy some and wanted to see what happened, but I was never like Team Edward or anything like that. But I really loved the Care Bears. I watch a lot of ABC Family…any of those heartwarming sort of family things resonate with me.

When I searched online, I learned that fans love meeting Jalynn because she’s super sweet about taking time out for Halfbloods and signing autographs. I realized if all of the cast have Jalynn’s commitment to connecting with the fandom, it’s going to be an amazing show.

Check out the Celebrity Attractions show at the Tulsa Performing Arts Center next weekend. Buy your tickets online here and then tag us in your Instagram pics after the show at #coffeenebula and #tulsakids. 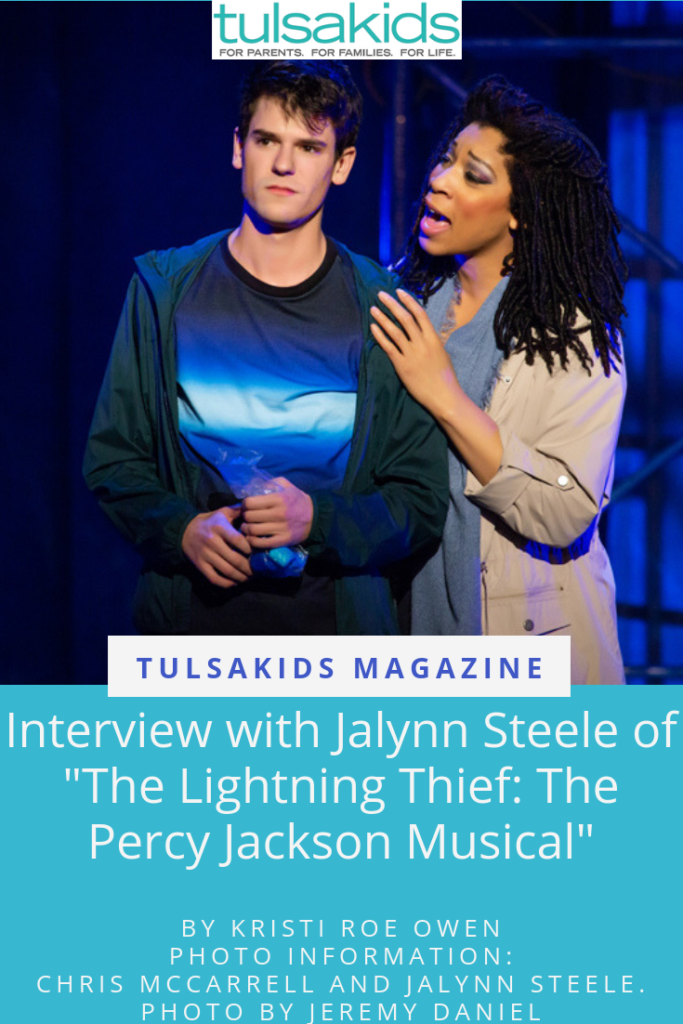