Compassion and passion is what makes up Sienna Leach, a 14-year-old Jenks freshman. At a young age she had a passion for paleontology, which eventually lead her to a new passion — birds. Sienna’s compassionate heart and love for birds inspired her to build an aviary right in her own backyard.

TK: At what age and how did you develop a passion for birds?

Sienna: When I was 3 years old, I really liked dinosaurs. I eventually discovered that birds were descended from dinosaurs, and my obsession switched to birds. I enjoyed actually being able to see live birds, and I realized that I am able to help them, as opposed to dinosaurs, which are extinct. I’ve been rehabilitating birds with WING-IT (Wildlife in Need Group – In Tulsa) since I was 7 years old.

TK: What is an aviary?

Sienna: An aviary is a large enclosure in which we keep birds while we are rehabbing them, before their release back in to the wild.

TK: What have you learned from having your own aviary?

Sienna: I’ve learned more about birds and their habits, and also that each one has an individual personality. I’ve also learned how to cope with loss and grief, but also the joy of releasing a bird back to the wild and watching it fly away.

Sienna: I had a Western Kingbird, Lemon, and an Eastern Kingbird, Polar, at the same time. It was my first time to rehab both species, and both are now some of my favorite bird species. They liked to hang around each other, and so we ended up releasing them together. They hung around our house for around a week after release and begged for food. Polar would frequently land on my head to try to get me to feed her mealworms, while Lemon preferred to sit on a nearby object and wait patiently. We would hold mealworms up in the air and they would swoop down and get them from us. It was really cool to interact with these two, especially having both types of kingbirds found in the area.

TK: Where is your favorite place to bird watch in Tulsa?

Sienna: Oxley Nature Center and Lake Yahola in Mohawk Park. This area has the most birds recorded in it out of all of Tulsa County.

TK: What other hobbies do you have?

Sienna: I like to read, I play percussion in band, I’m in the Jenks Latin Club, and I love learning about animal color/pattern genetics.

Sienna: I want to be an ornithologist, which is a scientist that studies birds. I will also continue my wildlife rehabbing volunteer work.

Sienna: Kenn Kaufman is a famous birder that inspires me – I’ve read his book, Kingbird Highway, at least 10 times! Kim Doner, another WING-IT rehabber, who is actually the person that taught us how to rehab birds, is another huge inspiration. Lastly, the birds themselves really inspire me to help and protect them!

TK: What advice do you have for others that want to learn more about birds?

Sienna: Become a bird rehabber! WING-IT, the rehabbing organization we work with, is holding the annual Intro to Rehabbing on April 13 from 1-4 p.m. at the Hardesty Library. You have to learn a lot about birds to be able to properly take care of them, such as what they eat and their habitats in the wild. Also, join the Tulsa Audubon Society and attend the monthly meetings and field trips that we hold. You can learn a lot by going birding (bird watching) and observing birds in the wild as well. I’ve also read a ton of books about birds, and that’s how I know a lot of the things that I know about them.

Sienna: I actually don’t eat any poultry because I love birds so much, but, more importantly, I have rehabilitated 550 birds! 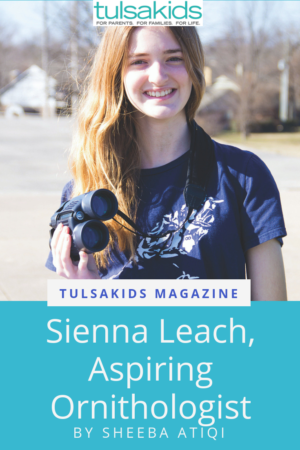